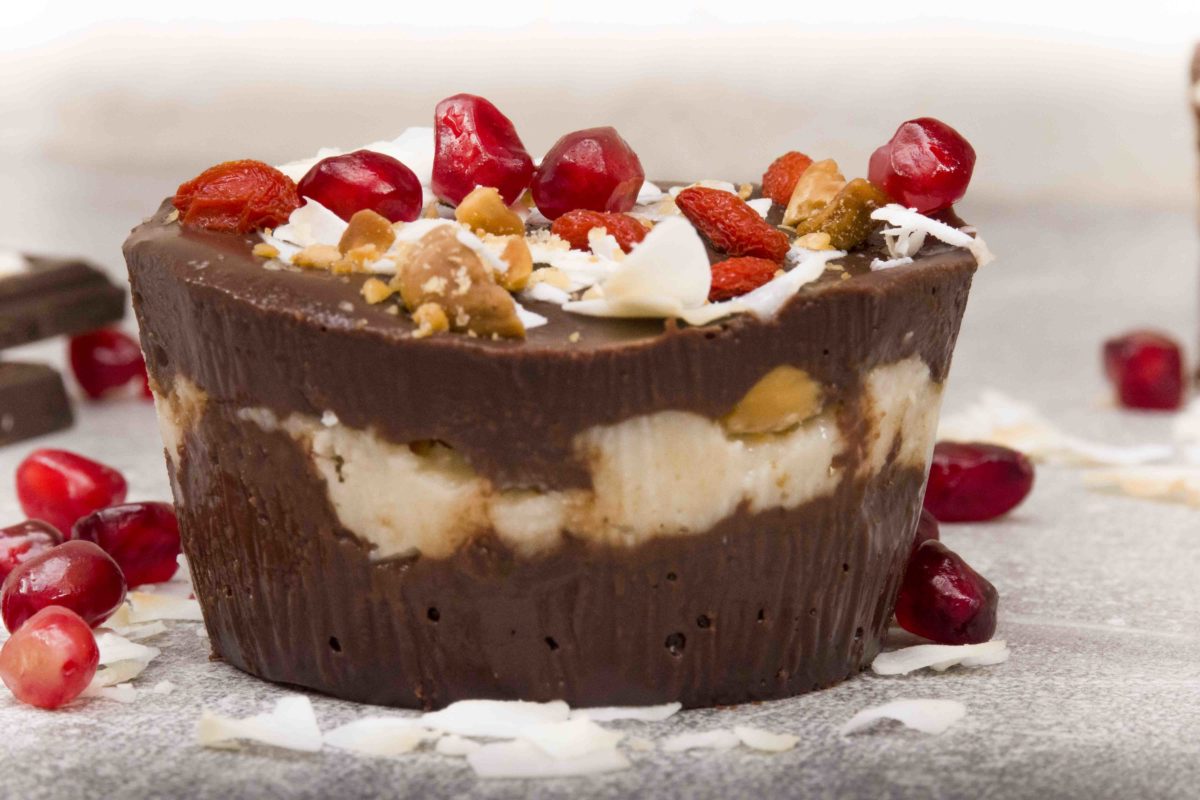 This is something completely different from everything you’ve tried before. The cake is top-notch and is worth every minute you devote to it. For me, it is considered a ‘must make’.

It consists of two parts.

The white one, which is made of ‘condensed milk’ (don’t be discouraged, I am going to explain to you in details what every ingredient is, they only have difficult names, but are easily prepared), munch mellow and coconut, i.e. coconut flour.

I love using Nestle 52% coco, and it hasn’t disappointed me so far. I don’t put the milk one because this one isn’t so strong or bitter.

Of course, you can always advance every recipe and add something to your liking, this time I added baked bananas, yum, yum…

What is condensed and evaporated milk?

It is common in recipes in English to ask for both.

In both cases, 60% of water is removed from the milk. The only difference is in sugar. Condensed milk contains approximately 40% of sugar, and evaporated is without sugar. One cannot be used instead of the other in recipes because of the caramelized sugar flavor in the condensed one.

I mean, you can do anything, but you’ll just get a slightly different flavor.

Condensed milk is characteristic for the American continent and the warmer region, because the plain milk was hard to preserve because of the high temperature. I couldn’t find condensed milk (update: I founded Greek milk in can for coffee) in our stores, but it is very easy to make substitute for it, so I didn’t try to look very hard.

Now, well, someone is going to say that what I made myself is not condensed but concentrated milk, but that is not important, because it fulfilled its role anyways, and the cookies were gone in less time than it took me to make them. If you wanted to make evaporated milk, then add sugar in the end and get condensed, all in all, everything is possible, but you’ll lose the caramelized flavor to some extent.

Combine all ingredients and put them in blender, and mixt them until it thick enough (around 2 minutes). If the milk is too thick, add some more boiling water and mix it for a couple more minutes.

Longer variation (always better, if you have time, and it lasts around 2 hours):

Put 1 liter plain milk in a wider dish onto the stove. Let milk cook at higher temperature at first (with constant stirring), and then lower the temperature and let it cook until the amount decreases to half of the original amount. Put a bag of vanilla sugar and additional 150gr of plain crystal sugar and you’ll get the needed cookie mixture (I put sugar before milk to get a slightly caramel flavor and it was great, just make sure it doesn’t burn).

Evaporated milk preparation is the same just without sugar.