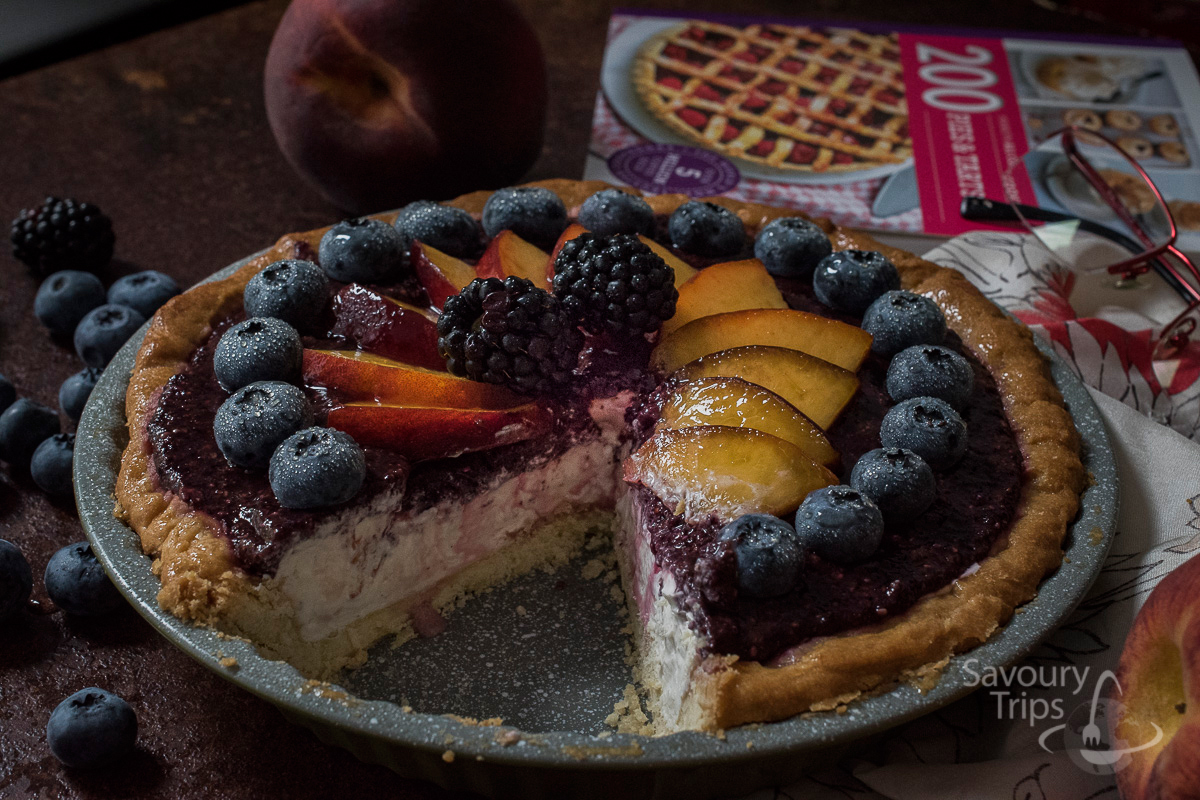 I wanted to write this cheesecake recipe with blueberries and quinoa  as soon as possible because it’s fantastic. You should make use of the fresh blueberries season. But I think it can be good enough with frozen blueberries as well.

And now a cheesecake recipe

How to make the crust?

The recipe for the tart crust that I make most often is so simple and there’s no room for mistakes.

What you need is flour, cold butter, salt or sugar depending on what you’re making – a cake, or something salty, a yolk and water. 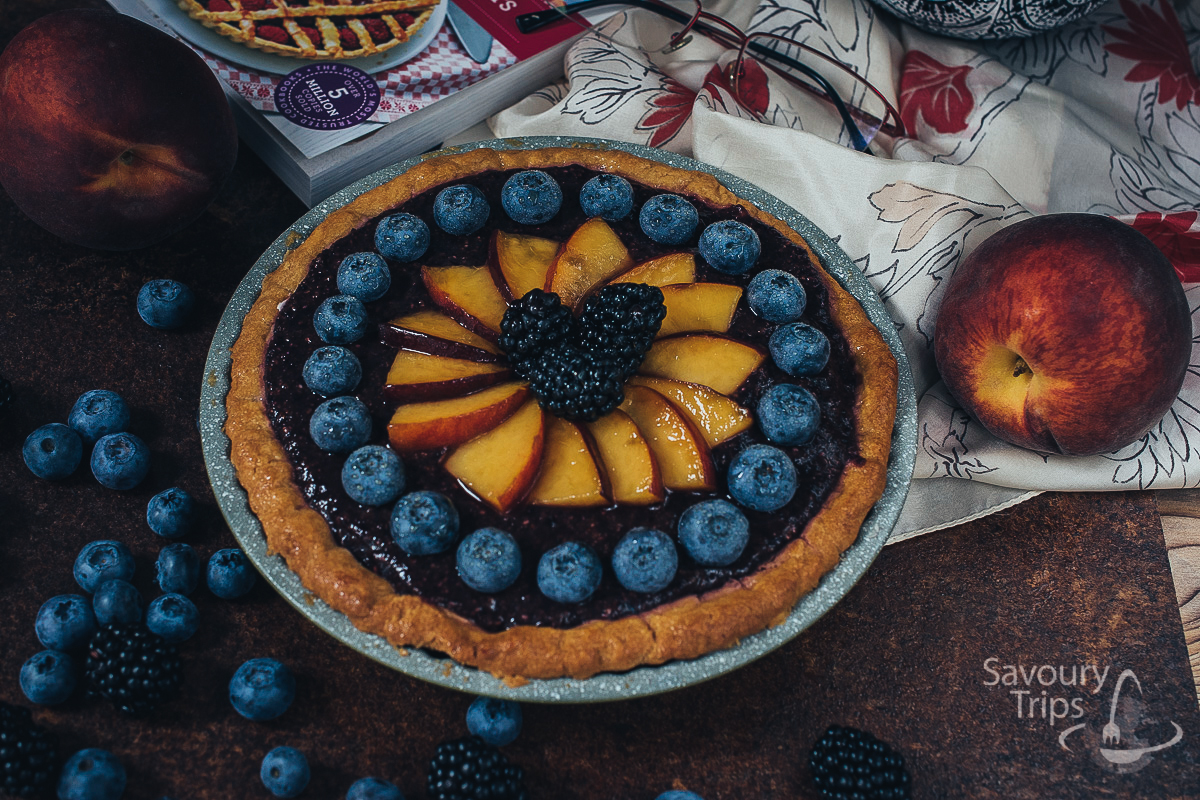 I mixed flour and powdered sugar together and added cold butter in cubes. Then I rubbed in the butter into the flour using my hands to get sort of a grainy mixture. You can use a mixer for sure, but I like the feeling of rubbing the cold butter in the flour.

In the end, I always turn the mixer on to finish my work. Then, after making a few circles with the mixer I add yolk, make another circle or two, and then I add water, too.

You should use the mixer until a dough ball is formed. If you have made a mistake in the recipe up until this point and notice that the dough ball is not forming itself, turn off the mixer and use your hands.

Then, put the ball into a transparent foil and put it in the fridge for 2 hours.

How to make a cheese filling?

You need sweet cream, mascarpone cheese, vanilla flavour and a little bit of powdered sugar. First, I whisked the sweet cream and added the powdered sugar according to the instructions on the packaging (you must keep it in the fridge before the whisking). 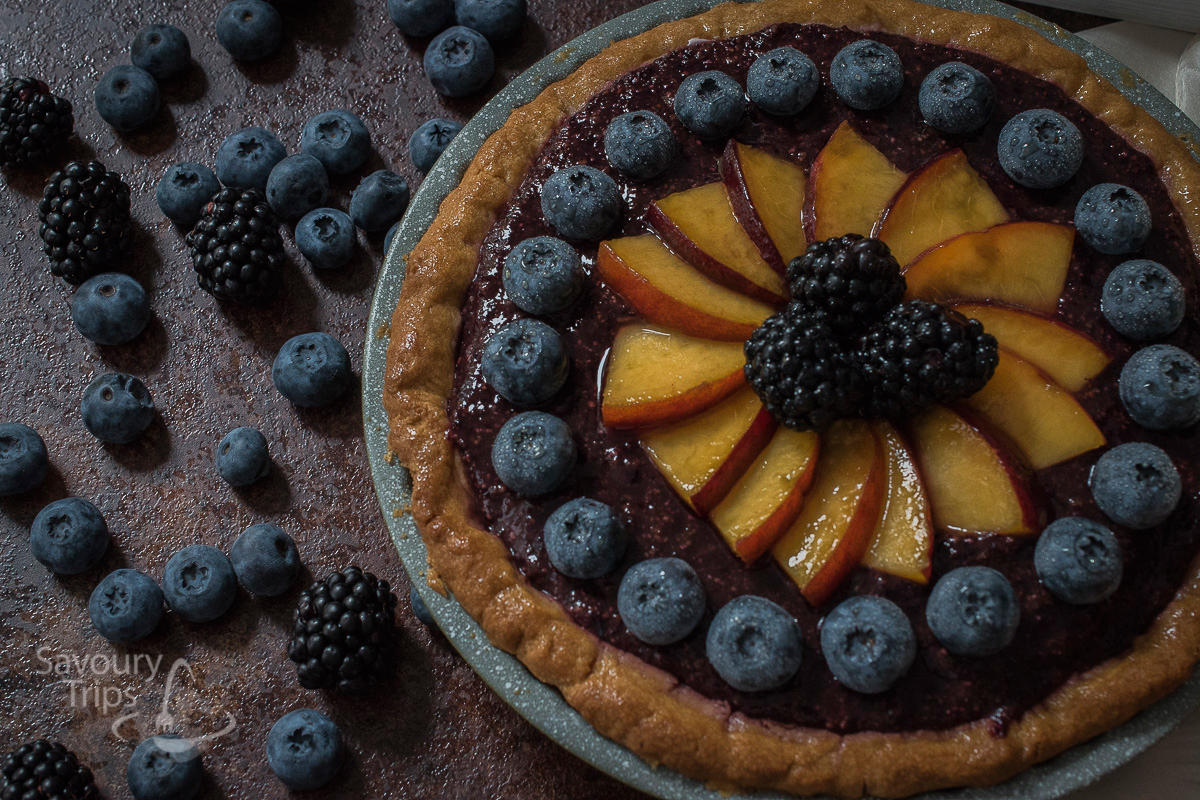 Then I added mascarpone cheese and mixed in those ingredients with a mixer on lower speed. Adding the vanilla flavour later did not seem complicated at all.

I put the filling I got into a syringe bag, and then in the fridge to cool down.

By the way, we are still doing the cheesecake recipe even though everything goes into the fridge and it looks like ice-cream more and more 🙂

How to make the blueberry and chia seeds filling?

I mixed all three ingredients together like for a smoothie (in a blender) and left them for a few moments aside so that the chia seeds absorb the excess liquid. 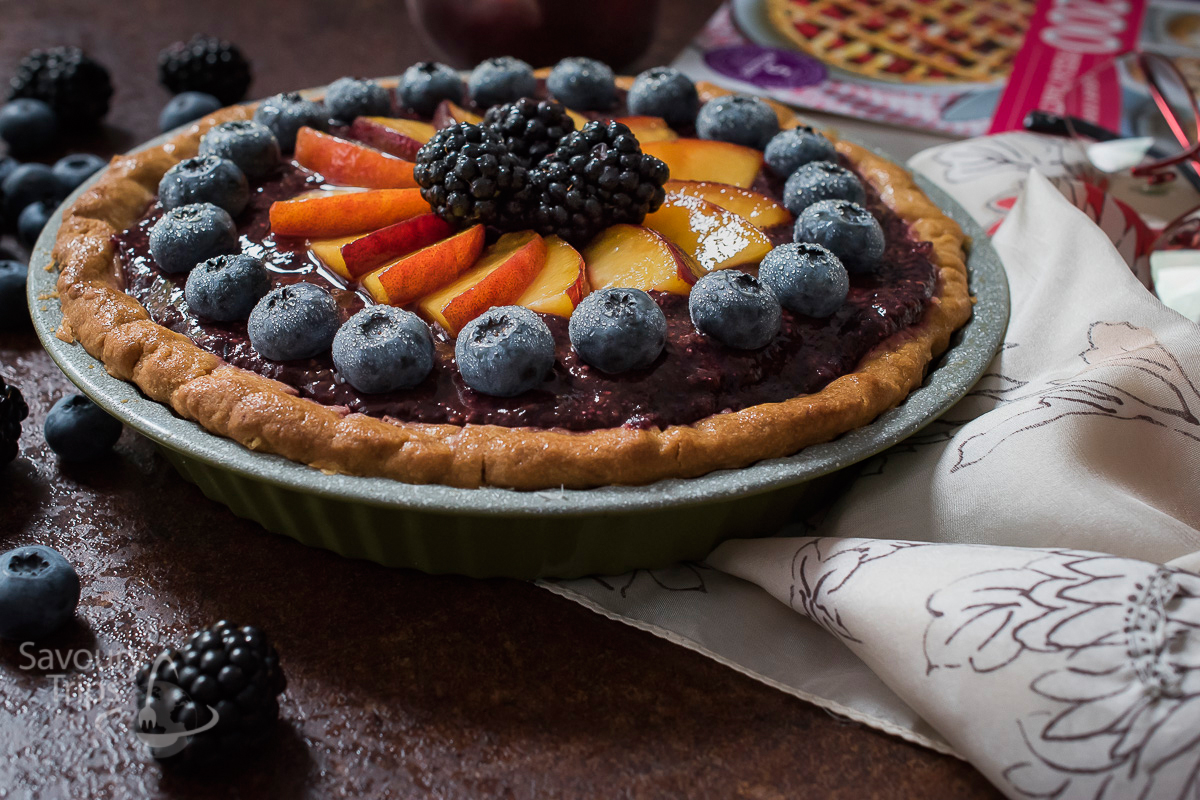 How to bake the crust?

I took the dough out of the fridge, left it for 5 minutes to warm up a bit. Then I spread it between the two baking papers so that the diameter was 26 cm… Just so that the dough edges go across the casserole a bit.

I sprinkled the casserole with the melted butter and flour so that when taking out the baked crust there are no surprises.

I put the dough into the casserole and then I covered the central part of the dough with the new rounded baking paper and put weight in it (pasta or beans) so that during the baking the bottom doesn’t rise.

For the first 15 minutes, I baked with “the weight” at 170°C and a fan, then I took out the central baking paper and the weight and returned it in the oven for 12-15 minutes more. 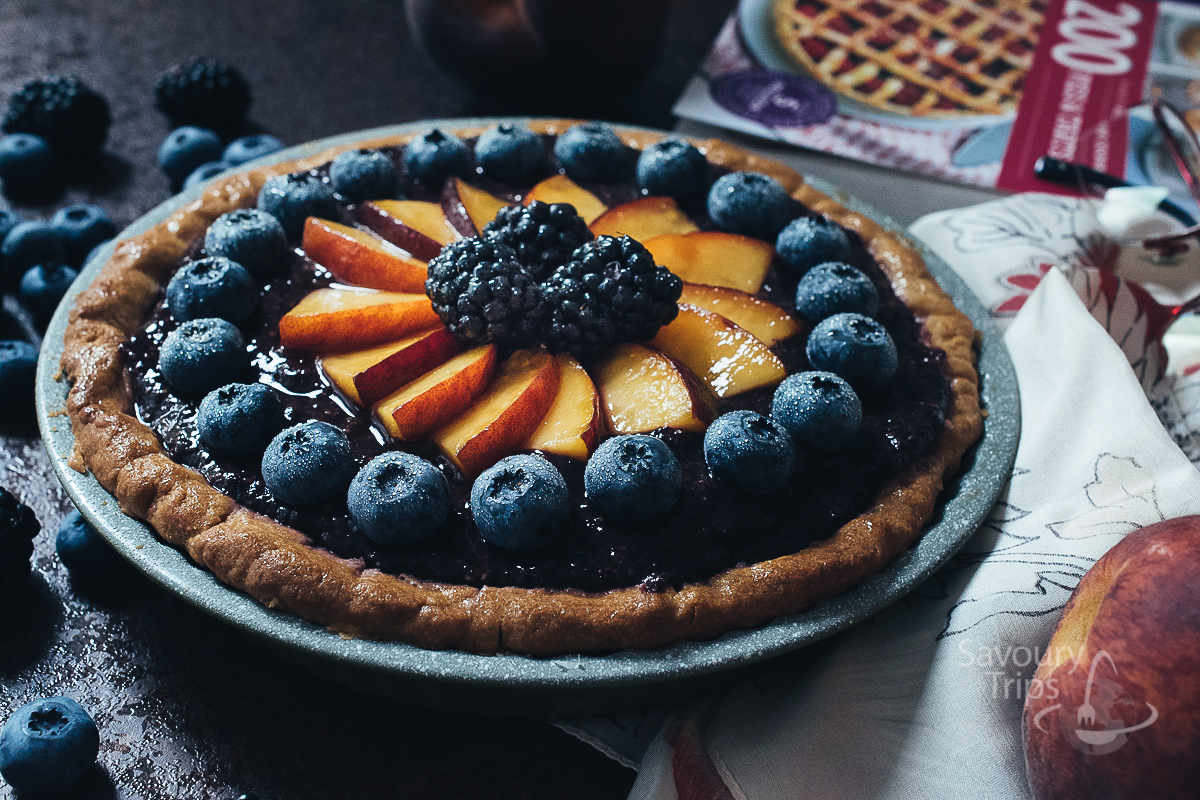 You already know that everyone knows its oven the best, and these are the parameters of my 10 year old oven, but you have to find out yours. In any case, they can’t be so different from the recommended ones.

When the crust is baked, it has to be cooled down to room temperature before filling.

I squeezed the mascarpone filling out of the syringe bag in a cooled down cheesecake crust. Then I put a blueberry and chia seeds filling layer over it and flattened everything.

You can decorate the way you like, I was creative and I combined all kinds of fruit I had in the house: peaches, blackberries and blueberries.

then I started dimming the lights in the dining room… 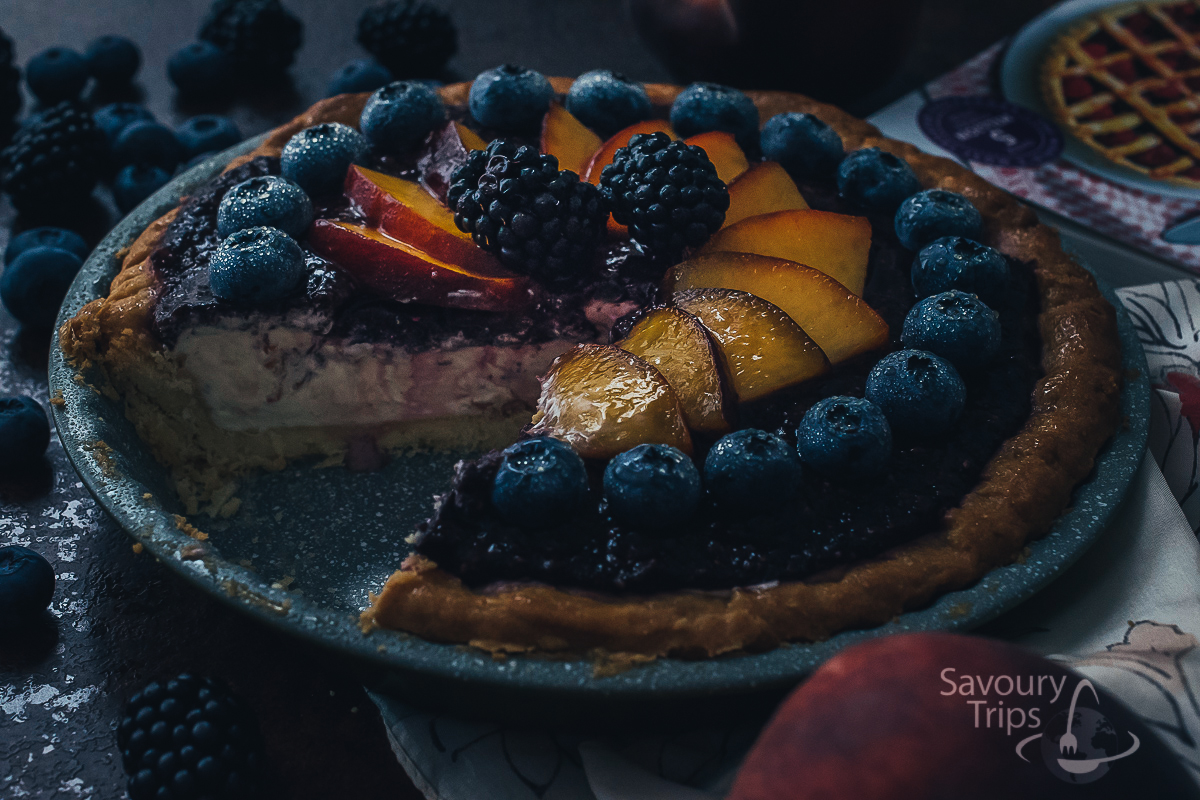 How did the cheesecake disappear?

With dim lights everything is easier… It disappeared because I kept taking bits and pieces with a teaspoon…then I started taking more…to even out a side…then I exaggerated, and the other side became uneven…So I started smoothing out the other side…And in the end, everything was perfect with an empty casserole 🙂

And then I concluded… I need a bigger casserole 🙂