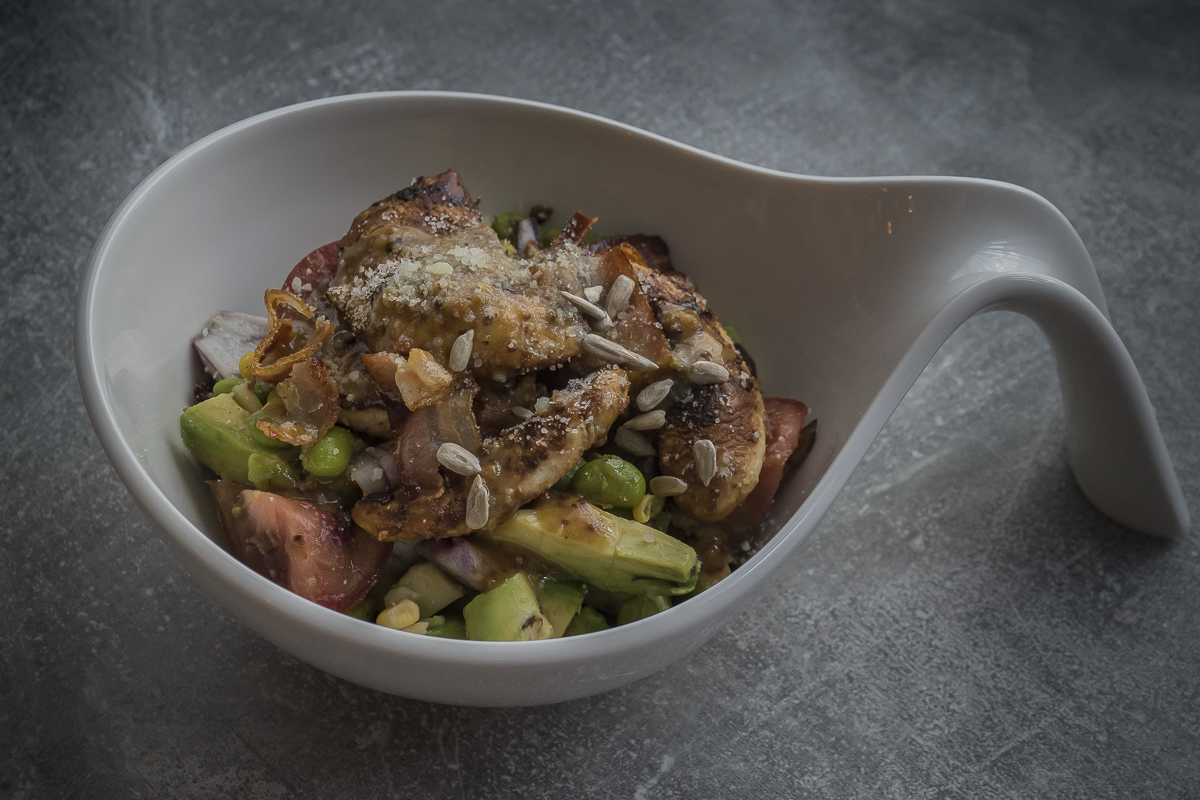 Chicken salad recipe with vegetables in honey and mustard marinade

Today, an excellent recipe has been created, completely unexpectedly – Chicken salad recipe. I have decided to type it for you at once so that you can try it out tomorrow. I am sometimes surprised how cooking off-the-cuff can turn out well. 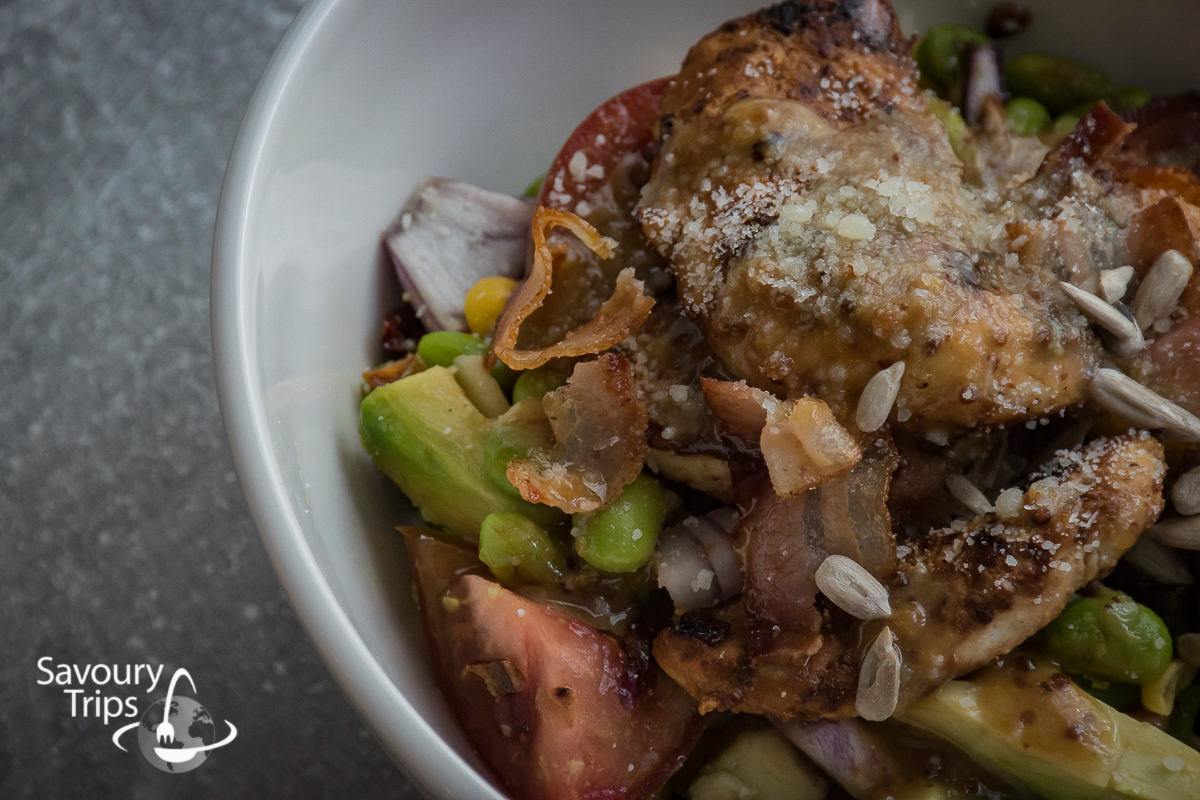 The essence in this Chicken salad recipe is in the marinade and dressing. Everything else can be changed depending on what you have in the fridge.

I made a marinade of honey, dijon mustard (whole grain mustard), olive oil, apple vinegar (mine was with added peppermint aroma) and salt.

I have shown the amounts of each ingredient in the ingredient list below… Mix them all in one dish. Keep a half of it as dressing (we will add to it two spoons of water later), and put the chicken cut into strips and smaller chunks into the other half. 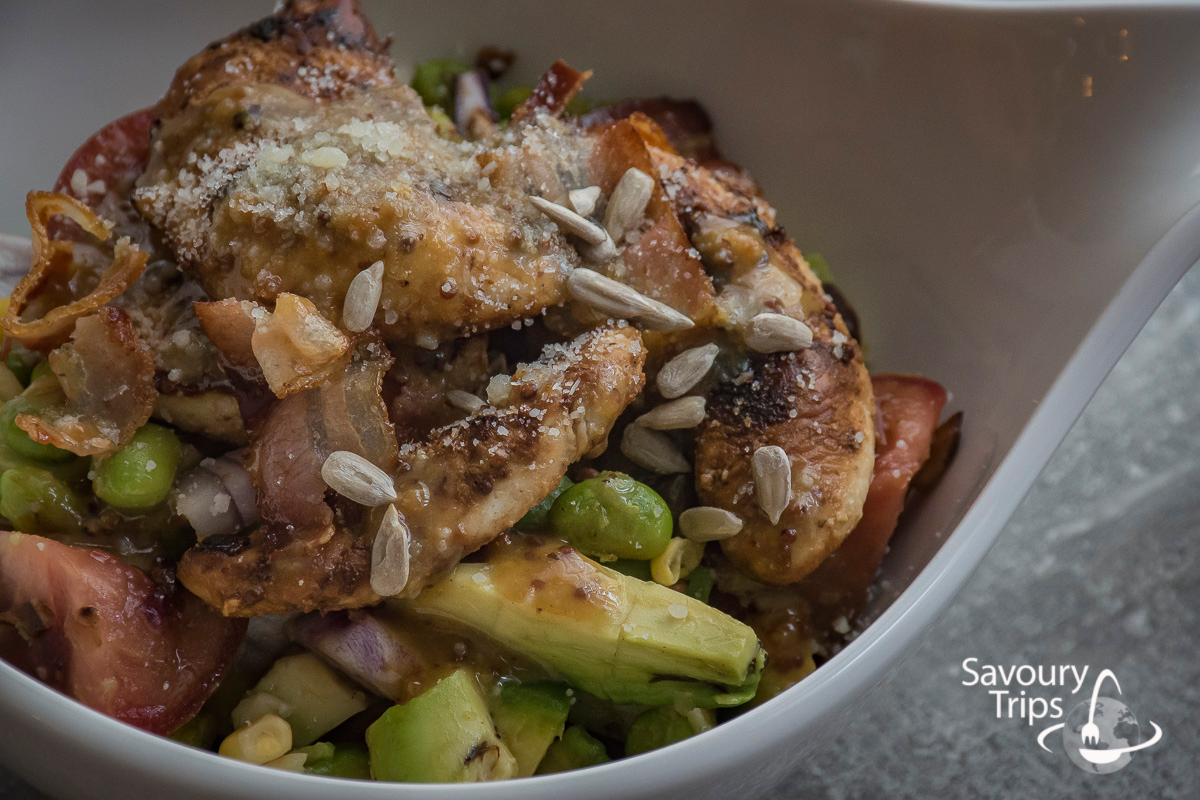 I left the chicken in the marinade on a room temperature for about 2h. Just enough so that it can absorb the aroma of ingredients mixture and soften a little bit more.

The second part of the recipe consists of vegetables… But I am not going to start from there 🙂 …First, the smell of real food should fill the house 🙂

I love bacon, well-done, so I fried about 10 long and thin slices. I nicked a bite or two on the fly :). When I fried it, I put it on a napkin to absorb the extra grease, and to make bacon crunchier.

Later, in the same pan, I roasted the chicken which had been in the marinade long enough. Chunk by chunk, so they all could get golden brown color as in the picture. 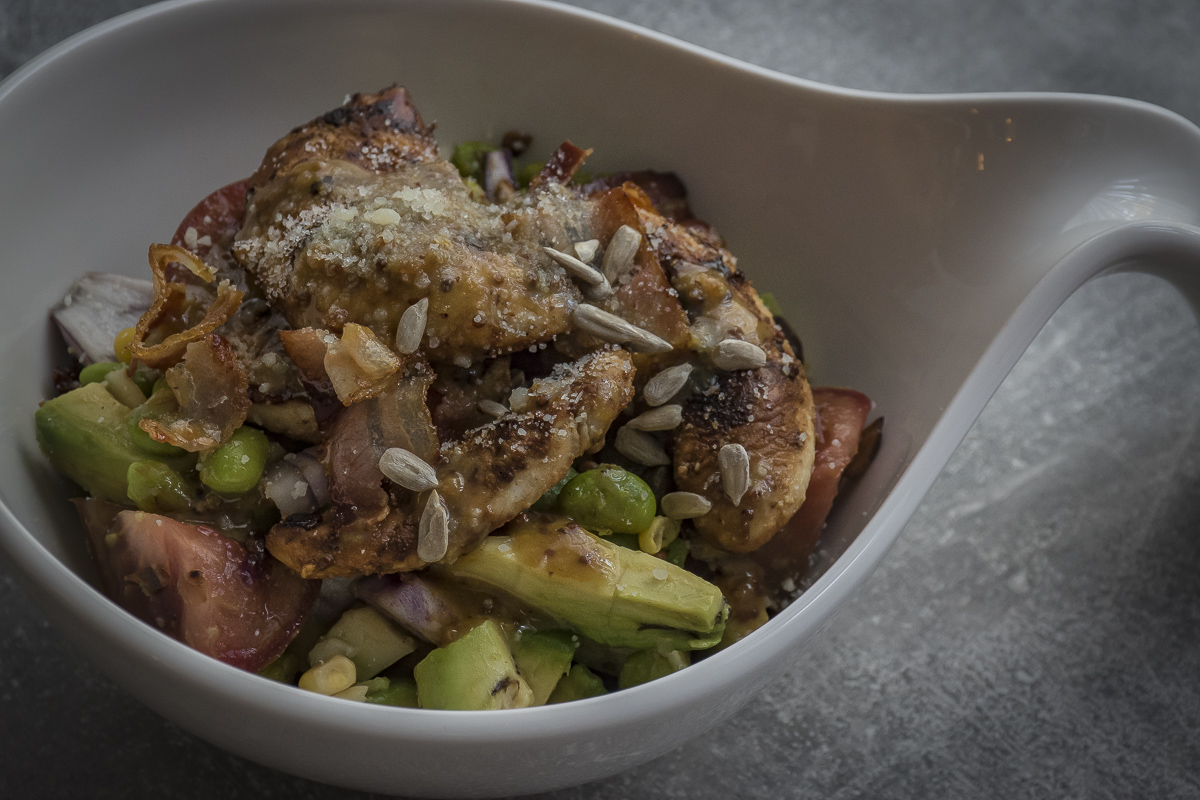 When I roasted the chicken I transferred it into some other dish, and instead of it, I put Edamame in (green soy beans which can be bought in Metro, and you need just grains not the whole pod). Edamame just taken out of the freezer, and I chopped into it several dried tomatoes which I had brought from central Italy this spring. The dried tomato was sweet like sugar.

I simmered it literally 3-5 minutes. After that, I put it into a dish where I later blended all the ingredients (salad bowl). Then I added sunflower seeds and minced garlic (into the pan from the beginning) so that they are toasted a little bit together. As soon as the sunflower seeds got that golden-brown color, I removed them from a burner. Then transferred into the same salad bowl where the other vegetables would go, too. 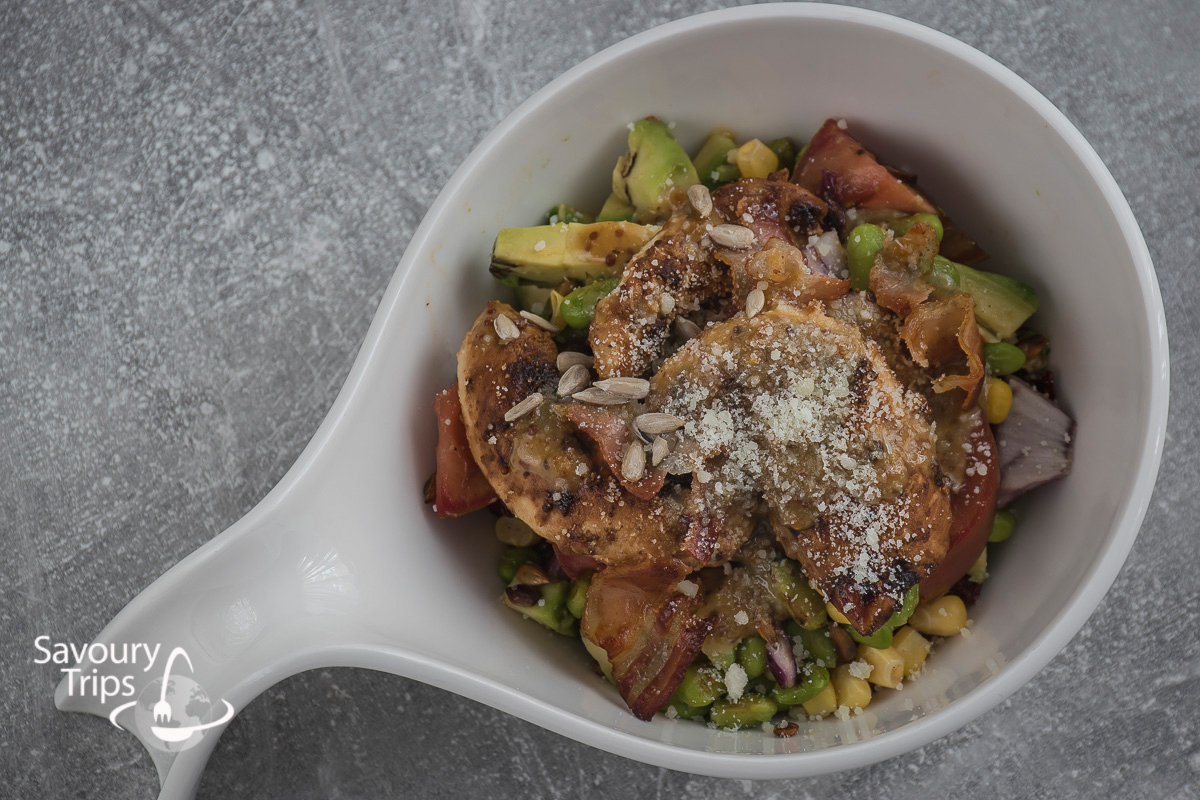 In the end, I just needed to chop a red onion, drain and wash the canned corn, peel the avocado, chop the tomato and lettuce (optional) and then mix everything with ingredients which were thermally treated, completely or partially, and pour the dressing over. 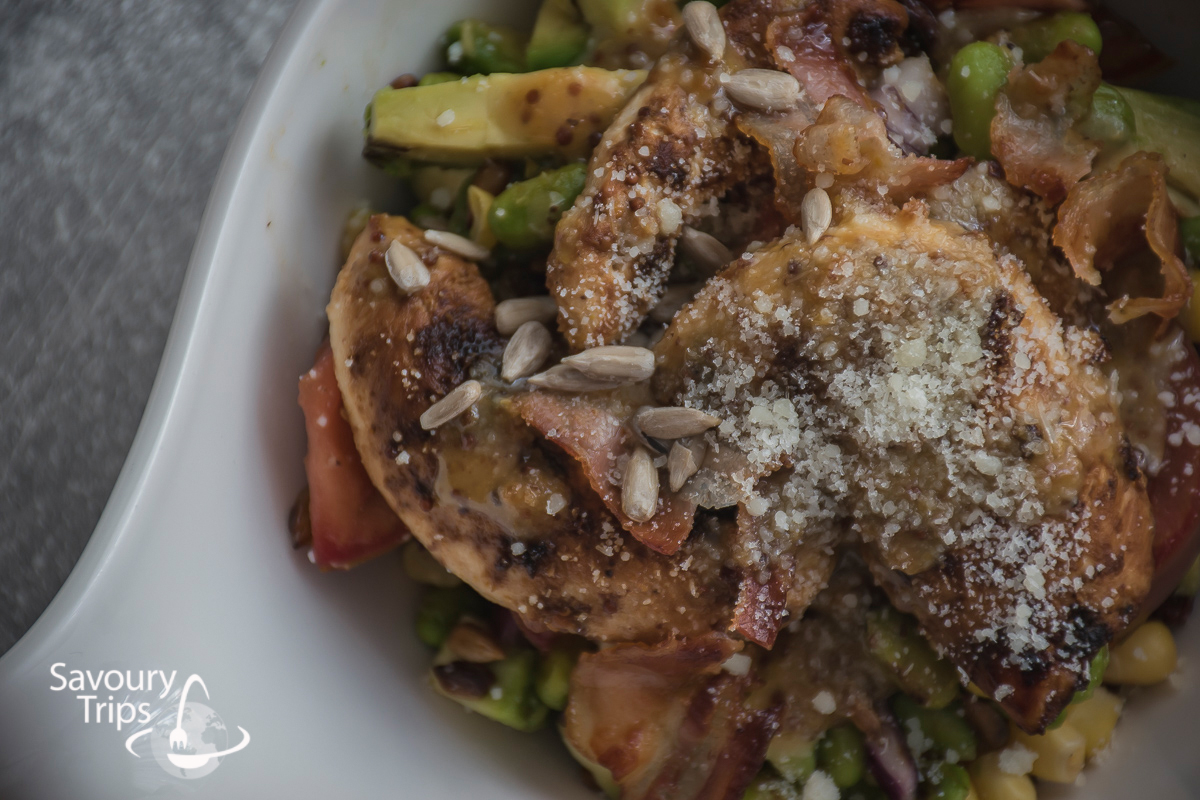 After that, there was dead silence until everything was gone 🙂 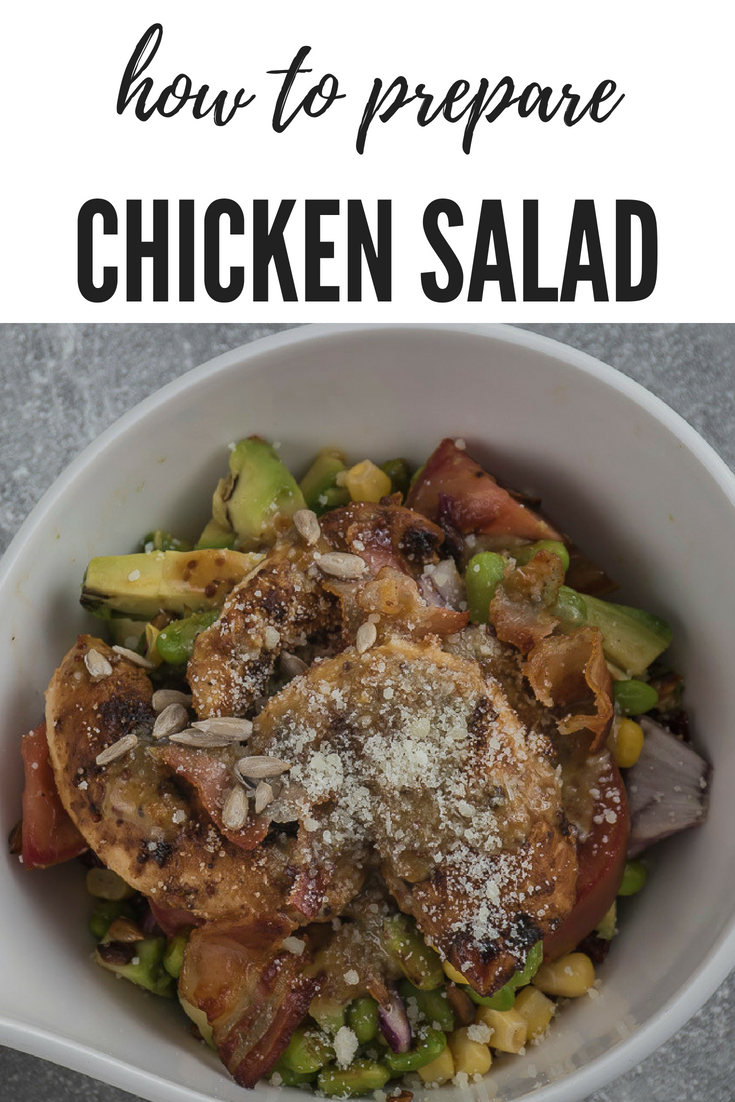 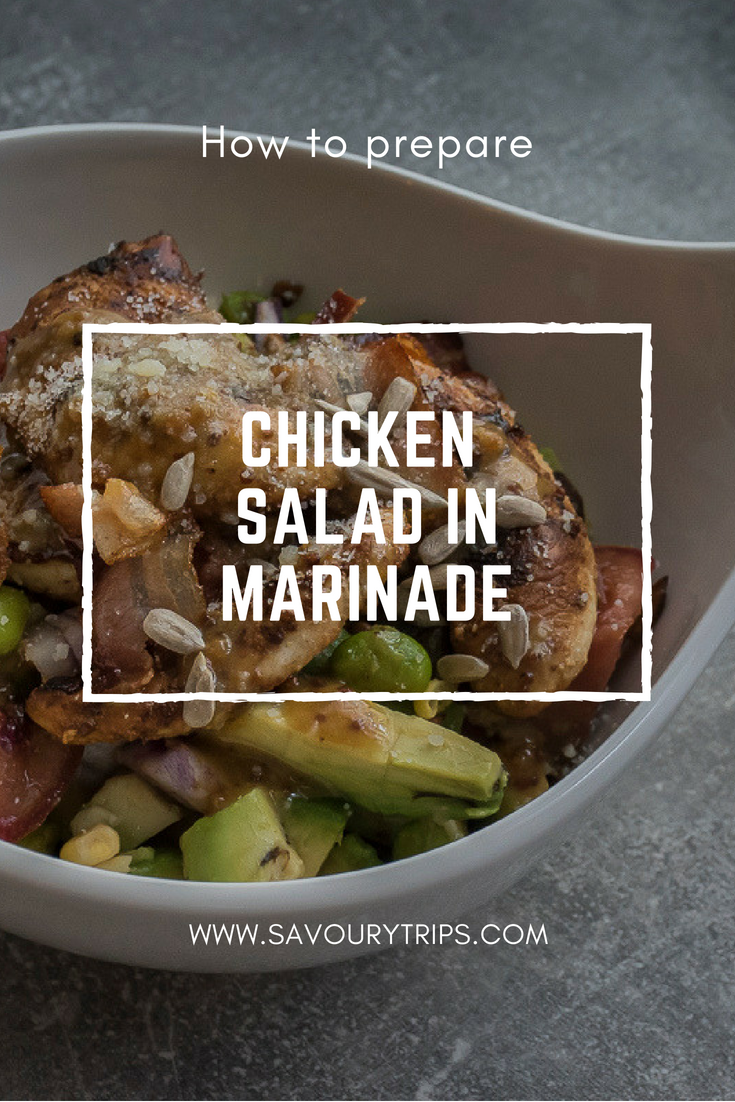