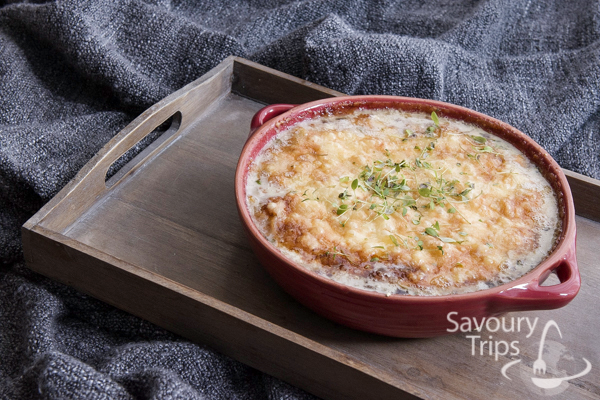 Made to warm you up

Tartiflette, potato baked in the oven, is an original French dish, but it’s a dead heat who prepares it more, the Swiss or the French. A real winter dish, perfect for the upcoming cold days.

It comes from the Savoy and Haute Savoy region, a part of French Alps.

Tartiflette is, of course, made of potato, and reblochon cheese, onion, bacon, fresh thyme, and some wine to drink while you prepare it.

Neither is there less ingredients, nor a more delicious dish, and everything fitted into one plate.

Here’s the picture of everything we need, except for the potato which was boiling at the moment. 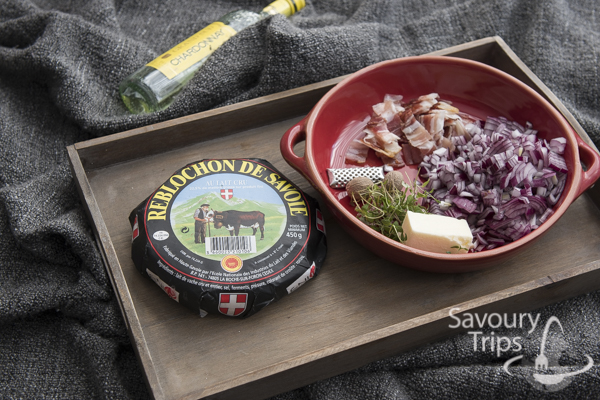 An option called a kind of cheese

Instead of Reblochon cheese, you can use Camambert or Brie cheese. 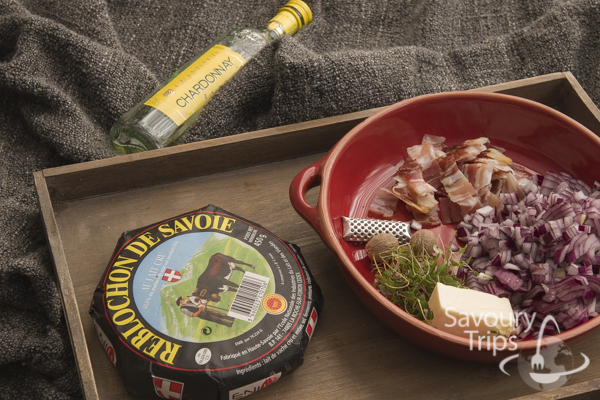 And now that neglected potato that was already put to boil (not to waste time).

So, my version is to clean and boil potato (uh, this picture is very bad): 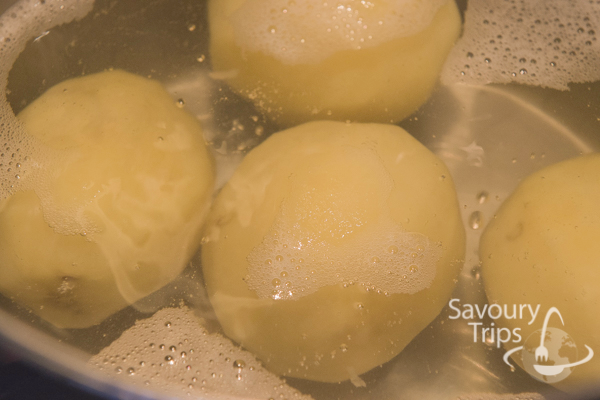 And stew the onion, on the other side

Some versions of this Tartiflette baked potato contain garlic. It is not a bad choice, so you can add some if you like it. 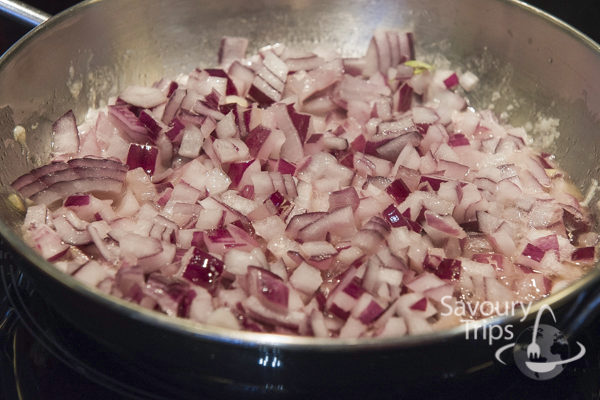 We add bacon, and then some nutmeg. There’re no other options here. 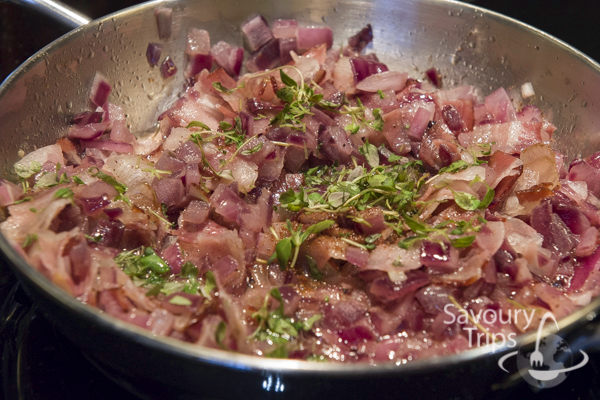 And then, we sort it… a line of stewed onion with bacon and spices. 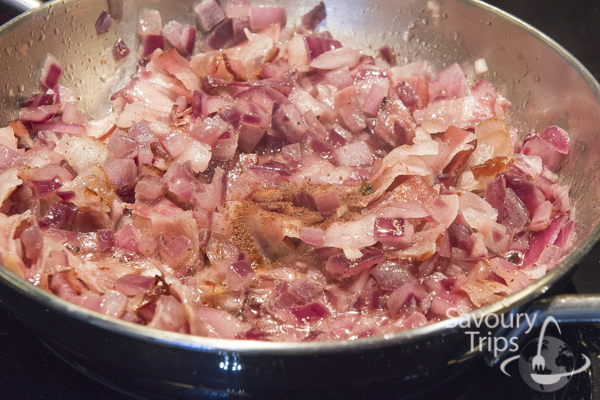 A line of boiled potato cut in slices. 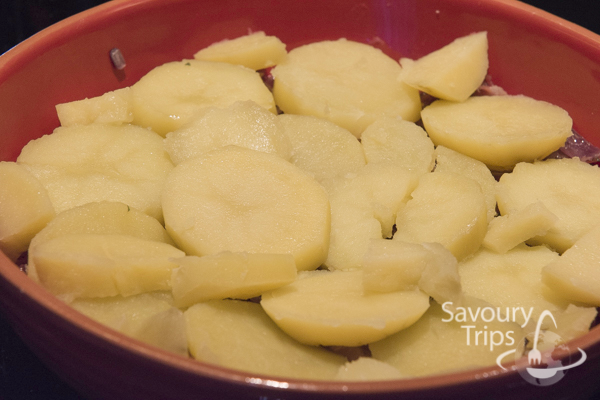 And on the top, chopped Reblochon and some wine.

I have chopped Reblochon with my fingers, and you can chop it, cut, squeeze it, or put an entire hunk of cheese or even something else.

Wine is not a mandatory detail, and you basically don’t need any liquid for this dish. The cheese will release enough fat.

But, I like to drink some wine… I can’t help it.

And, eventually, it looks like this, it bathes in the wine, I put a good amount of it, and after 30 minutes in the oven at 180°C it’s done. 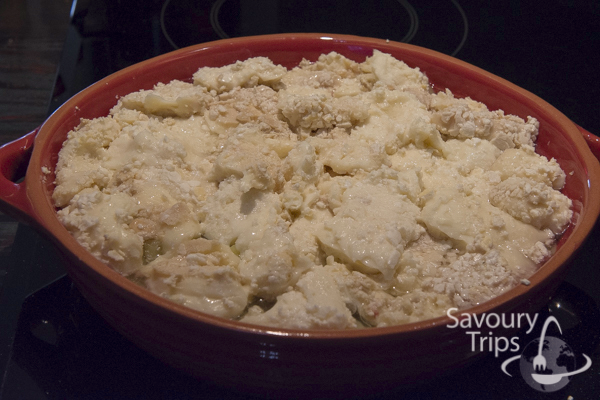 But once it’s out of the oven… it warms you very well… both with its aroma and the taste. 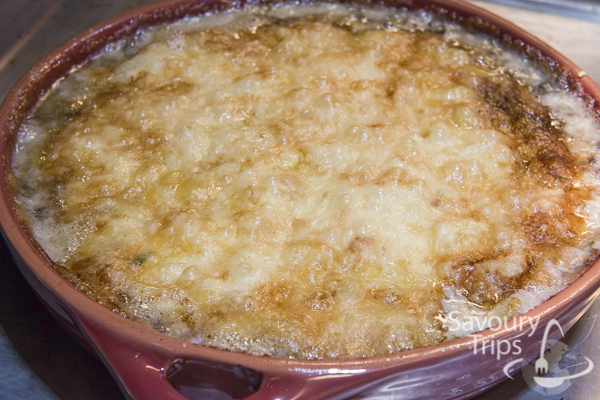 Now that we know how simply and quickly it is prepared, and how pleasant it looks, we should learn more about its background.

Just like when we’re getting married, and our mothers ask us ‘and who are his/her parents’?

How did this Tartiflette baked potato get its name?

The name Tartiflette was most probably derived from the Arpitan language (a French- Provencal language or a dialect) tartiflâ, which means potato

Tartiflette is not a traditional French dish, because it didn’t appear until 1980. This contemporary version of the Tartiflette recipe was inspired by a traditional dish called ‘péla’ made of potato cooked in the oven with onion, but without cheese.

A pan is used to make ‘péla’, a round one, similar to our cast iron pan which is very popular nowadays, and it can be ordered from GASIKS from Krusevac.

Reblochon is a kind of French cheese which is a key ingredient to the baked potato.

Well, now, I didn’t understand either what that ‘milk for the second time’ was. When we check the history, it is much easier to understand.

In the late medieval ages, farmers paid their tax based on the milk production. In order to avoid higher taxes, they avoided milking cows twice a day. After ‘the inspectors’ would leave the rented faming lands, farmers went to milk their cows for the second time. Well, that ‘second time’ is of importance for this cheese. Reblochon is made of that milk.

The second theory is more down-to-earth one, and according to it, milk by the end of the milking is significantly fatter and that is why it is used for the cheese production

How is Reblochon made?

It is made from three types of Alp cows, and those are Abondance, Montbelinard and Tarine. The cows are exclusively fed at pastures, with no additions, such as wheat, or anything else. They are milked twice a day, in the morning and in the evening. We mentioned when we talked about Gruyer.

Fresh milk is heated to 37°C, of course, lactic acid is added- yeast and rennet, in order to make milk thicker. Once it’s thickened, the lumps are broken into pieces the size of rice.

Afterwards, it’s put in the molds and slowly pressed and covered with gauze. It should remain like that for a couple of hours, so that the whey would separate from it.

It is washed and turned regularly during that time.

And then, after that, cheese is placed on the juniper (spruce) board, which keeps the moisture, and is left at 12°C for two to three weeks to mature.

Now that we know something about its background, it’s time we tasted it. 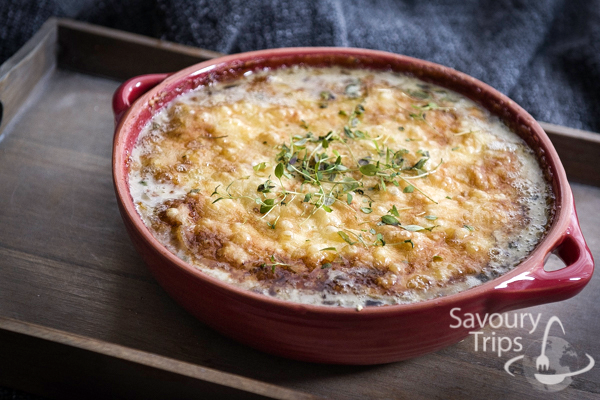