5 Most important things you shouldn’t do on Lefkada

I’ll easily write down everything you can do on Lefkada, but lets’ start with what you shouldn’t do…

What not to do on Lefkada?

Nydri star is, in that case, acceptable solution as well… just as long as you don’t stay in one place the whole time.

And this is why I’m telling you all of this…what can fall into this category.

Lefkada things to do?

It’s located on Meganisi…it can be seen only from the seaside…so…rent a boat (here it is)…or…well ok…Nydri star cruise is fine too :).

You can go this far

It’s basically a beach (in the north near Lefkas)…but very specific…it has its windmills :)…

Since you’re near Gyra beach anyway, this beautiful monastery is close by.

The monastery is lavishly decorated with frescos and paintings from the Venetian period. You’ll notice ostrich eggs on the chandeliers (in the main church). It is believed that they represent a protection from spiders.

I’m so curious to find out – why are the Greek so afraid of spiders?

If you are really…as they say improperly dressed…naked shoulders and legs… don’t worry because you’ll get your monastery dress anyway :).

Within the monastery, there is a zoo, which will be very interesting for the youngest.

The entrance is free and you can stay there for as long as you like. The only thing to pay attention to is visiting hours. The monastery is not open from 14 to 16h.

In front of the monastery there is a big parking lot, so you don’t have to worry about the car. Since the toilet and drinking water are necessary in the summer heat, all that is provided…

All you have to do is enjoy 🙂

This is the castle you cannot miss and not see because it’s located right at the entrance to Lefkada…it stays at your right side. There are beaches around the castle too, so you can throw in a swim or two as well.

Vasiliki is a town in the south of Lefkada, as big as Nydri. It’s the favourite place for surfers (windsurfing) because the wind is frequent and it creates a great microclimate for stunts.

Of course, Vasiliki has its beaches, but compared to Gialos, Kathisma and the rest of the west side, it’s really nothing special.

We used Vasiliki for the evening strolls or went there to eat fish, gyros or waffles and chocolate and ice cream pancakes. 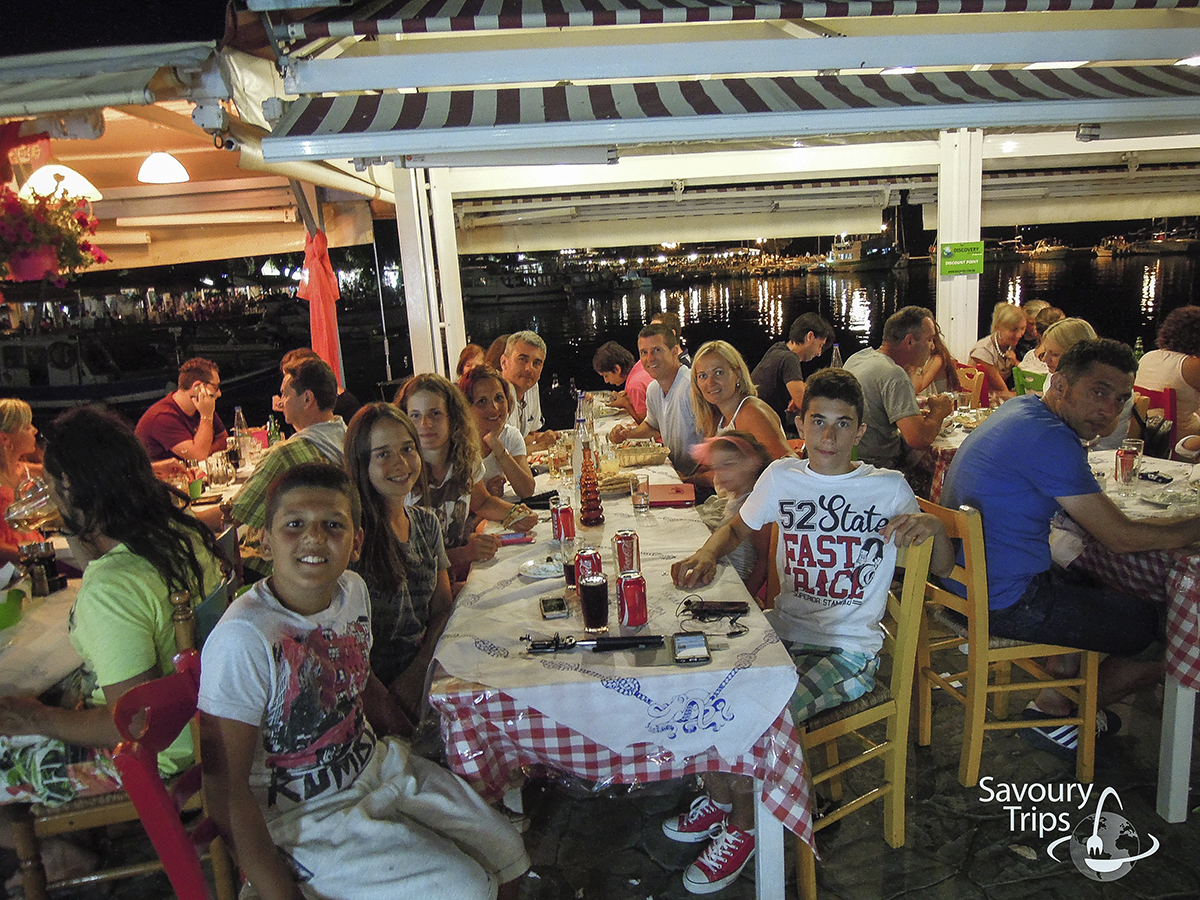 Gyros in a portion, Vasiliki

Certainly the basic rule for choosing a restaurant where you’ll try all of this are checkered tablecloths and a packed tavern, so you’ll have to wait for your place for a while.

There are several taverns like these, so you won’t make a mistake if you enter any one of them.

Karia is a village in the mountain, in the central part of the island.

It’s right in the middle of Nikiana in the east and Kalamitsi in the west. It’s such a lively village, but quite chilly in the evening, so bring your summer sweater.

On the central square, there is a huge restaurant with live music (almost every evening). I don’t want to reveal just about everything to you, I’d like for you to be surprised a little as well when you get there because everything is really unusual (that’s why there are no pictures :)).

You also have a walking path with various shops.

Here I recommend a restaurant (not that central one on the square). We visit it every year at least twice. Don’t ask for gyros and souvlaki there, at least I wouldn’t 🙂

The restaurant you should visit

You should eat only wild boar and venison. My recommendation is wild boar sausages…but you can certainly try these specialties, too:

This is some traditional Lefkada dish, I forgot the name of it, but it’s made out of cockerel meat. It was excellent!

I promised I would take you to try lamb 🙂 Maybe even the best I’ve tried so far.

The restaurant is called Taverna Pavlos and this one is also located in a village that has 5 houses on the hill close to Nydri. Let’s say about 1-15 minutes from Nydri by car.

If you’re going there without reservations, be there as early as 19:30 because only then will you be able to find a spot.

It’s not even dark yet, and there’s already a line

The next time though, make a reservation the day before. You’ll see why…it’s packed with people…and the best lamb pieces disappear in a flash 🙂

Uhh….this is not to be missed

If you don’t eat lamb, other meat is for a straight ten as well…everything is being turned on the skewer right in front of you 🙂

And the gravy keeps pouring…

It already makes my mouth water…

When you get bored with beaches, take a ferry and go directly to Cephalonia. The ferry will bring you to Fiskardo. A fashionable place…fancy-pants 🙂 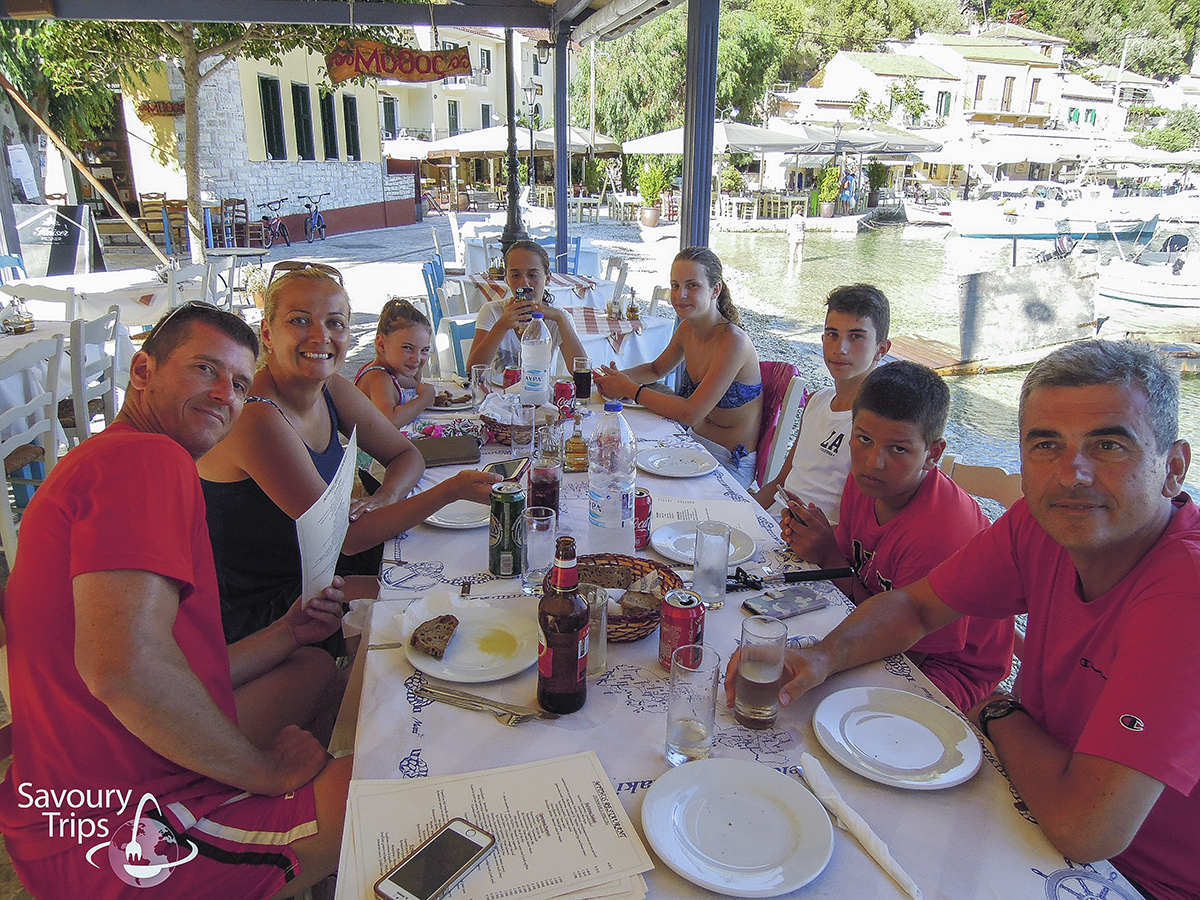 We eat everywhere we go 🙂

You can board your car too, but you won’t have as much time to drive around the island (if the timetable hasn’t been changed).

Meganisi is an island on the opposite side of Lefkada. I would tell you to go to Onassis’s, but because of the land’s privacy, they will not take you in. Meganisi has its charms too…they are best seen if you rent a boat in Nydri and go around it from the seaside during the day…but there is an option for a ferry, then put your car on the ferry and go to the beaches you can get to by car.

It’s on Meganisi on the north side, it’s called  O MHNAS or Minas – in the Ambelaki bay.

You can get to it by land or by water.

The best fish is there, but there are other meat meals as well. The lamb is not so bad either.

Here’s how you clean them. Some eat the head too, but it’s unnecessary. I skip it.

Grab the head with one hand, and the tail part with the other…and I have to say – rip the head off.

Then you take off the thin shell, slowly…until you get to the clean meat. You don’t need tools for them.

The ferry lines depart from Nydri.

The disco boat departs from Nydri. Ask for the information at the port where “Nydri star” is anchored….It leaves at about 22h, it’s a real crazy house with the music blaring…a true adventure for those without kids.

Great daytime activity. You also have an organized kayaking option.

We organized it by ourselves 🙂

I don’t dare, but for those who do…it can be a big, big adrenaline shock 🙂

Are you asking yourselves what it is?

With a guide, you can visit the entire production, and at the end buy something.

To me, their white wine is totally ok.

They’re located at Nydri, there are road signs. You’ll need comfy clothes and a bit of water because of the heat.

But at the very beginning, there’s a small tavern where you can refresh yourselves afterwards.

The path leading to the waterfall

A small lake and part of the waterfall

You can go for a swim, if you like cold water

You can see frogs, too 🙂

Extreme, at least for me 🙂 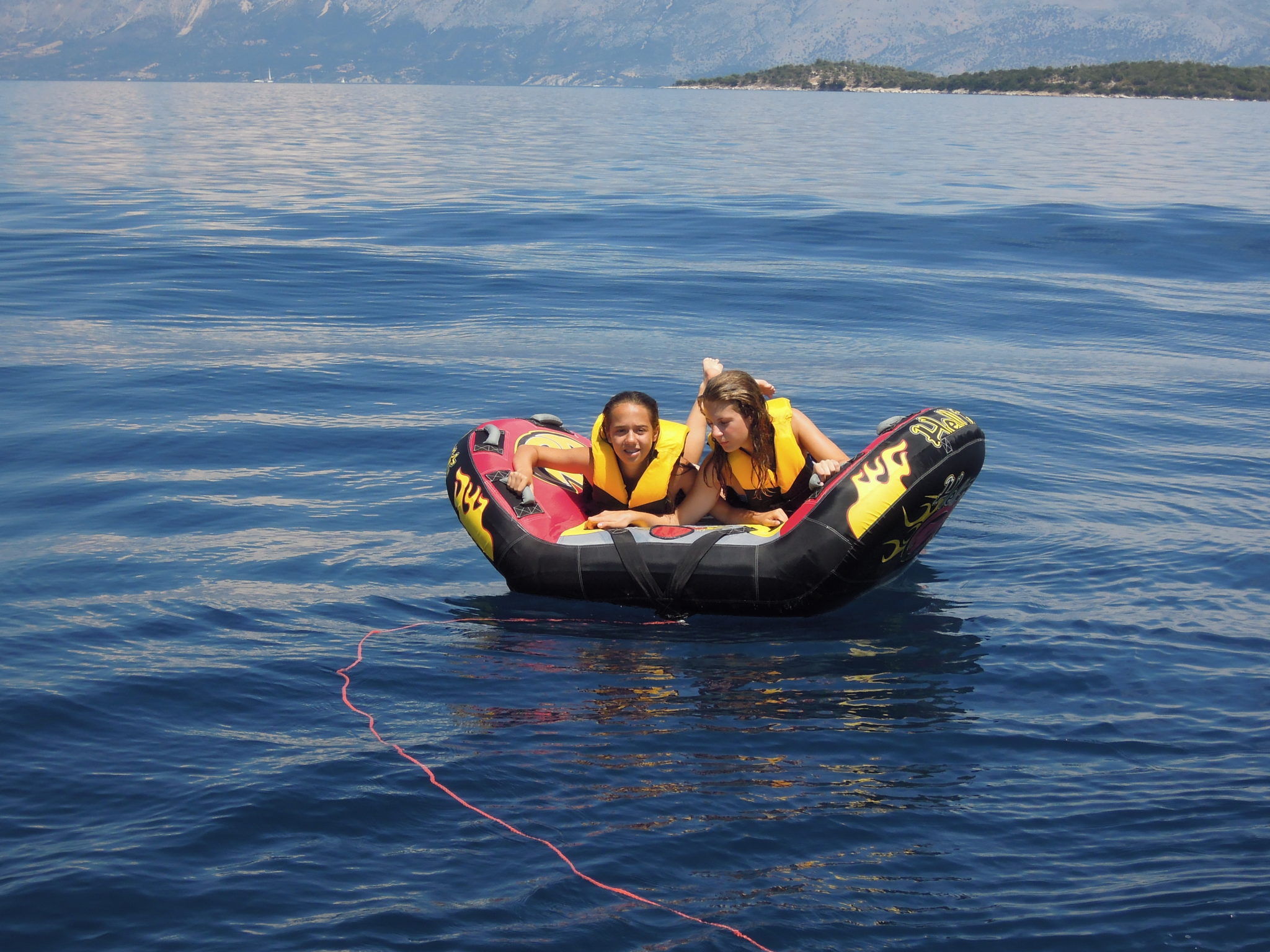 I prefer something safe 🙂 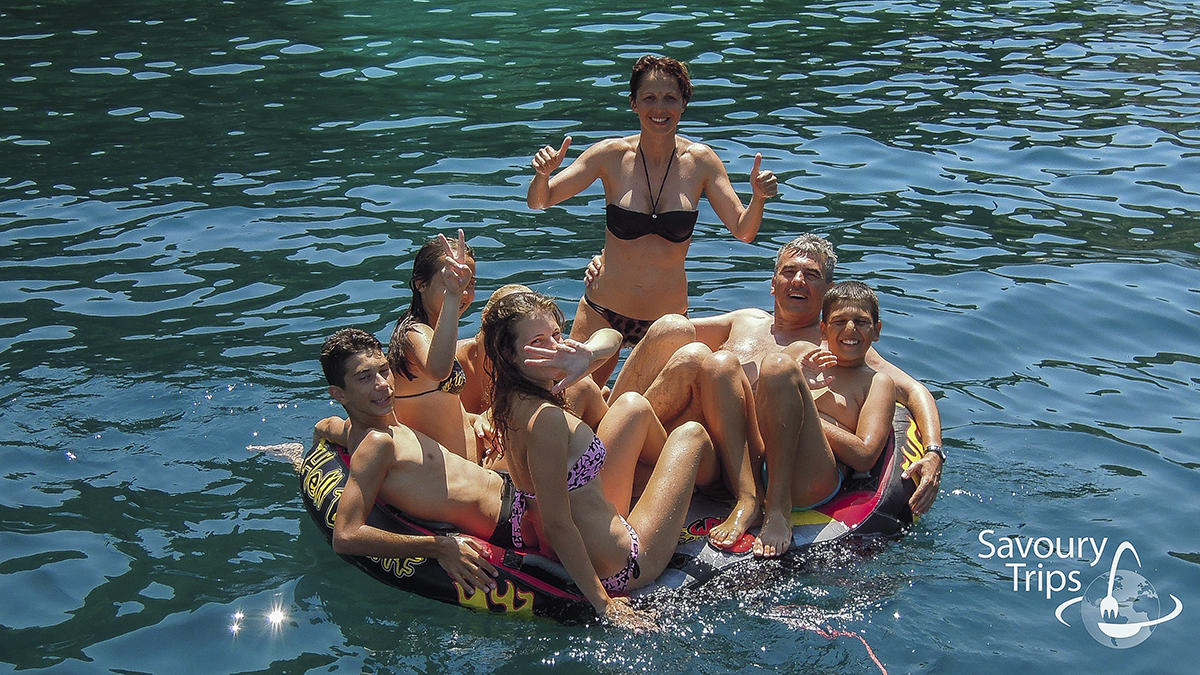 Gyros is good in Lefkas too, at the promenade by the sea 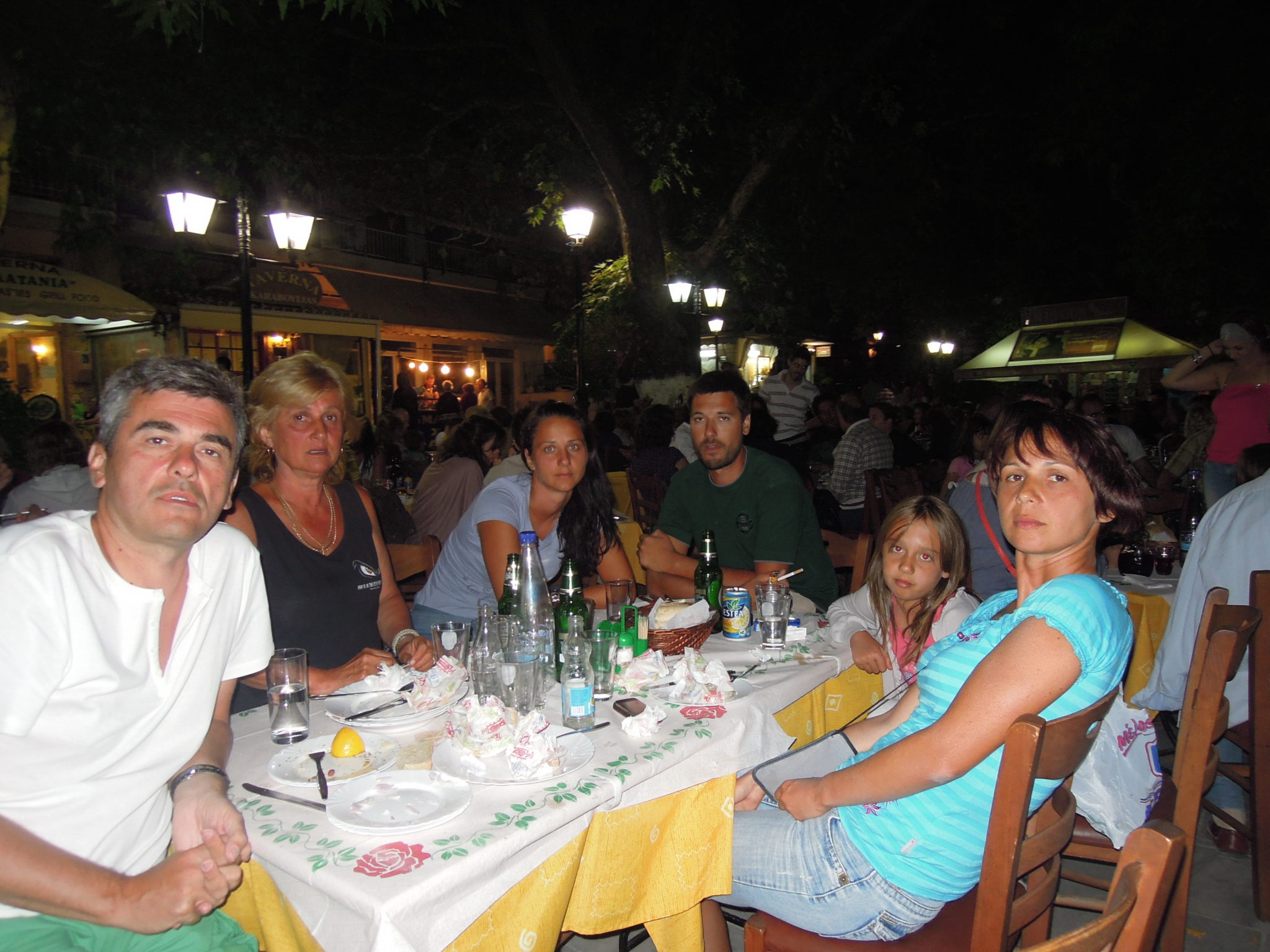 The experts for gyros from Lefkas

I don’t eat any less than a portion for quite a bit now:)

Gyros in a portion

Let’s sweeten it up, as always 🙂

Ohhhh…this is as good as it gets 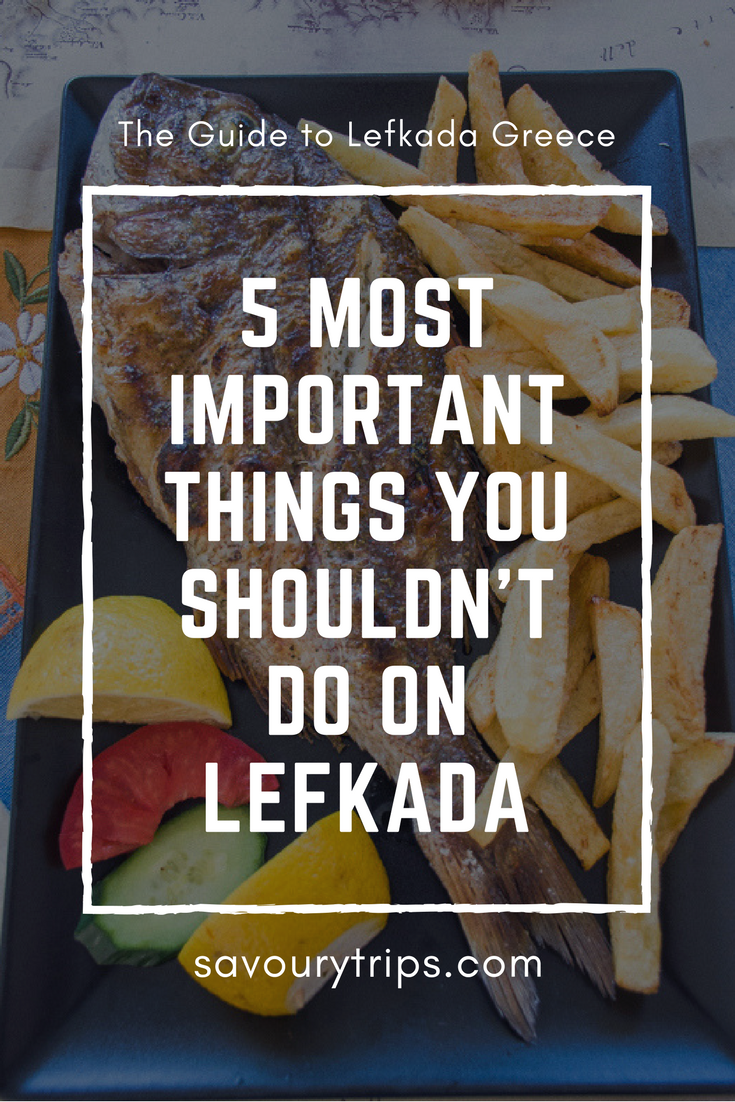 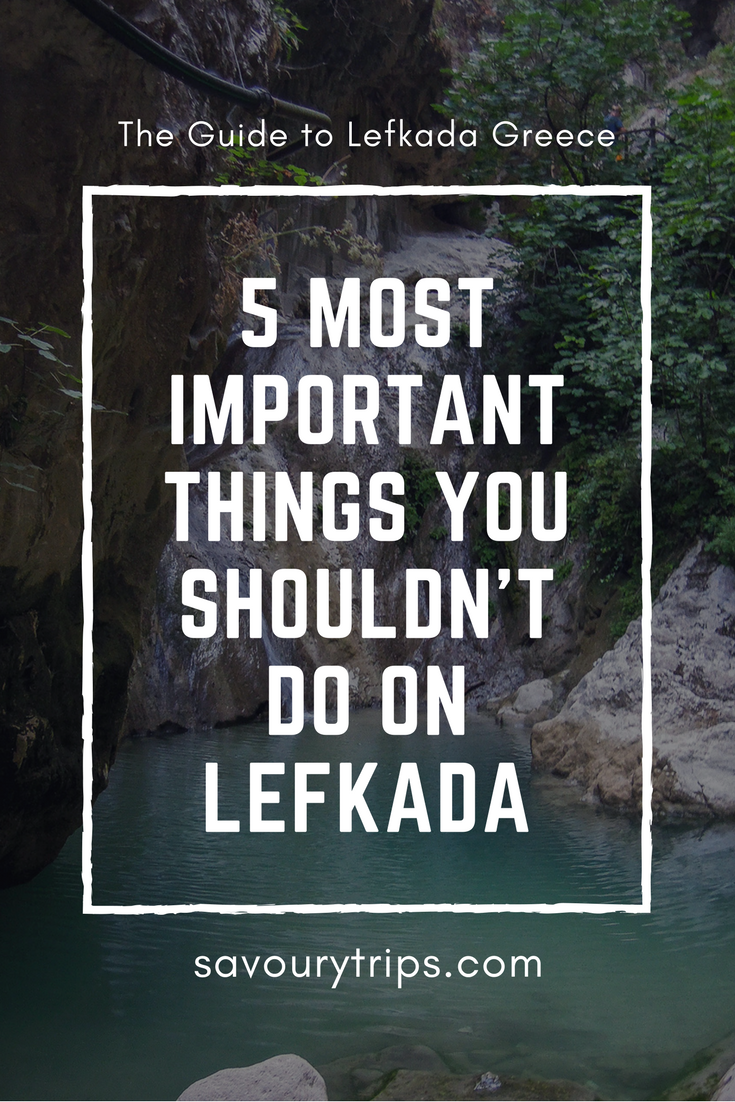 How did we survive the first shipwreck and become sailors on Lefkada?
Travel guide to Pelion Greece, another hidden gem of Aegean sea