Another one of the Top Greek destinations in the Ionian sea.

Lefkada is located between Corfu and Cephalonia (Kefalonia). We were on Cephalonia here.

It is separated from the mainland of Central Greece by an artificial channel only 25 meters wide. Above the channel, there is a drawbridge which from time to time goes up and down so that sailors, cars, delivery vehicles, motorcycles and buses full of tourists can alternately pass.

This bridge gives the impression that Lefkada is not an island.

Lefkada is not a small island, its coastline is 120 km long, so every day you can enjoy a different beach. The island is predominantly mountainous, especially in its central part. It’s rich with vegetation, it has beautiful beaches and crystal clear water, not to mention the color.

Generally, I would divide the coast into two parts.

The west side – unprotected and open, where you can have waves up to 3-4 m high. I would recommend this side to couples, adventurers, and young people. There is music on the beaches, and selfie sticks and pretty girls, as well as boys, are all around you 🙂

The east coast, considerably tamer, is excellent for sailors, speedboats, sailboats and yachtsmen. I would generally recommend it as a family option and for those who don’t want as much dynamic throughout the day.

How to get to Lefkada? 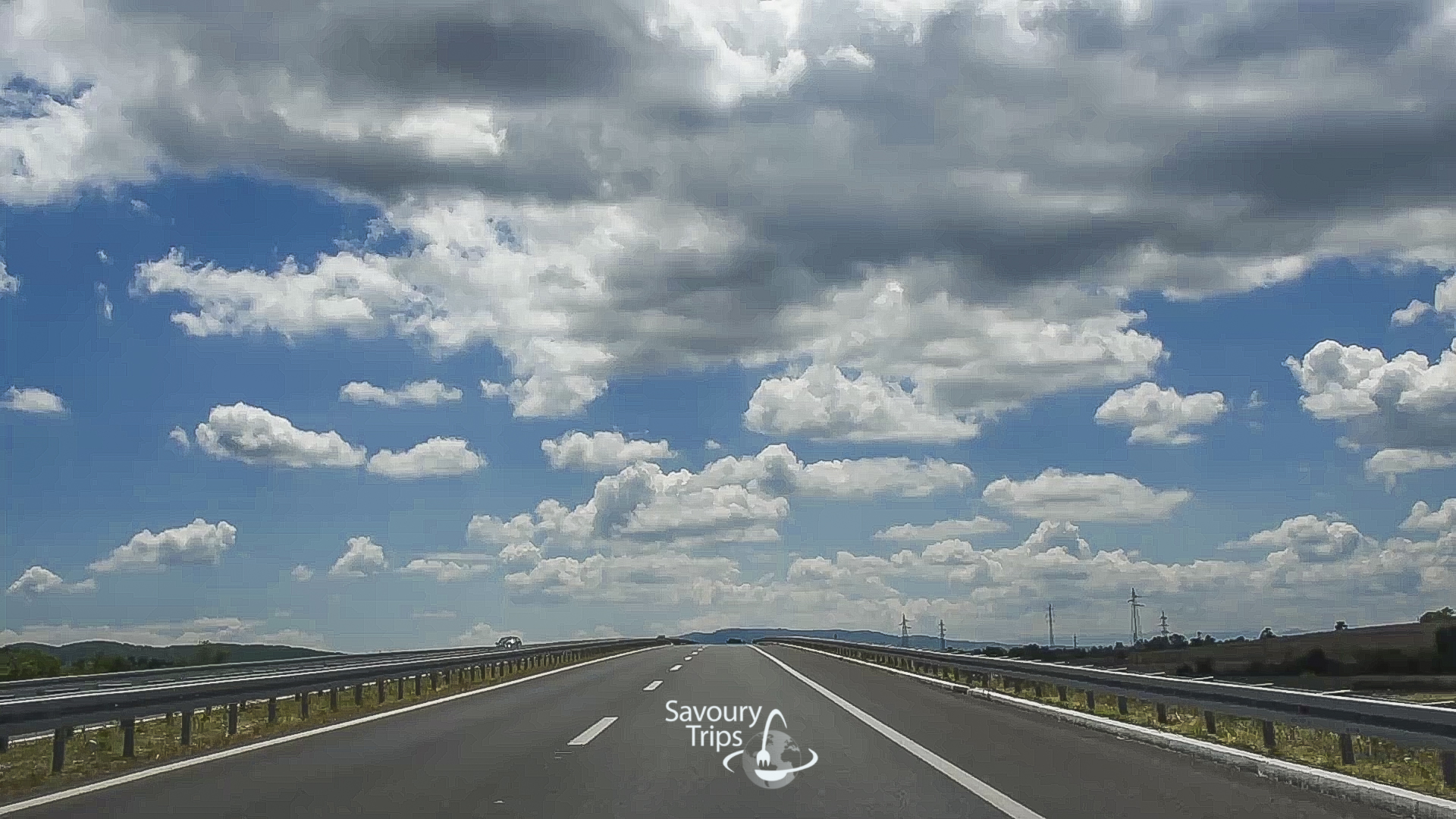 Since it’s on the same side as Cephalonia, for those who are coming by car, the entire road is similar to the one for Cephalonia. You can read about that here.

Passing through the underwater Aktio Tunnel which is located right after Preveza is a special experience. It costs a little bit… a few euros.

Even though I have visited Lefkada many times, I have to tell you that every time I pass this tunnel I have the same (unreasonable) fear that something is going to burst and that the sea is going to barge into it. 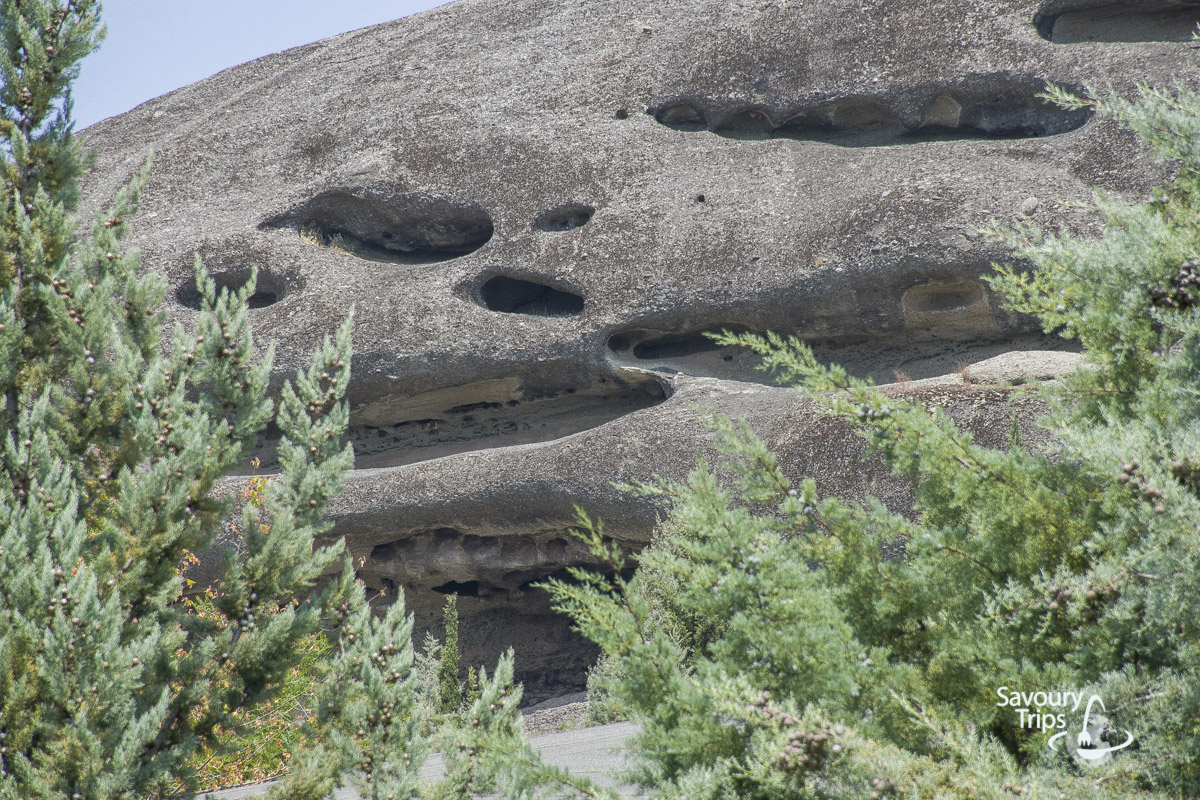 The hollow rock below Meteora

Traveling by car is the best option because you pass Meteora as well. 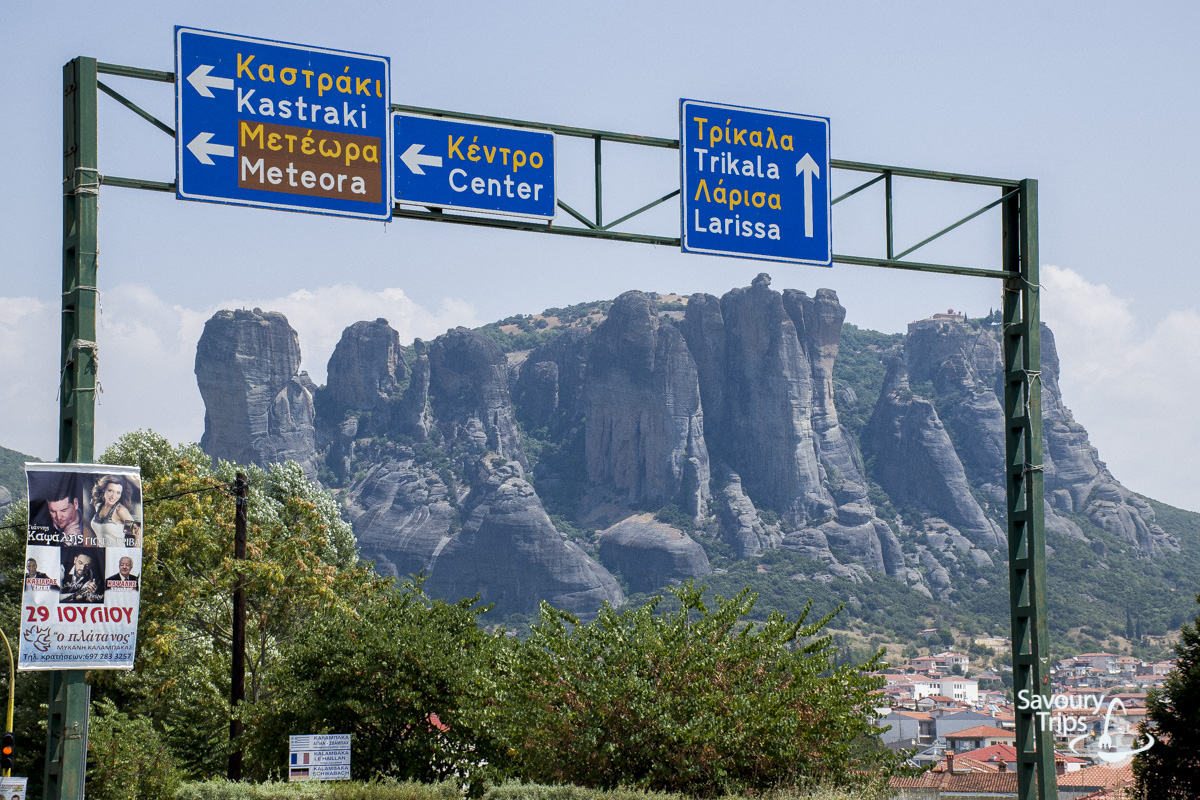 There are approximately 24 monasteries built on the rocks from XIV to XVI century by monks. It is clear that they built them by hands since they didn’t have the machinery – and how would they even transport it all the way up? All of this gives the additional charm to the monasteries.

All of this gives the additional charm to the monasteries. 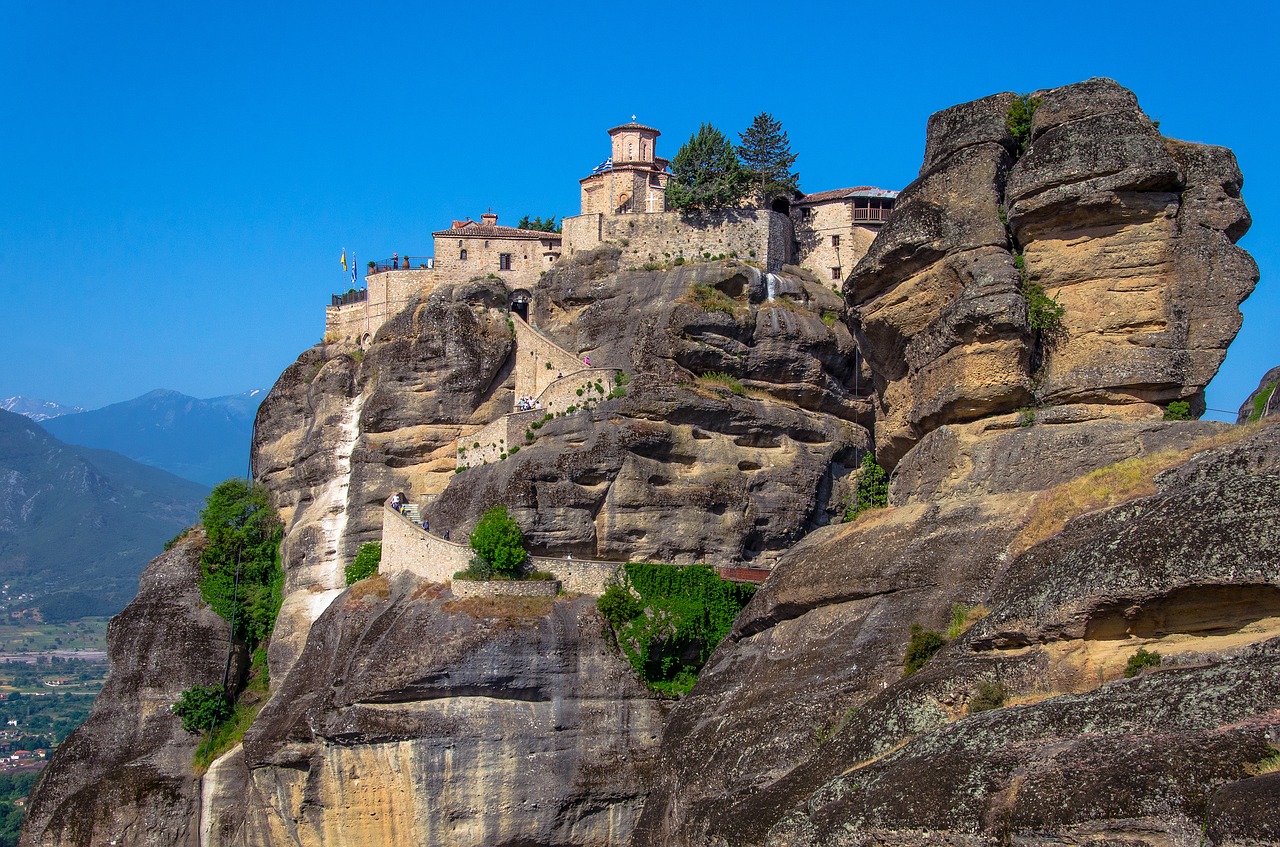 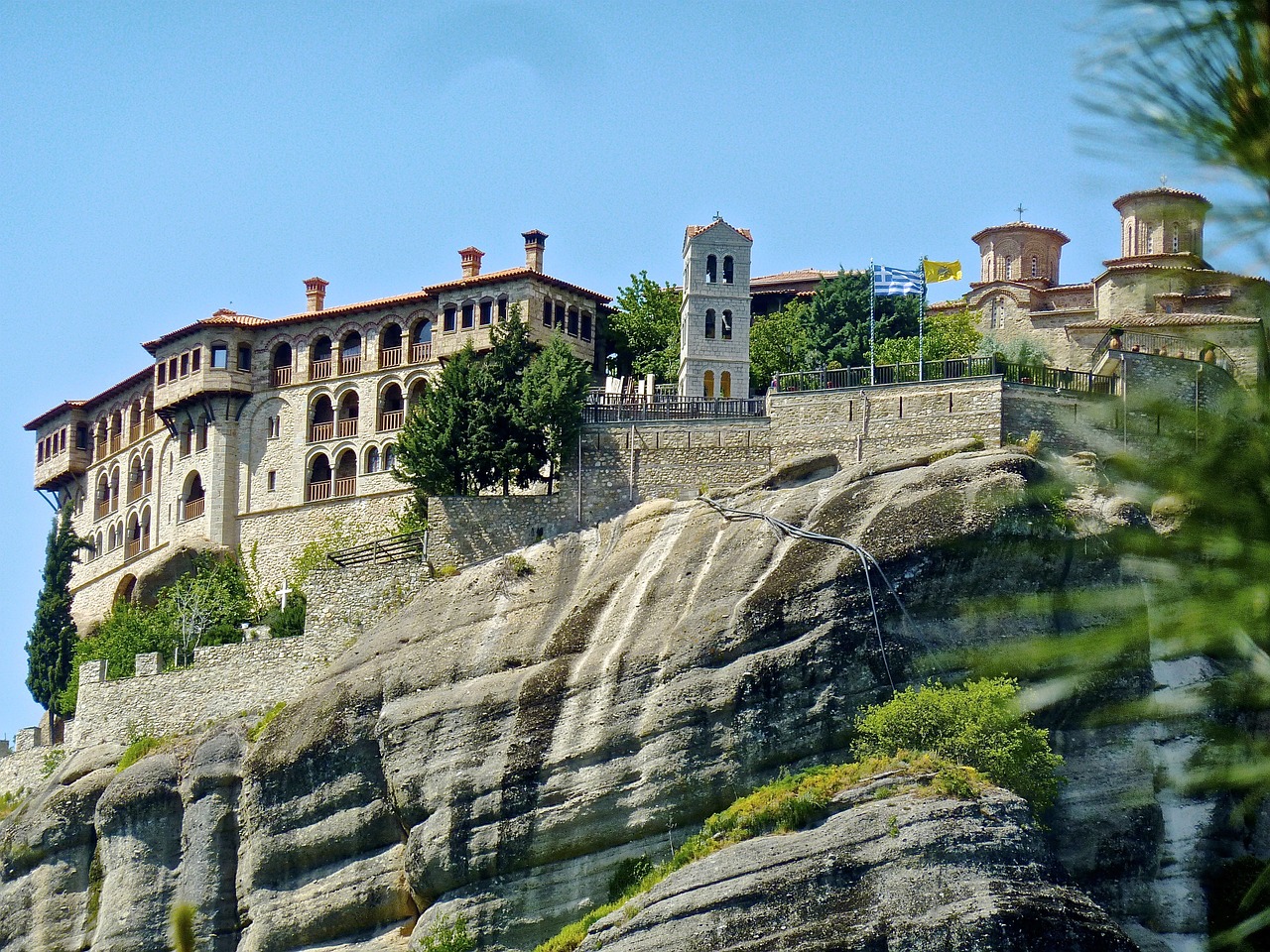 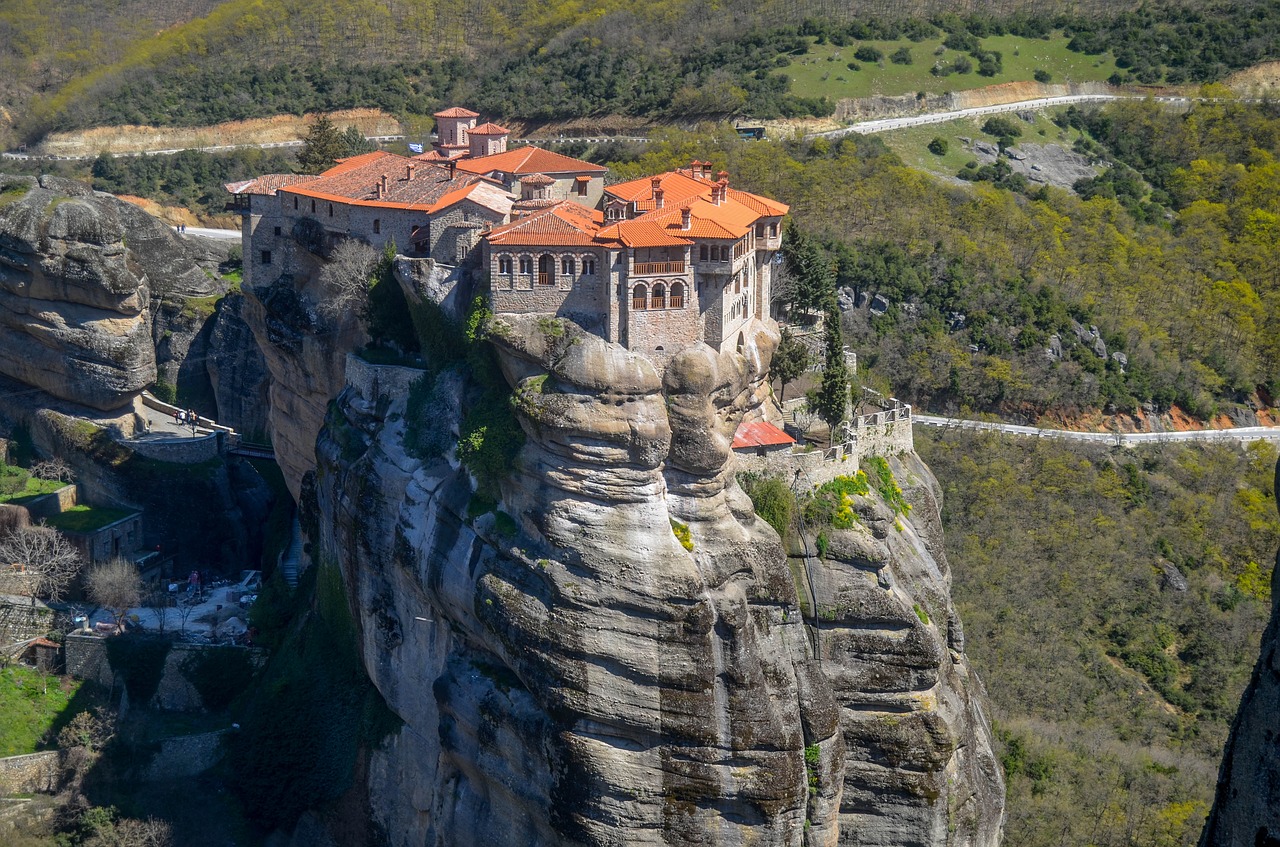 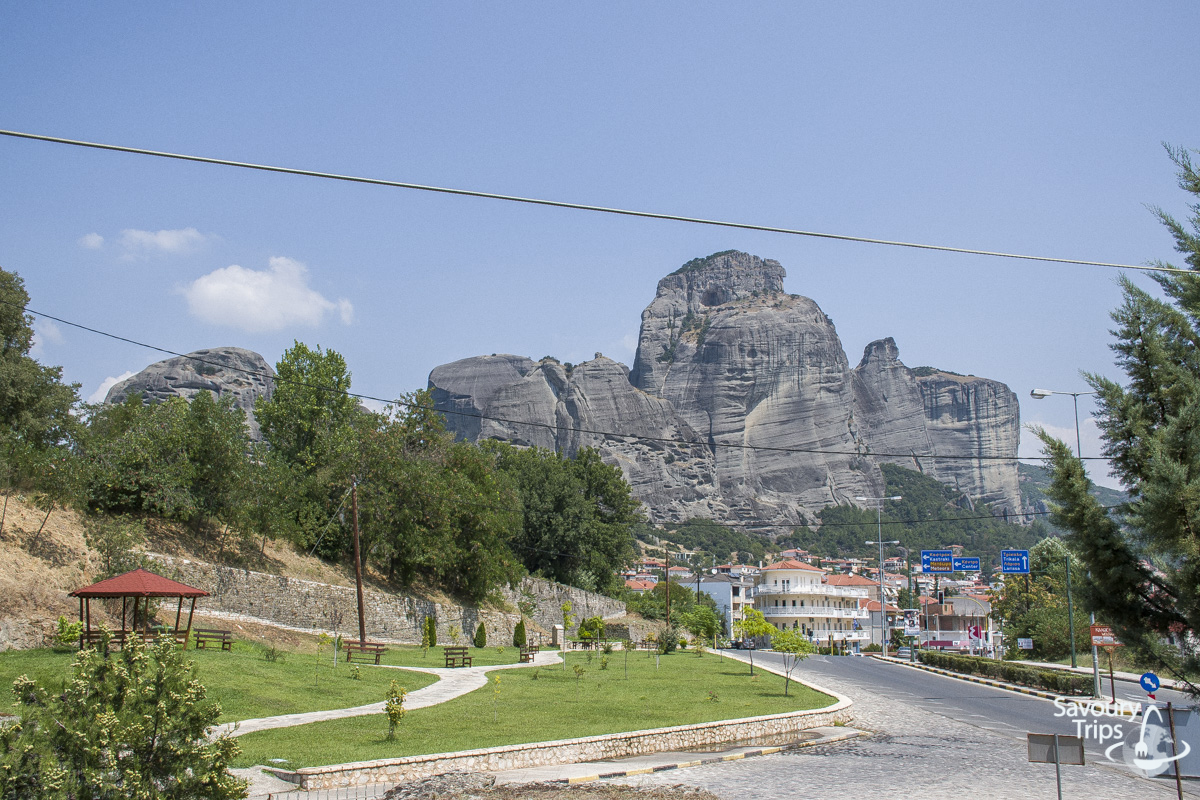 If you want to visit them you have to be properly dressed with shoulders and knees covered. If you decide to visit them, find the information on when they are open for tourists, because some monasteries are closed on certain days of the week. 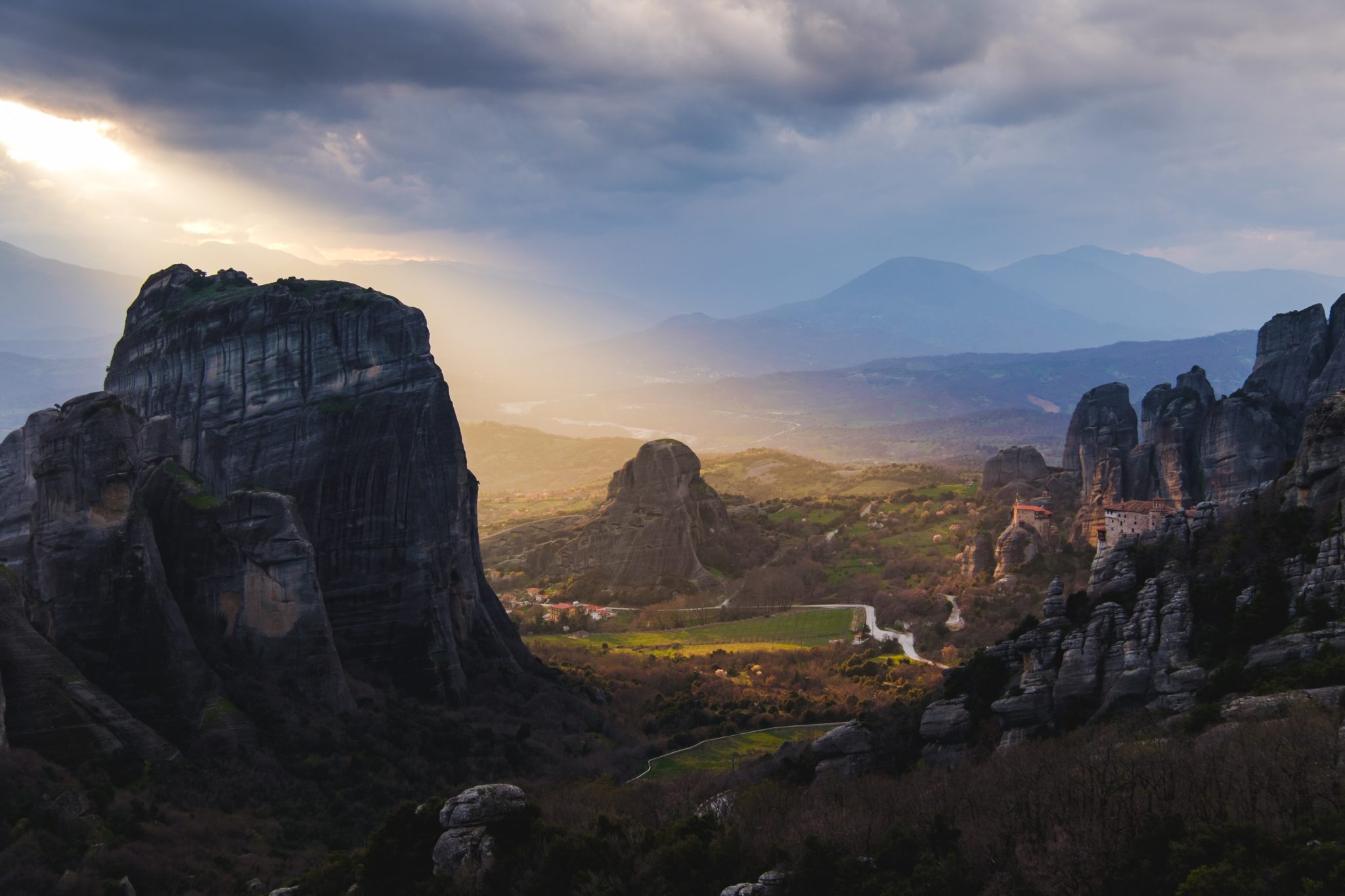 Meteora is one of the destinations you should visit more than once in a lifetime.

On this site, you will find what you can see there, as for where you can stay the best information is here. 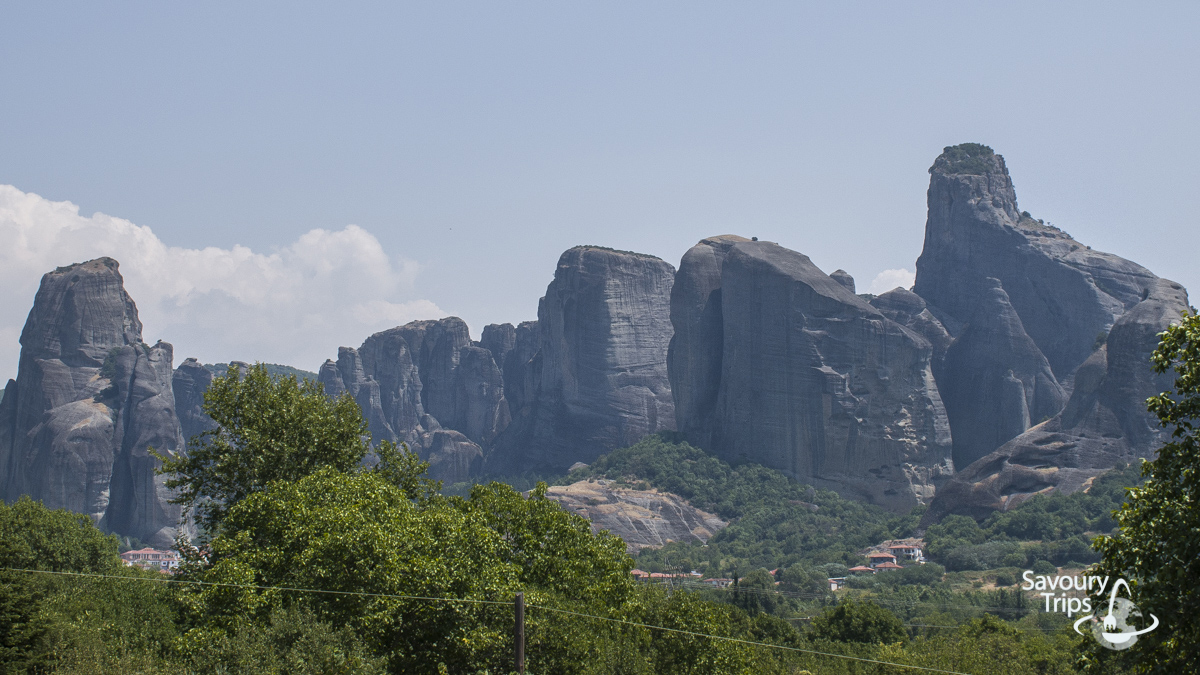 View from the road on the rocky Meteora

If the trip to Lefkada is too long for one day, you can stay the night along the way.

This was our option: right after the entrance to Greece: Kotza Ntere

River near the house

For those who are coming by plane all around the world, Lefkada has its airport in Preveza. After the airport, you can take either the KTEL bus or rent a car and then drive again through the underwater tunnel.

Bus for the entire trip is also an option. Where you will get on a bus, whether in your hometown, Athens, Aktio, Agrinio or some other town in Greece depends on how you imagined and organized the trip.

As a connection to the other islands in the Ionian Sea, you can use ferry lines. Depending on where you want to go, they can be bigger and more rare, or smaller and more frequent.

You can, of course, always go by bicycle, motorcycle, and camping vehicle. Beside stamina, you also need good equipment. 🙂 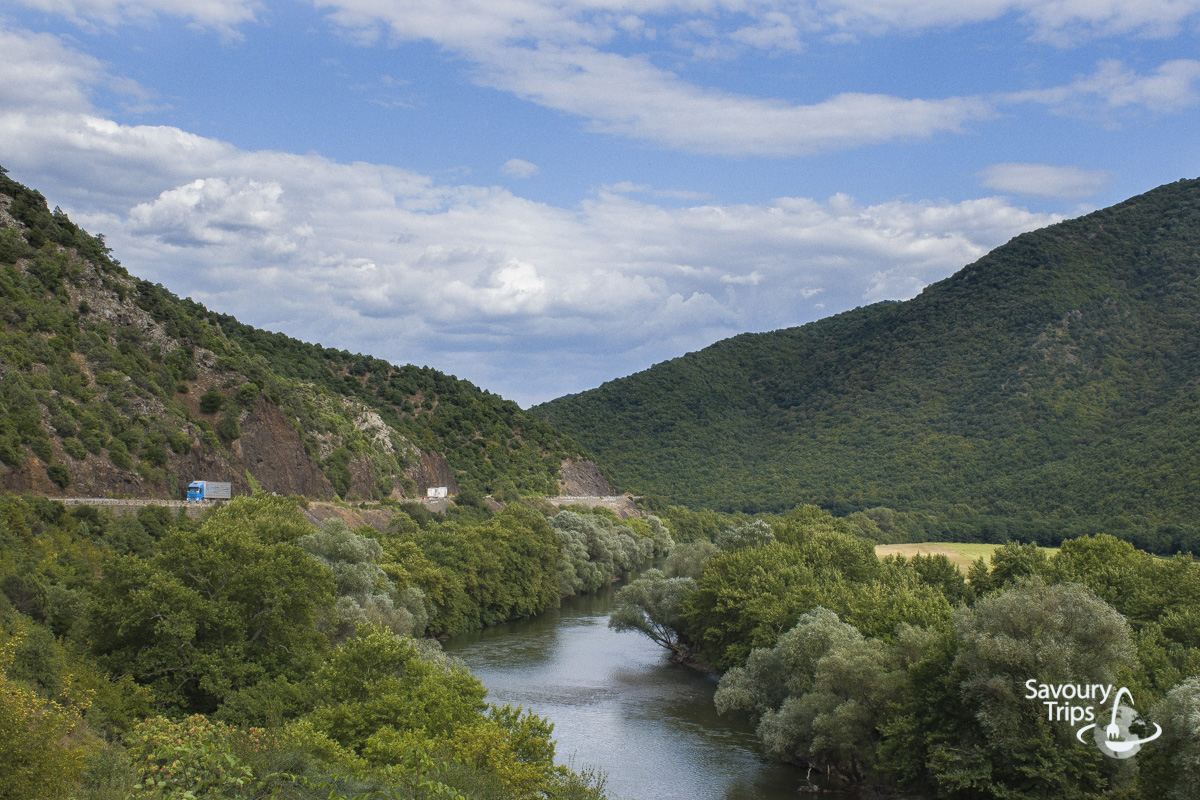 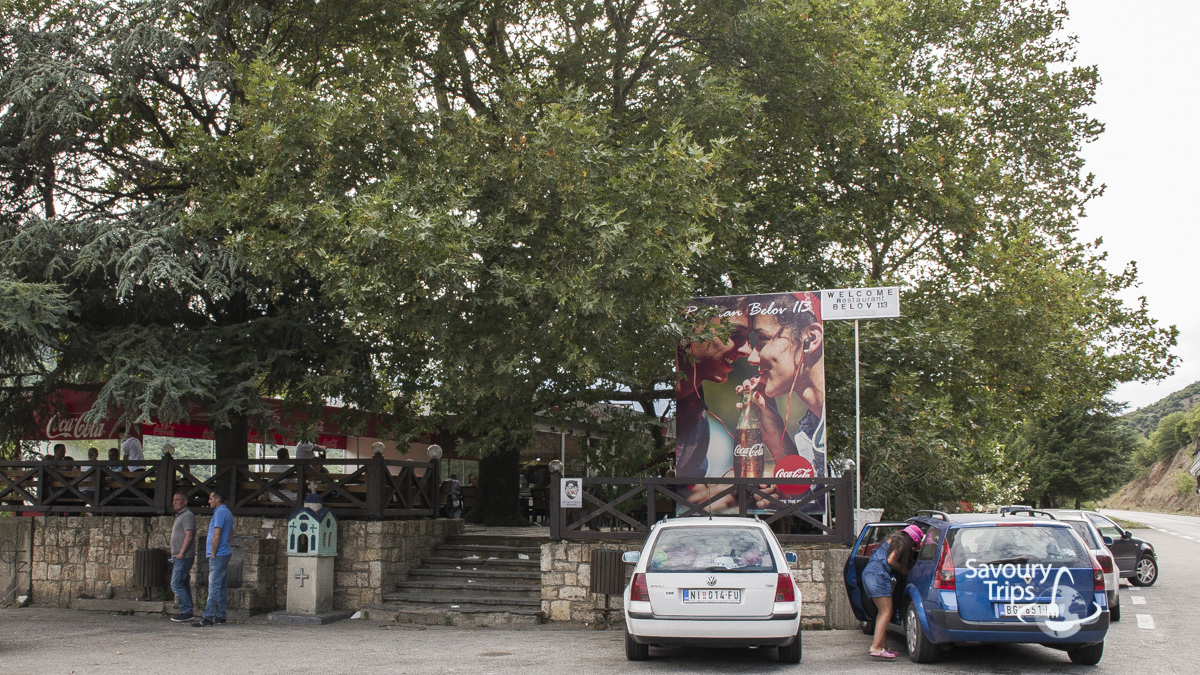 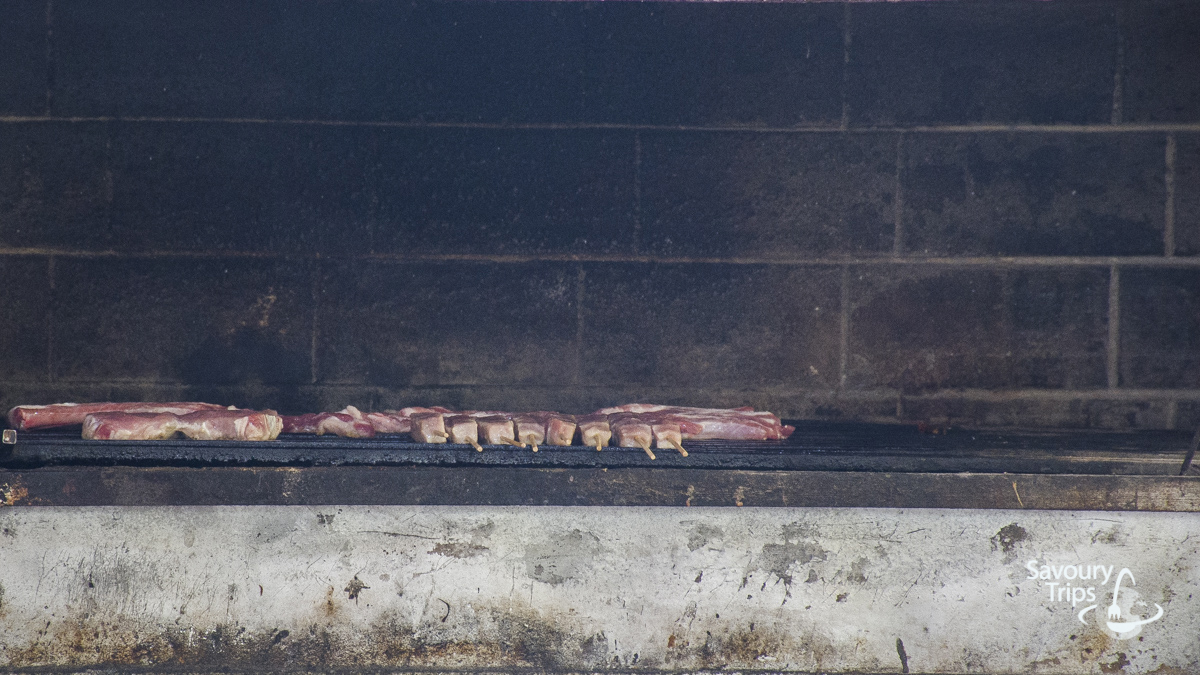 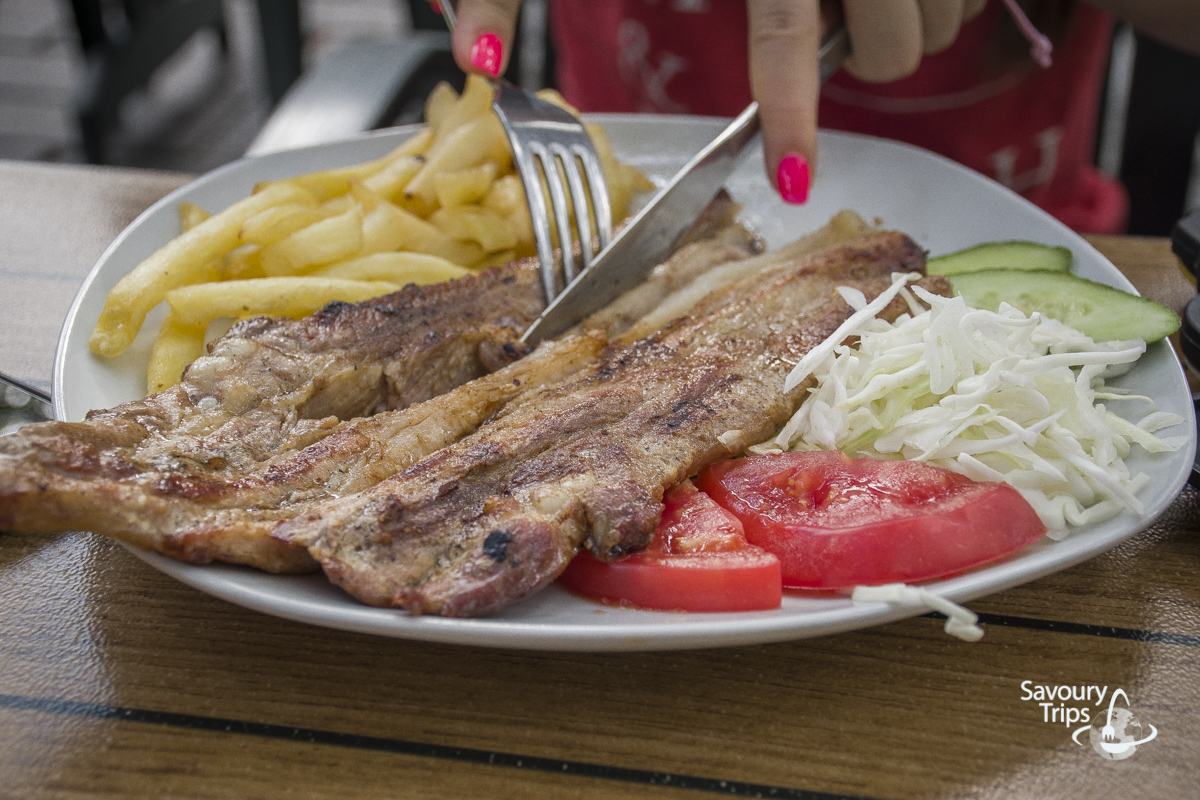 You eat your own sandwich.

But you can also eat the industrial one (Everest).

Getting around on the island

We always traveled by our own car so we didn’t need to rent a car. Without a car or a motorcycle, it’s as if you haven’t even been on the island. So, if you don’t have your own car, rent-a-car is a must. You won’t regret a euro spent on it 🙂 .

Since I have been there a billion times, on both the west and the east coast, I will tell you my favorite accommodations.

I strongly recommend you to book the accommodation months before, (a year even), because many people visit Lefkada and in May or June you may not be able to find something that meets your expectations, or it will cost a lot.

In general, Lefkada is not an expensive island, but I like to take care of everything, which includes where I will stay and how much money I will pay.

Right next to Nydri, the center of all the events on the east side there is a romantic place called Geni. It’s romantic because all the accommodation is situated on the coast, and it is peaceful and quiet. My dream accommodation, where I have been on holiday numerous times, is the apartment of Korakias villas.

My dream accommodation, where I have been on holiday numerous times, is the apartment of
Mrs.  Eleni – a very unusual woman. She is a rock star in her soul, with a great sense of kitchen and cooking.

The complex where the villas are is called Korakias. Big property, separated from everything, with its own beach and pool. There are three villas in total on the property, and five different apartments to rent (their names are Olive, Cherry, Lemon, Mandarin, and Orange).

We rented Cherry every year. 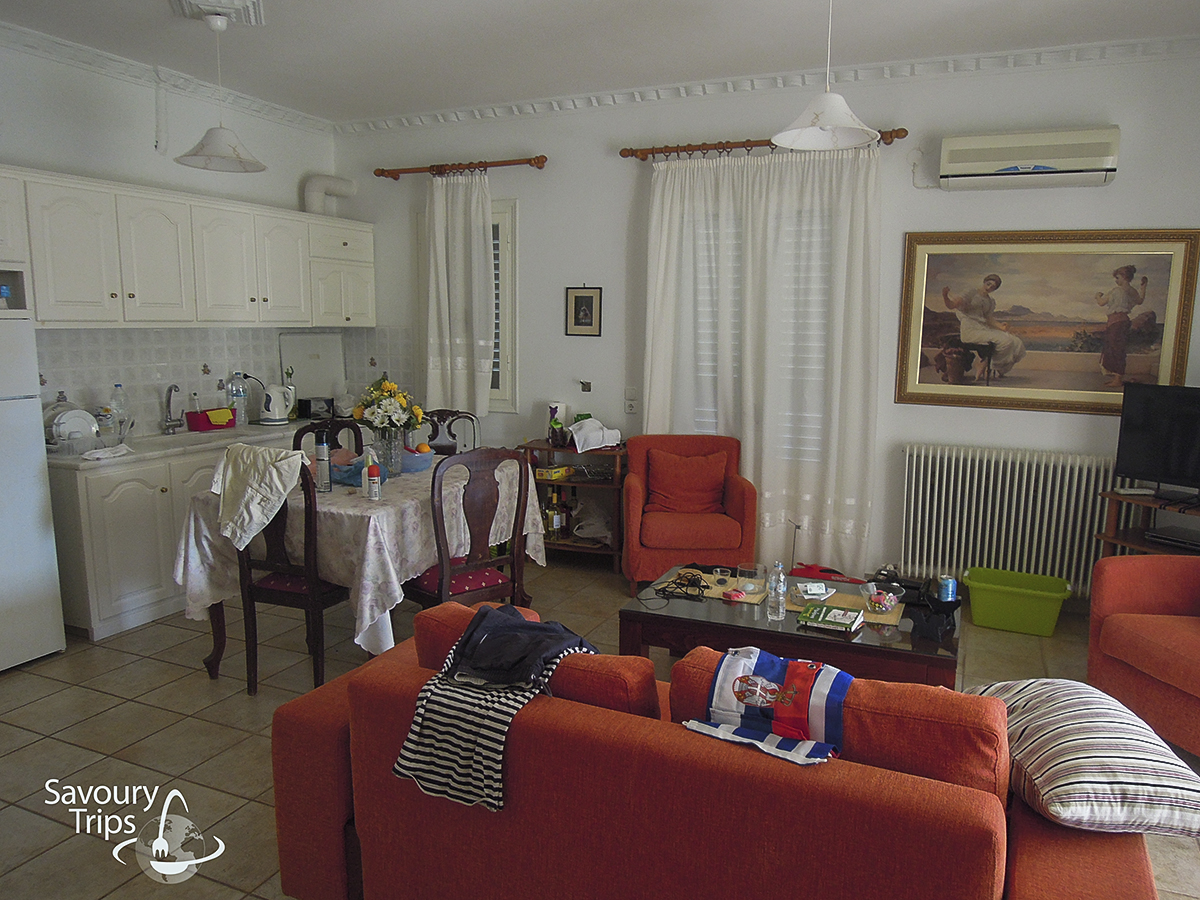 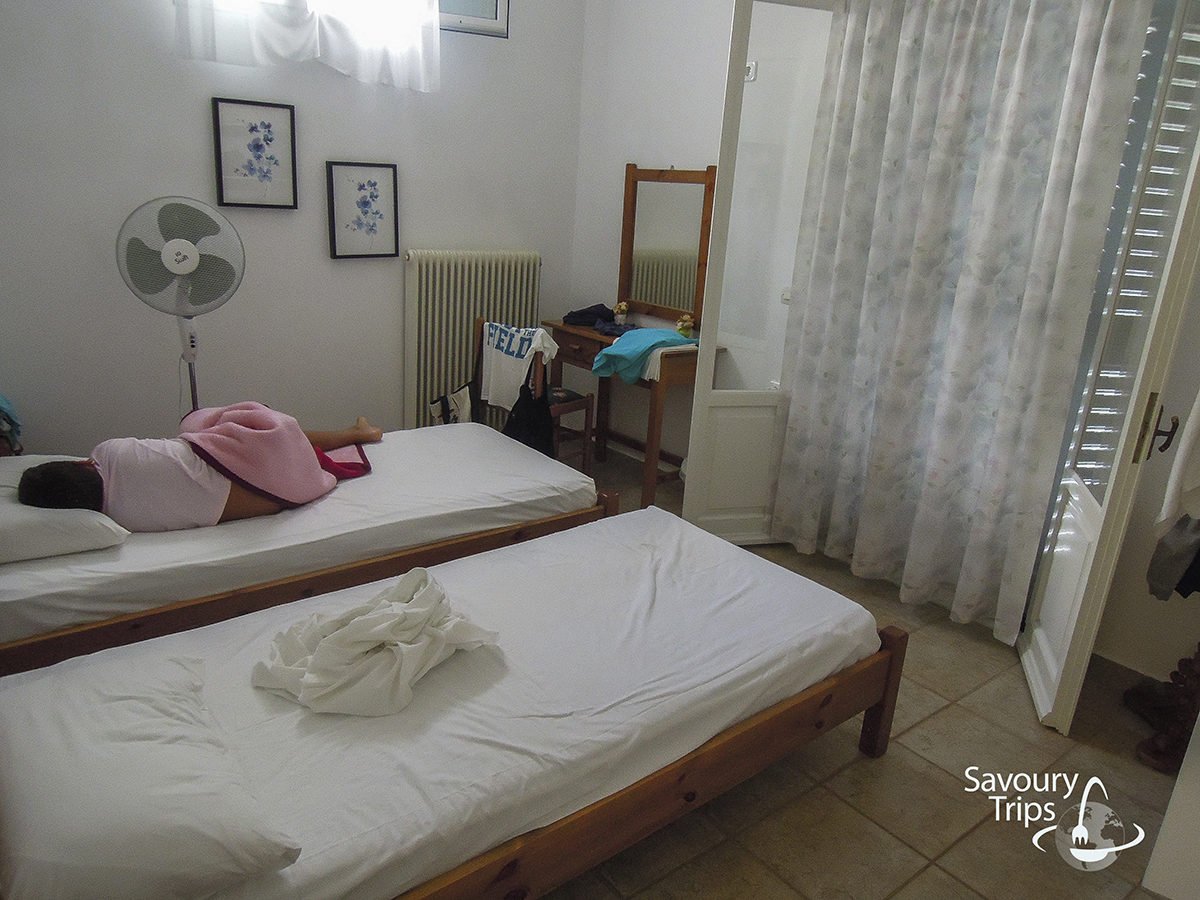 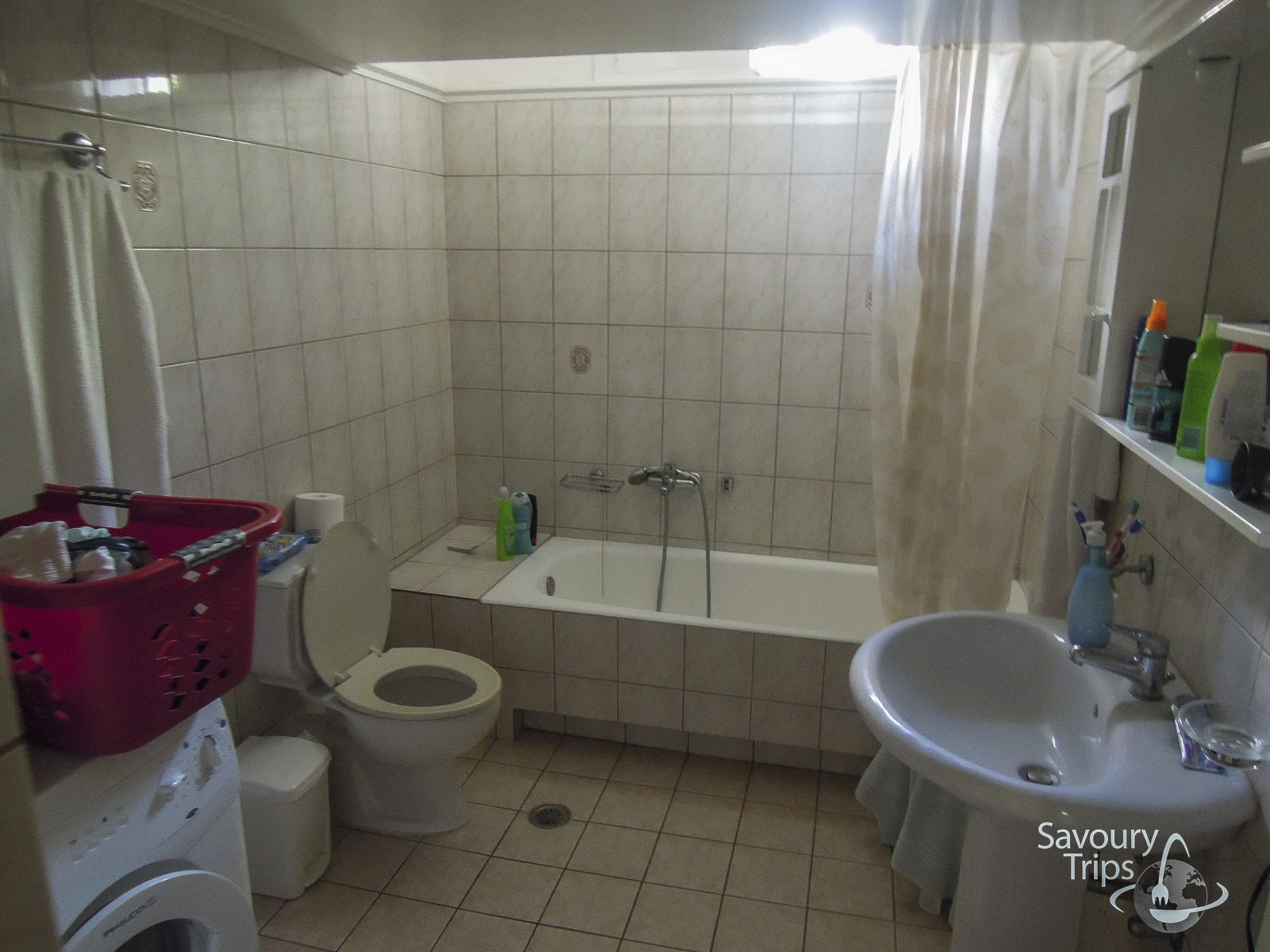 And finally… a beautiful terrace with a sea view. 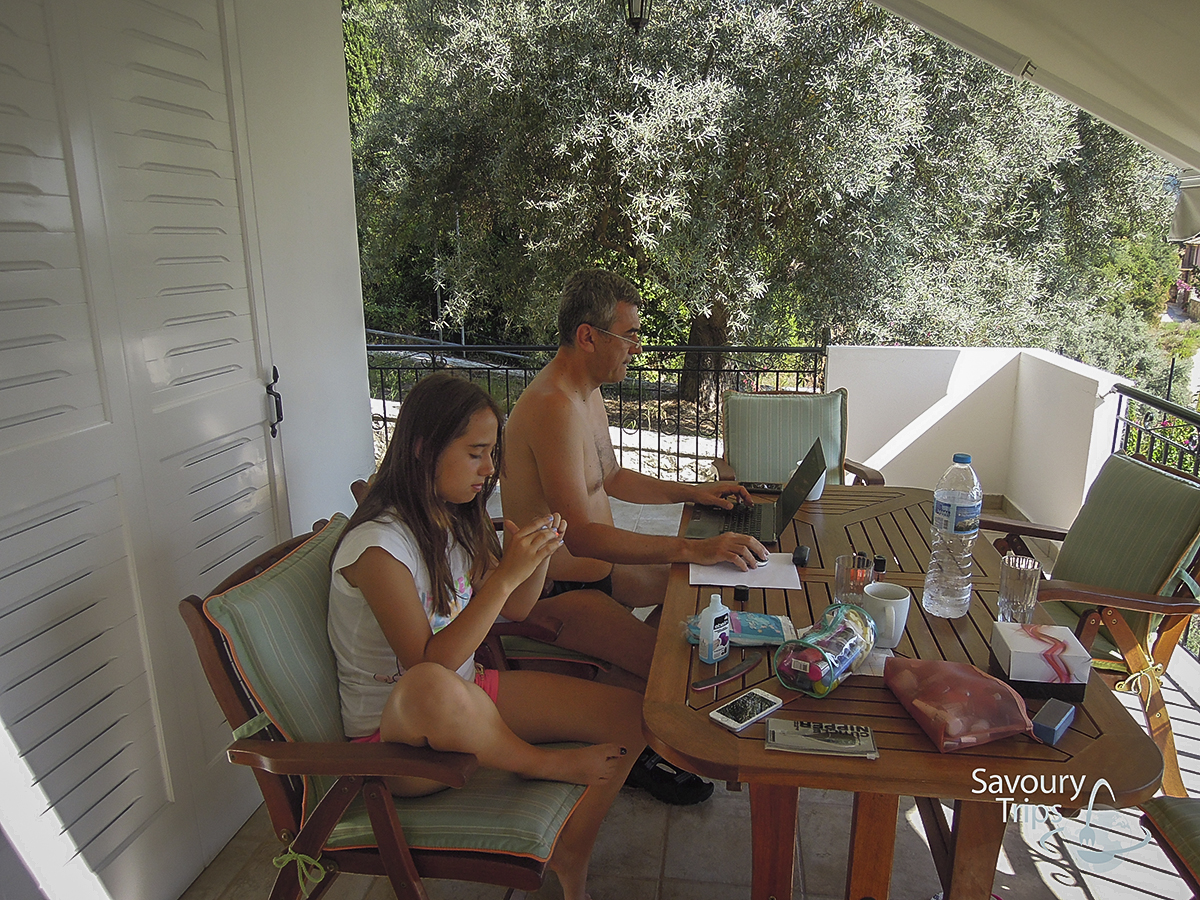 In any case, we are at the same address this year as well 🙂 .

West coast is for those a bit younger. It is much wilder. The ideal location to settle is called Tsoukalades. It is located very close to the main town Lefkas, and the beaches are not far away. We already said that being on Lefkada without a car is like you haven’t even been there.

We were in a complex which was organized a bit differently, and the houses were bigger. This is excellent if you manage to organize your holiday with someone else and split the expenses like we did for example. 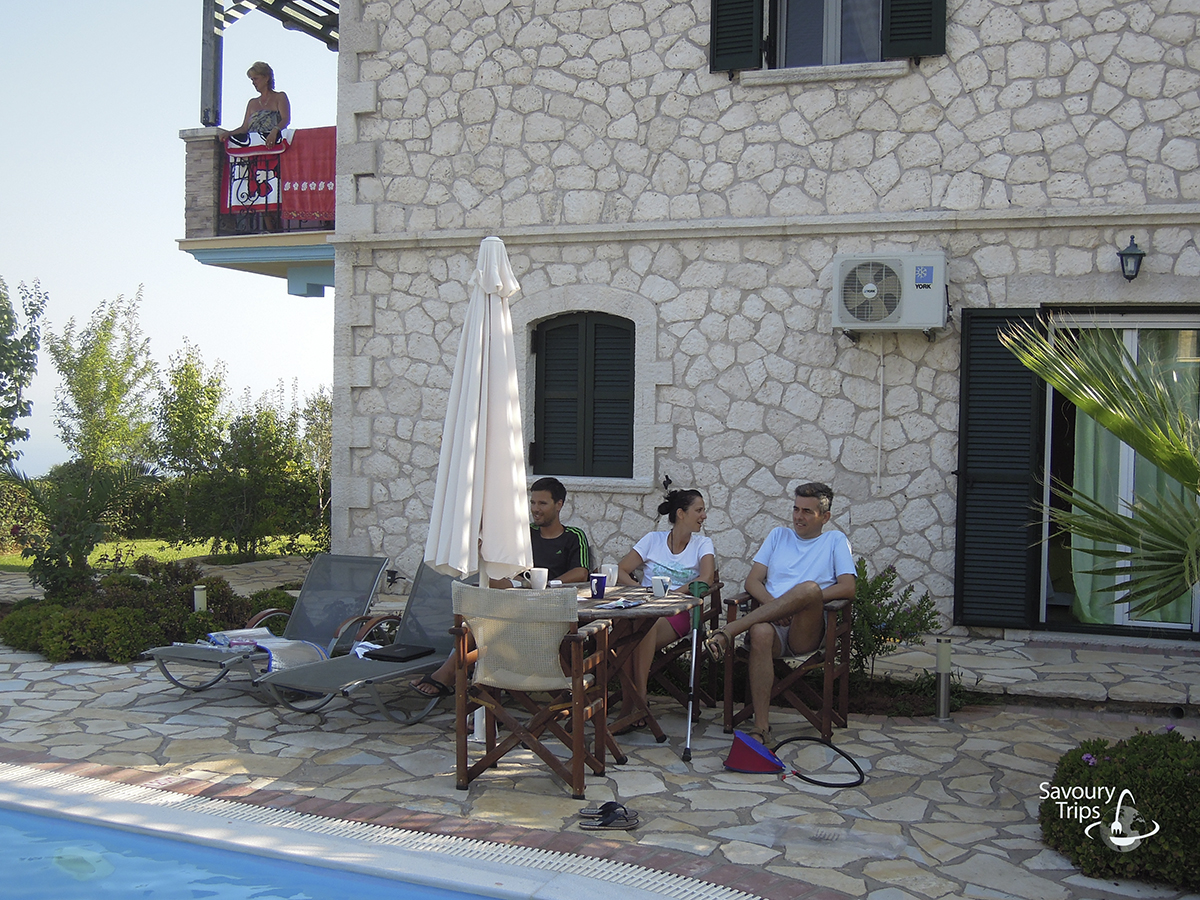 House for 8 persons with private pool

The yard and she (then she was still small)

Every house had its pool, which wasn’t small at all and everything else that you could imagine. If there are enough people with you, this doesn’t have to be an expensive option at all.

Another side of the house

Backyard with flowers and parking place

To put it simply, there is everything 🙂 .

In the town of Lefkas there are supermarket chains which are the cheapest (for example Lidl), and in some places, there are shops like Vero, and on every corner, you can find private shops.

What not to do on Lefkada?

If you are temperamental, restless, and have to be in constant movement and have pictures change before your eyes all the time… don’t go to the big boats that go around the island… for an entire day. 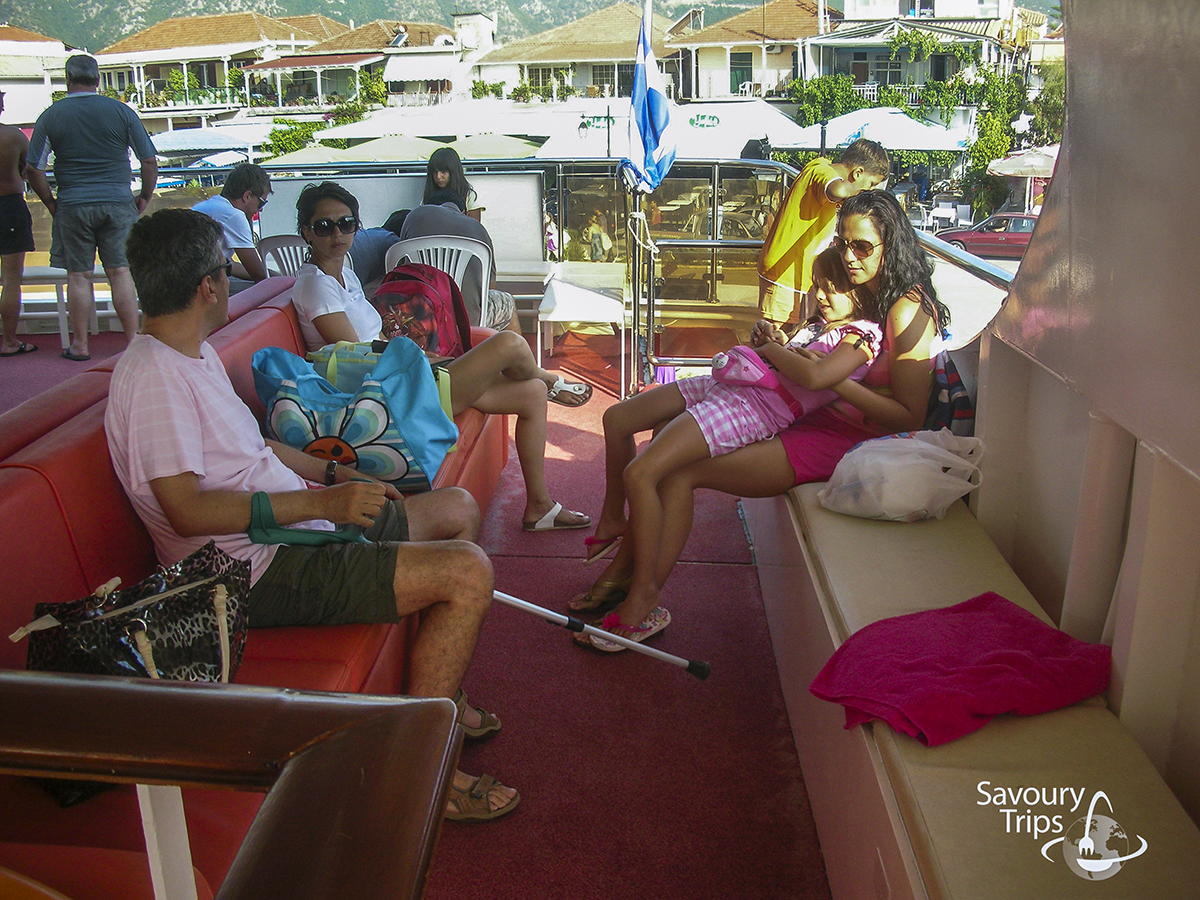 I mean, it’s not that bad…for some people… but for us it was boring. You can’t swim when you want and when you’re hot… When the sun is scorching hot you don’t know where to go…I mean everybody wants to go in the shade, and the shade is not that big… So I don’t have to say what that looks like from a side 🙂 it is also leaned on that same side 🙂 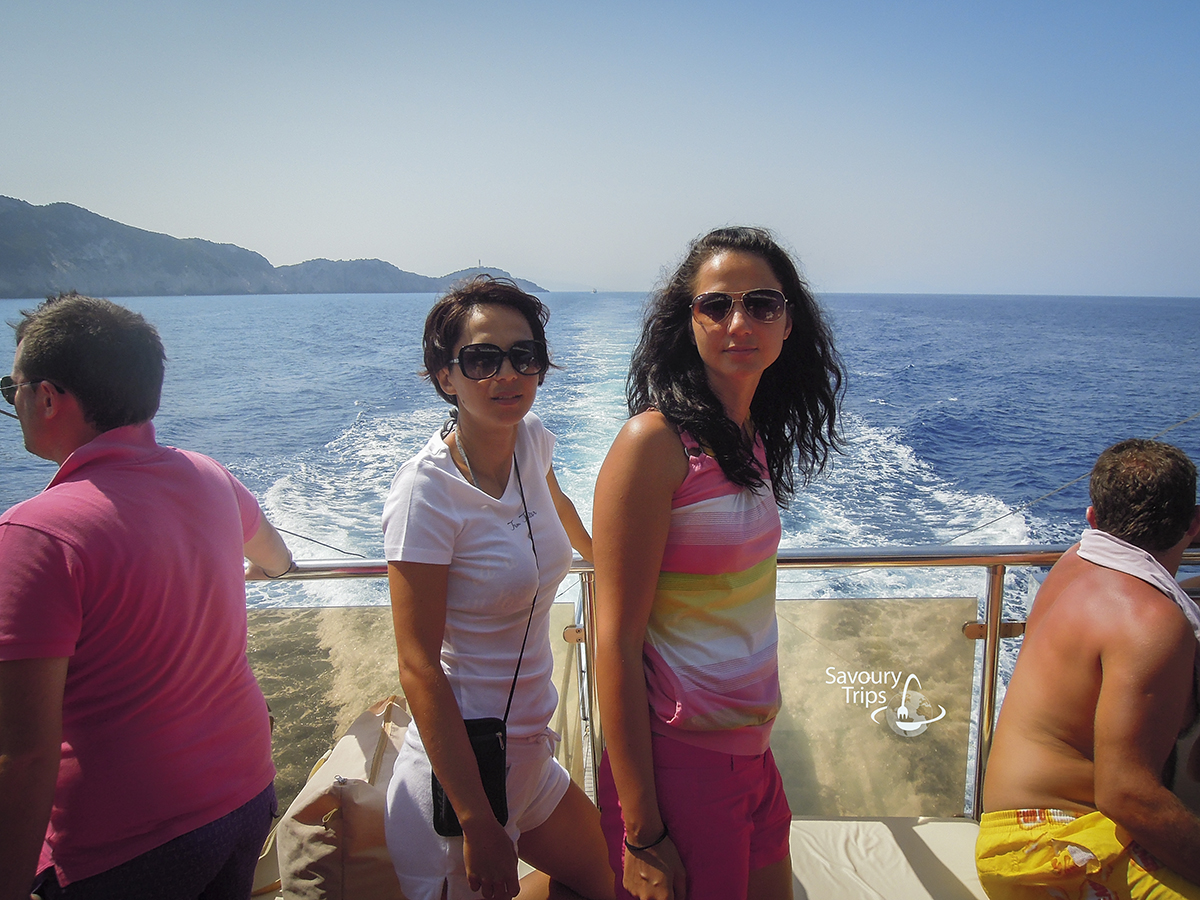 Lets sisters to make some photos together, still full of enthusiasm

On the best beaches you only stop for a while, and some of them you can see only from afar… and by car, you can reach them anyhow (ok, not all of them now… but we’ll talk about it later) 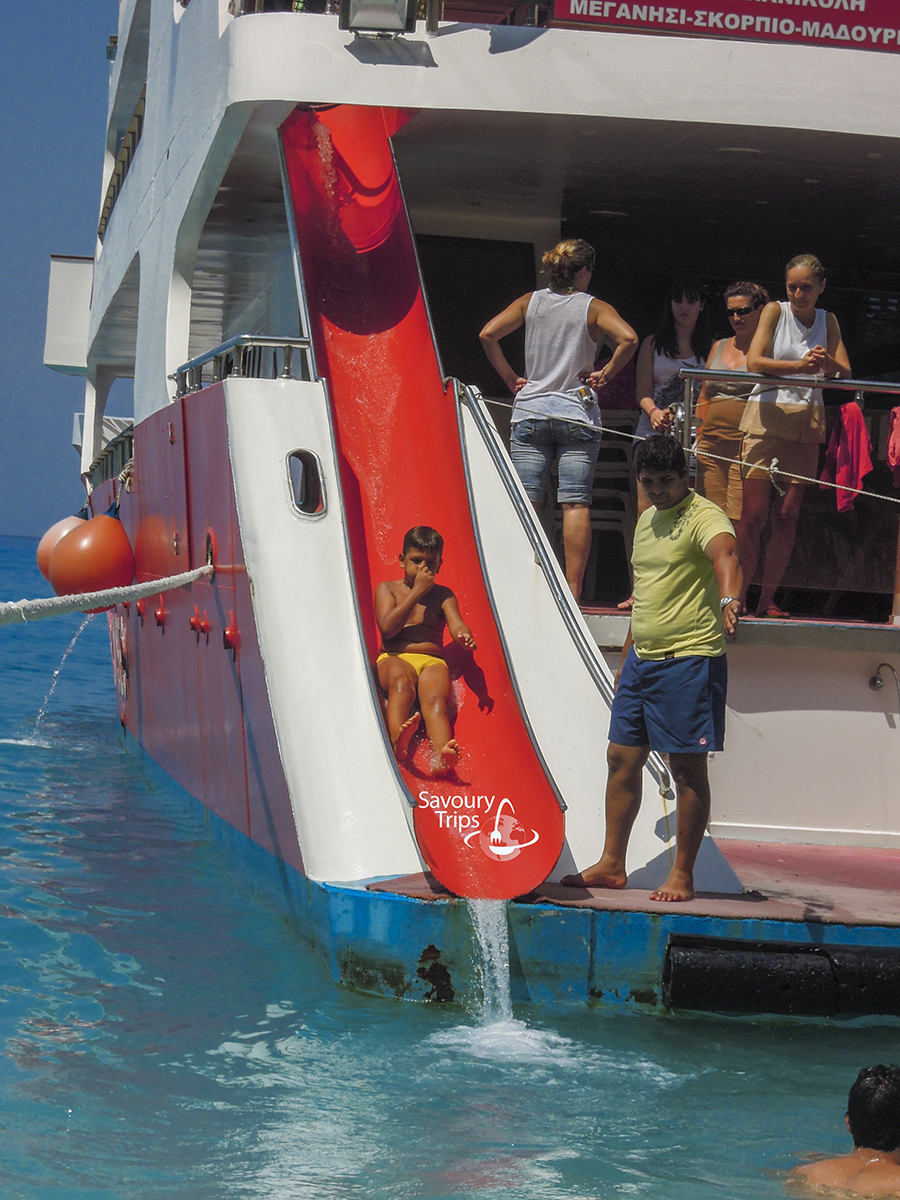 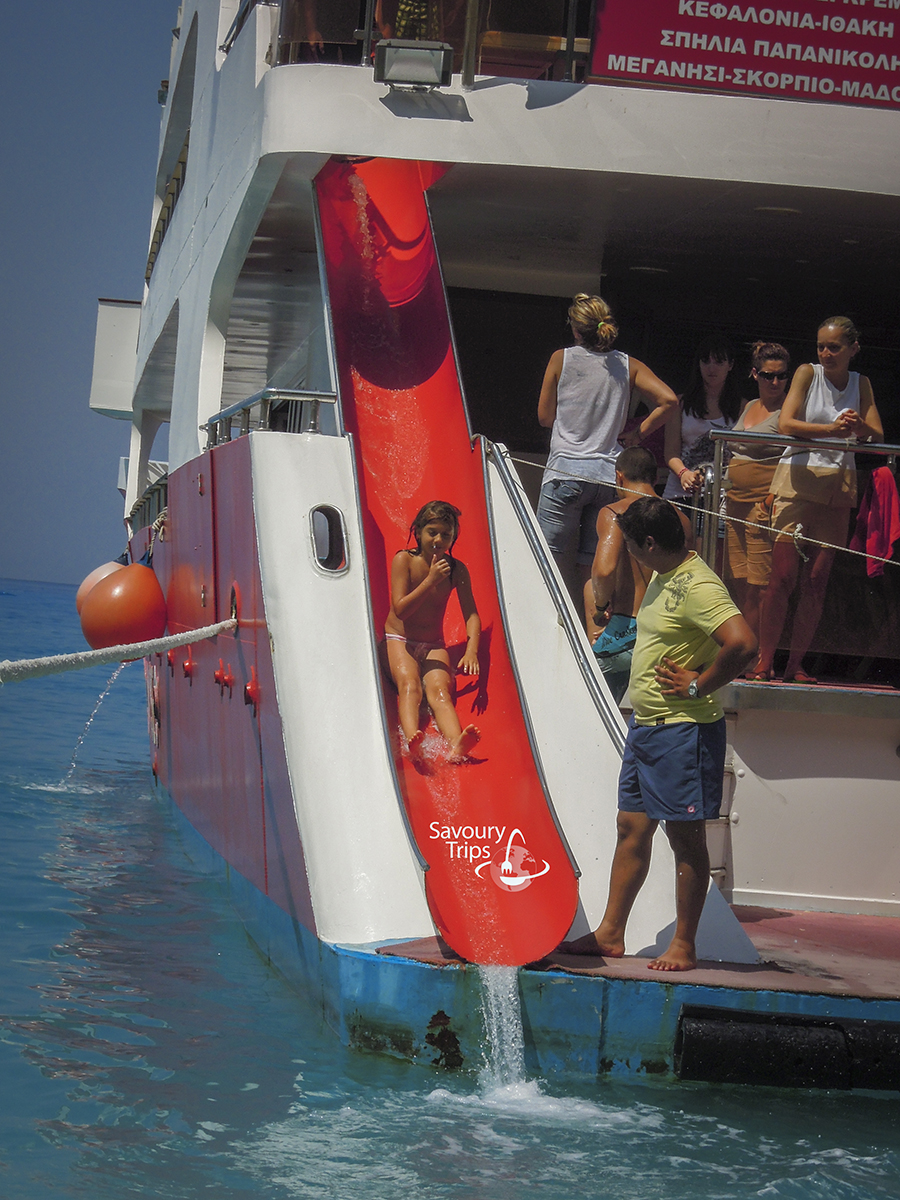 Our boat didn’t have lunch included, so we brought our own food… it had a little shop but you could only buy snacks there… 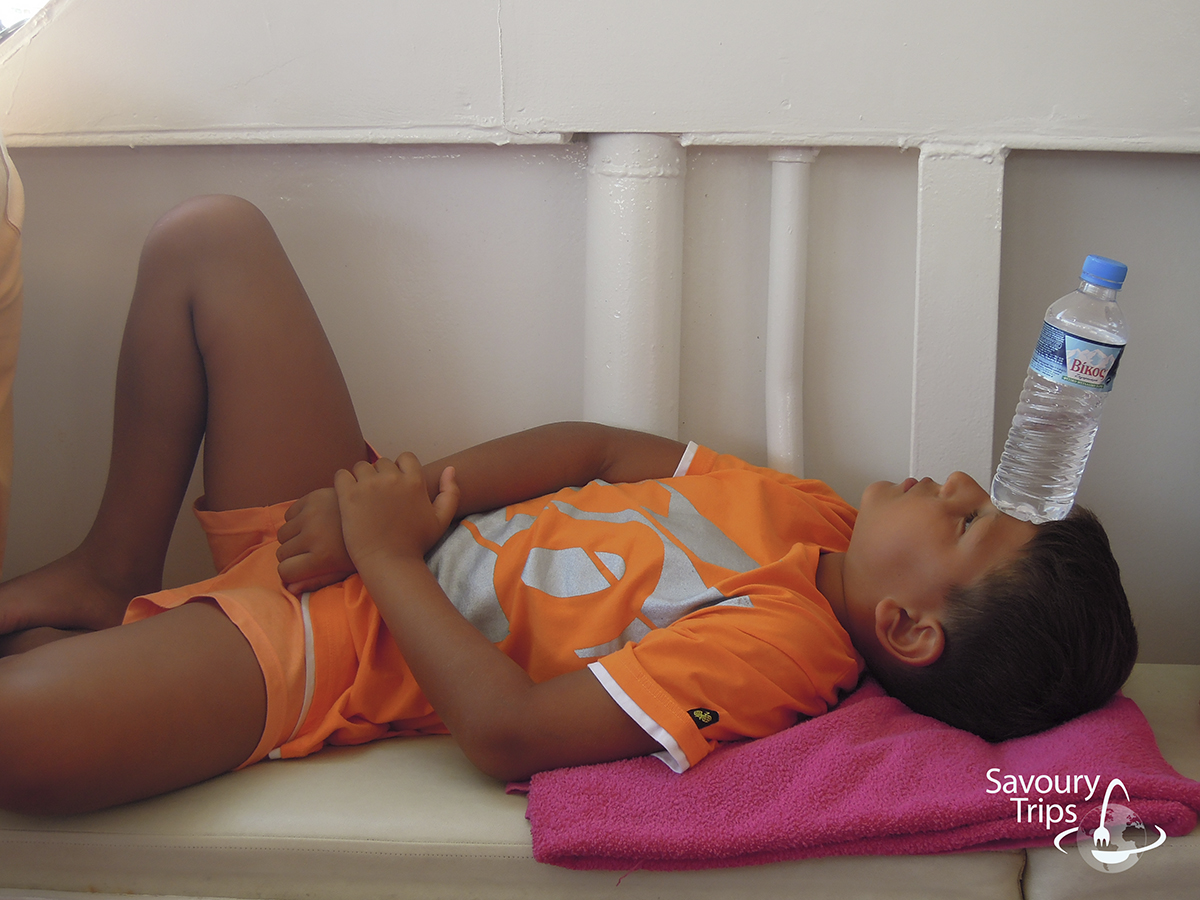 Now we did not know what to do with ourselves 🙂

Now, not everything was so bad…the good thing is that it can take you to Fiscardo on Cephalonia (but for that you also have a ferry from Nydri), you can see the cave on Meganisi… you can only do that if you have a boat  🙂  and you can swim on the coast of Onassis’s island Scorpios (but let it be our little secret – you can do that as well with a rented boat 🙂 ). 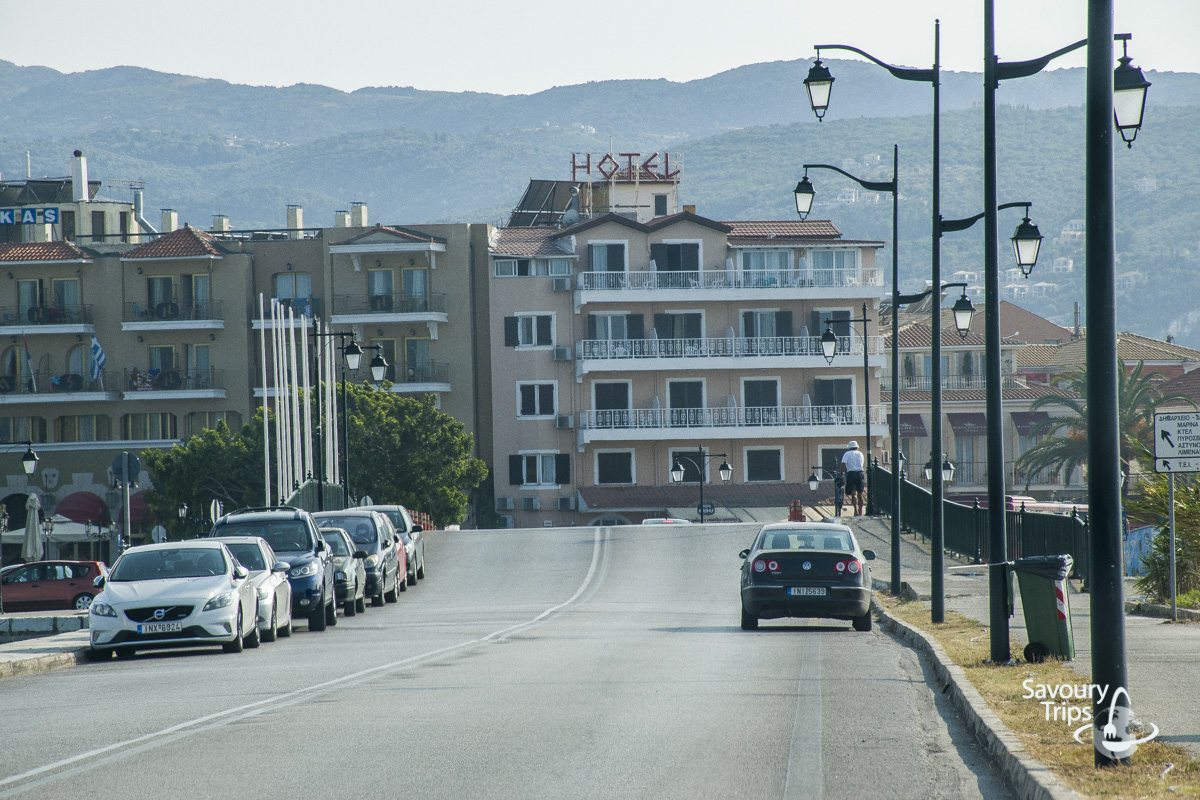 We have already arrived, entering Lefkas

What to do on Lefkada?

Oh, there are a lot of things… swimming, excursions, extreme sports etc…but we’ll talk about it in the next post 🙂 .

What’s not to miss on Lefkada?

Well, lamb 🙂 but more about it when we come to food. I will take you to a heavenly place (where you need to book your place every time). But once you’re there you’ll forget all the rest 🙂 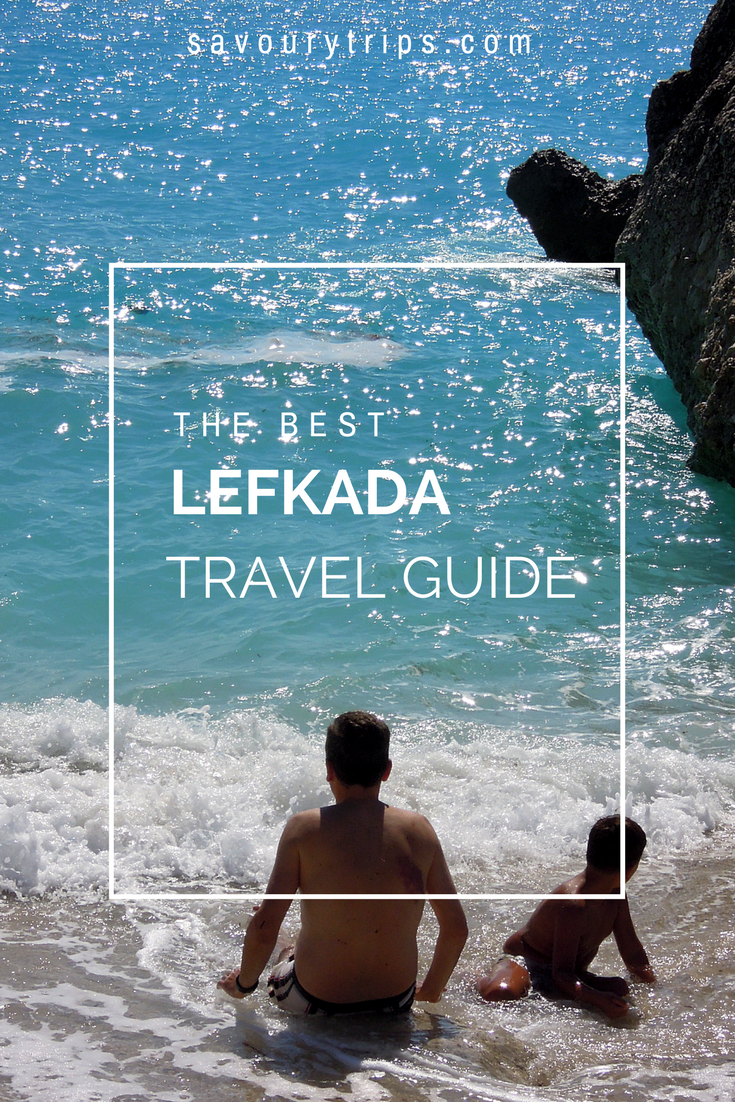 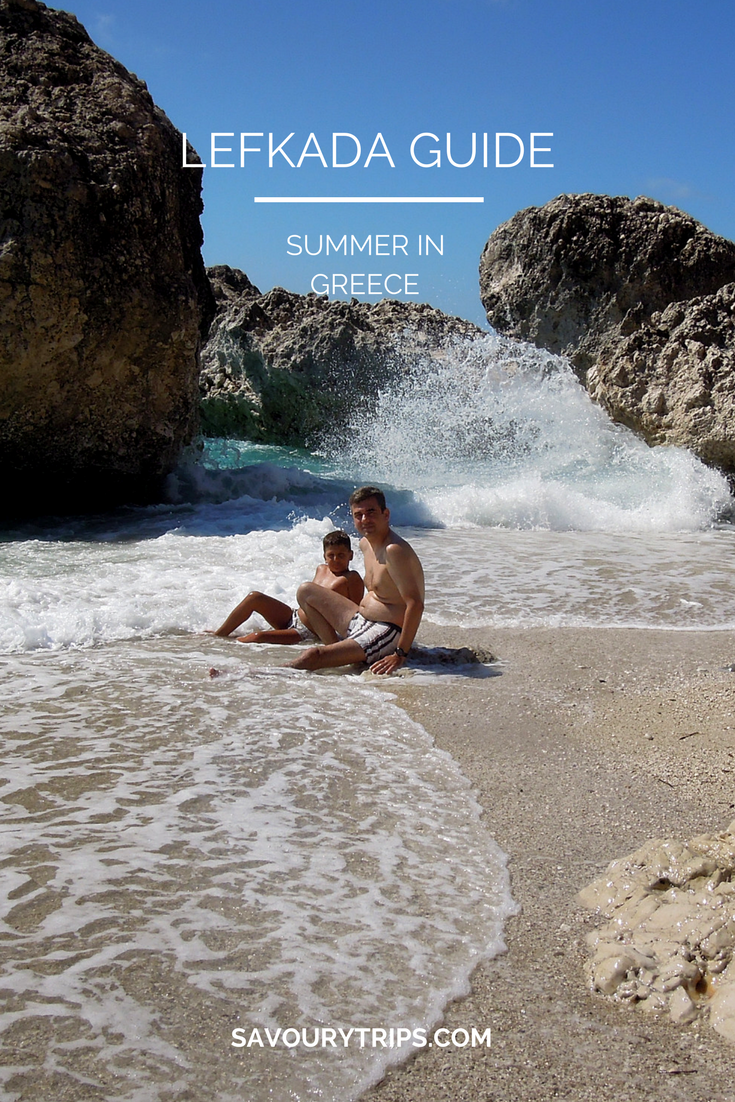 Dalmatian food that can make you better lovers
How did we survive the first shipwreck and become sailors on Lefkada?