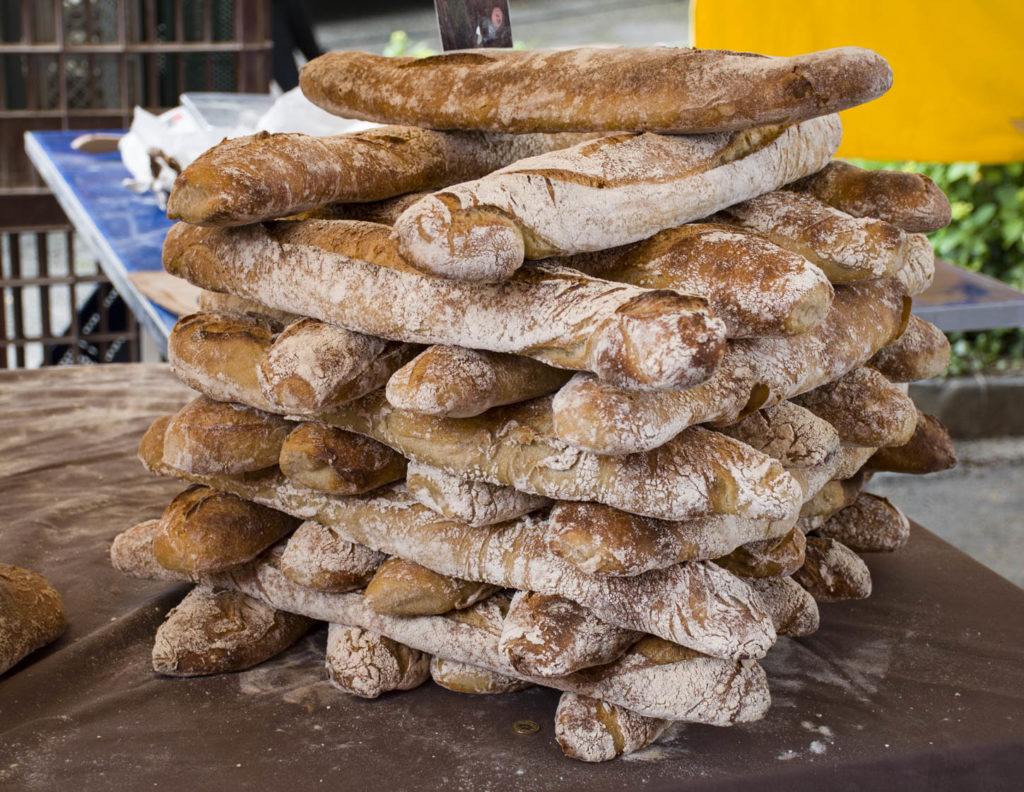 A trip to France, Ferney Voltaire

What was our trip to France like? Pretty spicy, refreshed with some new combinations of flavors and aromas from different meridians.

There’s one interesting little town in France, that is worth paying a visit, if you’re already in Geneva, or in the neighborhood.

You probably wonder what has a French town to do with Switzerland.

Ferney Voltaire is a town right on the Swiss border and some ten-minute drive from Geneva, i.e. Versoix. If you already happen to be in Geneva, I recommend paying a visit to Ferney Voltaire and enjoying what France is renowned for worldwide, and that is food and drinks.

The town is first mentioned back in the 14th century, and what it is famous for is a big marked that is open on Saturdays. What shouldn’t be neglected either, is a great international community that has developed here because of the existence of the UN headquarters in Geneva.

A huge number of people working in the UN offices lives in Ferney, because life there is significantly cheaper than the one in Geneva. The town got its other part of name after a French philosopher and poet Voltaire, who, after being banished, settled in Ferney.

In the central town square, which is the central part of the market on Saturdays, there’s his monument today. Nearby the city, Voltaire built the castle, Chateau de Voltaire, where artists from all over the world gather nowadays. At the moment when I was there, unfortunately, the entrance to the garden was closed for restoration, i.e. works. As you can see, there’s a point in organizing a visit to Ferney Voltaire when traveling to France after all. 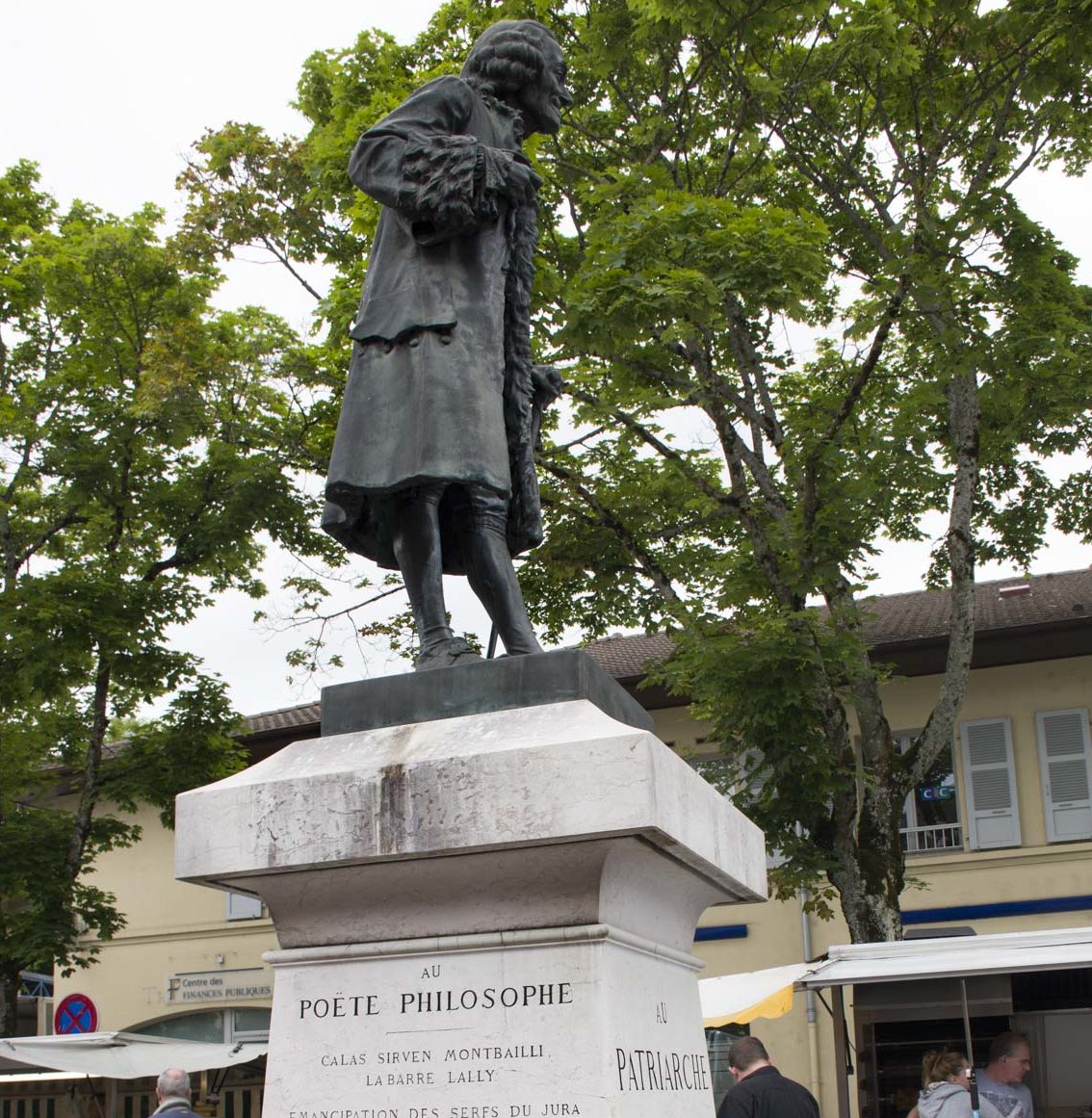 How did we end up in Ferney?

In order to experience the spirit of a country best, and fit into the everyday life of the region I visited in a short period of time, I always go to a local market first. It is mostly so because I love wandering and meander around the market, and thus I get new ideas that can be mixed in the pot. First of all, you can see everything you need there, and also, what the locals would naturally try to hide from you, when they want to introduce you to their home town. On the other hand, as most of the people working in the UN do, we also made plans, so that the trip to France and Switzerland was as economical as possible. A well-known fact is that the food in France is cheaper than in Switzerland.

Where can you stay in Ferney?

Unless you’re just a wandering traveler who just wants to visit the market, but you also need to spend the night and enjoy in the wonders of France some more, and Geneva not being far away, too, there’s a couple of hotels offered.

After all, the stay in some of the Ferney hotels is a significantly cheaper solution, than staying in the hotels in Geneva.

Since the market shows how the day would be, as for cuisine, I think it’s dead heat between the French and the Italian, whose cuisine is better and more delicious. Principally, it depends on your taste, and so did this trip to France.

Traditional French food is based on simple combinations of flavor, improved by adding some natural aromas of spices they use.

Just like the Italians, the French have their diet rituals, lunch that usually consists of three or four dishes: appetizers, main dish, cheese, and dessert.

Cheese is usually served at the end of the main dish, but before the dessert

The most famous French cheeses are:

From the Ferney Voltaire market

More than three hundred seventy kinds of cheese are produces in France, and each of them brings with them something from the region where it is originally made.

I would be very surprised, had I not seen all of those cheeses in one place at the market. You could taste it too, and I bought a bunch to bring home, especially these goat and cow ones.

This is what one of the stands looked like: 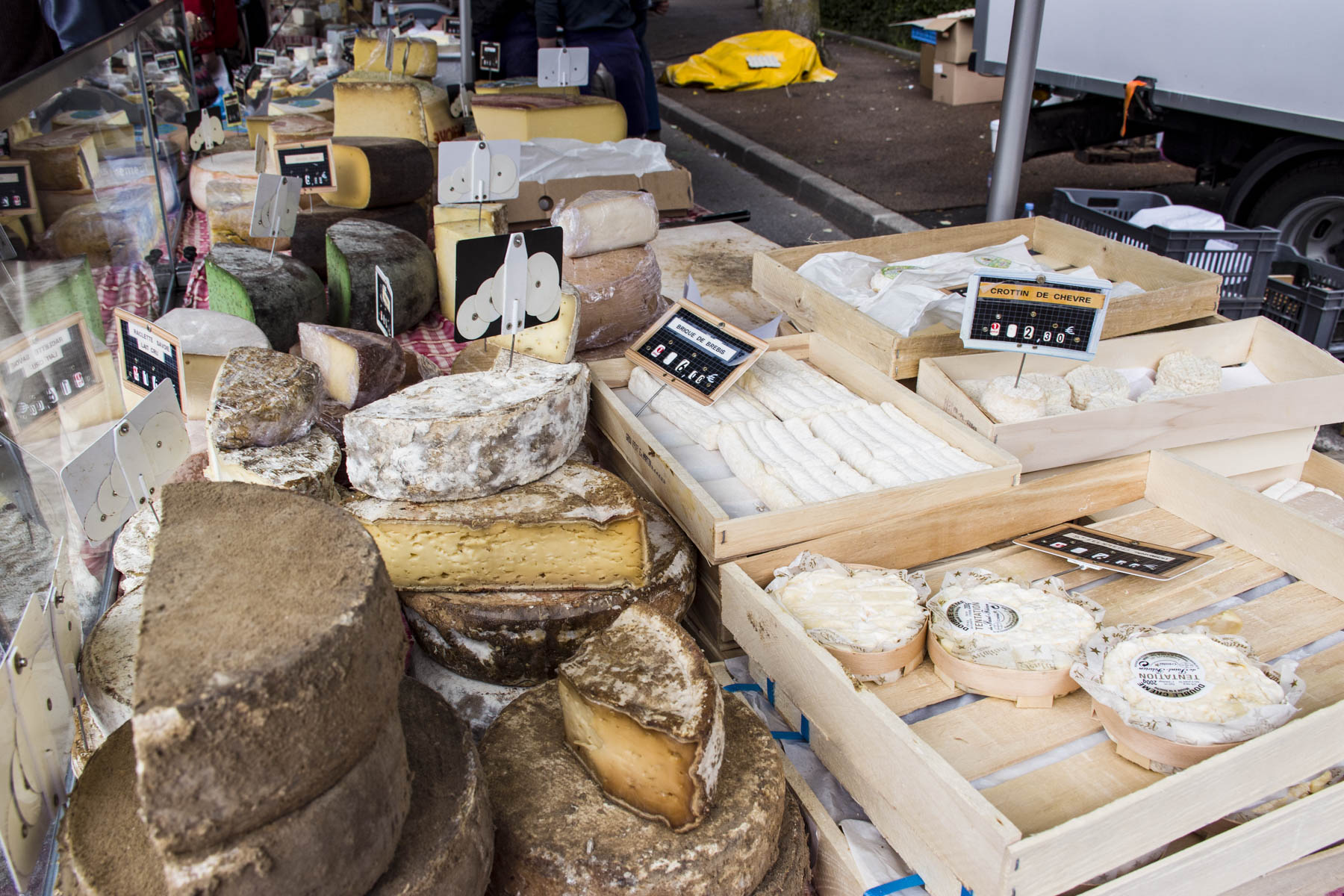 A spicy trip to France

Spices have an important place in France. There were spices from all over the world, because the purpose of the French cuisine is in different combinations of flavours.

You’ve probably heard of the famous Provence mixture consisting of marjoram, thyme, oregano, rosemary, and lavender, which is used for meat, but for fish and cooked dishes as well.

Nutmeg is used for sauces, for example béchamel and desserts. Combination of thyme, parsley, bay laurel, and pepper is used for soups. Saffron is used for the seafood.

What has left the greatest impression on me at this French market, was the part with fish and everything from the sea. I didn’t even know some things were consumed, let alone how they can be prepared. I wrote about Italian fish here, and this is even better.

The most famous French dish based on the seafood is Bouillabaisse i Bourride.

I cannot find the words to describe what it was like, so the photo will say more than I can.

Oysters, of different dimensions and prices

And then, crabs and other kinds of shells 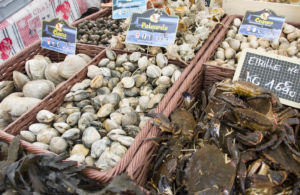 Does anyone know what these shells are called? 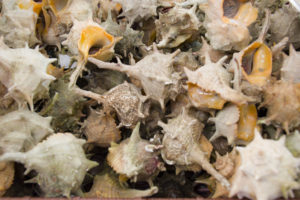 Krusty Krab and angler (it does look hideous) 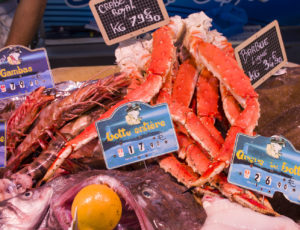 A fish, not Vanda but St. Pierre and great Scampi 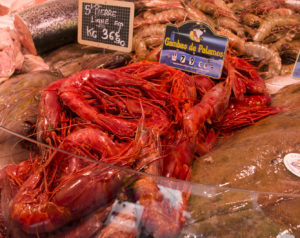 Traditionally, most of the French grow the vegetables they use for everyday food in their own gardens, apart from the people from the bigger cities. They call those gardens potager. The vegetables that the French mostly use are chives, endive, nettle, and leek, but also zucchini, potato, carrot, blue eggplant, locally grown mushrooms, asparagus and artichoke which are frequently on the menu, which can be seen on the market stands.

The most famous French salads are: Nicoise, Mesclun, and even more famous mashed potato Ratatouille. 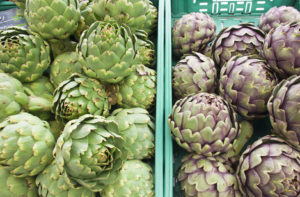 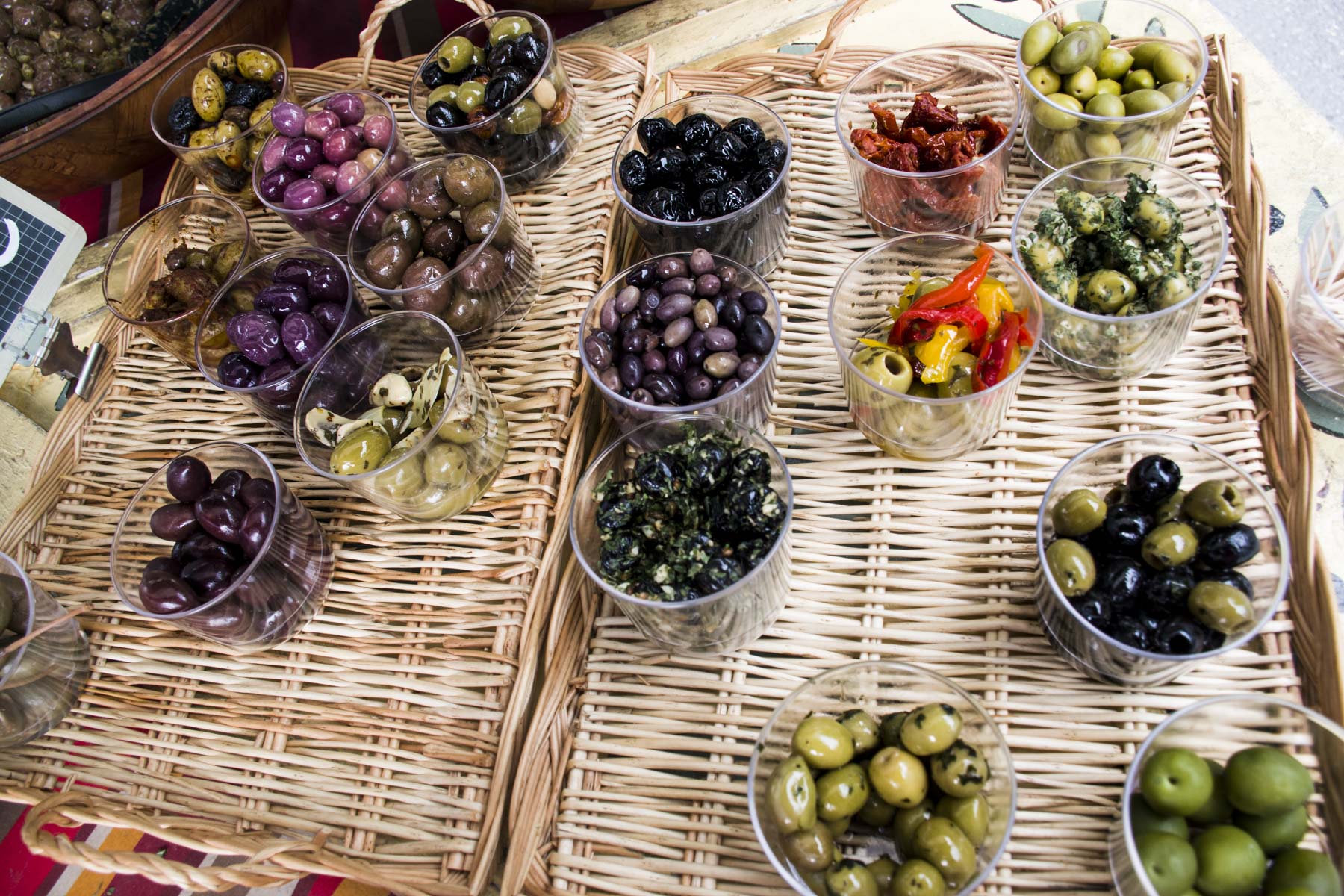 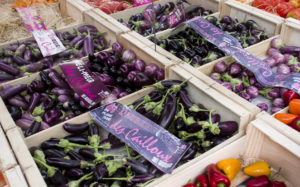 A fruity trip to France

As for fruit, they mostly eat tomato

Figs are, for me, best when combined with goat cheese, a real delicacy

Now, let’s get to a little warm-up before we toss on the tasting of everything we’ve found at the market

These were my favorites, where I bought lots of it: 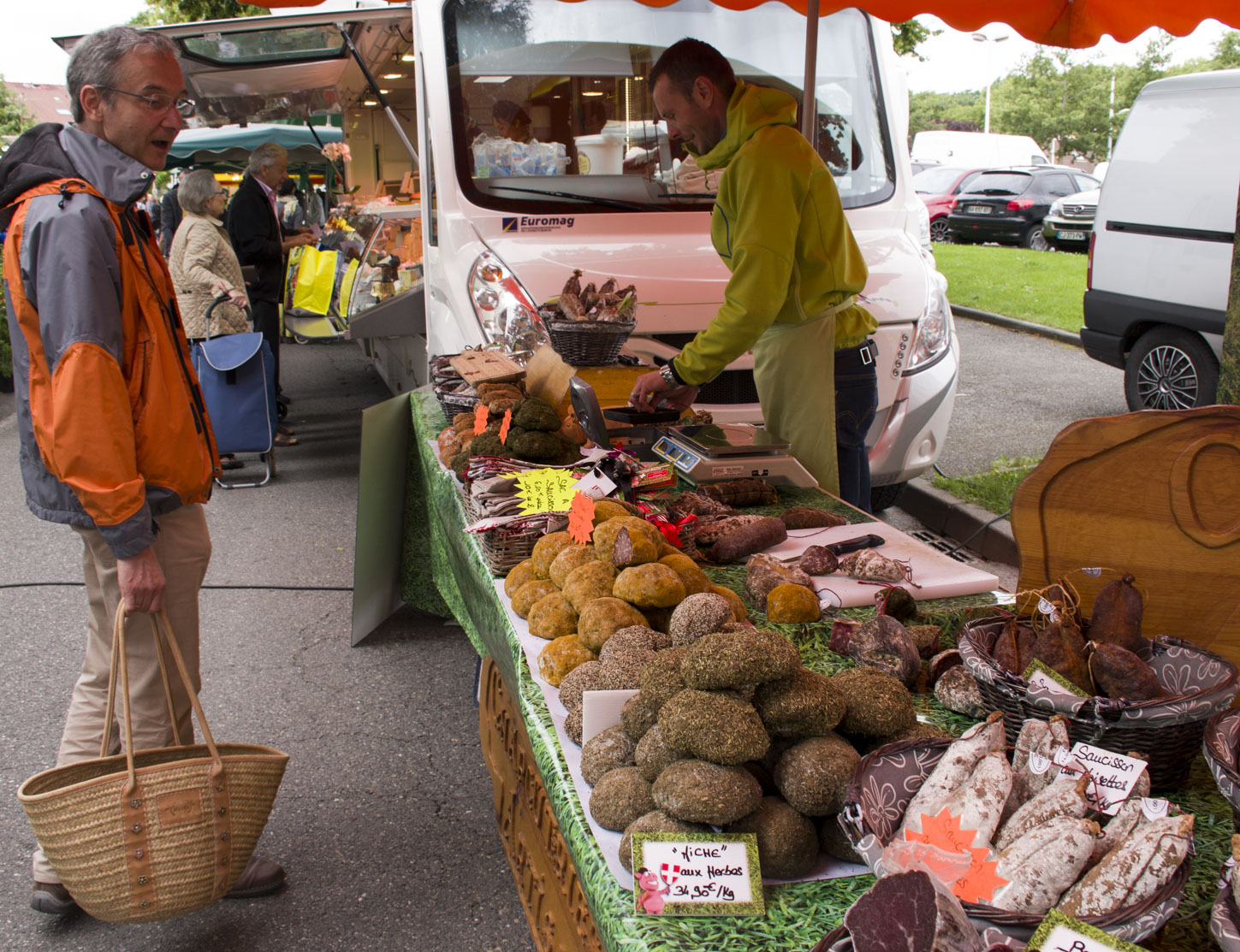 Where there’s so much raw food, surely you can meet a Master Chef on his assignment

This trip to France enabled me to meet a few.

The first Master Chef and his grilled chicken 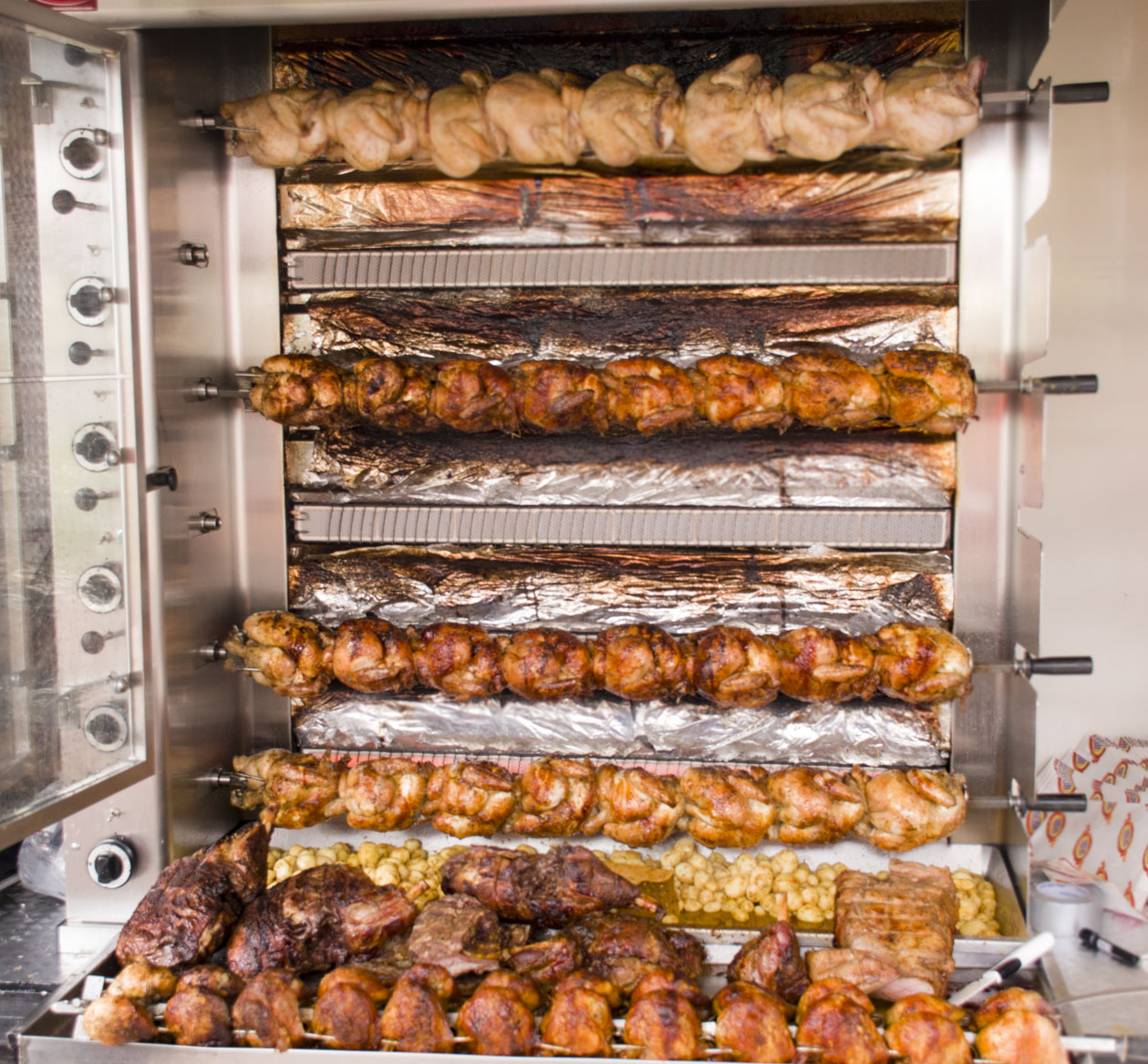 He was cooking something similar to the beef stew. If we grade the cooking proficiency, based on the queue behind each of these tables, it was a B+ 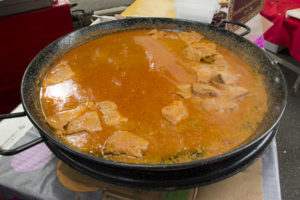 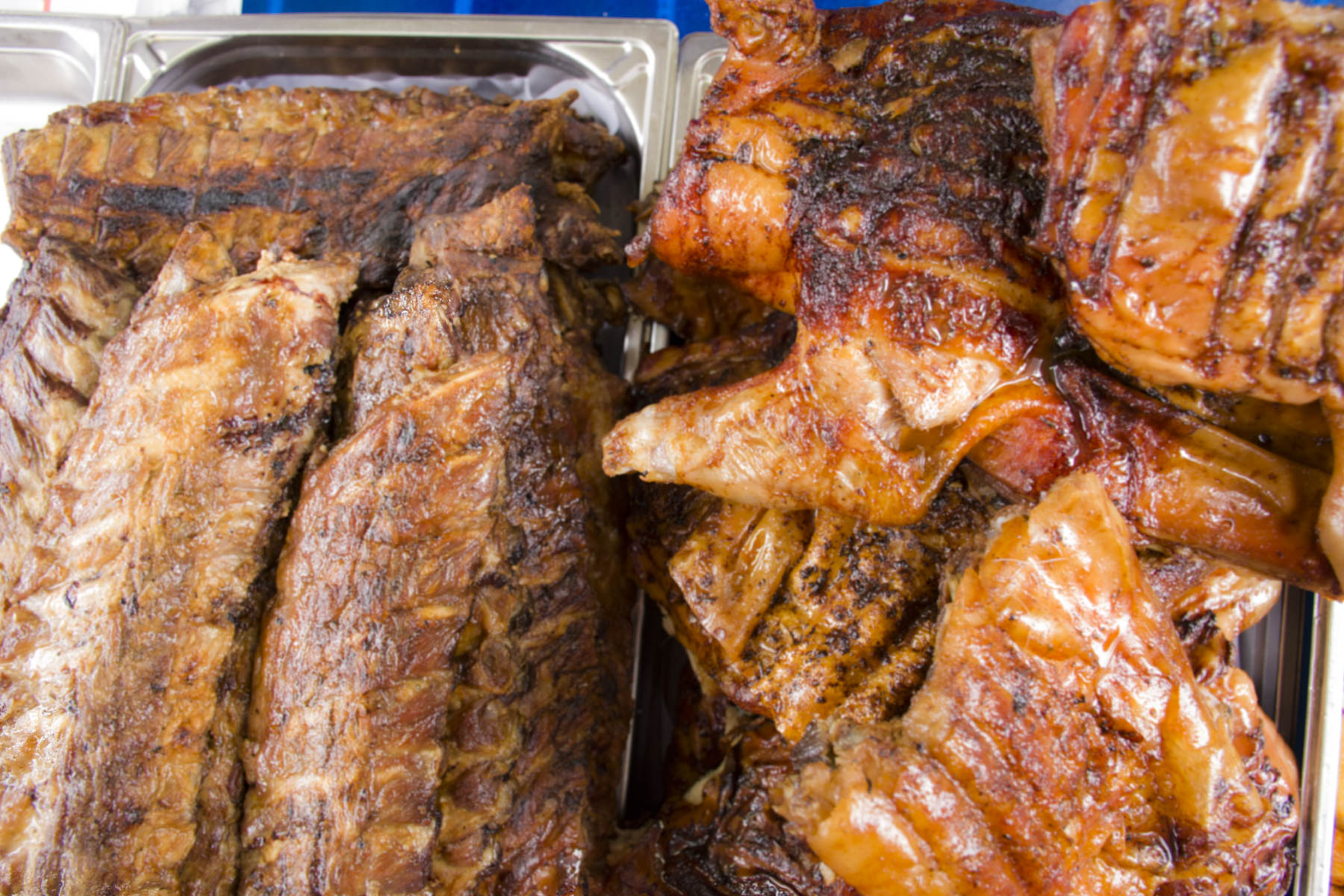 Master Chef 4 and the French version of paella 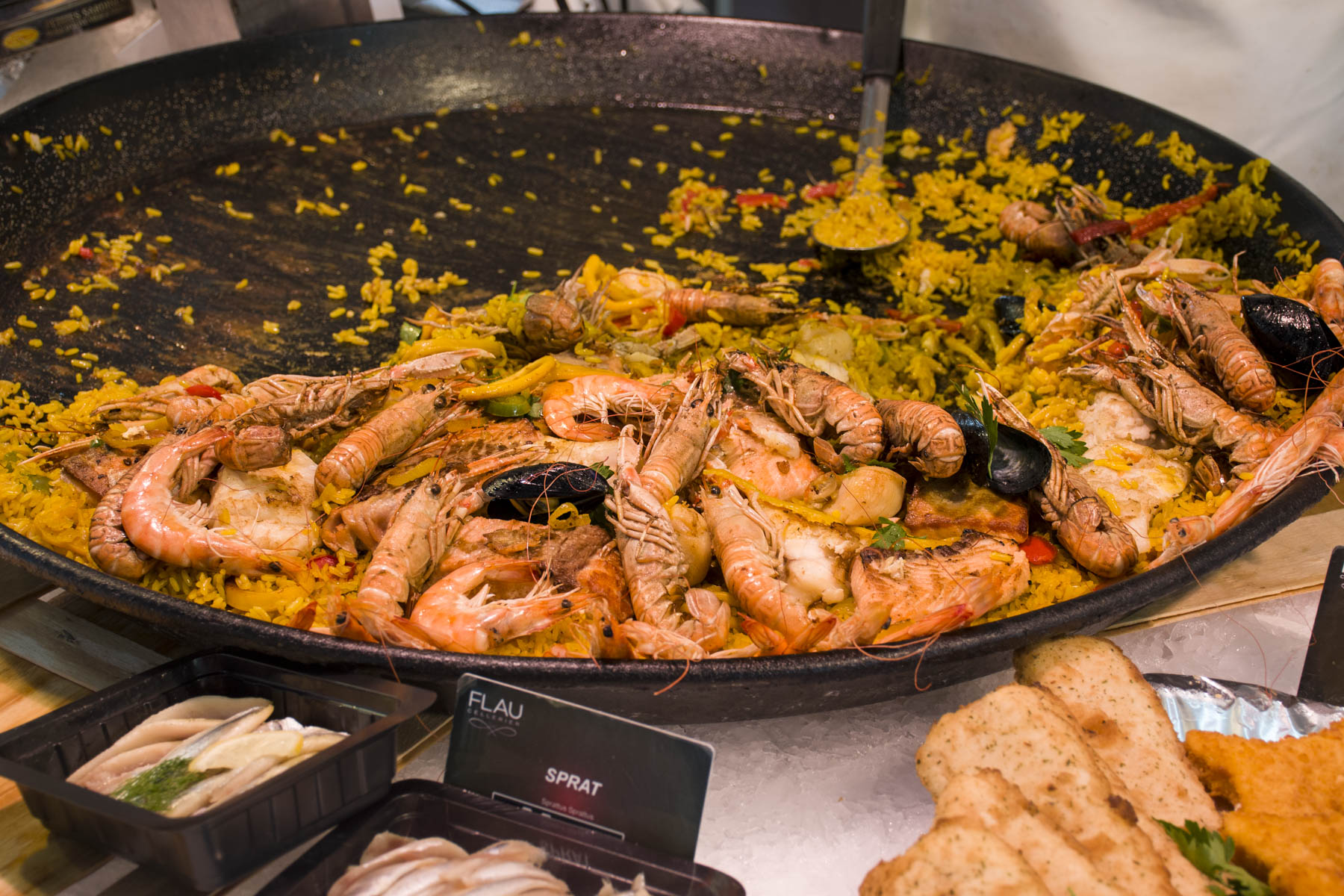 And now, in order to complete all of this, all we need is bread for dipping at the end

A crisp roast crust, I’ve always wondered what why it was so hard to make, since bakeries in our country cannot achieve it

So, I haven’t yet found anything similar to this in Belgrade: 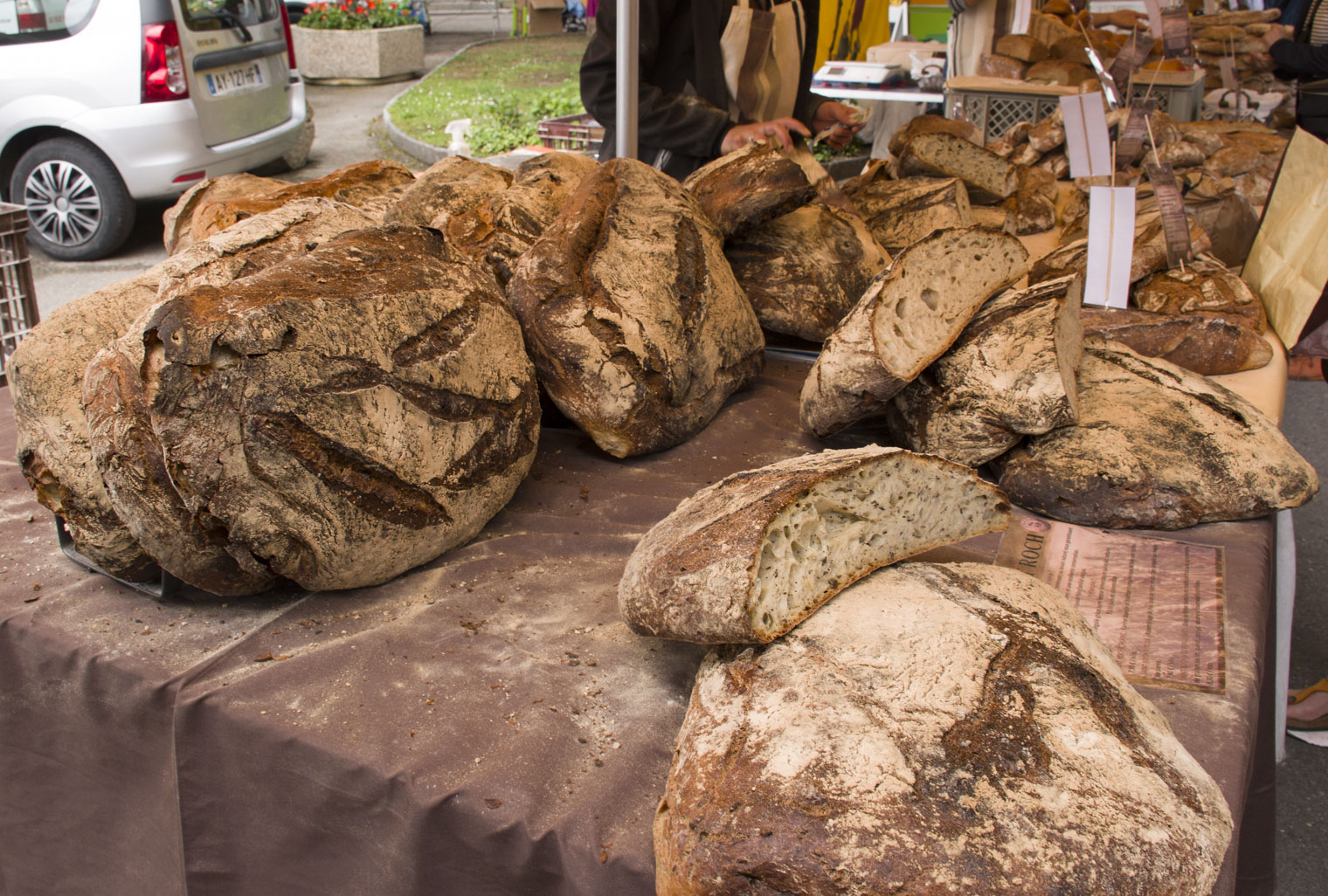 At the end, these dishes may not fall into the top 10 French dishes, but, nevertheless, it was nice to see all those people from different meridians gathered there for one common reason, and that was fresh, healthy and various food.

Bring only as much money as you’re ready to spend, and not overdo it, to the market. Trust me, your eyes will get very big once you see everything there’s to see.

A French chanson in the spirit of the Ferney Voltaire market