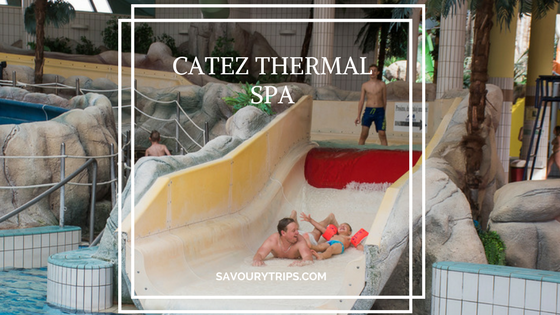 Catez Thermal Spa Slovenia what can you expect there?

I’ve only known about Catez Thermal Spa Slovenia from the stories told by a great number of my friends who’d been there. I’ve become so familiar with them that at some point I convinced myself one of those stories was mine as well.

However, in reality, it’s not exactly like that. Yes, I have passed by the place a million times, gazing in the direction of Catez Thermal Spas with a sight that meant ‘I have to go there’.

This April, I decided that it was time for Slovene Spas, including the Catez Thermal Spa Slovenia ones.

It is set in Slovenia, near the Croatian border.

There was a beautiful entrance and beautiful parks with a path. It looked promising at the very entrance.

Catez hotel, so that you can spend the night at the very place.

Catez hotel, so that you can spend the night at the very place.

There is a restaurant or two, and a lot of shops…it seems fun.

At the main gate was set also the entrance for the summer Thermal Riviera.
Well, one should certainly make sure to make some profit both during the summer and the winter season.

So, Catez Thermal Spa Slovenia consists of two separated Thermal Rivieras, the summer, and the winter one.
I had to sneak a peak in both of them in order to be able to tell you about them.

I saw a huge slide..in the summer Thermal Spa Riviera

I wasn’t impressed by the entrance hall as if something was missing there… it was kind of messy and disorganized… a huge number of lockers to leave your clothes in. There are a lot of showers there, so you don’t need to worry about that. You can spend a couple of hours there, take a shower, dry your hair and continue your trip towards the western part of the continent.

I couldn’t wait to take my clothes off, expecting to be amused although I am not exactly the pool fan.

Unfortunately, I was disappointed upon my first dip into the pool. My expectations, based on the stories told by dozens of my friends who’d been there, were seriously shaken.

Ok, I didn’t like it, but a great number of parents with small children did like it, because, well, that’s exactly who the entire place is made for. Even better guests would be grandmas and grandpas with young children.

That is when Catez Thermal Spa Slovenia would be worth every cent.

There are a lot of pools, and different kinds of amusement to occupy kids up to 12-13 years of age 🙂

However, unless you are adults who enjoy trotting, or you’re classified as seniors who don’t really like rapids, there’s not much that would be interesting for you.
Three hours, most of which I spent taking my clothes off and putting it back on, and during which I soaked my head maybe twice, looked more like dabbling my feet in the water than actually swimming.

There were some small hot tubs as well, but the line was huge even during that winter season. I can only imagine what that would look like during summer.

Finally, what I could conclude was that this place was an ideal location for seniors with their grandchildren, or if you’re already residing in the neighbourhood it’s certainly better to send your kids to the pool than let them bore around the house.

How much does that pleasure cost?

In case you’re planning to go there during the work week for a one-day outing, then it’s cheaper. Both during the winter and summer season, it costs 13 euros. Kids of age up to 14 pay a lower price: 10 and 9.5 euros.
If you go there for the weekend or a holiday, then the price would be 17 euros for adults, and 12.5 for kids, no matter what the season is.

There are discounts only for packages, meaning 20 to 50 entrance fees for the whole day, or if you get there after 6 pm.
There’s Sauna park apart from these swimming pools.
Not even the hotel guests get the access to Sauna park free of charge.

What’s the original that they boast about? 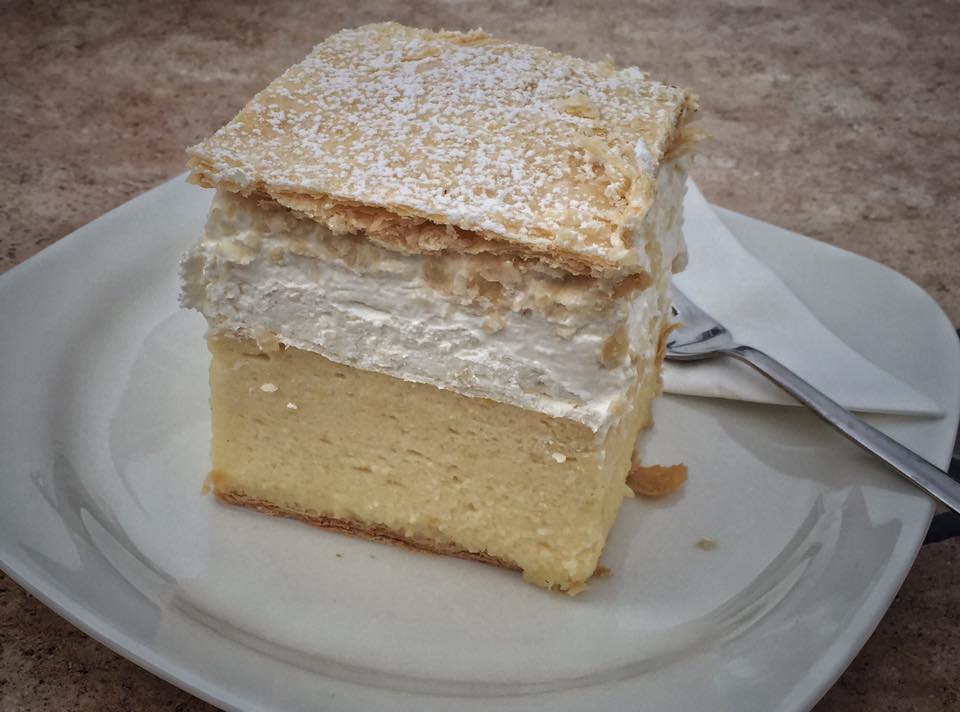 Did you know that the original cream pie recipe comes from this are, or more precisely, from Brezice. Brezice is the small place just a couple of kilometres away?

I had to try the original so that I could let you know if the copies are really just that.
However, I wasn’t lucky… It was either too cold, or the twist wasn’t good, or they might’ve been there for too long. I ordered a huge slice which looked perfect to my hungry eyes, but the taste was stale. It wasn’t worth it at all…

Doesn’t it look so attractive? Many would go for this one, and so did I… until something stops me and says: no!

Although it didn’t taste right when I tried it, I would give everything a second chance.

Balkan Cheese Festival Belgrade Slow Food
Ljubljana what to see and how to spend a day?