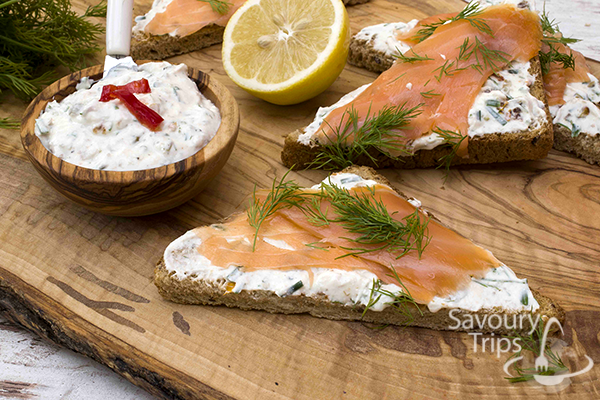 Published on November 24, 2016 | In Contemporary, Scandinavian | By Suzana | 0 Comments

What to eat for breakfast?

A lot of people have trouble deciding between two, or three choices for breakfast, and I sometimes don’t even have the faintest idea, other than oatmeal, fried eggs, ham sandwich or cornflakes which, by the way, I have completely thrown out of my diet.

So, not being able to come up with anything, I think, and think… what could I eat…

It is said proteins are the best food. And so, I think of salmon with cheese, and not just any, but my favorite goat cheese… but in a very extraordinary combination of ingredients.

Are you pro or against salmon?

There are different theories… healthy or unhealthy proteins… Depending on who you consult with, the reply might vary…

According to them, salmon as a ‘choice of healthy food’ is nothing but an angler’s tale… (based on the joke about an angler and his fish with a huge eye). Namely, if compared to the red meat, it is healthier, but basically salmon is fish with fat which can cause obesity and diabetes type 2 (according to a nutritionist John McDougall). He also says that by consuming one gram of salmon after another, we could make cholesterol level in our blood as high as if we ate a hamburger.

It could be even worse, taking into consideration that we eat farm fish, not the wild ones from the Atlantic or the Pacific Ocean. Farm fish contain additional chemicals and pesticides in them, as well as mercury, lead, arsenic…

It is very common for fishermen to feed them ‘red’ food (products with food color) in order to bring back the pink flesh color to salmon and sell them as wild salmon, that have significantly higher price.

Food they usually feed them is soya and corn, so farmed salmon have less Omega 3 fat acids than the wild ones, and they also have an increased amount of Omega 6. Everything opposite to what we need.

There is also that constant argument called the disorder in the food chain in nature. More salmon for people, less for other predators in seas and oceans.

At salmon farms, sea lice can appear. Farmers fight them with pesticides and various other toxic substances, hence the increased level of those elements in their flesh.

This is all according to the conspiracy theories against salmon, but where there’s smoke, there’s fire.

By consuming salmon, one decreases the risk of depression, which is a frequent problem nowadays Cheese salmon. It affects the improvement in our cardio vascular system. It can protect us from various problems, such as heart attack, arrhythmia, high blood pressure…

It is rich in selenium, which helps thyroid work like a Swiss watch, and it strengthens our immune system as well.

It contains a lot of vitamin D, proteins and vitamin B.

It is good for pregnant women, since it helps in the development of baby’s brain, etc.

After all, these are salmon fans 🙂 .

In case you didn’t know

1.       Salmon belongs to the trout family (remember the salmon trout)

4.       Salmon doesn’t eat any food when they swim upstream for mating.

5.       They are great travelers (that is why there’s spotlight on them on my blog), so a Chinook salmon has swum more than 3, 800 kilometers to its mating spot.

8.       And this story doesn’t have a happy end after all… because a lot of salmon will die due to exhaustion after mating, just a smaller number of them would do it more than once in their lifetime.

This variation is with the smoked salmon, hence I will consider that vegan analysis doesn’t refer to it. It will be easier to enjoy the flavor of our smoked cheese salmon. On the other hand, if that salmon doesn’t kill me, nothing will 🙂 . Goat cheese, you can find it in stores now. My variation is to make it on my own from German cheese or any other plain crème cheese and goat cheese… mix them in the proportion you like and that is all. The most important is that you like the flavor of it. This cheese salmon can be used for canapé and served when you have dear guest, for some special occasions, Slava, or New Year which is approaching.

If you like smoked salmon, my recommendation is to try salmon tartar as well.

I am all for changes, be they only little ones… You don’t always have to begin them with a hairdresser… you can also change your everyday breakfast routine and enjoy the new combination of flavors. P.S There’s no one to take a picture of me (luckily) but I’m stuffing myself with these sandwiches.