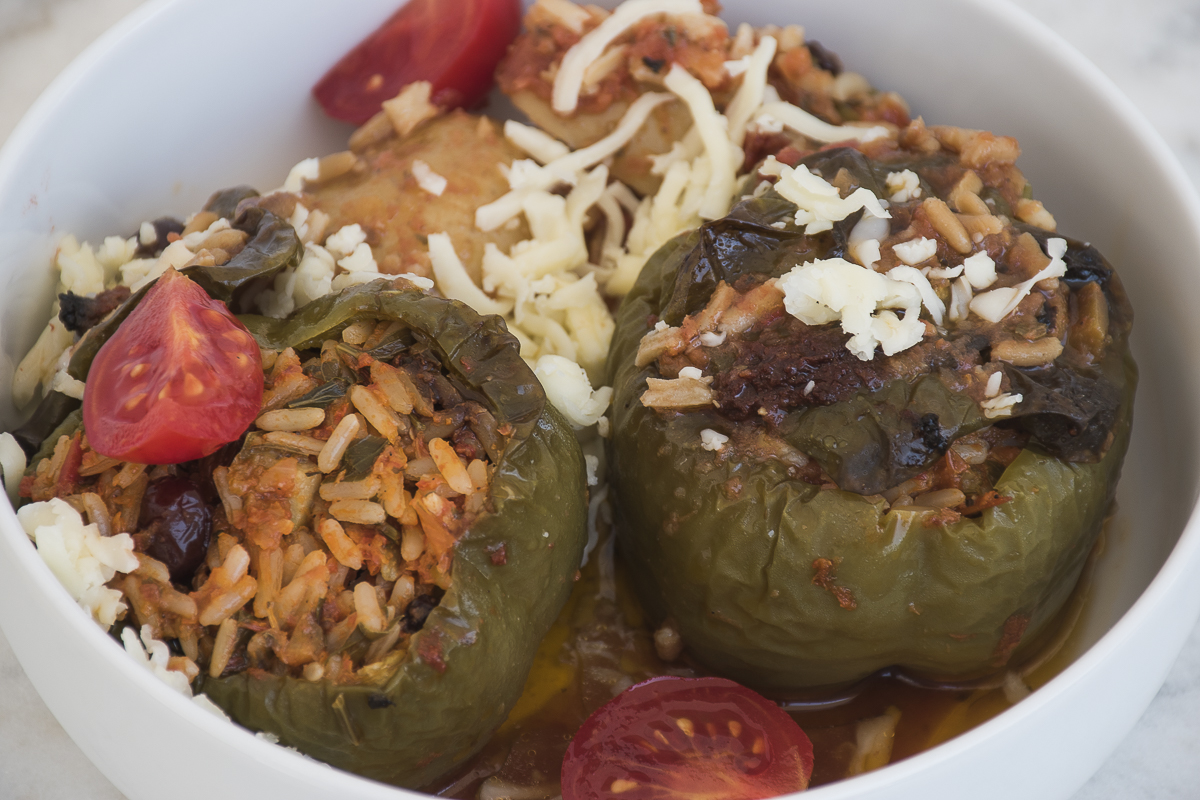 The entire Balkan has the same type of recipe for stuffed tomato and stuffed pepper with or without meat … The base is the same … you need peppers and tomatoes and most likely rice.

Of course, it would be better to get pepper and tomato from a local market.

I tasted this recipe this summer on Lefkada, as a traditional Greek meal.

It was made for us by a local lady Eleni who is also the owner of the villa where we spent our 4th summer vacation. See here. 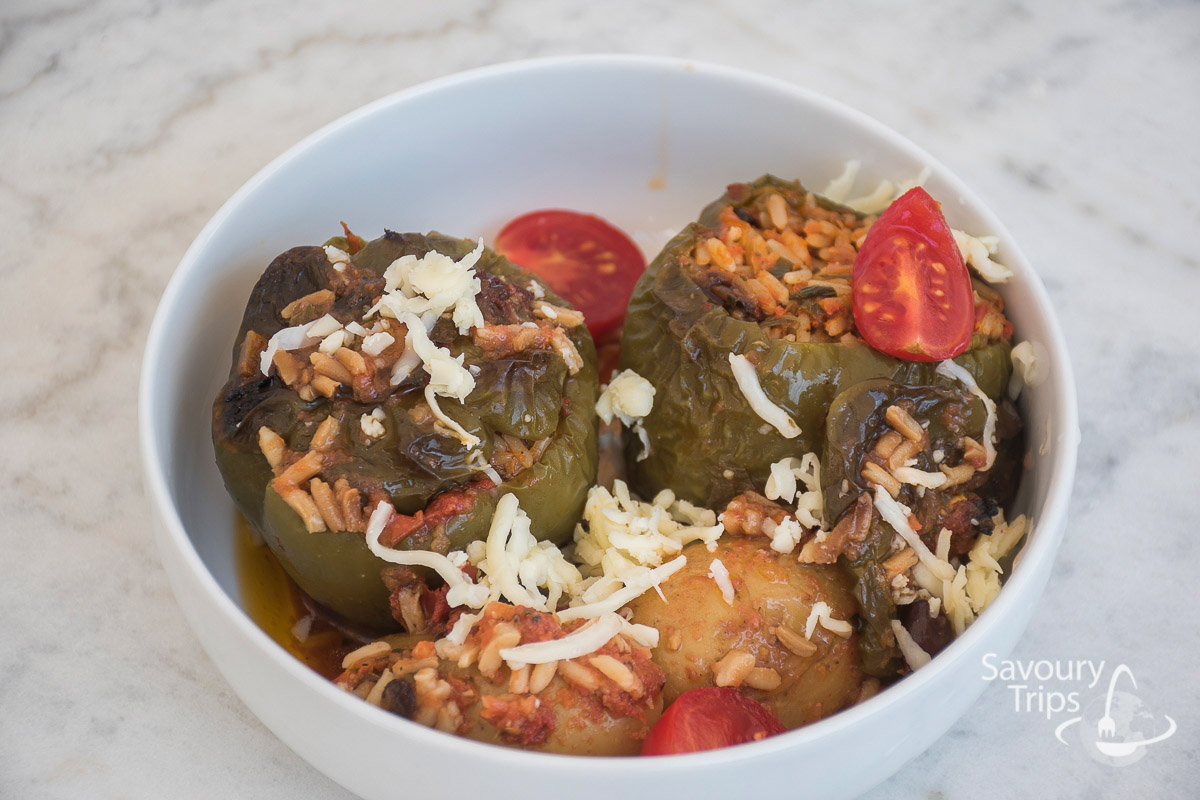 It’s interesting that for this meal, it’s better if both tomatoes and peppers are prepared in the same pot. Of course, the tomato flesh is used for filling peppers, and if you don’t do it that way, the balance of taste will be lost for sure. And when you lose the balance, the taste of tradition is not the same.

Secrets for perfect taste of stuffed peppers and stuffed tomatoes

Discovering the secrets of their good taste, I came across many surprises 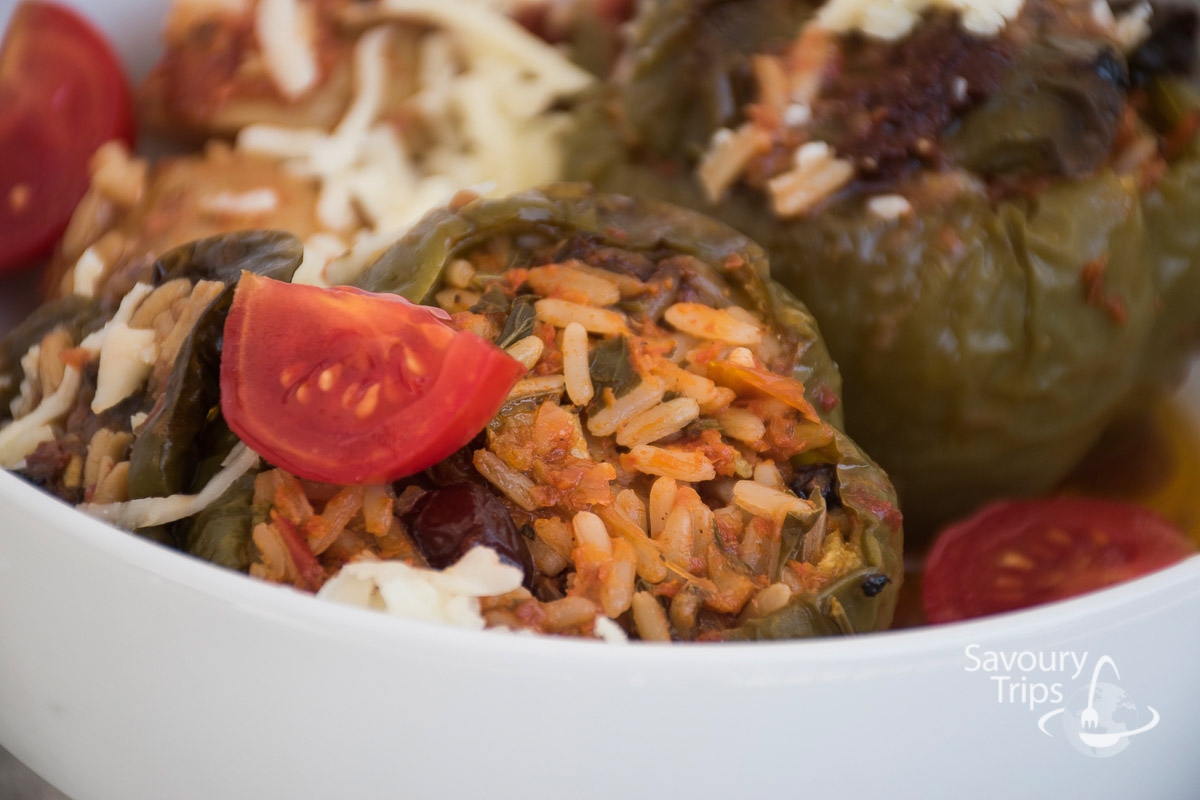 It is much better to find dark green peppers, especially homemade than those brighter due to their intensity of taste. Also, always select smaller peppers and smaller tomatoes, as they are more juicy and better in quality than those larger ones.

It is optional to add some zucchini and egg plants…as we did it.

The recipe is a little bit demanding, but not because of the cooking technique, but because it has lots of short procedures that have to be followed, starting with washing, cleaning, and cutting vegetables which take about 60 minutes.

Preparation of peppers and tomatoes

The first thing that you have to do is to put tomatoes and peppers on your baking pot to see if they fit but you have to leave some, even small, gaps between, so that the potatoes can fit too and then you can decide how much stuff they will eventually get into your pot.

Wash the tomatoes and peppers you use and cut the stem at the root of the peppers. Using a fork, make 2-3 holes at the bottom of the peppers and tomatoes, so that they can absorb the juices during the cooking. 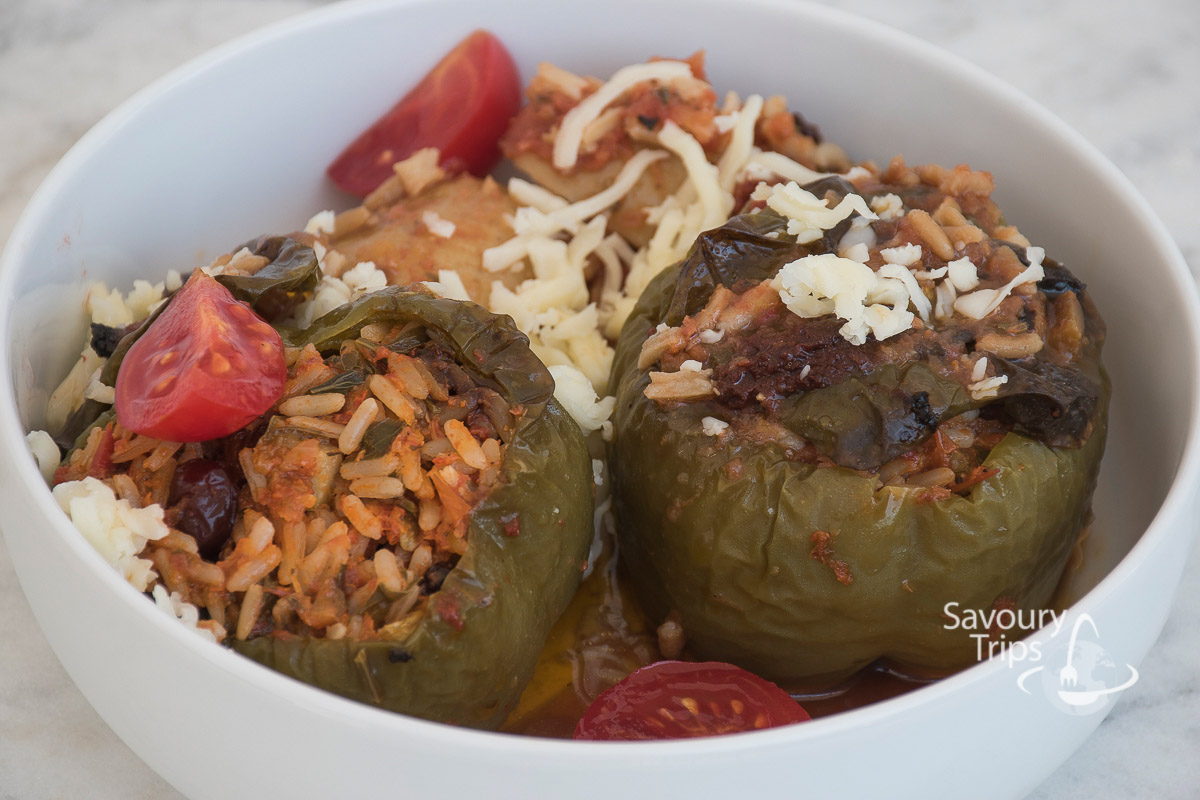 Cheese also pass to the grater, don’t forget to wash and cut potato in the size of 3 cm.

Now it is peppers’ turn. We have already cut the stem at the root of the peppers, now we have to cut out the lid with a knife and rub and discard the seeds. The fleshy white-green interior beneath the lid and the white “nerve” that is left in the body of the pepper inside cut into small pieces as much as you can.

Continue with tomato, the same thing make a rub,  then with a spoon remove the flesh, aiming to leave relatively thin walls on the tomatoes to have enough space for the filling.  The tomato flesh has to be cut also into small pieces.

Organize all of them in bowls (herbs, tomatoes, and pepper’s flesh, add black raisin) and have them ready for use when it is needed.

In a deep pan add some oil at the low heat, sprinkle the onion, stir the sugar well (or honey as a substitute) and when it starts being fried for a minute, add the pine nut.

Allow cooking for a total of 3-4 minutes stirring frequently. In this moment you can add eggplants cut on the cube size or zucchinis, but it is optional.

Add rice and cook for 1-minute stirring.
Then add all bowl content (tomato and pepper flesh, pepper, and raisin sauce) and stir.

As soon as the juice starts to boil, add salt and pepper, dry mint and of course again stir.

As you will see in 4-5 minutes, the juice is reduced and the rice absorbs it, turn off the fire and after moving the pan to a point where it no longer gets heat, pour the grated cheese as the last material. Stir well and your fill is ready. 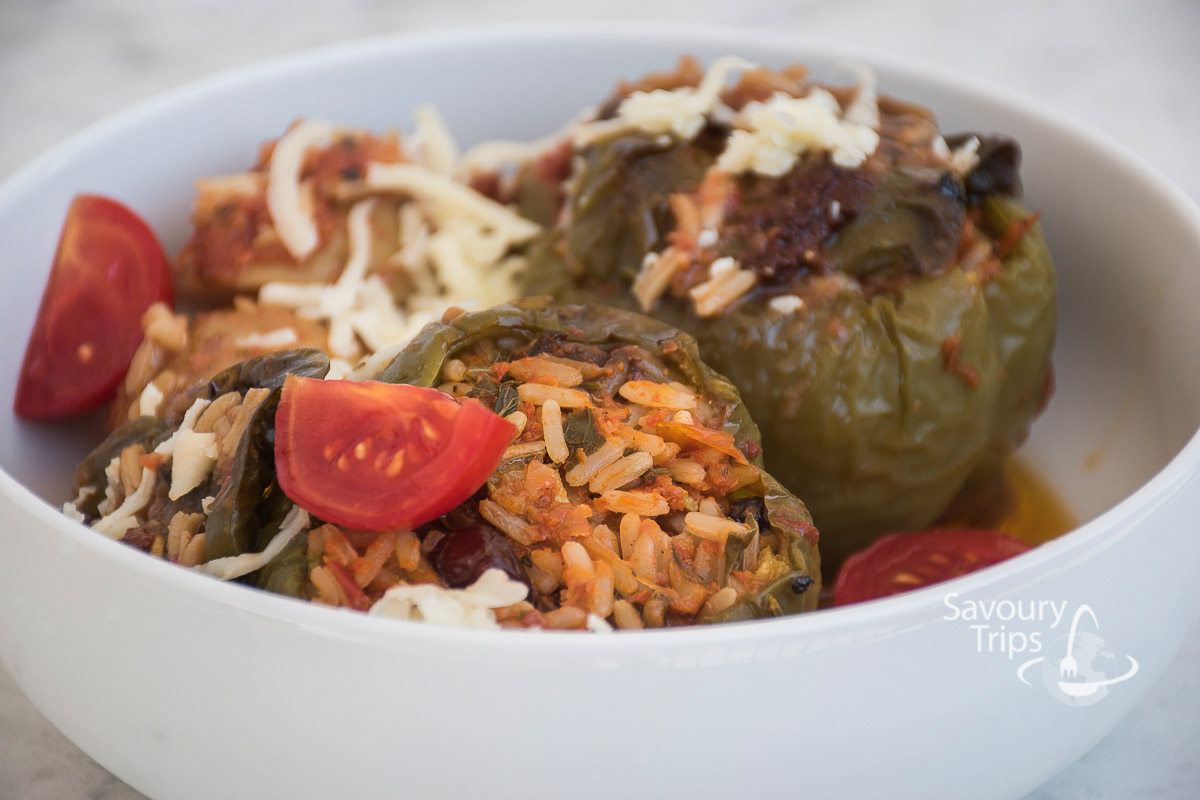 Fill the tomatoes and peppers

With a spoon fill each tomato and pepper with the filling without pressing the contents and leaving a little margin to the edge of the vegetable so when the rice is expanded after cooking, it will not overflow. If you leave a little bit of rice, pour in between tomato and pepper (the sauce is delicious).

Put the lids on top of them, add a little tomato paste, bread crumb, and a little bit of cheese.

Put two tomato juices between tomatoes and peppers, the rest of the tomato paste and 50 ml of water, a little salt, and pepper.
Finally, slowly pour the oil, both between the stuffed and on the lids.

Your Recipe stuffed tomato stuffed pepper is ready for the oven. 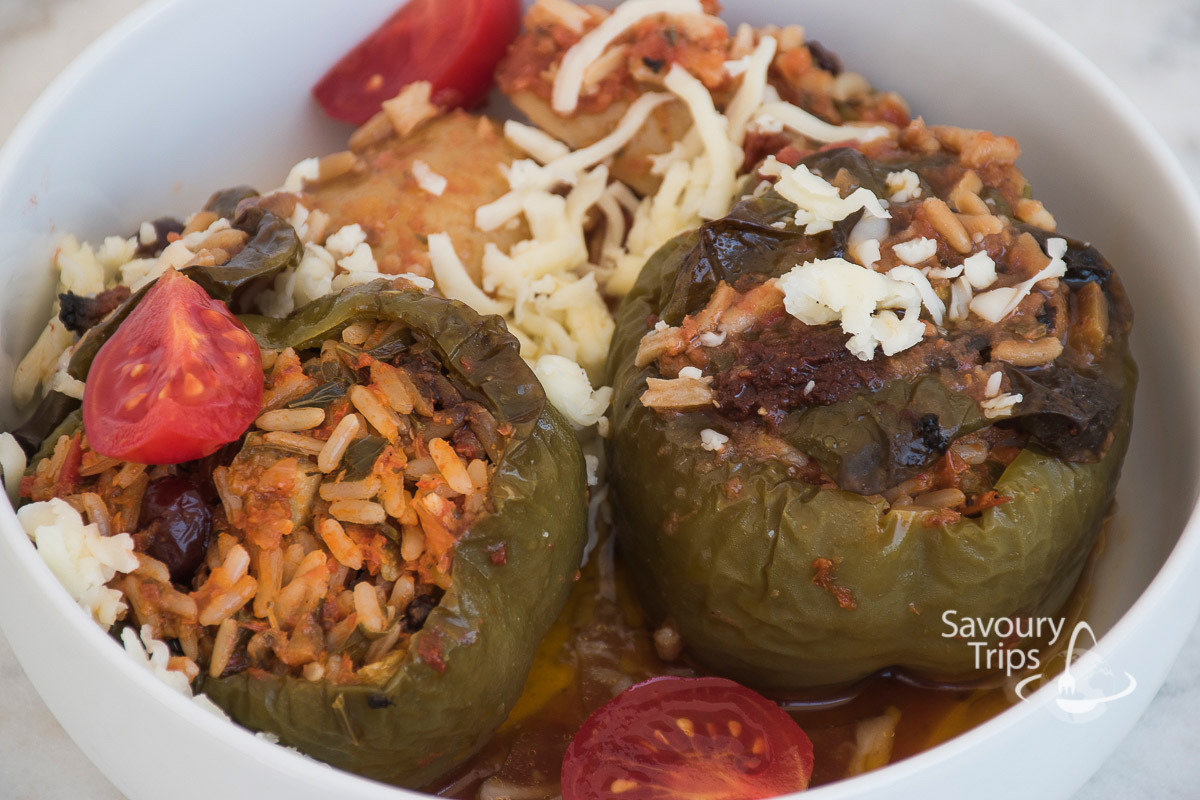 You have to bake them for 2 hours.

Take them out of the oven, and leave them for at least 1 hour before serving them. Stuffed foods are delicious if they stay for 24 hours.   Serve at room temperature. Accompany them with feta, which goes well with the greens of the Greek cuisine.

Serve at room temperature with Greek feta cheese, to get a full taste of Greek cuisine.

I used this information for the preparation of this recipe.