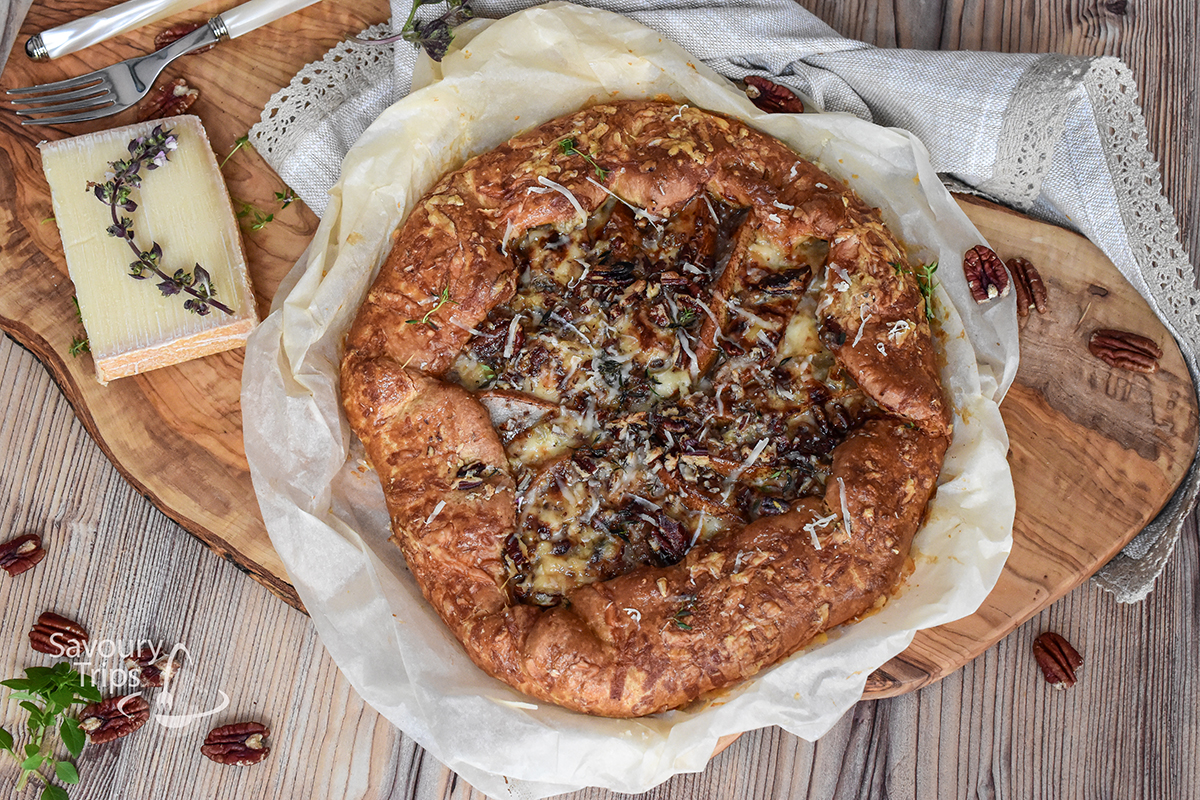 How to make homemade cheese pie with onion and a modern twist?

Homemade cheese pie with onion is made by my love for different flavours and baking styles. Under the impression of my trip to France on one hand and the love for Italian cuisine on the other, I created this treat called homemade cheese pie but with a modern twist.

Treat is the right word for this cheese pie even though there is nothing sweet in it. 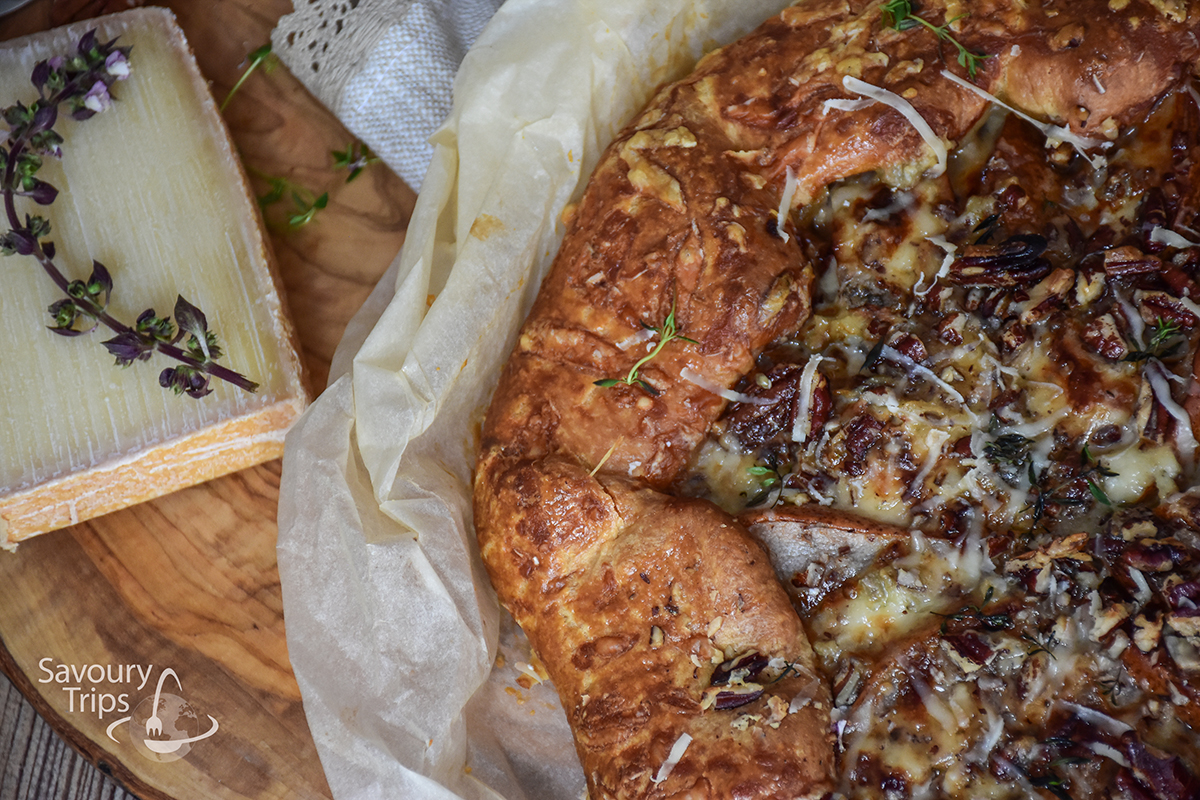 Fancy homemade cheese pie with onion and how to make it?

I kneaded the crust for which you need flour, salt, baking soda, butter, orange juice, Greek yogurt, and water.

Just like in my famous combination cheese tart from the other day, I mixed together flour, salt, baking soda and put cold butter in the mixture cut into cubes and kneaded using my fingers 🙂

When the flour and butter partially mixed together, in other words, there weren’t big chunks of butter, I added Greek yogurt and orange juice and left the kneading to the mixer. I added water when needed – teaspoon by teaspoon.

Tips: Dough has to be wet and a ball needs to be formed during the mixing. It should not be sticky. 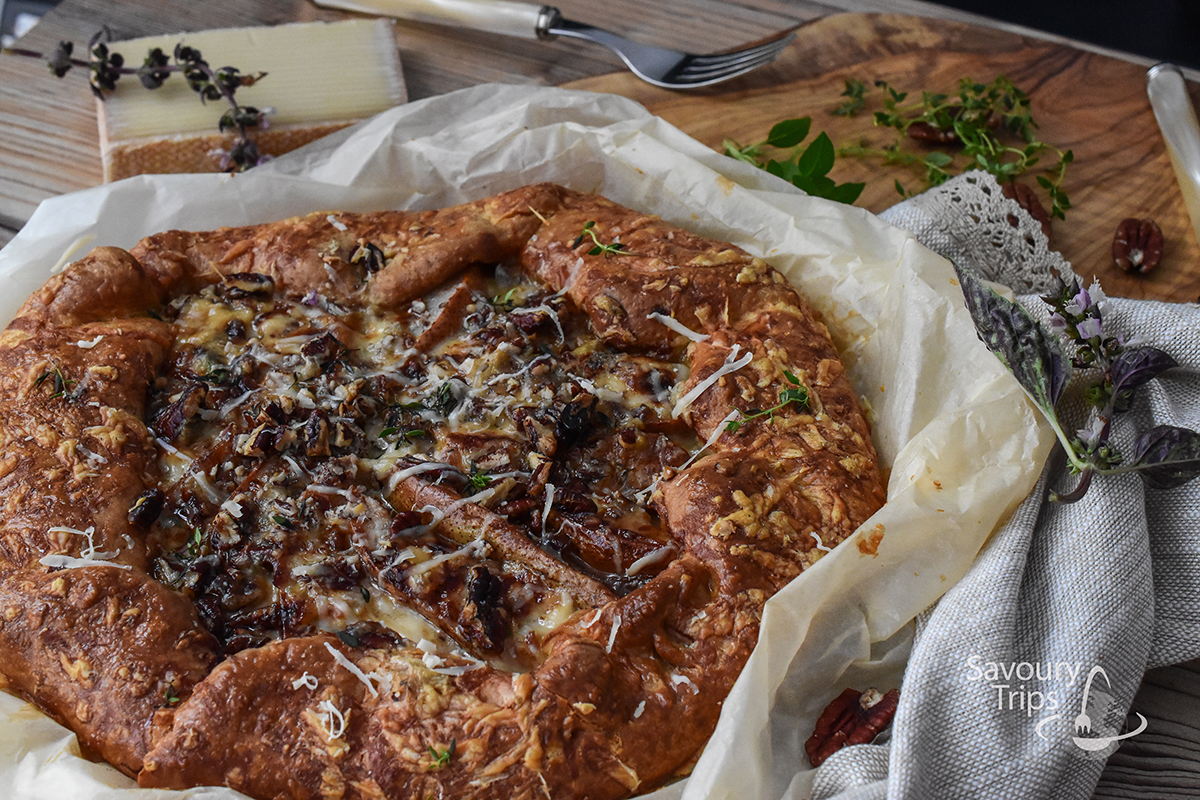 When I formed the ball, I covered the dough with a transparent foil and put it in the fridge to rest from my and mixer’s kneading.

Cheese pie is not just made out of cheese but onions as well, caramelized ones. I cut the onion into thin but large rings, that is half moon shapes. I melted the butter in the pan, added the onion, salted a bit, peppered and cooked for 50 minutes on medium heat with occasional stirring.

At the end, when it already had its caramelized colour, I added a glass of dry red wine of good quality which is very important. Always pour wine into a dish, which you would otherwise happily drink from a glass. 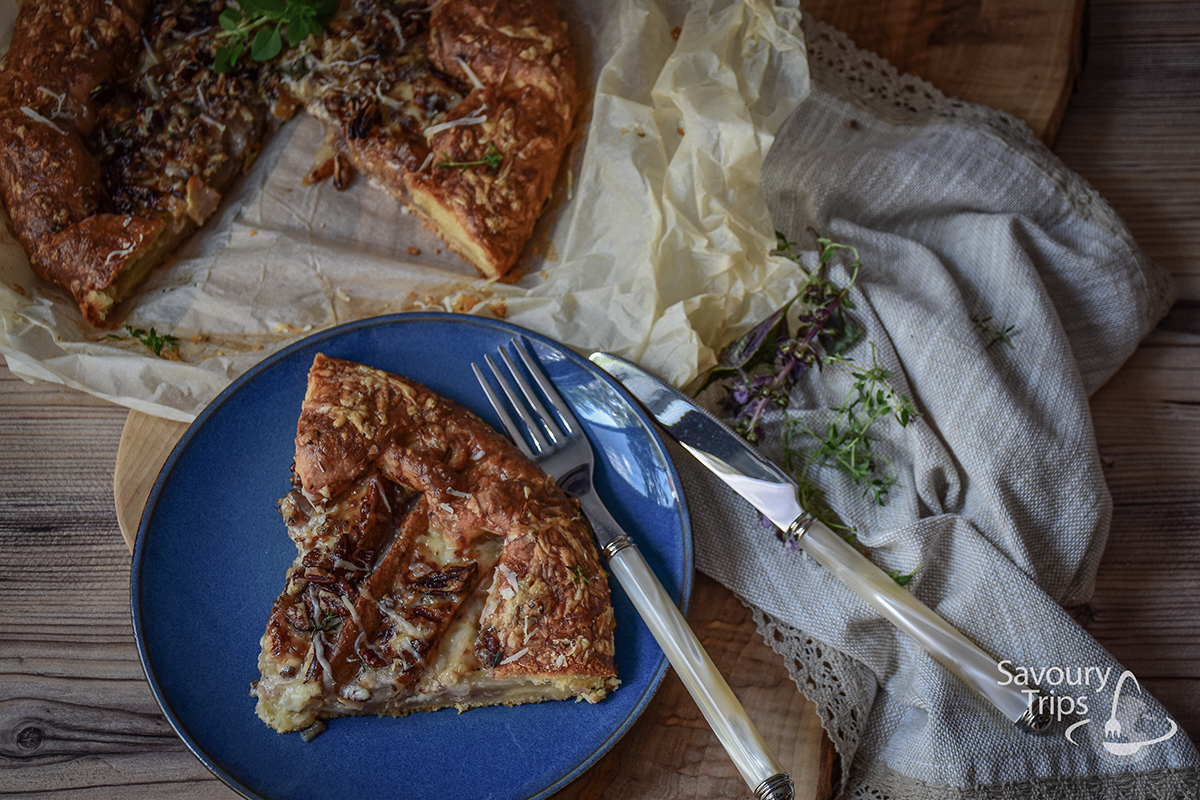 I simmered the onion for about 7 minutes more until the wine evaporated completely.

Homemade cheese pie with onion, the rest of it, but not cheese 🙂

Everything I mentioned above is the main part of the recipe…What’s left to do is to grate Gruyere cheese, wash and cut the pears into thin slices, and add a bit of Cremoso by Galbani gorgonzola cheese 🙂

Let me get this straight…if you don’t have these cheeses or you can’t get them for some reason…Use some other types that you like…For example parmesan, grated gouda or mozzarella…

I cracked the Pecan walnuts through a bag or a cloth and that’s it. 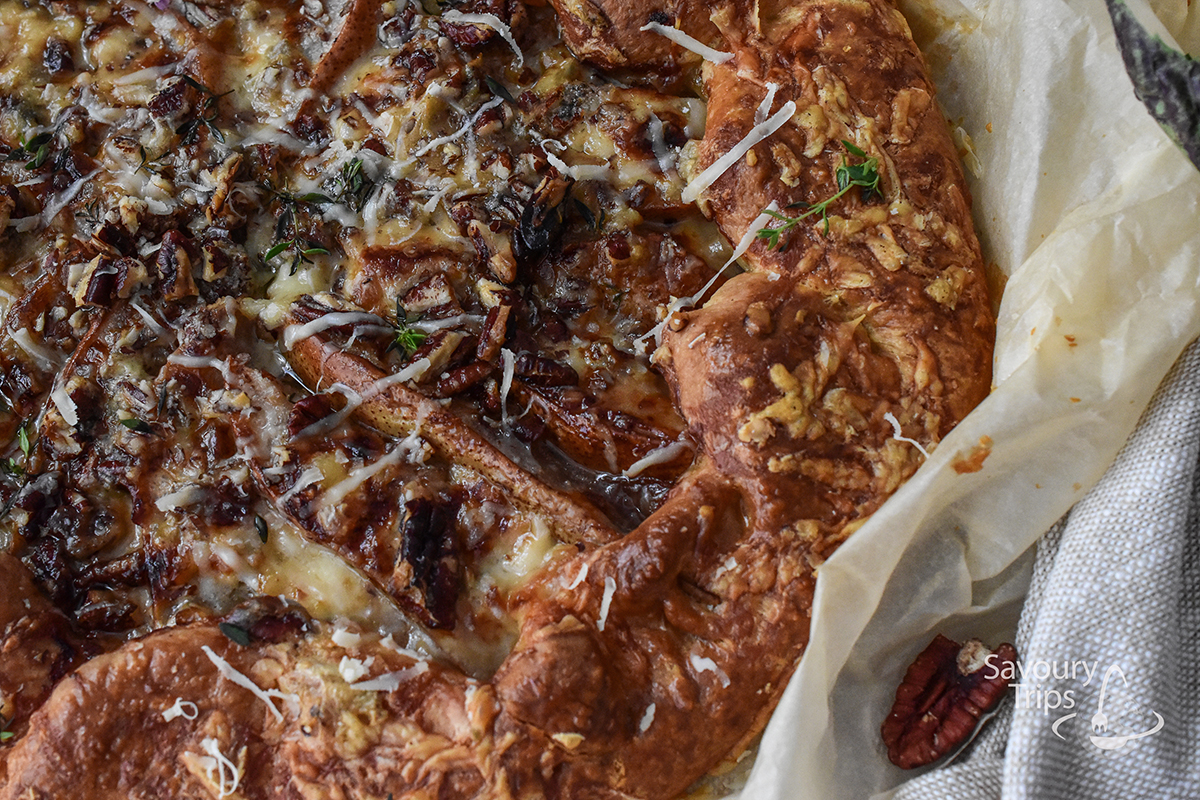 After 2 hours of the dough being in the fridge pass, it should be taken out.

Based on my experience, I make the least mess in the kitchen if I roll the dough out with a rolling pin between two baking papers.

Once I rolled out the dough I started filling its central part.

A layer of grated Gruyere cheese (or some other), a layer of onion, a bit of pepper, then slices of pear, and on the top gorgonzola cremoso Galbani. You can use mozzarella or some other cheese that melts well, and then, like icing on the cake (even though it is not), chopped pecan walnuts. 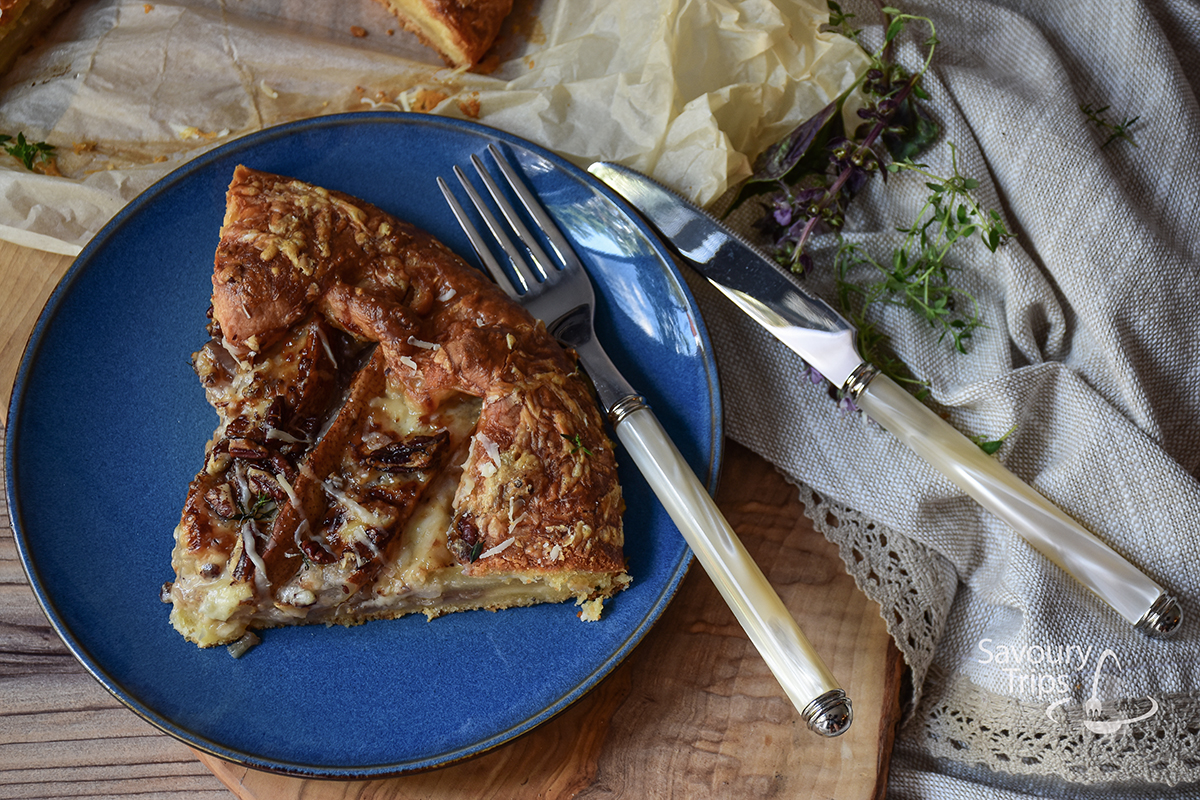 Then I folded the edges of the dough (partially) over the filling (see pictures). Brushed them with an egg and added the additional grated Gruyere cheese.

Then, in the end, I put everything in the oven at 180°C and baked for about 40 minutes. I love overdone and crispy edges…And if you don’t like them like that, adjust the oven your way :).

When the pie was baked and rested a bit from the hot oven, everyone went for it 🙂

Soon there was nothing left. 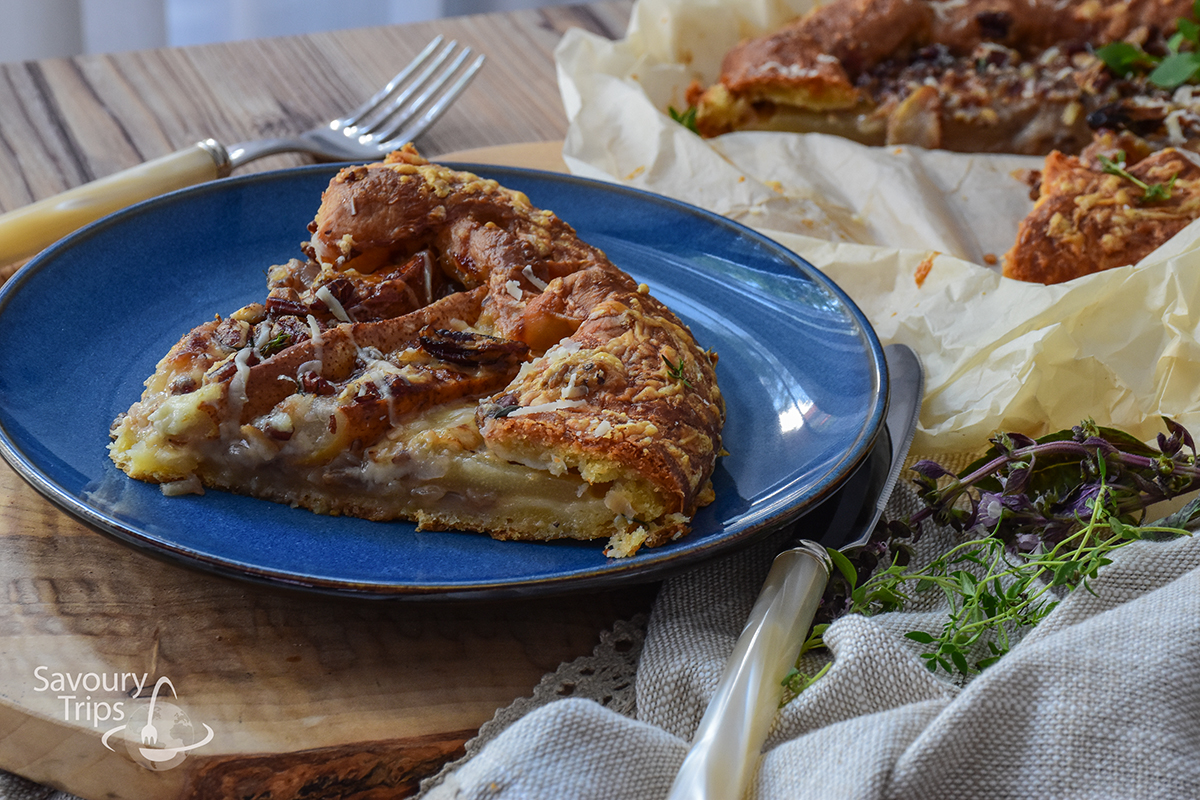