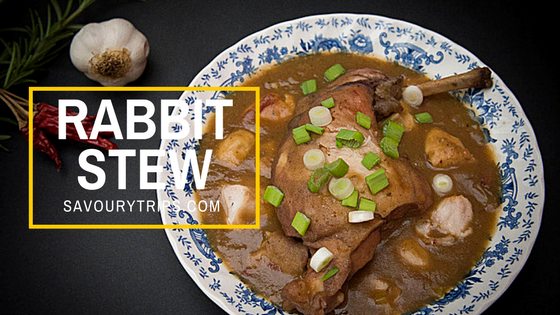 Rabbit stew in my way

I was stunned that I caught it in the supermarket, and I didn’t have to go into the forest.

Who loves rabbit the most?

How come that so many Maltese love eating rabbit?

Maltese cuisine is really Mediterranean cuisine formed by marriage between the islanders (Maltese) and all the civilization that occupied Malta through the history.

So, we don’t know whose child it is but we are sure that it has all the main characteristics of his parents, whoever they are.

Traditionally it is very rustic cuisine and has different dishes according to the seasons. They are using the same spices as all Mediterranean countries: tomato, octopus, fish, onion, garlic, pasta, rabbit, rice, herbs, olive oil, honey. Only the final product is not of the same origin, but still, it differs.  For example, Maltese couscous (kusksu) is not the same as Moroccan, Maltese krustini are not the same as the Italian.

Now, the popular Maltese “fenkata”, from the begging of the text, would usually consist of two courses. Both of them have the same ingredient, rabbit. The first dish would be spaghetti with rabbit stew, and the other one- rabbit meat, cooked in a similar sauce served with peas and fries.

Authentic preparation of this traditional dish, if you are in Malta, you can try here.

So at least they praise so.

Rabbit Stew on my way 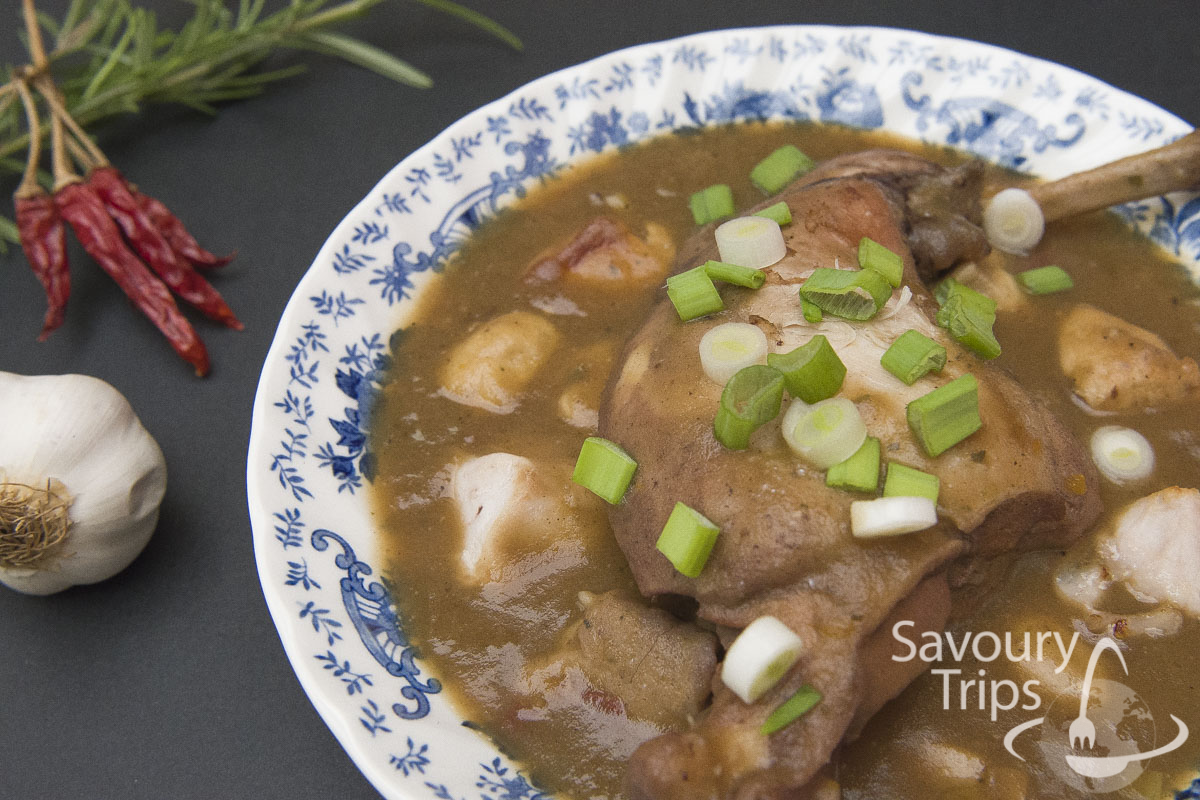 I bought the rabbit in one peace, on my consternation. Why consternation? Because I had to deal with it, portioned it, and I didn’t know how.

Rabbit in one part couldn’t match the pot. What should we do with it even if it matches the pot? We couldn’t all eat together from the same pot and the same part of the rabbit meat.

I was still at the begging and it was already torment.

I have spent a lot of time on Google trying to find some solution on how to cut rabbit meat. At the same time, I sadly looked at it with no solution.

In the end, here is what I made…one video and one post with pictures…which has helped me very much.

(Video is from YT, the internet)

Anyway, I cut a rabbit in the end :). It was not ideal but for the first time more than excellent.

Once you have mastered the rabbit the rest is easy.

Differences between Maltese rabbit stew and my way

Here is a traditional Maltese recipe for rabbit stew

Mix the wine, garlic and bay leaf and make the marinade.Put the pieces of rabbit to chill overnight. Do not throw the marinade, it will be used for cooking.

Everything else from my way is applicable for the traditional recipe.

Prepared everything I need. Tomato, as I wrote, is optional. 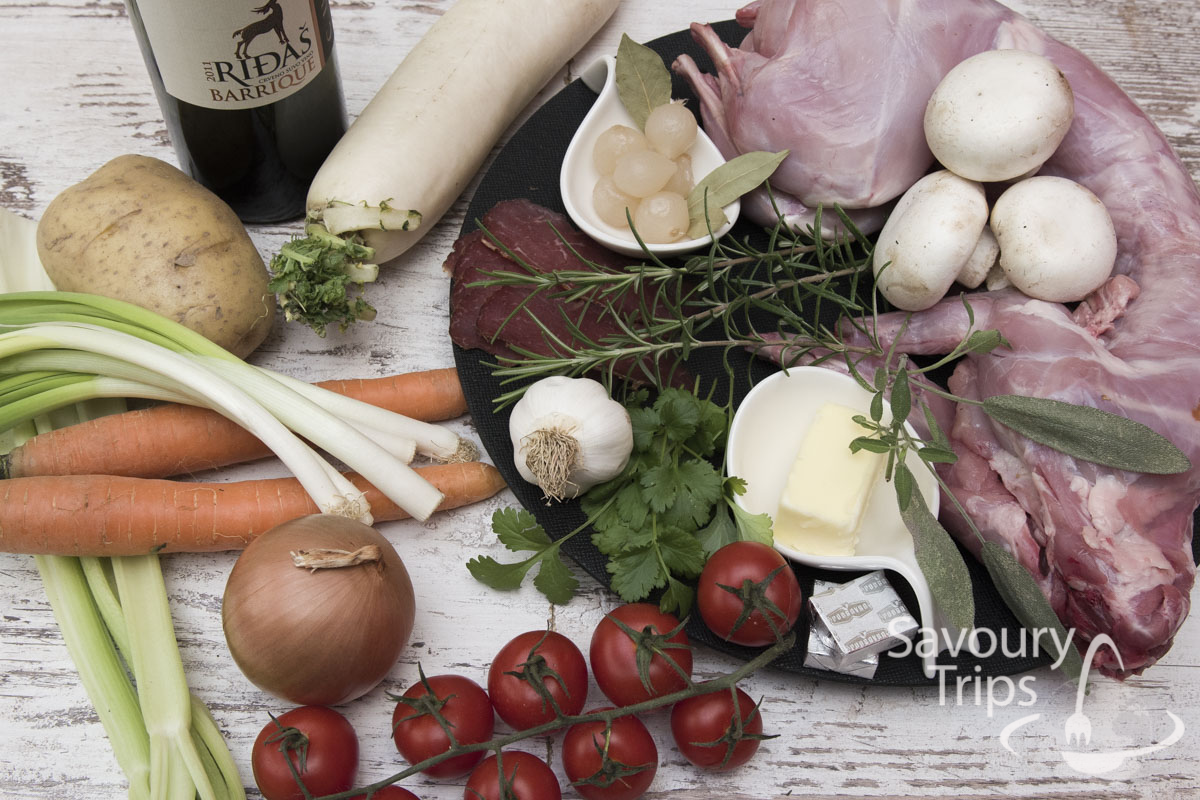 I portioned the meat and put to saucepan only get a little brown on its surface. 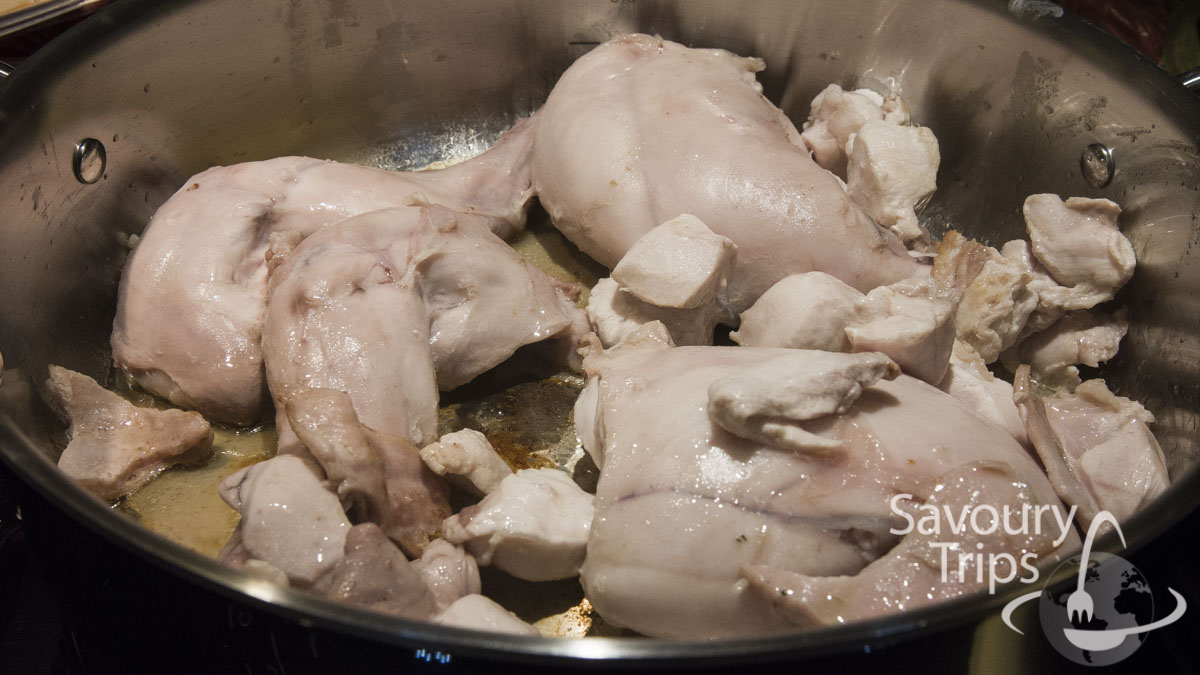 I pulled the rabbit and put chopped vegetables and spices, and cooked. 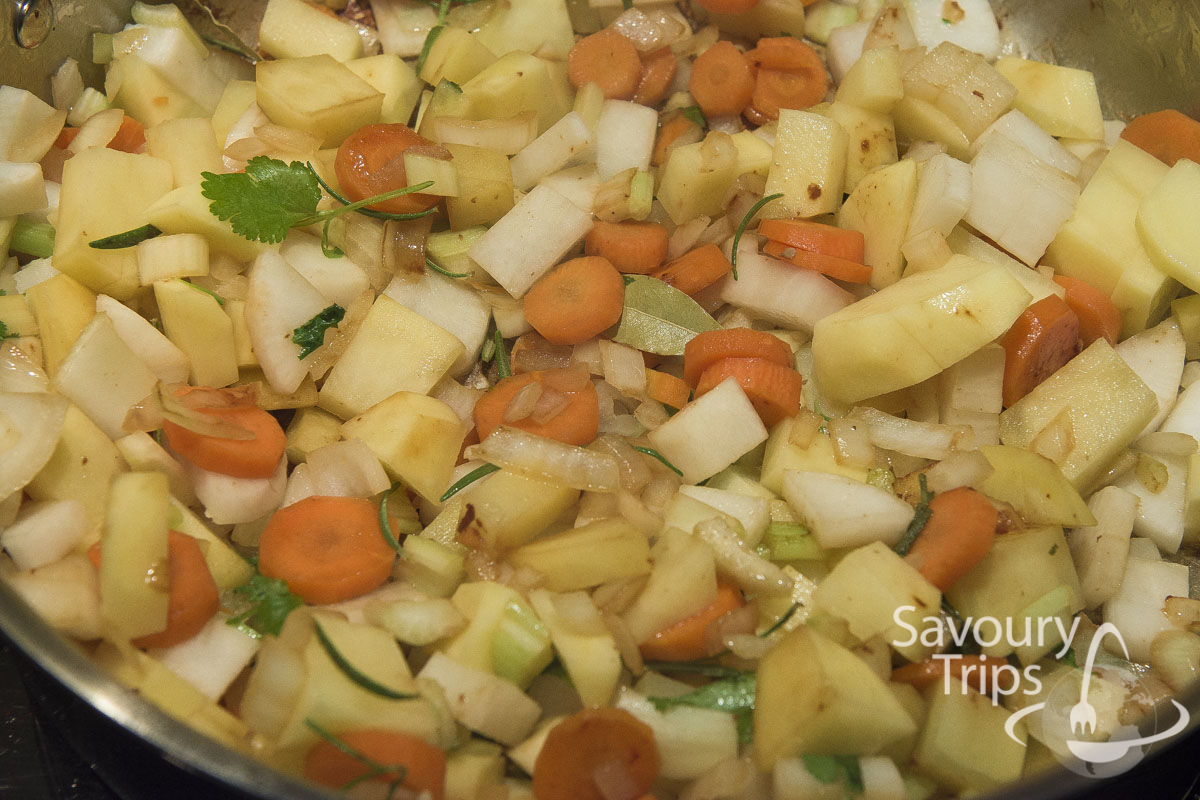 Then, I returned the meat and continued sautéing. 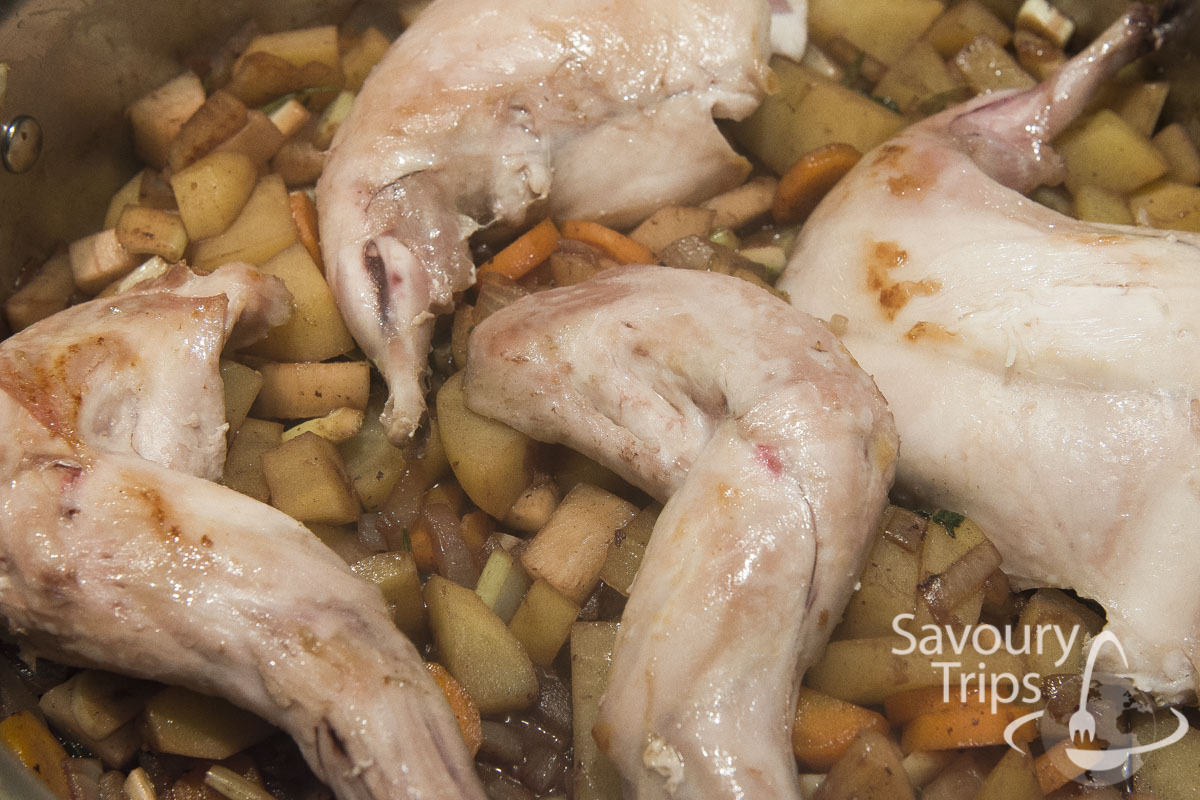 Added the broth and wine and left to simmer. 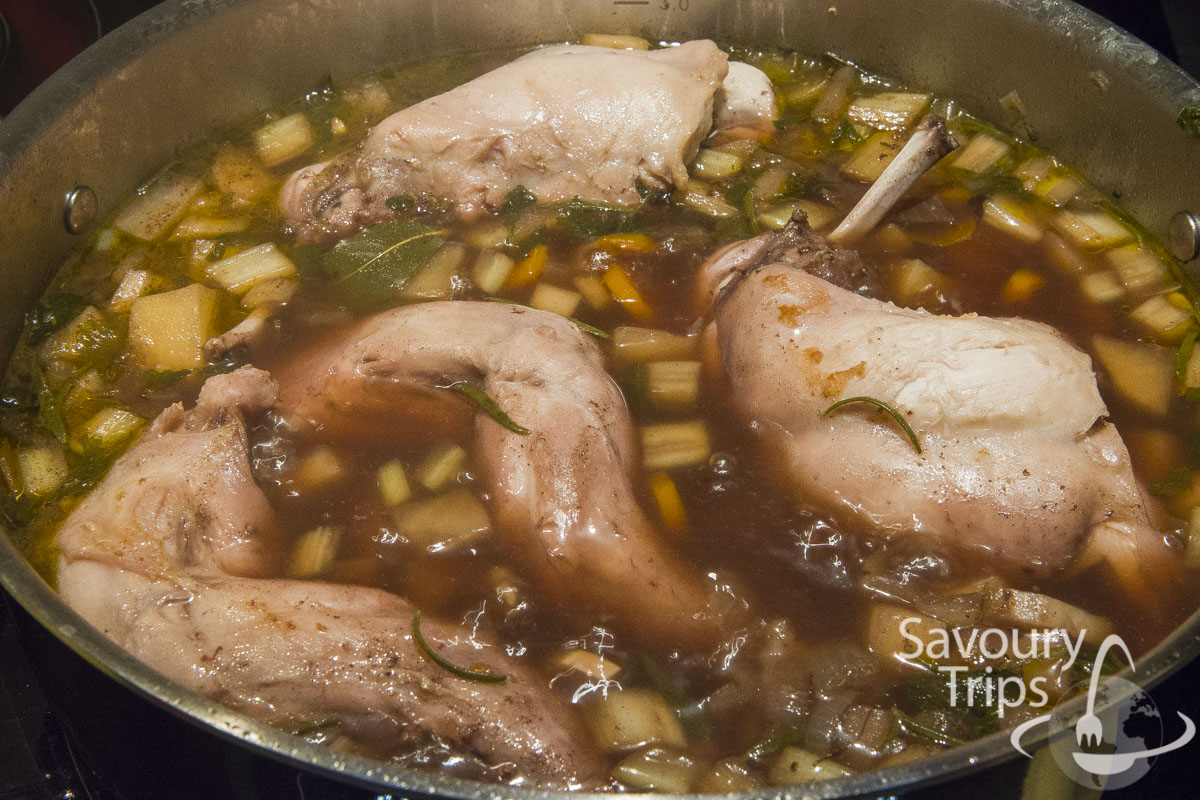 In another saucepan,  I put the pickled onions and green onions on butter, to cook. 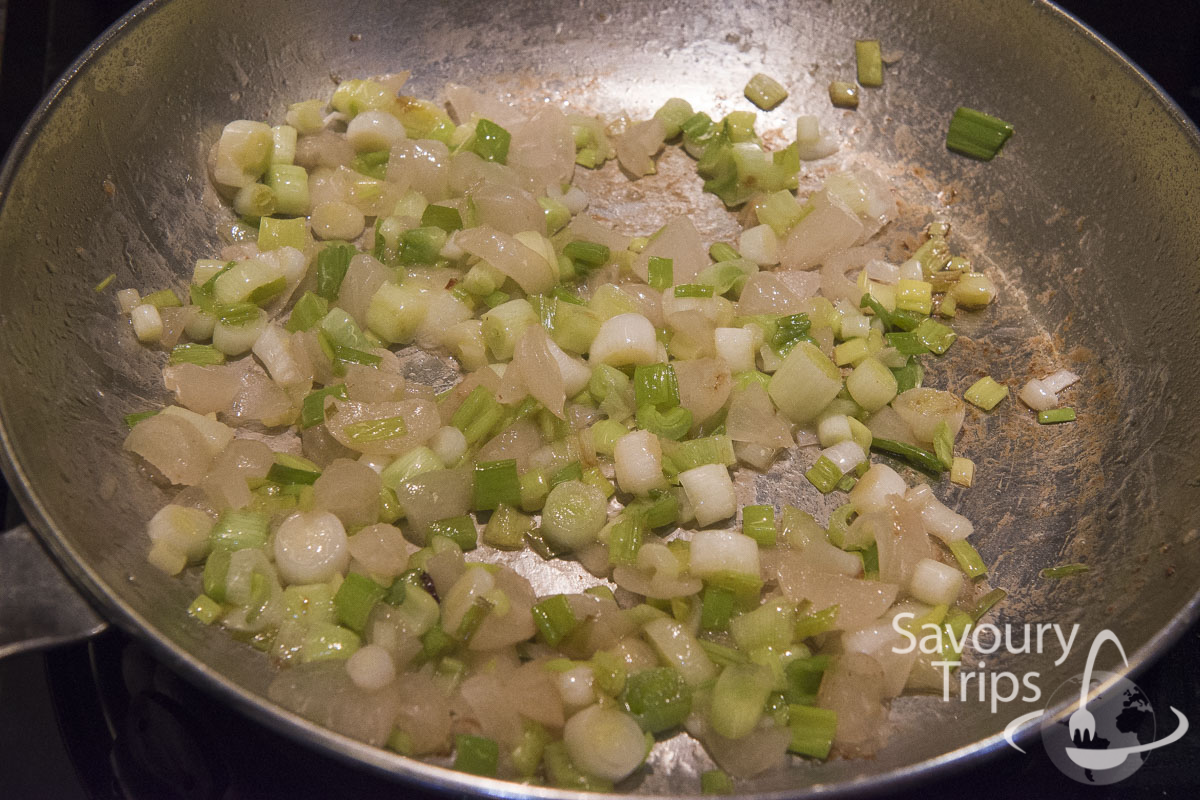 Then I added water and simmered until the liquid is not reduced. 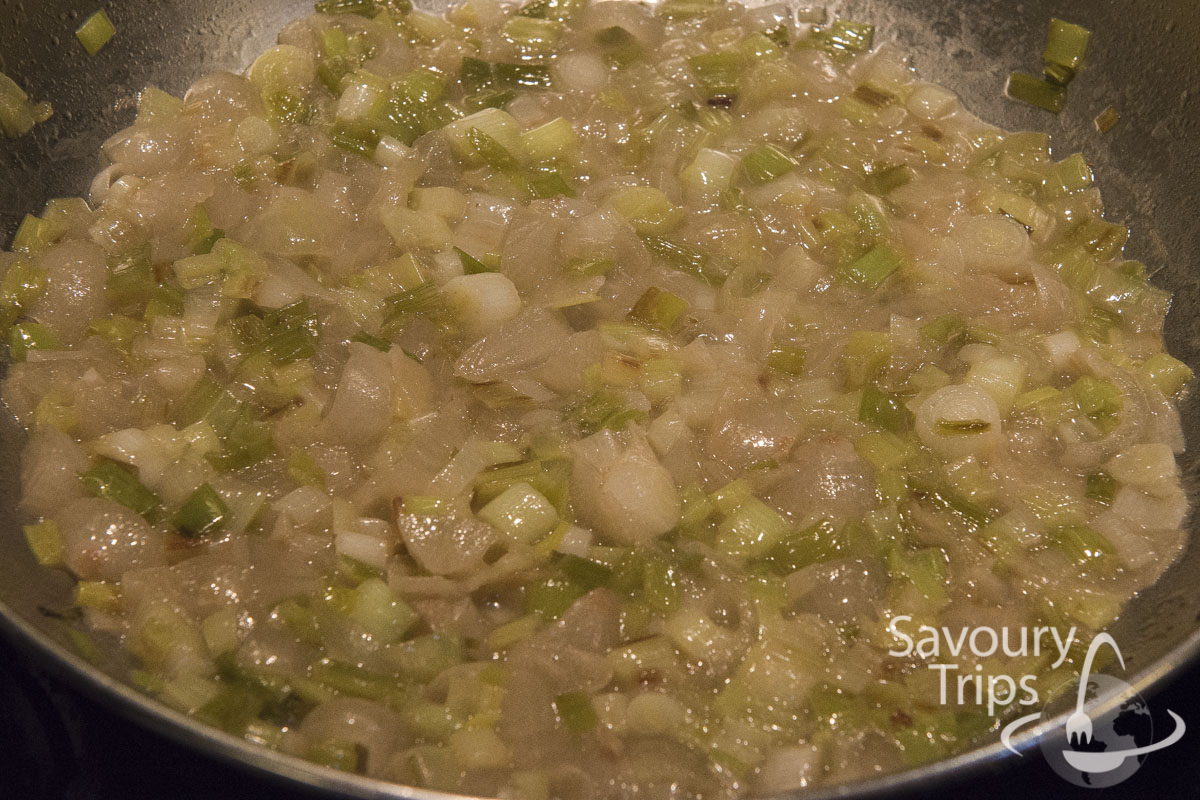 Then pancetta, in my case was dried meat. 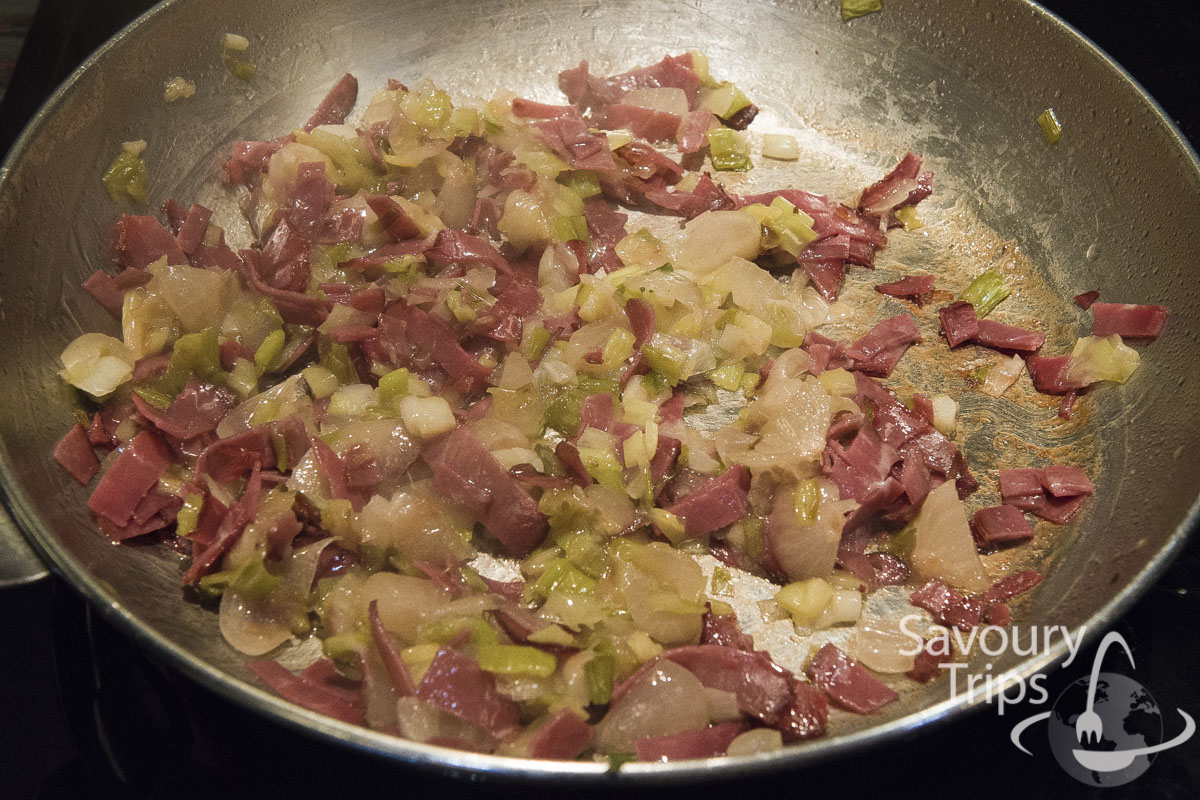 Added mushrooms and continue to Sauté. 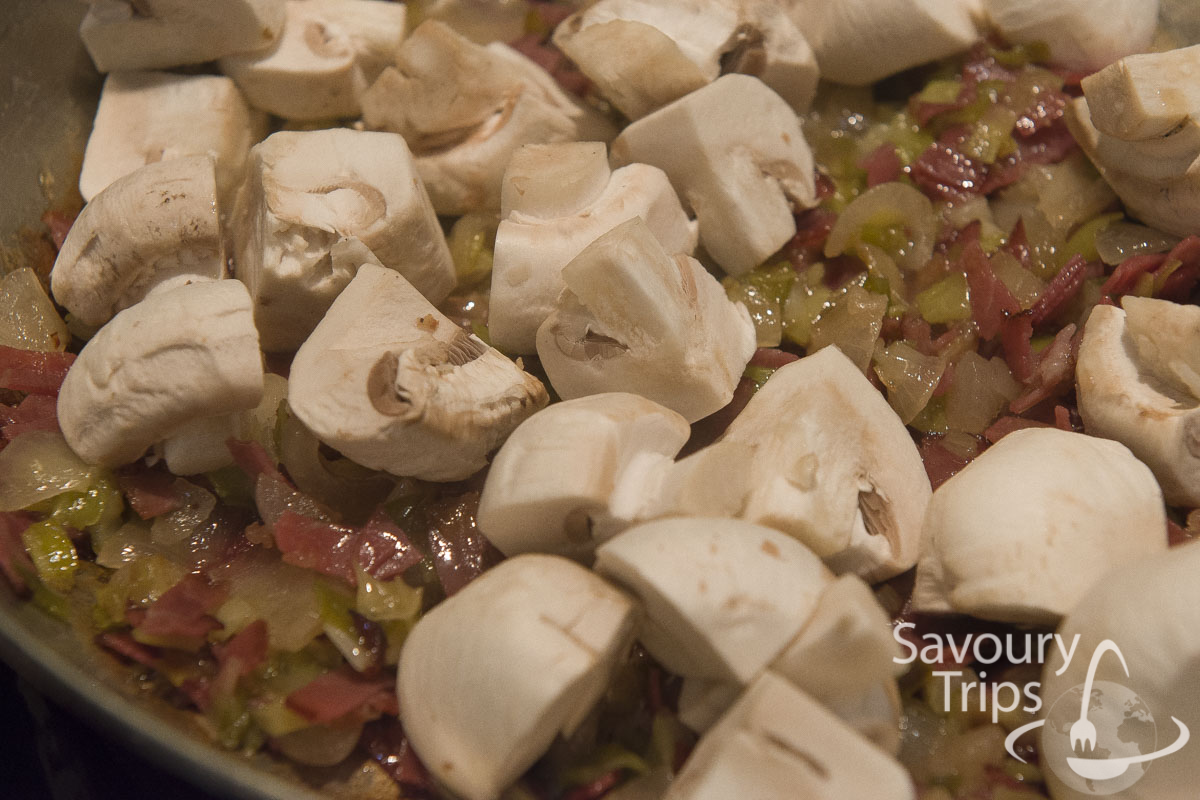 We are going back to the first saucepan.

I blended vegetables and additionally spiced them with some dry spices to add some taste (I like spicy). 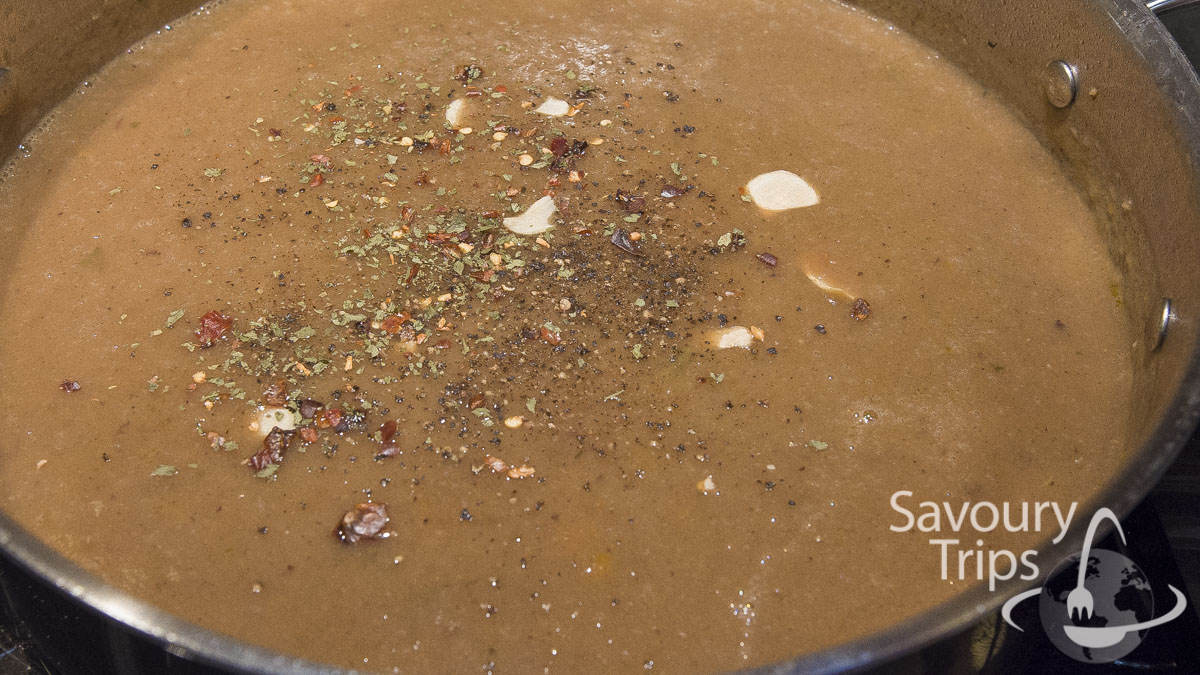 I put the meat again into the saucepan. Also added mushrooms from the second pan and continued to cook. 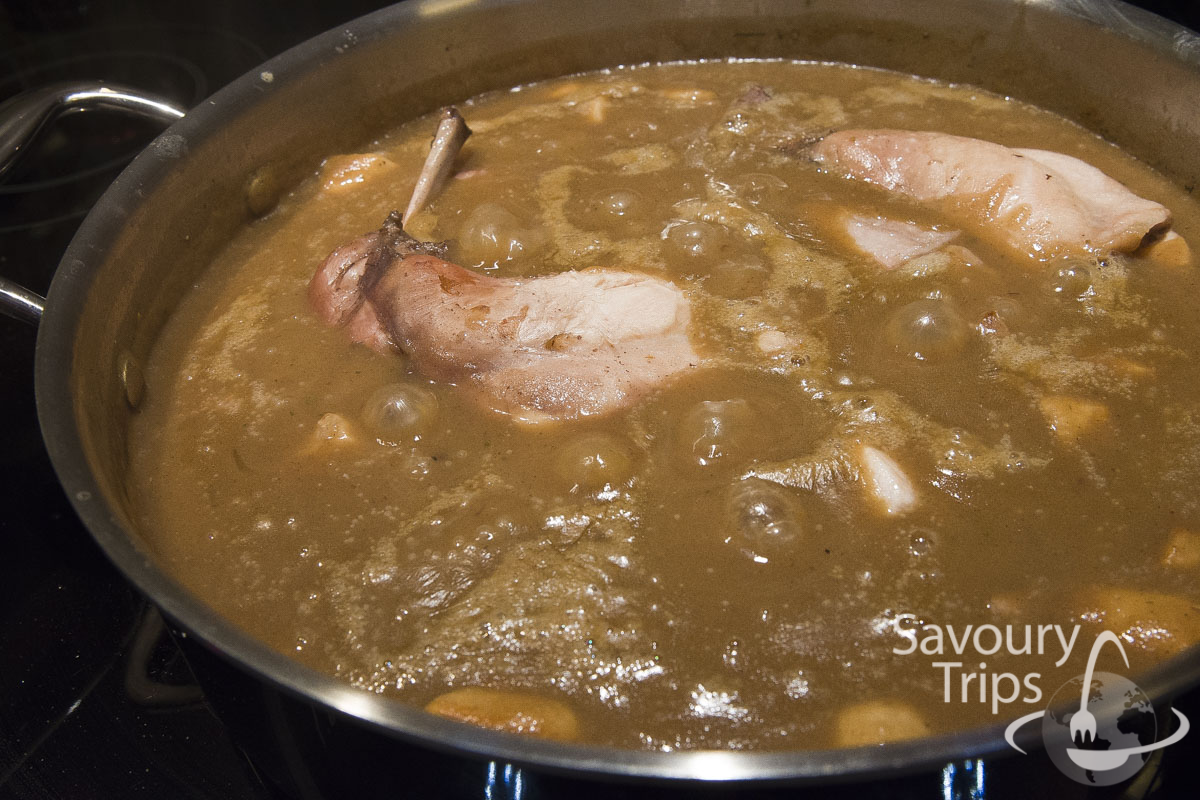 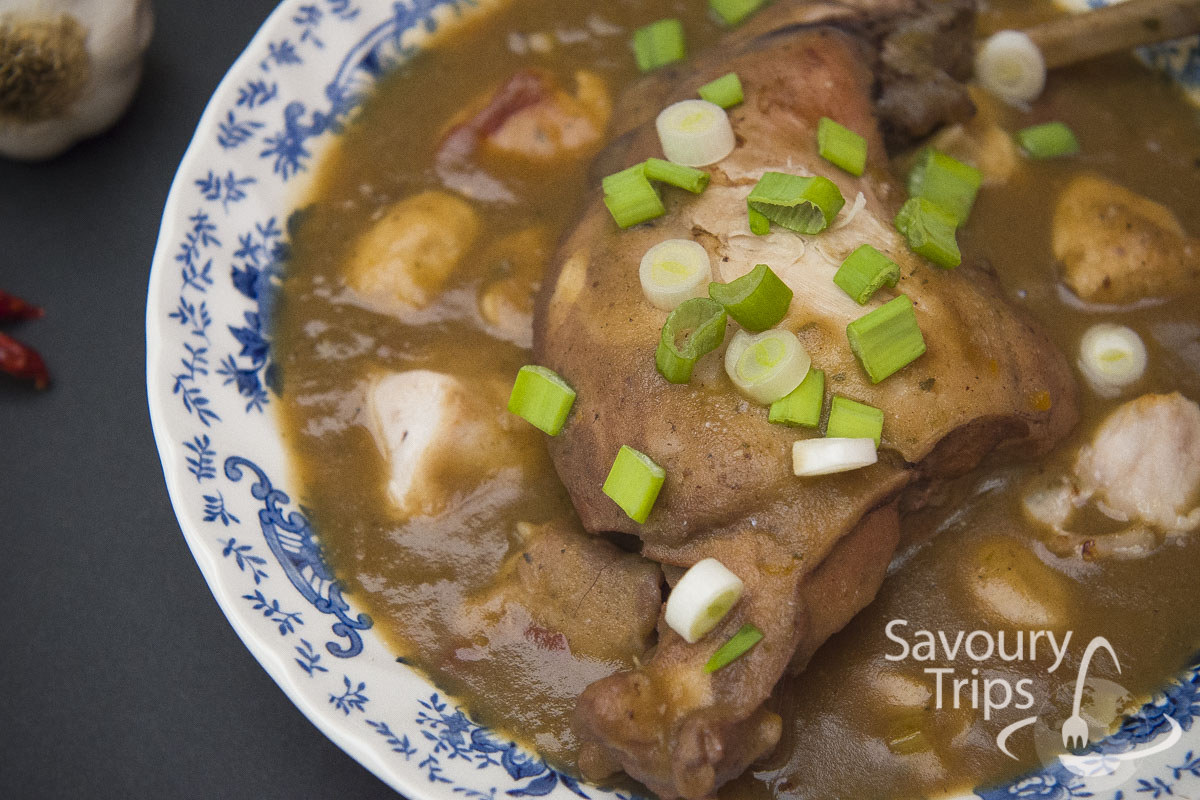 It was juicy and the meat melts in your mouth 🙂

The taste was better than chicken :). 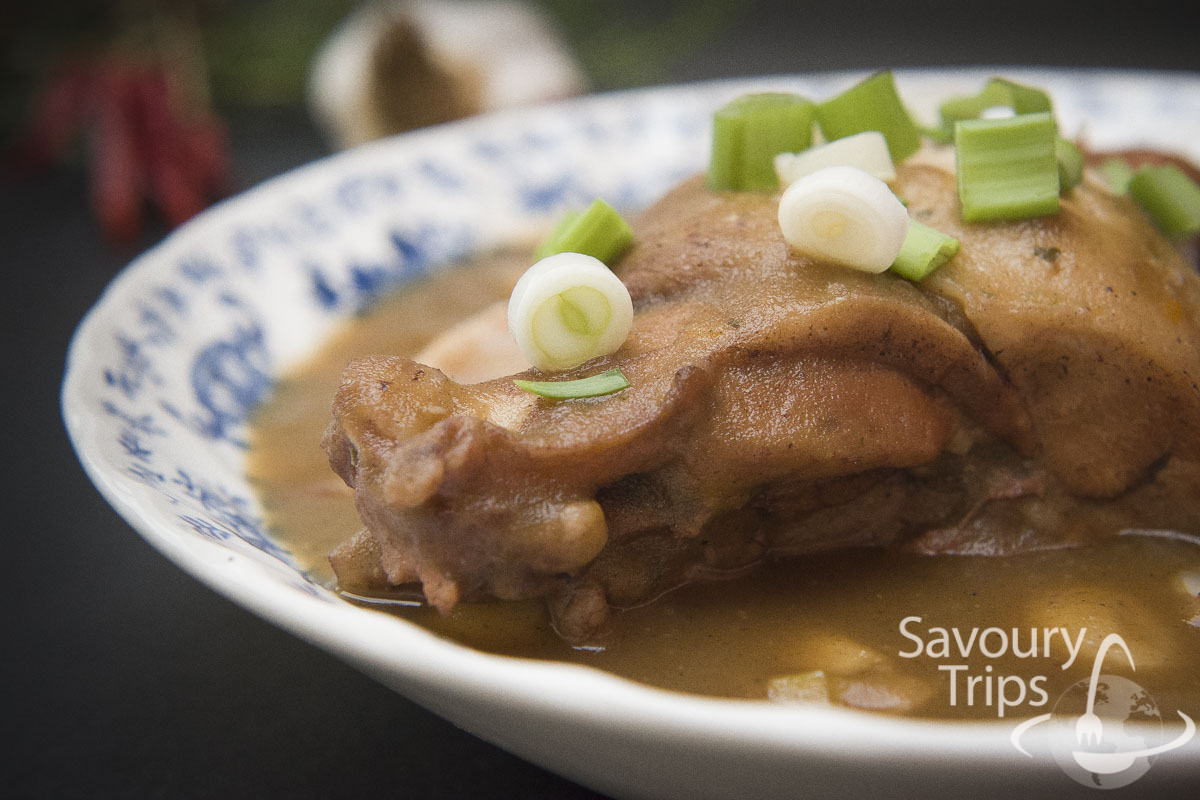