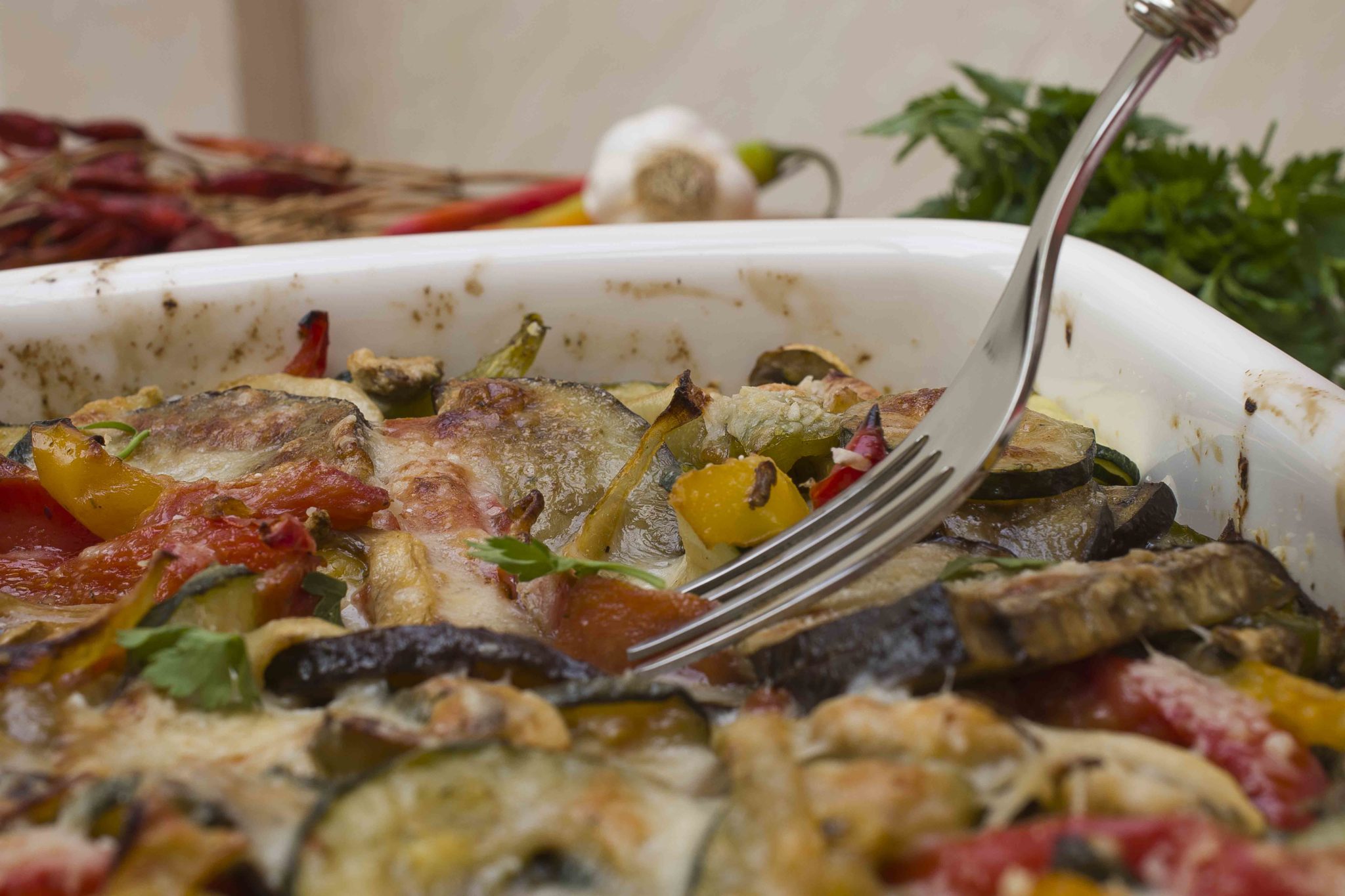 How to make the perfect Ratatouille?

Another worldwide known French dish. It answers to the name ‘stewed vegetables’.

Ratatouille comes from Provence, or Nice more precisely, so it is often called “Ratatouille niçoise”

As for vegetables used in preparation of this dish, primarily there are tomato, onion, zucchini, eggplant, pepper, garlic, marjoram, basil.

There are mushrooms in my version as well as some hot pepper and some parmesan. 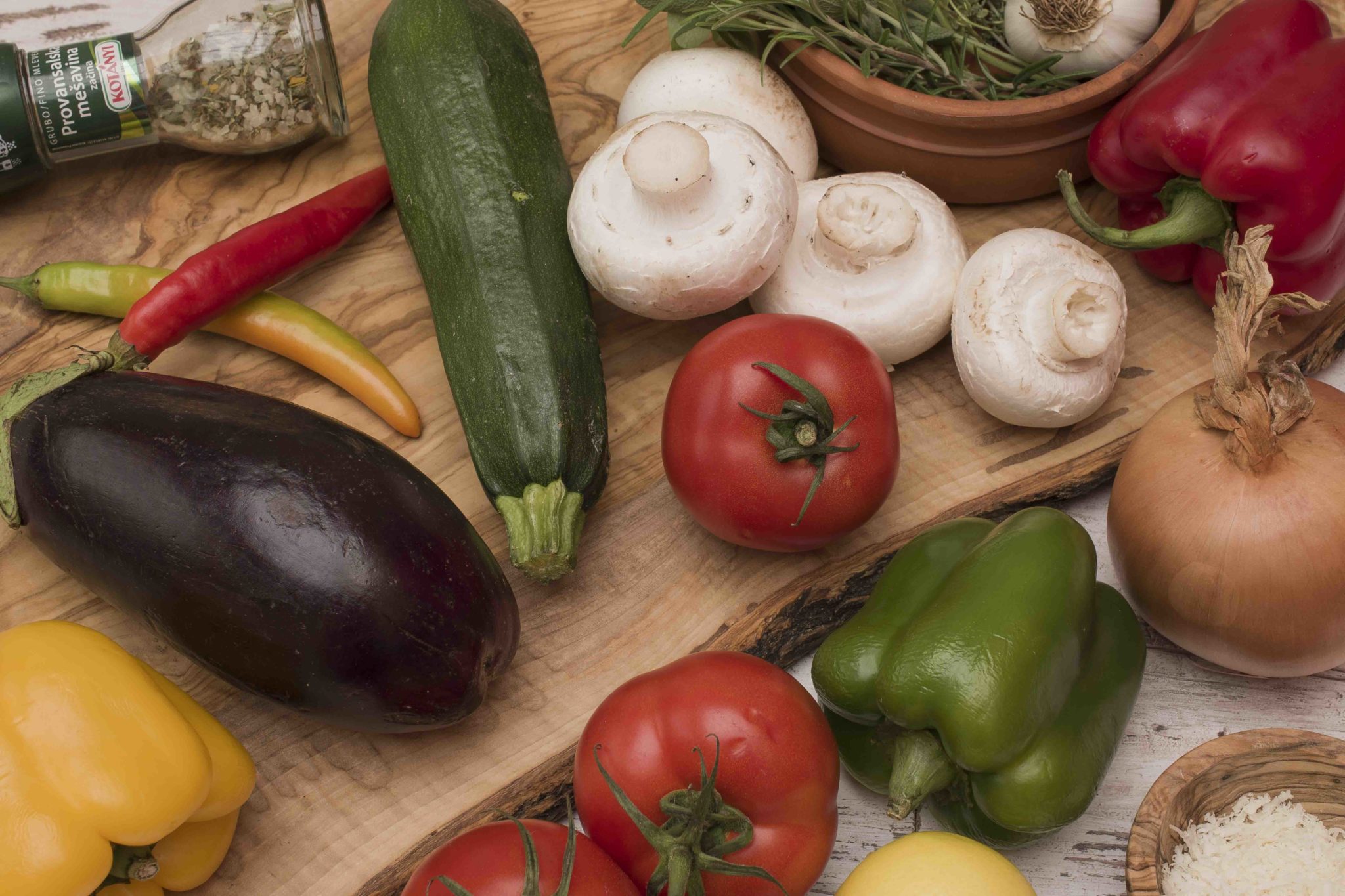 As people are prone to blowing things out of all proportions, so chefs can make a real cookery art out of simple stewed vegetables.

According to one version, vegetables should be stewed separately (Larousse Gastronomique). Then it should be mixed into one pot and switched to slow cooking so that you get a creamy mixture. However, others say that you should stew it all together, and then roast it in the oven.

Although it appears to be easy, as tradition of preparation preaches, one should have a lot of patience.

This is a kind of dish that, since you’ve already decided to put effort to make it look as if it comes from the French cuisine, then you should make it for more than one day.

Set some time aside for this version… because it is considered an authentic alternative way to prepare this recipe. Blanche tomato to remove its skin, stew red pepper to remove its skin too. Then, take two pans and stew it separately. Of course, after stewing, there is some more work with drying vegetables to remove the extra water and fats on the paper towel.

Then, put some onion, red pepper, zucchini, eggplant, tomato, spices and a glass of water. Stew it all until you get a creamy structure without the excess water.

The second version says to stew everything but tomato, and then combine it all into one dish than can go to the oven, add tomato and spices and roast for another 40 minutes.

There is always the version of stewing onion first, and then add vegetables according to the time needed to cook it. Start with the one that takes the most to cook, to the one which only takes a couple of minutes, like tomato.

According to the modern version, vegetables should be mixed with a savory tomato and red pepper sauce. You should add some spices to the sauce: some sugar, pepper, sweet pepper, salt, pepper, garlic.

When somebody mentions to me that something is a modern version, I immediately connect that with something automatic, fast, not complicated. However, this modern version has crashed all my illusions about the term of #modern.

This version will take you a lot of time to complete too. Roast red pepper in the oven for some 20 minutes. Then, fry onion and garlic in the pan, peel the tomato, get rid of the seeds. Add fried onion and garlic. Season it with parsley, thyme, bay leaf, and cook until all of the water has evaporated. When it does, peel red pepper and add it to the sauce. Thus, you will get a seasoned sauce with which you are going to connect the rest of the vegetables.

Now, it’s time for zucchini and eggplant, and some more tomato which you should cut in thin slices and order it in the baking dish. Season it once again and roast in the oven covered with a foil at 130°C for 2 hours. Pour some of the cooked sauce over every layer, and keep some of the sauce for the very end.

After two hours, remove the foil and roast for another 30 minutes, but cover it with the rest of the sauce to which you added some more seasoned balsamic vinegar before that, as well as some olive oil and thyme.

Immediately before you serve it, put it under grill in the oven once more to caramelize the upper layer.

You are going to enjoy in the preparation of this version, unless you get bored 🙂

The best version for the end

You probably had no doubts which version was the best… well, ours, of course. It is not too demanding, as well for the ingredients. It is based on the original version, and very tasty too.

This time, kids didn’t ask about the meal neither they frowned on the mention of the vegetables. Mushrooms and parmesan have successfully completed their assignment of deception 🙂

I got all the vegetables and spices, even more than I needed. 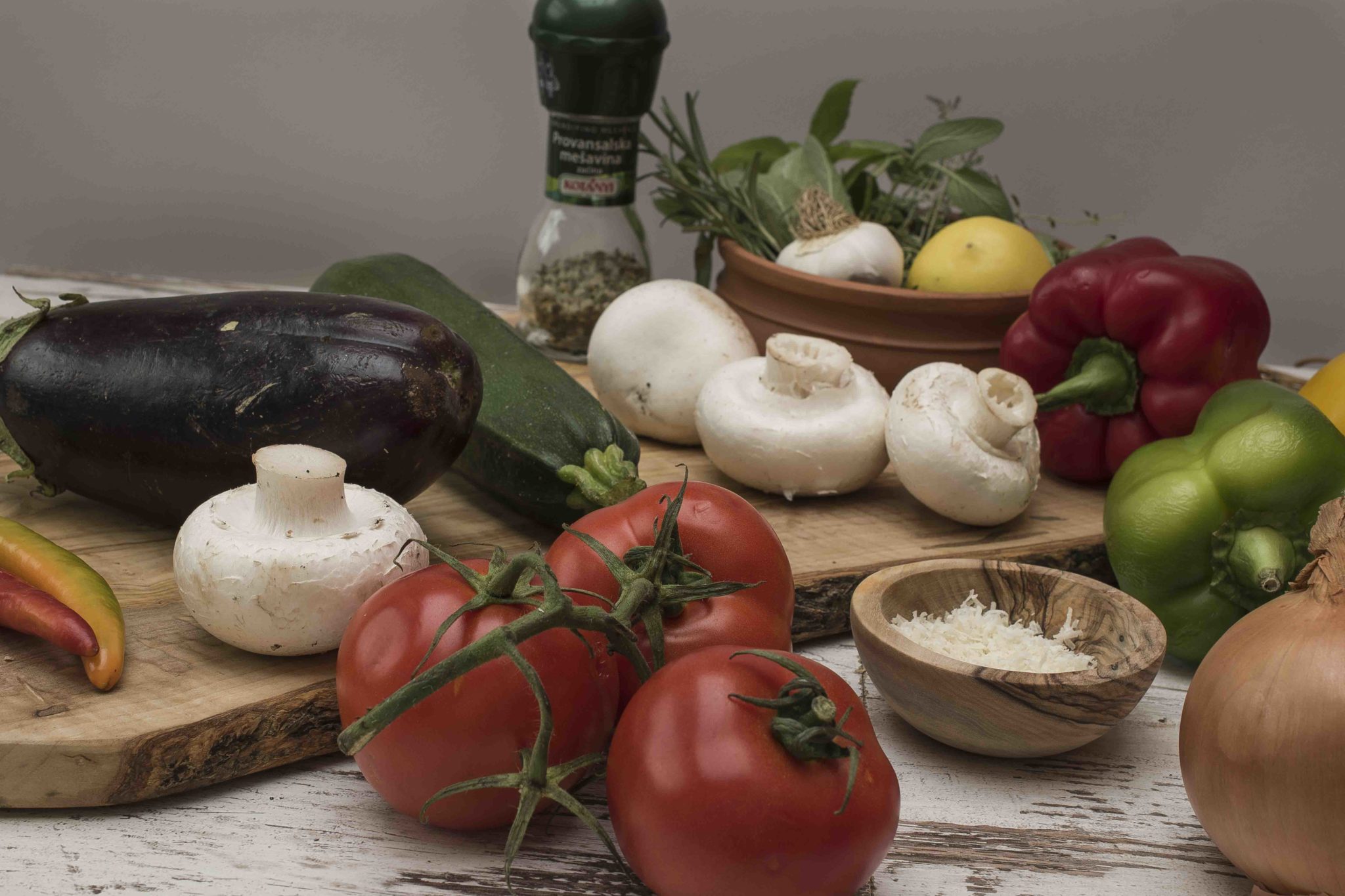 Then I sliced it all nice and patiently. 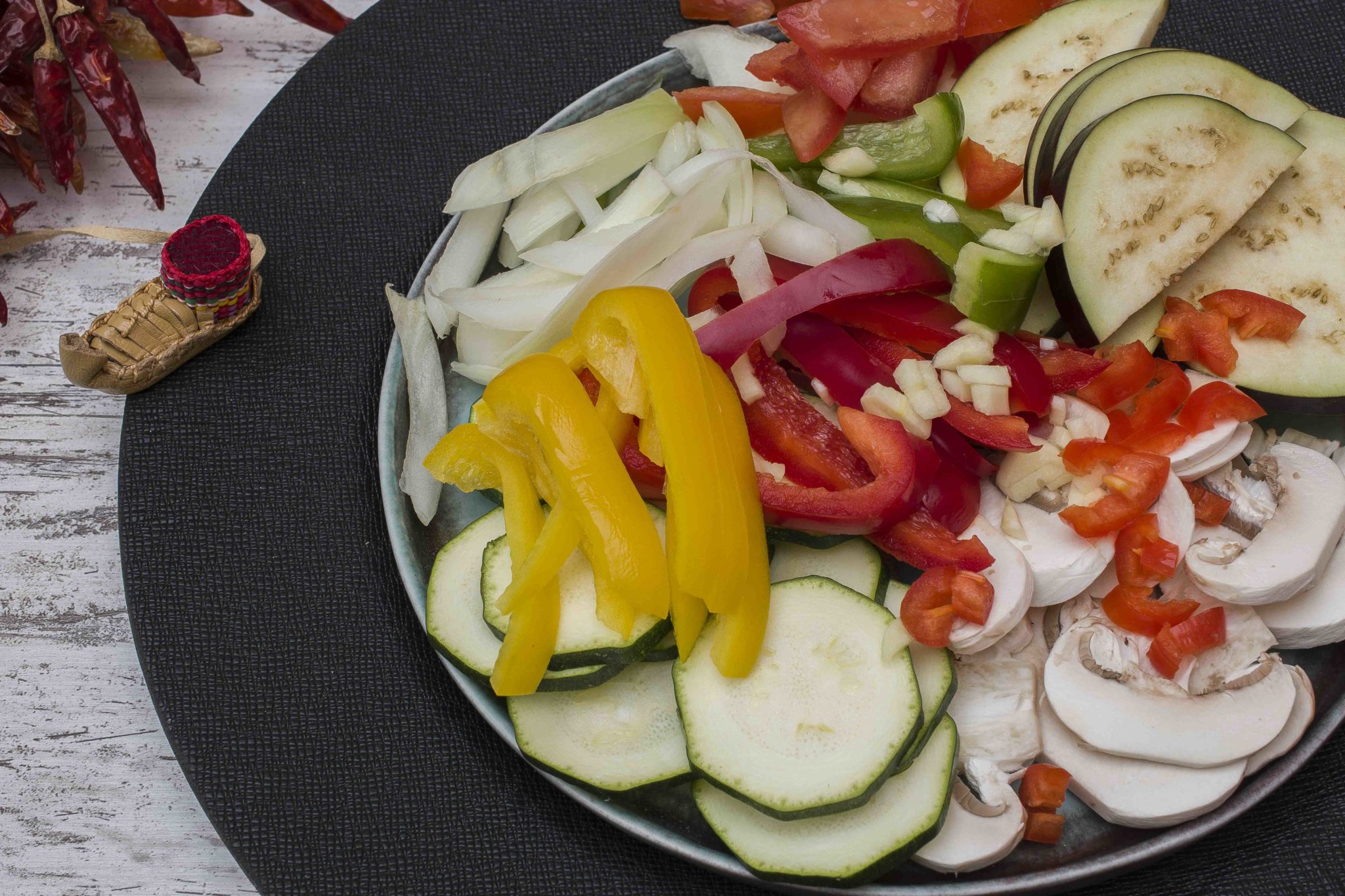 Look at the colors… how could somebody resist this? 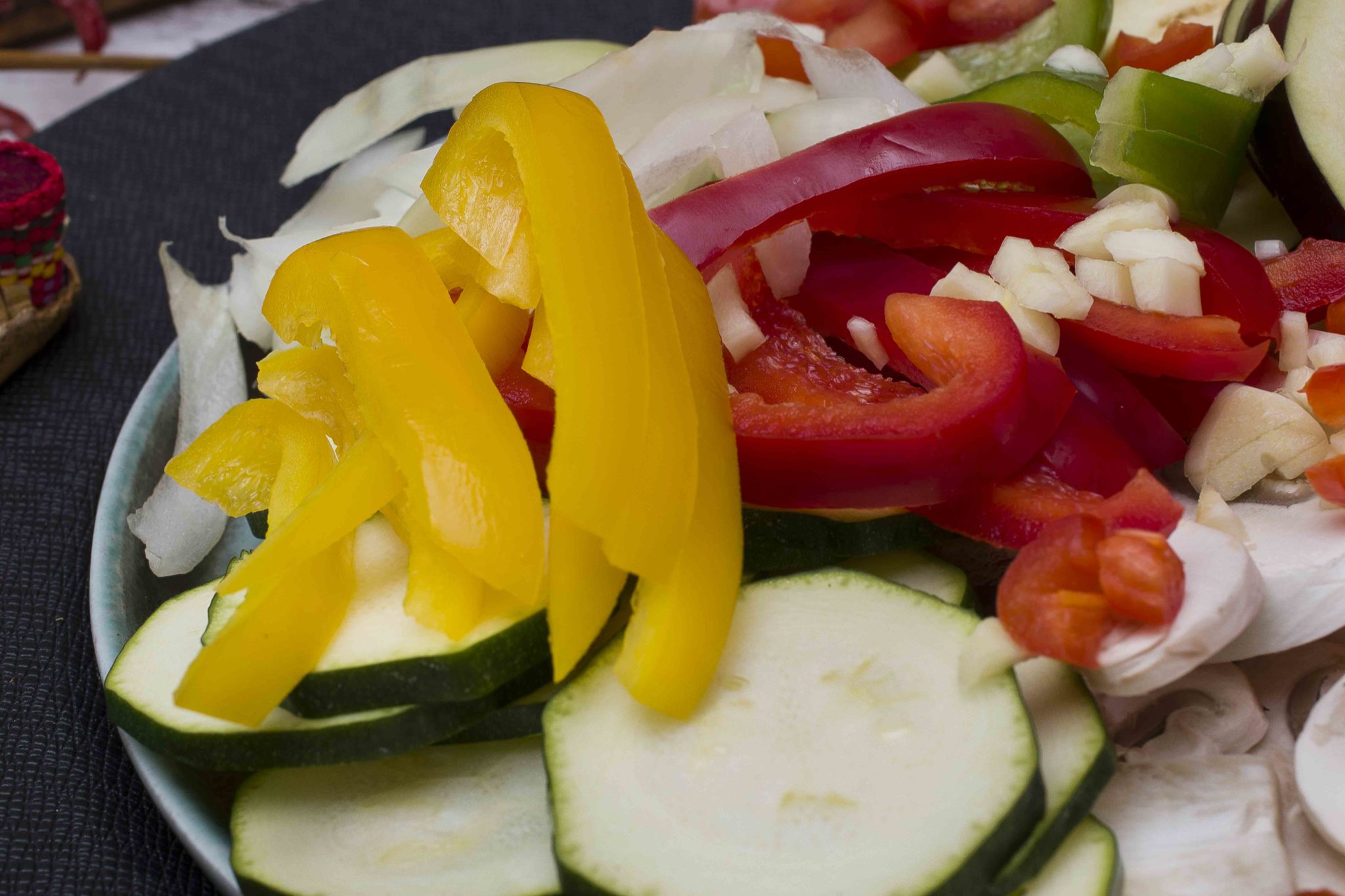 First, we stew zucchini and eggplant, and then leave them on the side. 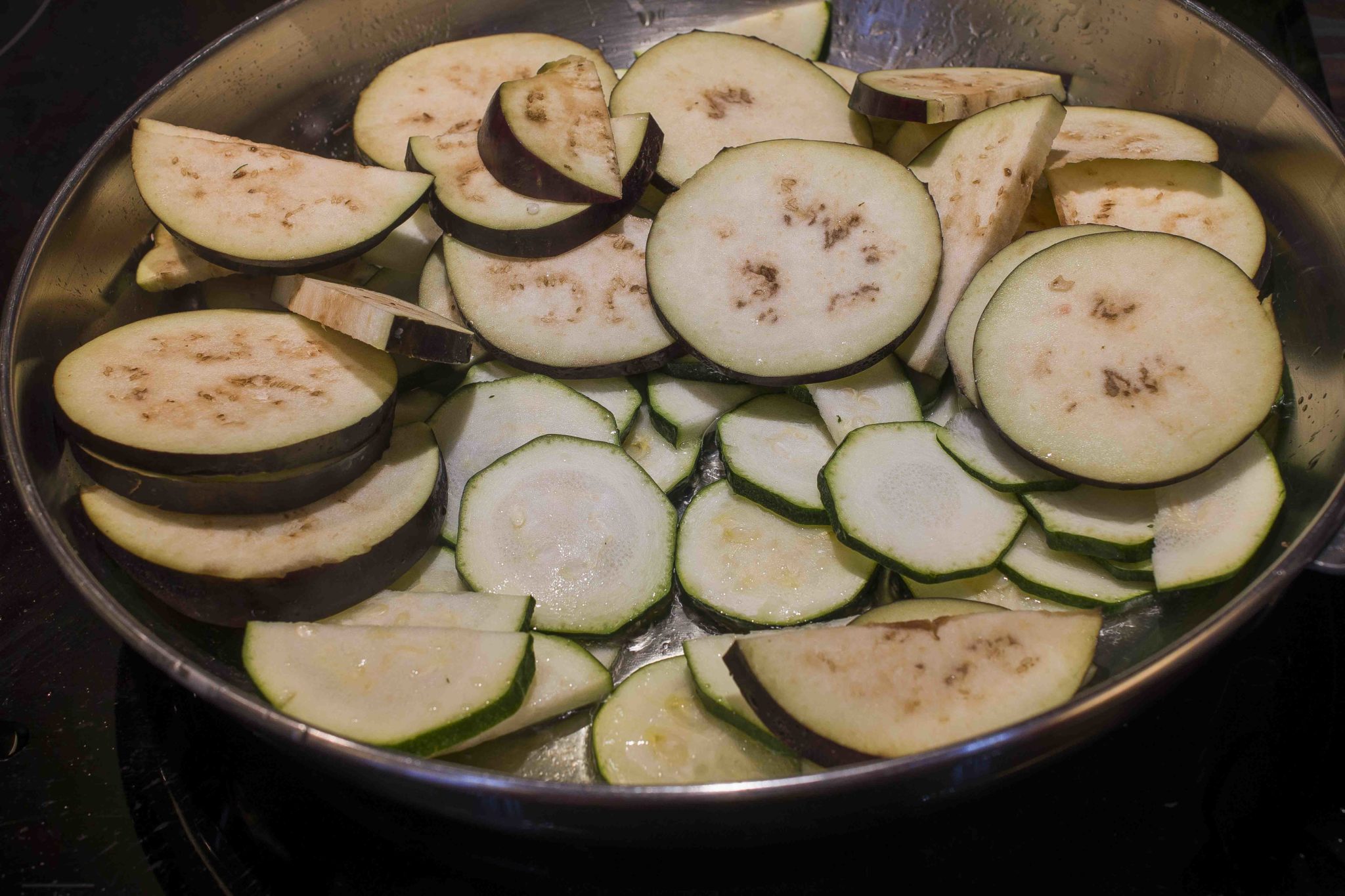 Then we slice vegetables. 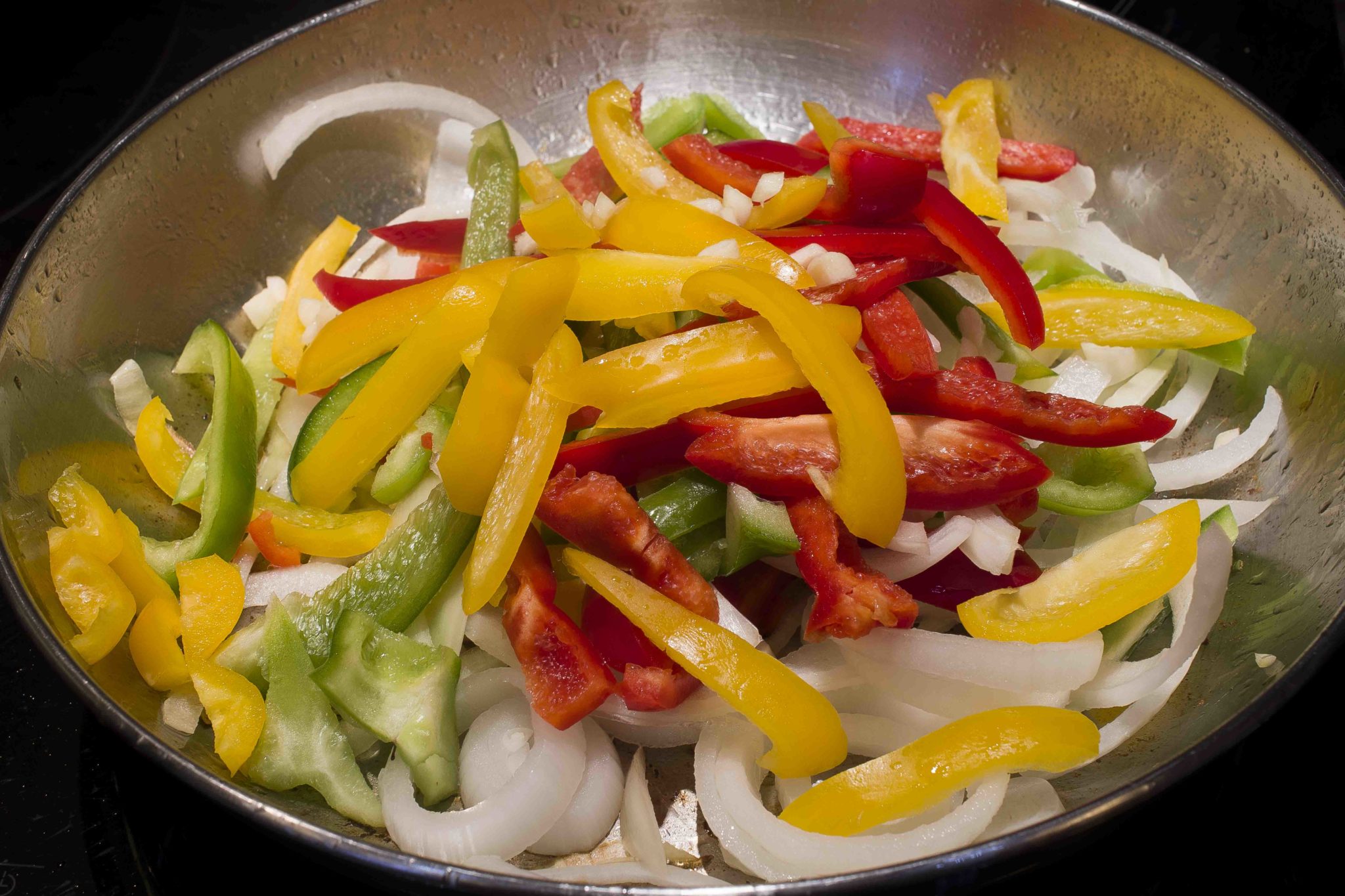 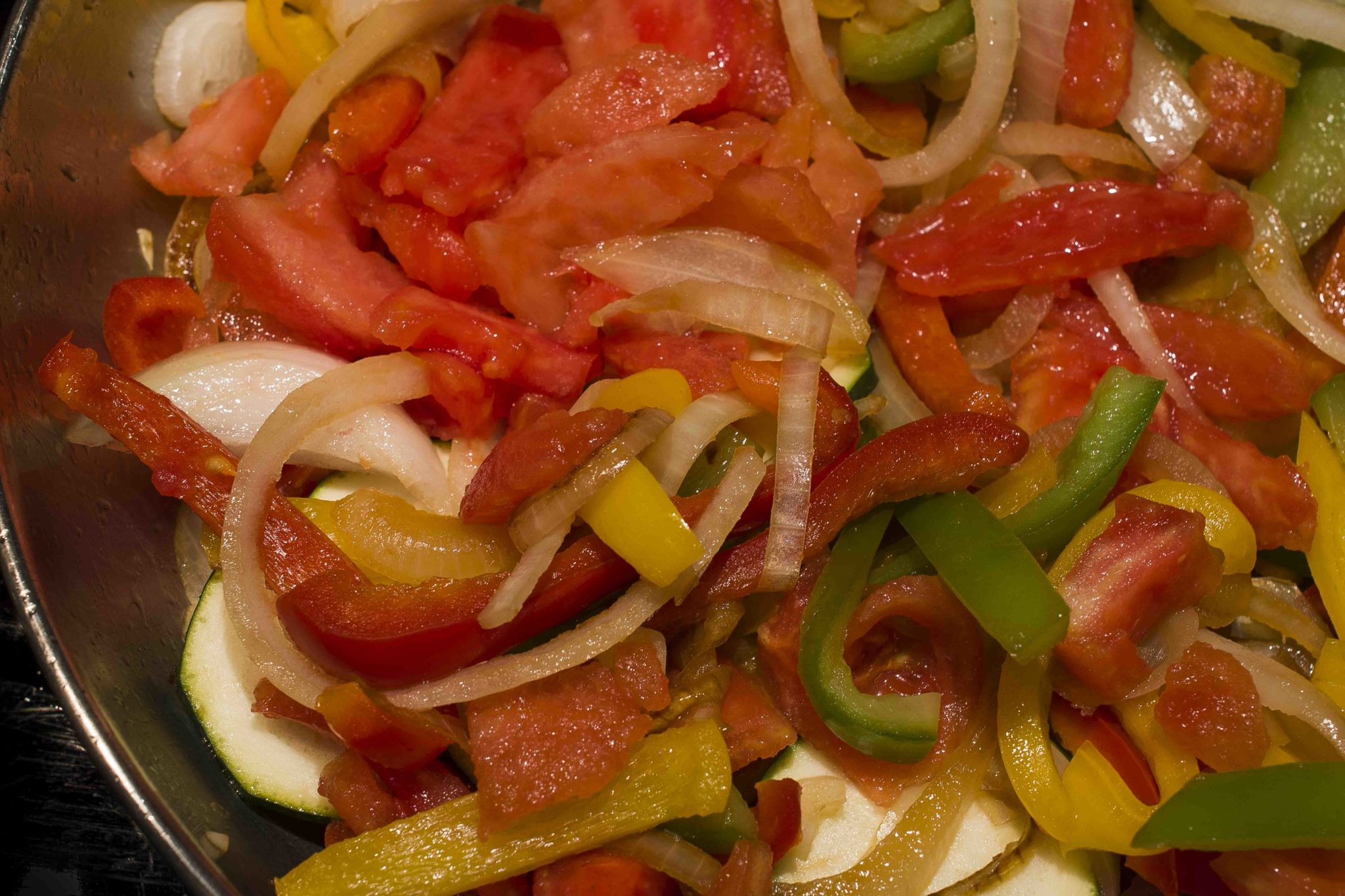 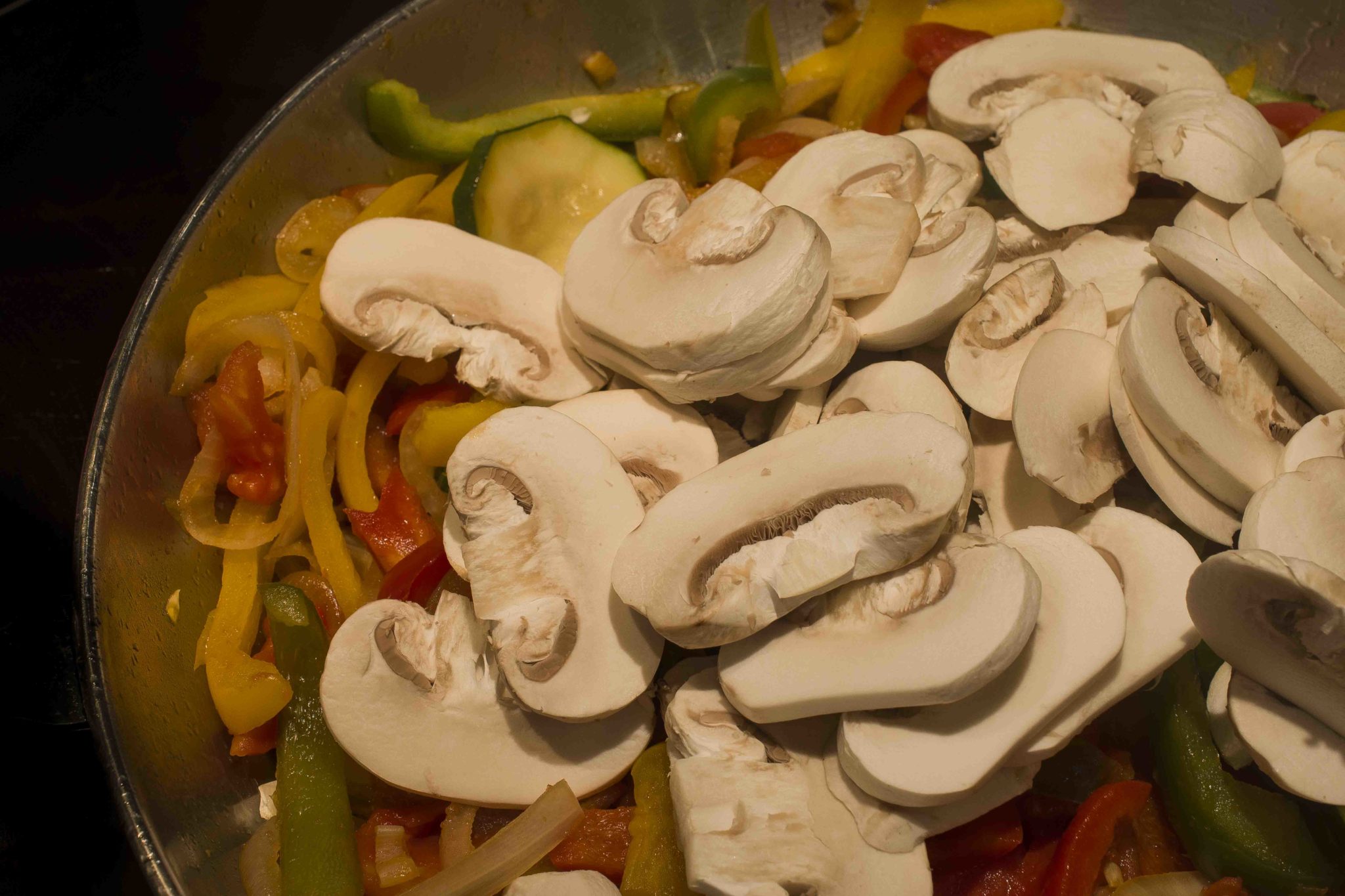 And some lemon skin. 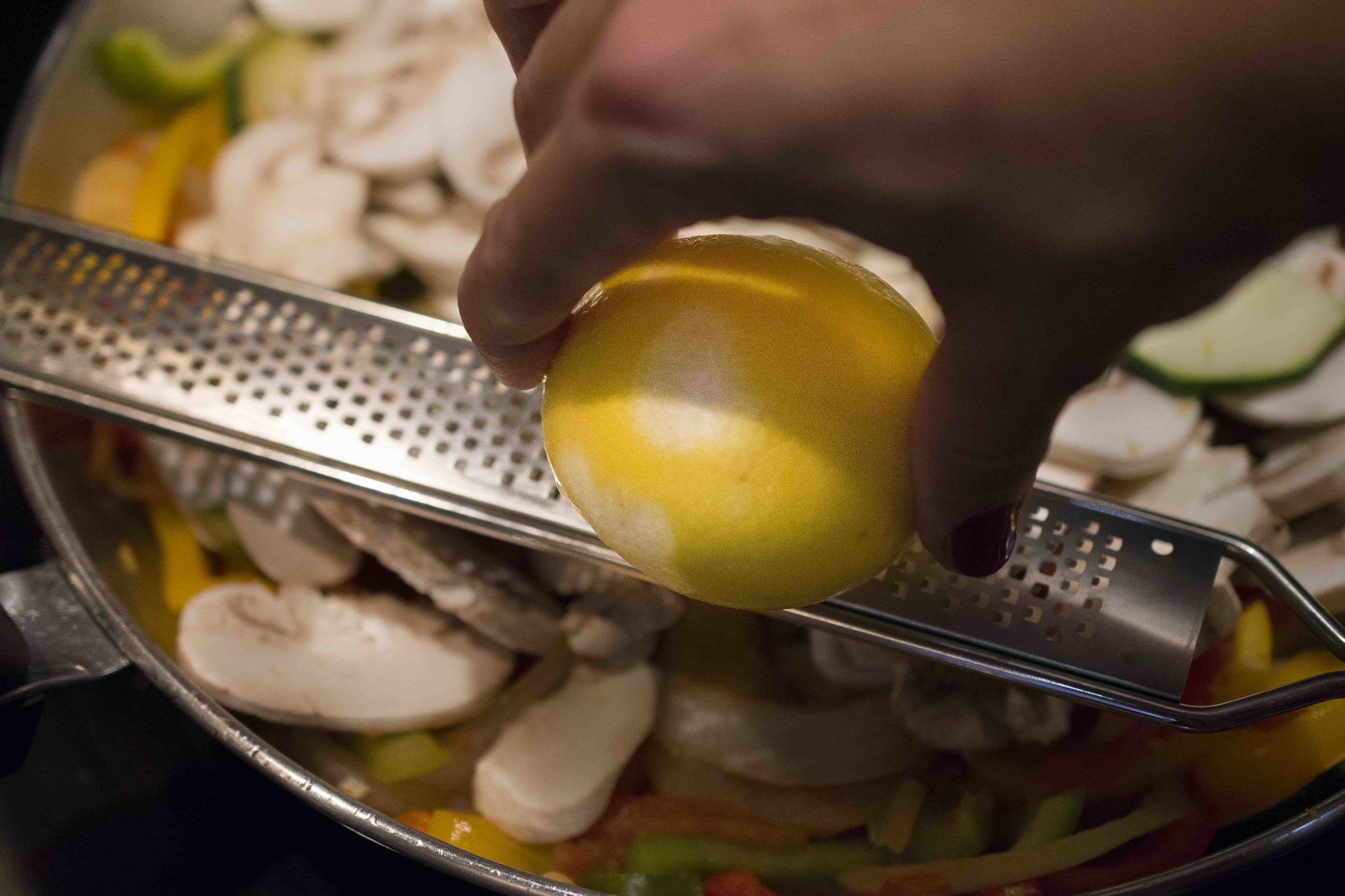 Of course, some French spices. You can get almost done Provence season mixture. If you prefer your own package (as I do) then you should mix it (1 tablespoon basil, 1 tablespoon marjoram, ½ teaspoon rosemary, 1 tablespoon thyme, 1 bay leaf, 2-3 lavender flowers, and optional fennel and sage). 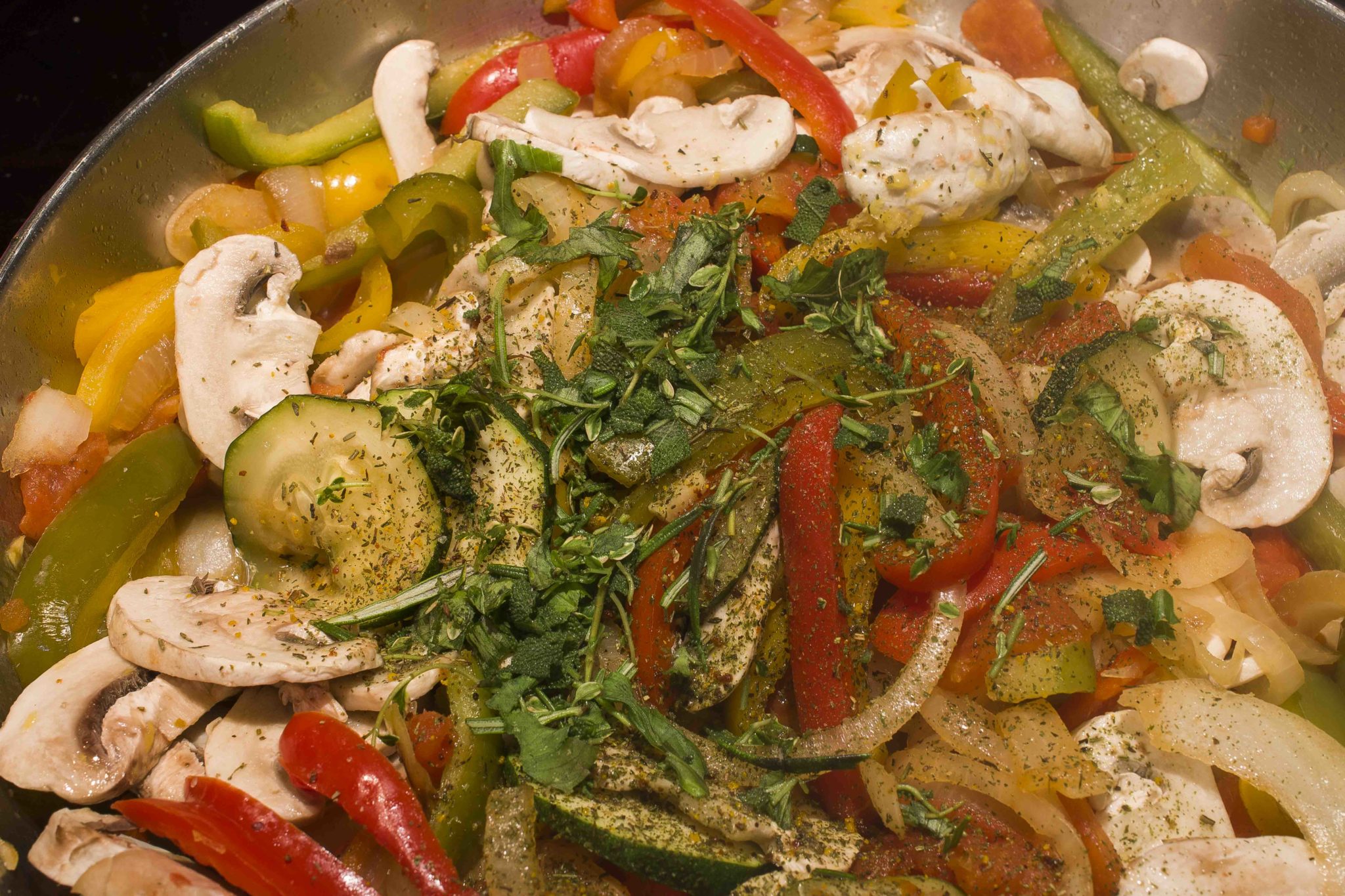 Until you stew vegetables for the Ratatouille stewed vegetables, blanch tomato on another burner, so that you  would remove its skin easily. I sliced it and cleaned it of seeds, and added to the rest of the stewing vegetables. 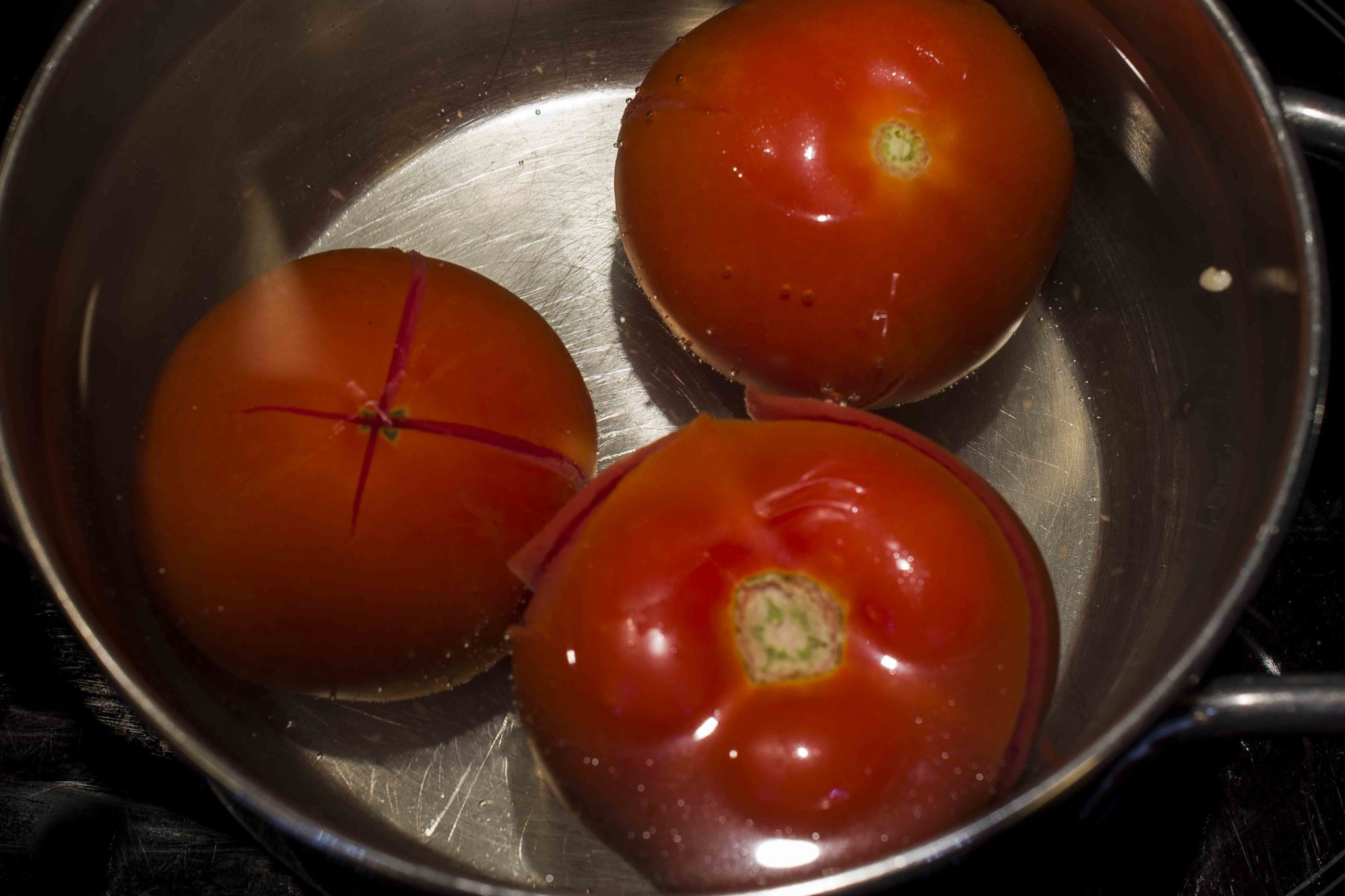 Then I ordered it all into the dish and sprinkled some parmesan in the middle, and some more on top and put it in the oven. 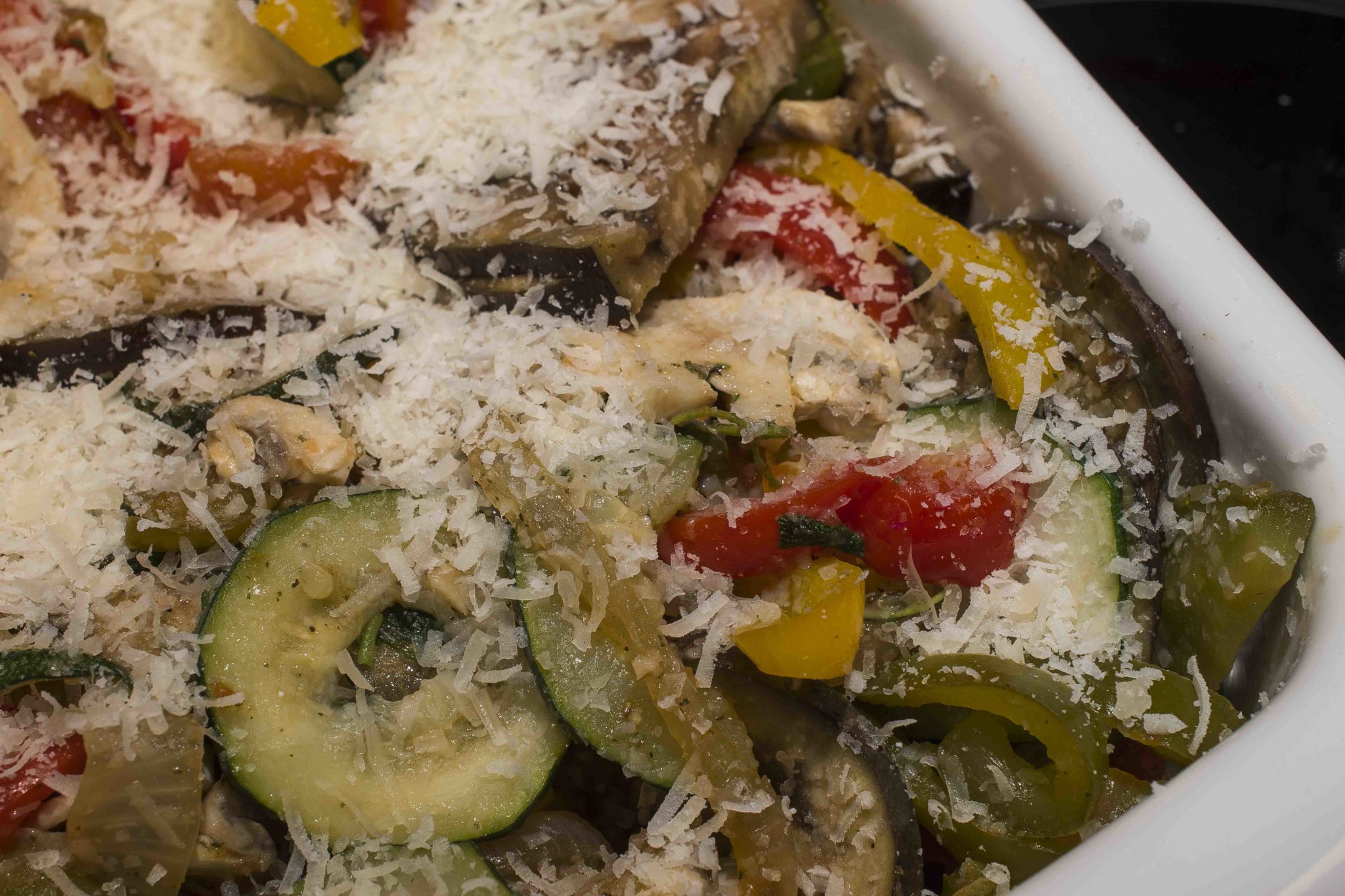 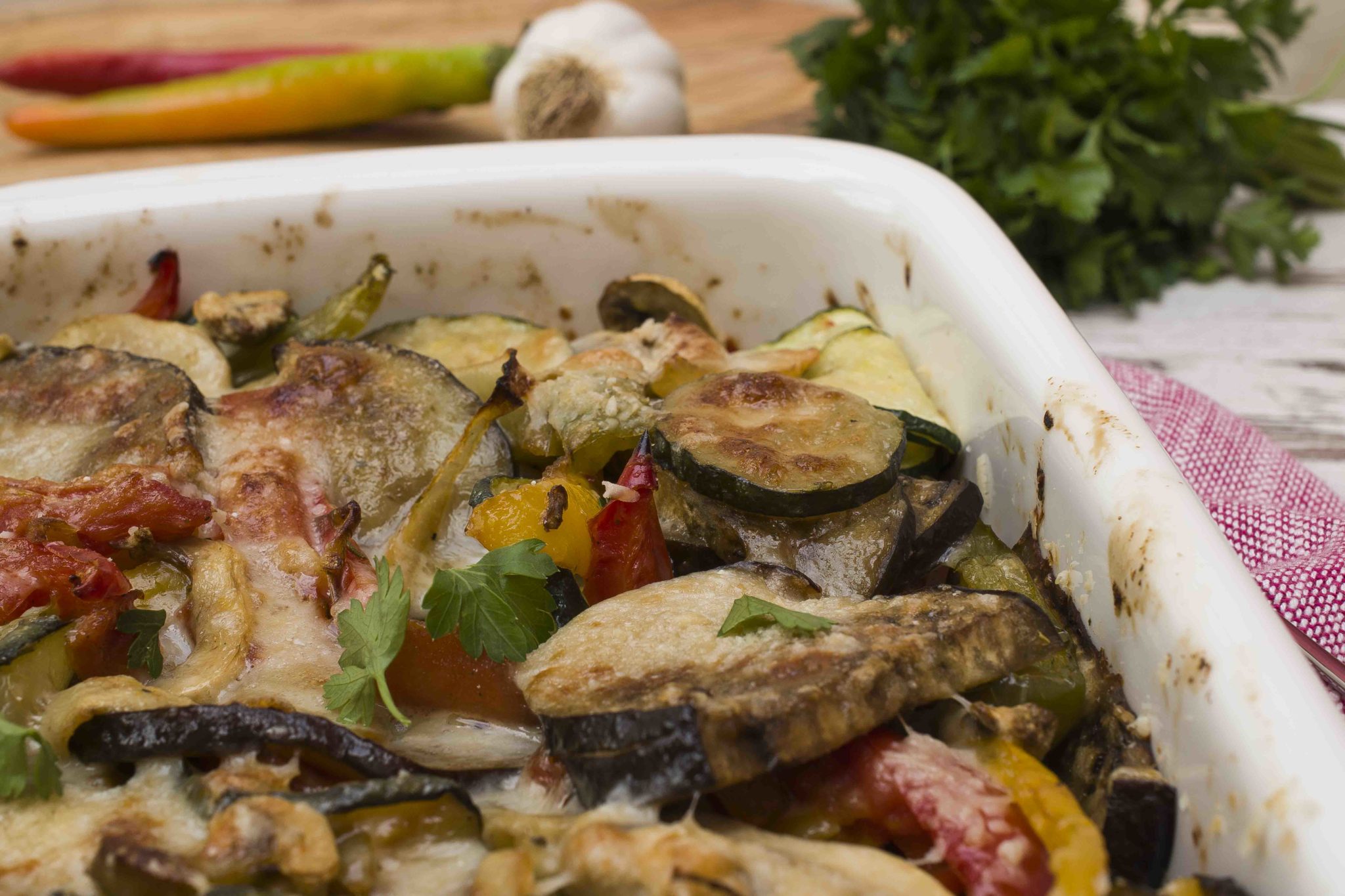 I couldn’t resist the smell, so I had to try our Ratatouille stewed vegetables while it was still in the dish. 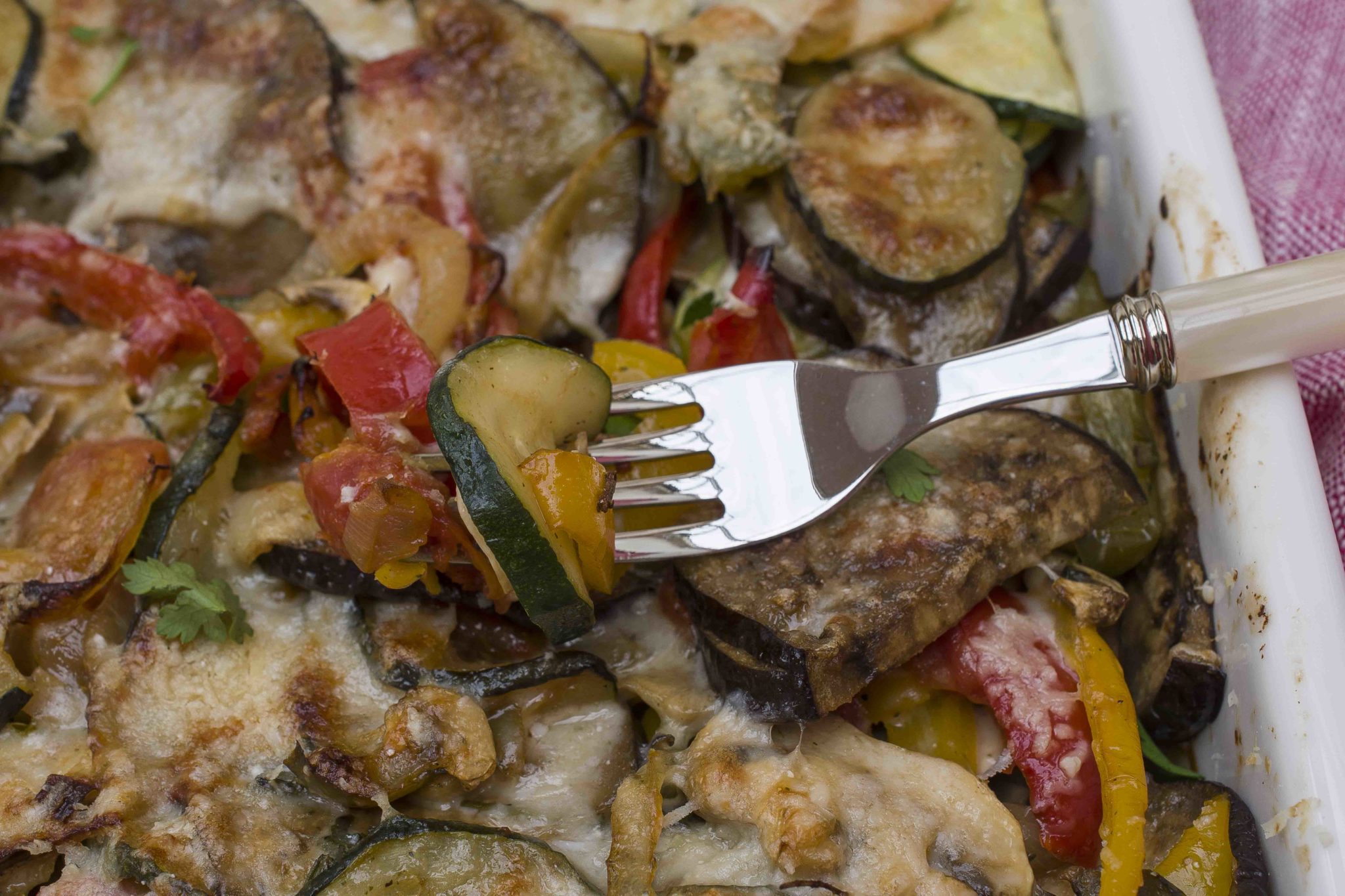 Ratatouille stewed vegetables can be served hot, warm and cold. This is one of the rare recipes which in case you prepare it earlier and heat it later will taste even better.