Homemade lard puff pastry wraps with jam or ‘salasnjaci’ (Serbian dessert) are NUMBER 1 traditional cookies made in Serbia. I think there are no better or tastier old fashioned cookies than these ones.

They are hard to make, there’s a lot to do, so modern housewives avoid that recipe. Of course, I am one of them.

When I crave these cookies, I call my mom and tell her… ‘If only I could have some of those homemade lard puff pastry wraps… and they’re on my table by tomorrow 🙂

The most difficult and the worst part is dealing with the fat. First, it is hard to find in the city… but even if you do manage to find it, it’s like… dry, to say the least. Full of fibers, capillaries and all sorts of things. You need to remove that first… which is a very laborious job. My recommendation is to pay the butcher to do that 🙂

If someone makes lard puff pastry wraps for you, be sure they love you very much. As my mom loves me 🙂

I have heard of those too. Once again, modern housewives are trying to make it easier for them. But, that is just not it, trust me on this one… Those are nothing like homemade lard puff pastry wraps (or in Serbian language salasnjaci or salcici (fatties)).

I believe this dessert comes from Vojvodina, but correct me if I’m wrong. ‘Lale’ (people from Vojvodina) look like they’ve eaten many of these 🙂

First and foremost is to prepare the fat. A real donkey work, in case you weren’t lucky enough to have your butcher properly clean it, i.e. remove all the fibers and grind it. If that wasn’t the case, you would have to do it all yourself, while greasing everything in and around the house.

This might seem demotivating… but the outcome is a magnificent and irreplaceable taste of homemade lard puff pastry wraps.

You can either opt for handling the fat yourself, or find someone who loves you very much… as my mom loves me 🙂

By that time, you probably still couldn’t remove all the fibers, but a mixer can help with that. You should mix the fat so that it is foamy, and while mixing, you will manage to remove all of the leftover fibers.

In case you have managed to get this far, you can do it. What is important is not to give up, because it will be worth your while 🙂

Once ground and mixed fat, you can use to coat the dough. The amount of fat is not fixed… around 500 g… it is better to coat the dough more than once… the surface will look much better, and the cookies themselves much tastier 🙂

And now, the easier part of work

Place yeast in warm milk, add some salt and sugar and squeeze one lemon in it. Leave it for yeast to grow.

Once the yeast grows, add eggs into the milk and stir it all together… use your hands…

Add some flour and knead the dough… you can add a spoonful of fat into the dough, combine it all well so that you get a compact lump.

The dough shouldn’t be neither too soft nor to stiff.

When the dough has grown, get the rolling pin and spread it until it is 1 cm thick. Make sure you get a geometrical shape while spreading the dough, a cube for example… try not to have spikes on every side. That is not such an easy thing to do, but you can manage it 🙂

After you’ve spread it and made it thinner, coat it with fat and put its ends together, closing it like a book. Leave it on the side for another 10 minutes. Next step is the final spreading and making it thinner…

My mom’s instructions were that is shouldn’t be thicker than the little finger… but then she remembered and added… ‘However, as your little finger is not a proper measure since it is small and skinny (I don’t know what it should be like, if its name is little finger), then make it 1 cm thick’ 🙂

Now, after we have spread it to be as thick as someone’s little finger, because mine wouldn’t do… we should cut the dough in straps… which are then cut into cubes (you can choose a different shape, because it makes the final look of our cookies), the size of a hand. However, my mom never made it clear whose hand she was referring to. I dare not ask if it is mine or my neighbor’s 🙂

It wasn’t long until mom fired another one, as only mom’s can do 🙂

‘Be careful how you cut your straps, so that they don’t turn out as Nesa’s hand’, by the way, Nesa is my husband, in case someone didn’t know.

I never actually noticed Nesa had a huge hand 🙂 but okay, I might be too subjective 🙂

Overall, the dough and the straps shouldn’t be the size of my little finger or Nesa’s hand 🙂

So as not to be confused: 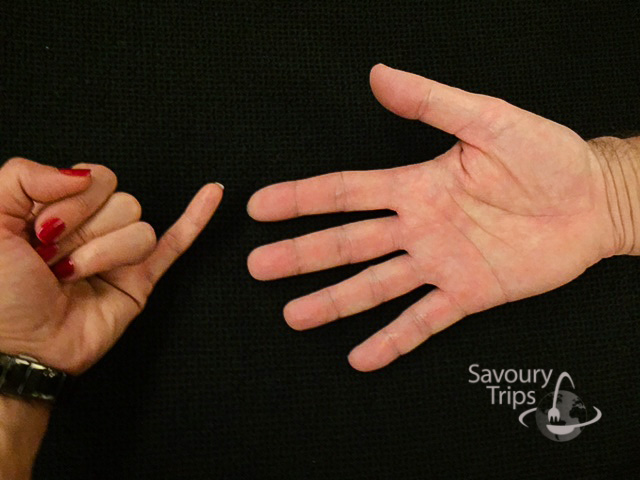 Mine little finger and Nesa’s hand

If you managed to complete every step so far, then fill the dough by the original recipe, using apricot jam… In case you don’t have any apricot jam at home, or no jam whatsoever, you can always use Nutella… but those are not the original homemade lard puff pastry wraps descending from Balkan.

When you added jam, roll or cover the dough so that the jam is on the inside… place them on the baking paper and on the tinplate. Leave it in the oven at 200°C until they get color.

After 20 minutes of baking, start checking their progress.

Once they are baked… Cover them with mixture of powder and vanilla sugar, and serve.

I wouldn’t add anything else, apart from saying you should enjoy every bite.

Don’t they look marvelous? I have to have one 🙂

I would like to inform my mom that I am going to crave some homemade lard puff pastry wraps again, at the very beginning of December 🙂 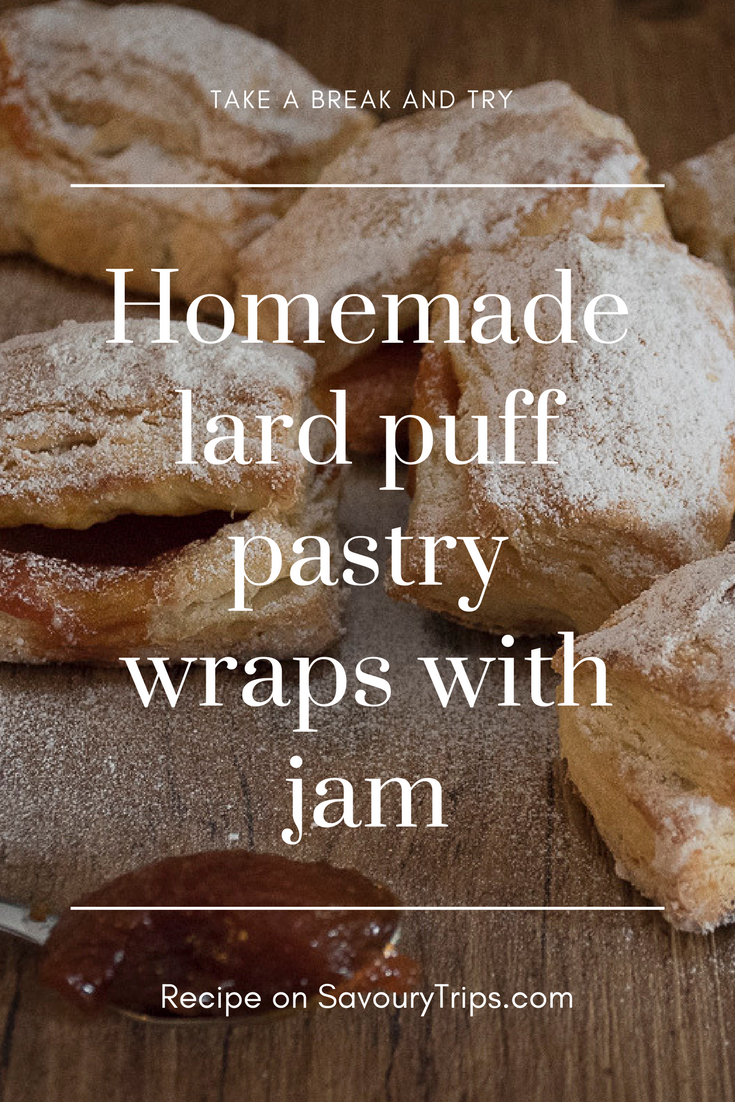 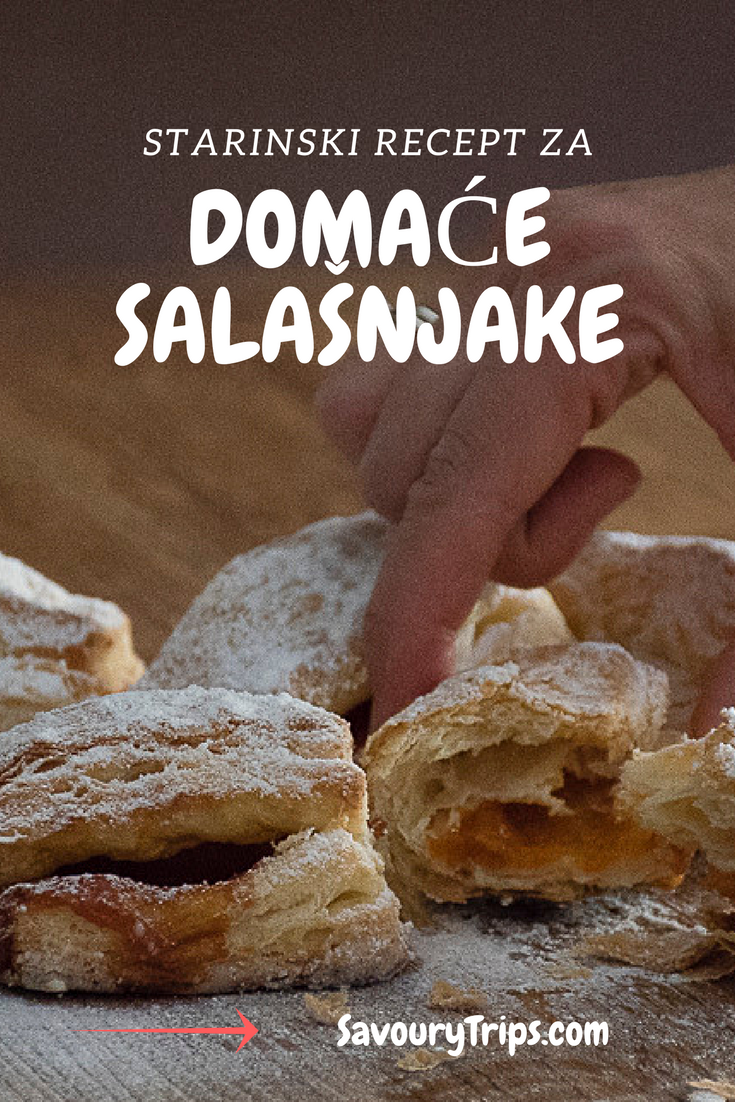