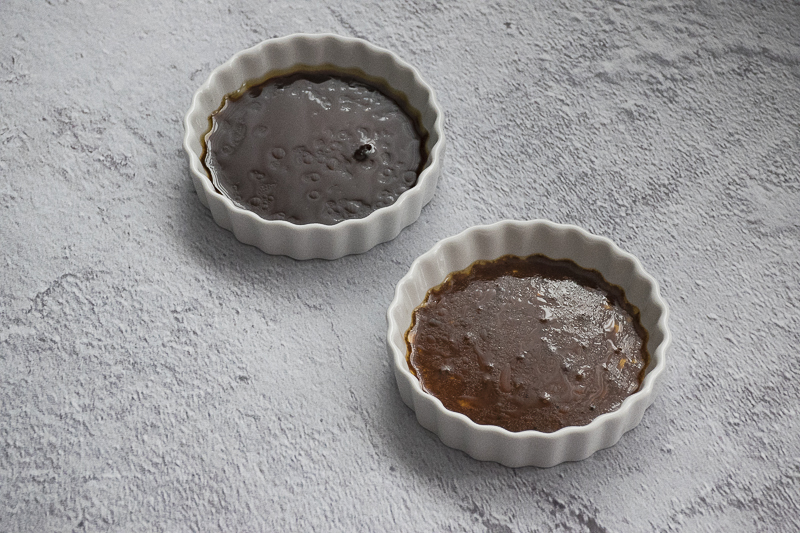 How to make a gravy – a thick meat and bone sauce?

What is a gravy?

Gravy is a thick, sticky sauce made out of meat, bones and vegetables in a longer cooking process but without adding flour. The final gelatinous mass is created from the process of reduction – the evaporation of excess.

What is gravy for?

I suggest you to use it as a diluted sauce for less popular pieces of meat, pie dressing, puff pastry filled with meat, vegetables and mashed potatoes. You can dilute it with wine, water, clear soup, cooking cream…tomatoes…mustard…and so on…and so on… 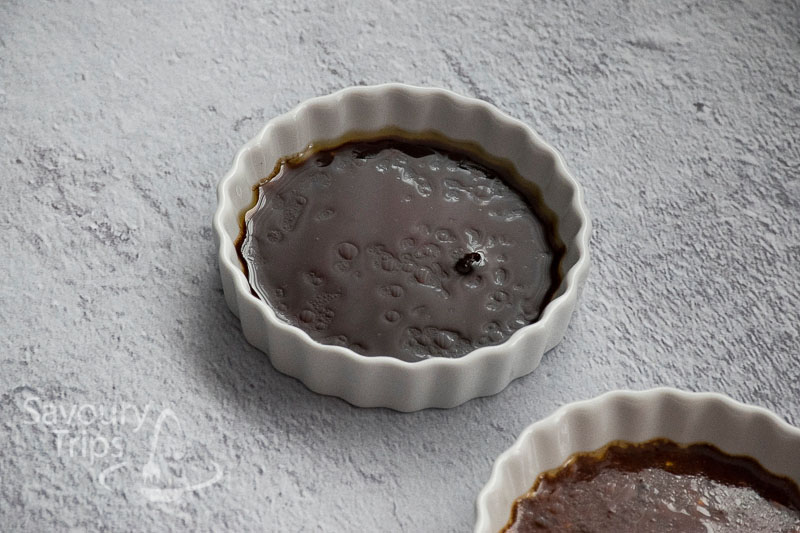 It is usually diluted with a clear unseasoned soup or cooking cream.

Some of the ideas on how to make the gravy is to put a teaspoon of higher concentration gravy into a bechamel sauce or velouté sauce and stir well.

What do you need to make a gravy?

Good will, meat with bones, a bit of butter and vegetables. 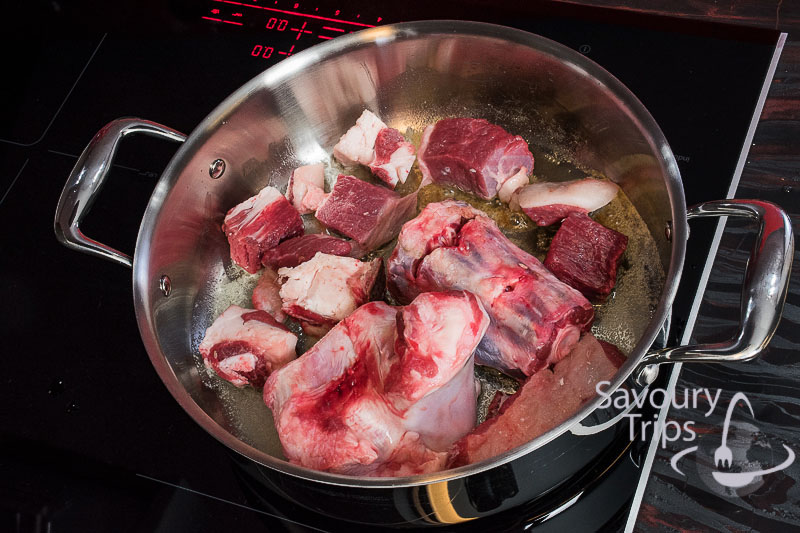 I put bones and meat on a bit of butter and did NOT stir until the meat got browned.

How much does the sauce last?

It depends on how often you use it, and how much meat, vegetables and bones you put in. The quantity we will get with this recipe is enough for at least 4 uses of a family of four. To make one gravy sauce (a diluted gravy) you need one teaspoon of a concentrated gravy.

How to pick meat, vegetables and spices?

There are several types of gravies – beef, veal, chicken (poultry), pork and fish…or the one made out of vegetables only. Generally, gravy is made from one of these types of meat and vegetables or only from vegetables. Depending on the dish you are preparing, you should use a specific gravy. Obviously, you will not use a beef gravy if you need a sauce for fish 🙂

When choosing ingredients my suggestion is to pick less popular pieces of meat, that is, the stringier meat which you will usually not roast as a steak. You shouldn’t remove the bones in any case because they give aroma and taste, so just break them with a meat chopper (or let your butcher do it for you). If you are using fish, keep the head, backbone, skin…

You can combine the vegetables to your taste. Most often onion, garlic, celery stalks and carrot are used…you can add tomato, leek, white carrot… 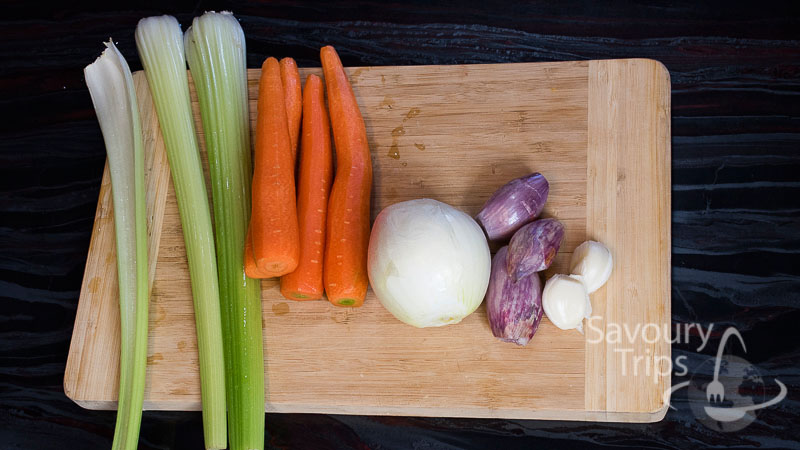 This was my choice of vegetables this time. I added thyme leaves directly into the pot.

Spices…if you are making a mild version than you shouldn’t even season it that much. You can put a few thyme leaves, red or white wine during preparation…also mustard or reduced balsamic vinegar…But what’s important is that you should put salt and pepper once it’s all over because only then can you decide whether you should intensify the taste or not.

Concentrated gravy without any additional salt is very strong and salty so it’s best to season at the end.

What’s the most important thing for gravy?

Do not stir meat and bones as well as vegetables while they are stewing until they are browned on one side. There must be some of that stuck on the bottom of the pot.

How to make a gravy sauce?

First you should melt the butter, then add chopped meat (size of the pieces is not important here) and bones. Stew at medium temperature until brown on one side. Then turn the meat to the other side so that it browns as well. A bit of meat along with fat should stick to the bottom of the pot, just like in the picture below… 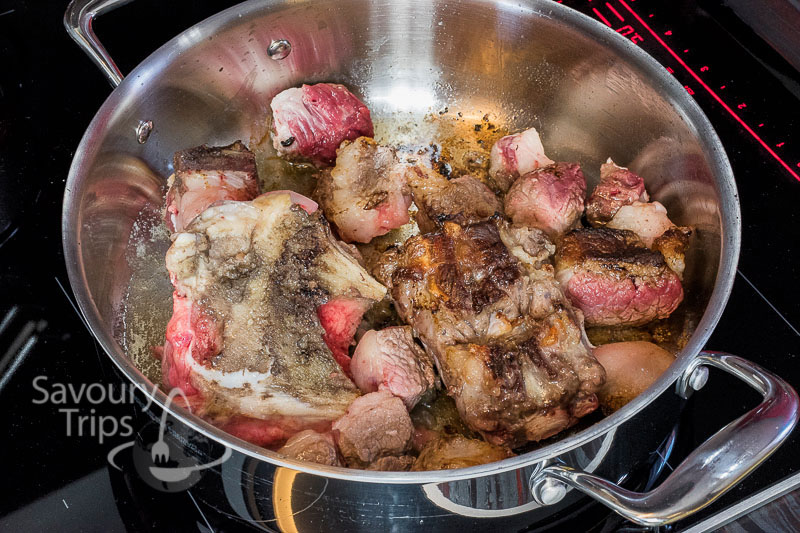 Once the meat is brown on both sides, take it out of the pot and leave it aside until the vegetables are browned.

You can cut vegetables in larger pieces. 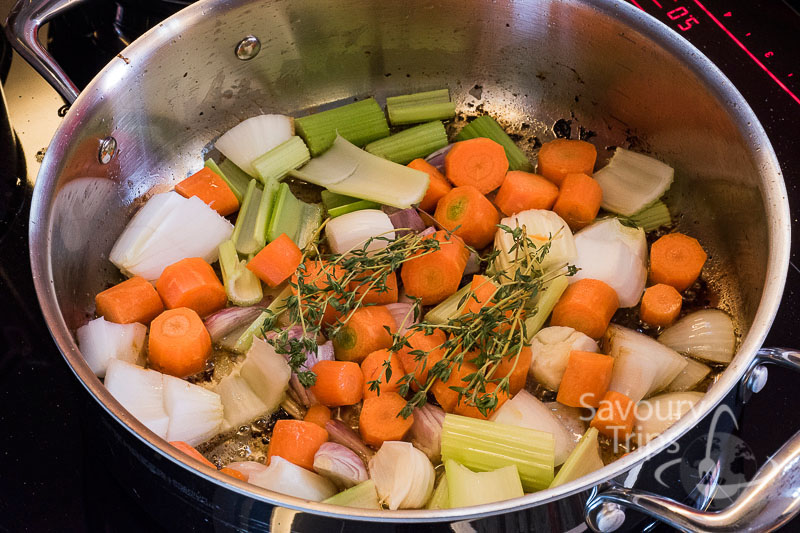 Once the vegetables are browned, put the bones and meat back into the same pot. 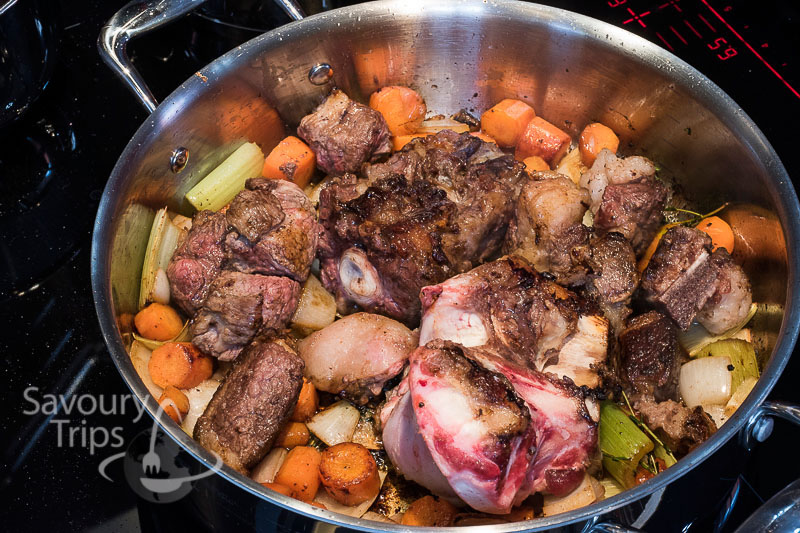 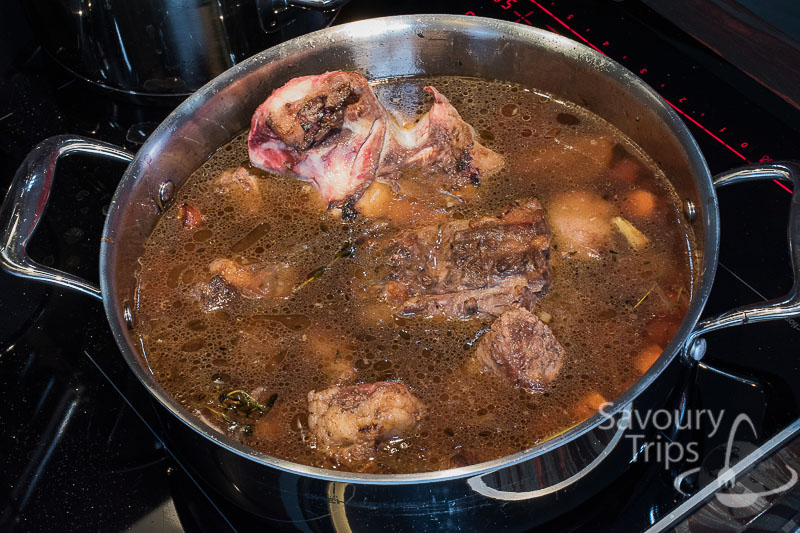 Stew together for some time, then pour the water over so that it all sinks in. Cover it and leave to cook for at least 1 hour (otherwise it’s better to cook for 2-3 hours on light fire).

After 1 hour strain everything… 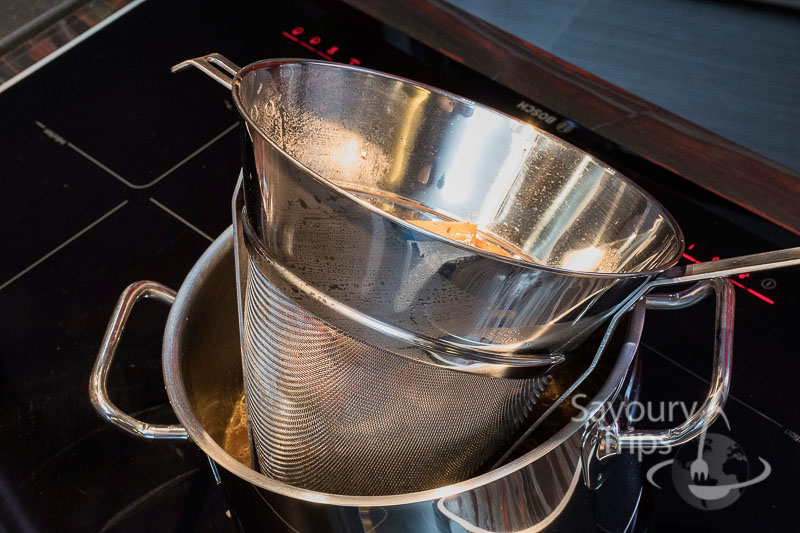 This is what my stainer looks like…By the way, I brought it from France. These are the ones we used in a professional kitchen. The advantage of this strainer is that it is pointy, so when you squash the content you can use a wooden screw or a smaller ladle and therefore, crush the soul out of what’s in there 🙂 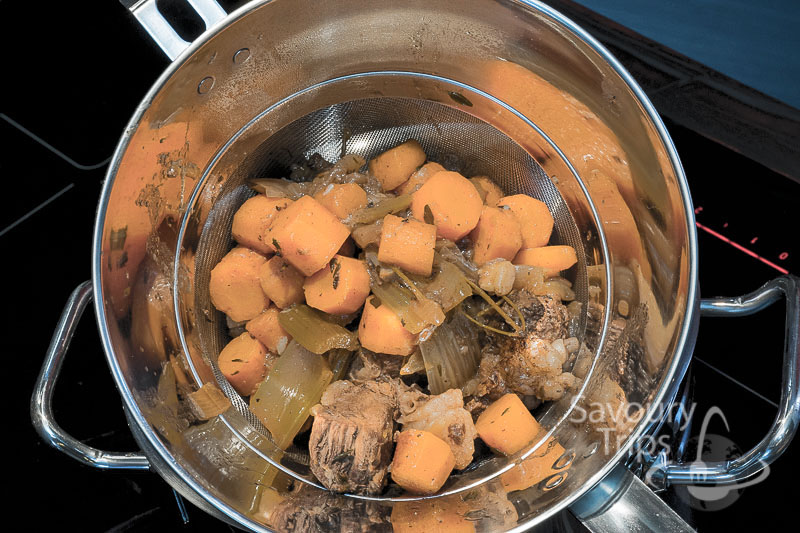 The liquid is in the pot, and this is meat and vegetables that need to be crushed well through the strainer (I threw away big bones in this step). In the end, you can throw away what’s left in the strainer.

The second phase in sauce making

Once everything is strained you get this as the start of the sauce. 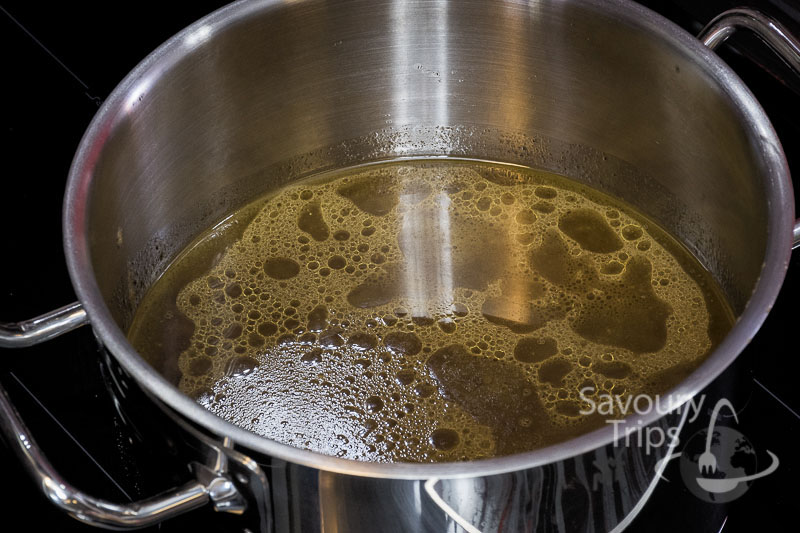 A lot of the liquid will reduce. Now we continue with cooking…With long cooking at medium temperature with occasional stirring and taking he sticky mass off the edges of the pot you get a thick mass like in the picture 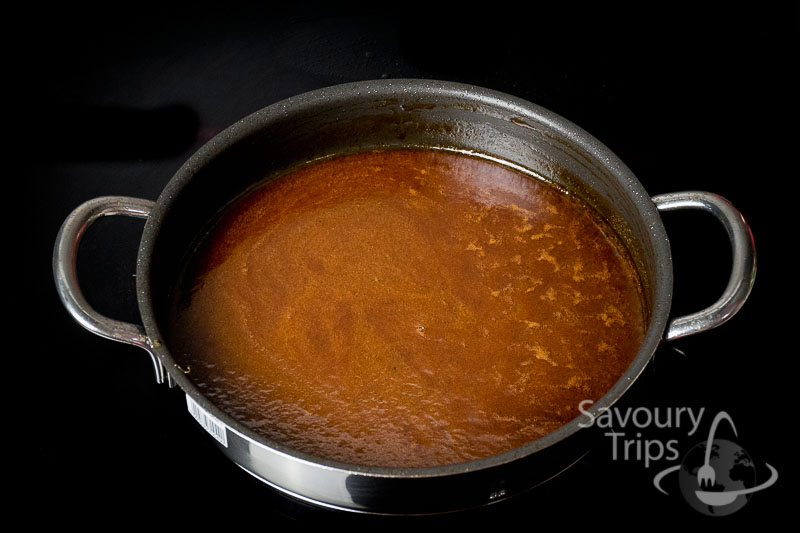 You can, of course, reduce it even more with additional cooking, but considering the purpose of the sauce, there might not be the need for that.

Put the finished sauce – gravy into a separate dish and put it in the fridge. Over time, it will completely cool down and tighten like gelatin. 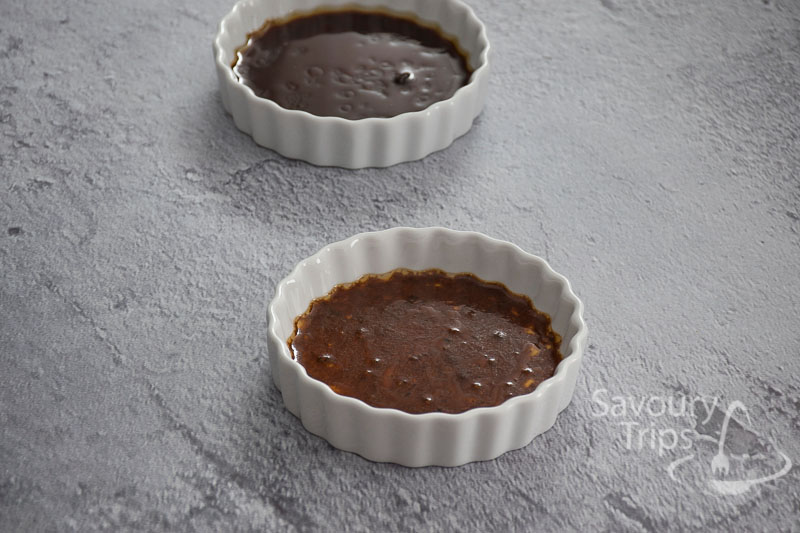 Two types of gravy – one undiluted, darker and the other one ready to use.

And don’t forget, this is like an ace in the hole for everything you want to prepare…With this sauce, every piece of meat and vegetables will be top-notch 🙂