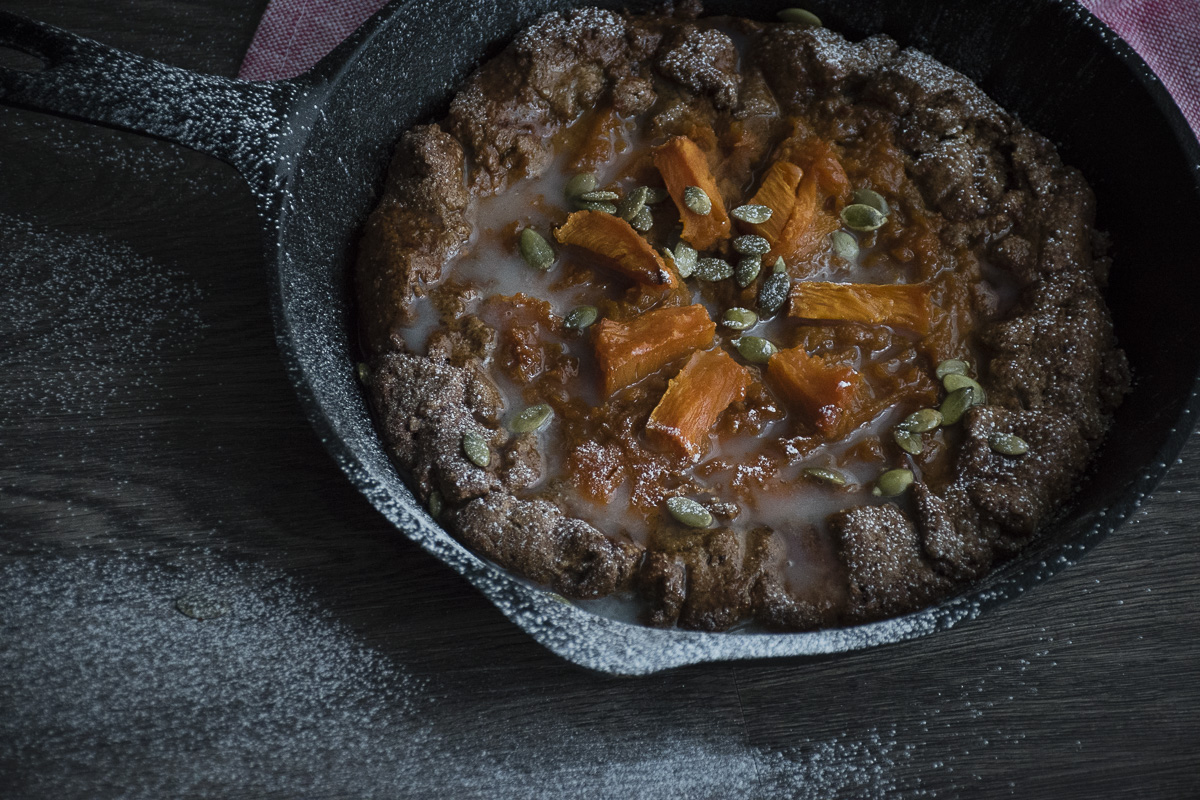 7 things you should remember when making French pumpkin galettes

You have probably been hundred times in a situation like me, where you had an ingredient but did not know how to use it. Or you have already tried all your recipes many times and now want something new.

To make things worse, while searching for recipes, I’ve been burnt too many times… the photo did not match the result. Or I just followed the recipe too literally from fear of an unsuccessful cake or dish.

But in the end, it’s worth the effort. And that’s how I got to this French galette recipe. I tried, analyzed, felt down cause something was not going right, and then modified, modified and modified until I got this fantastic flavour. Pumpkin galettes crispy and juicy at the same time. 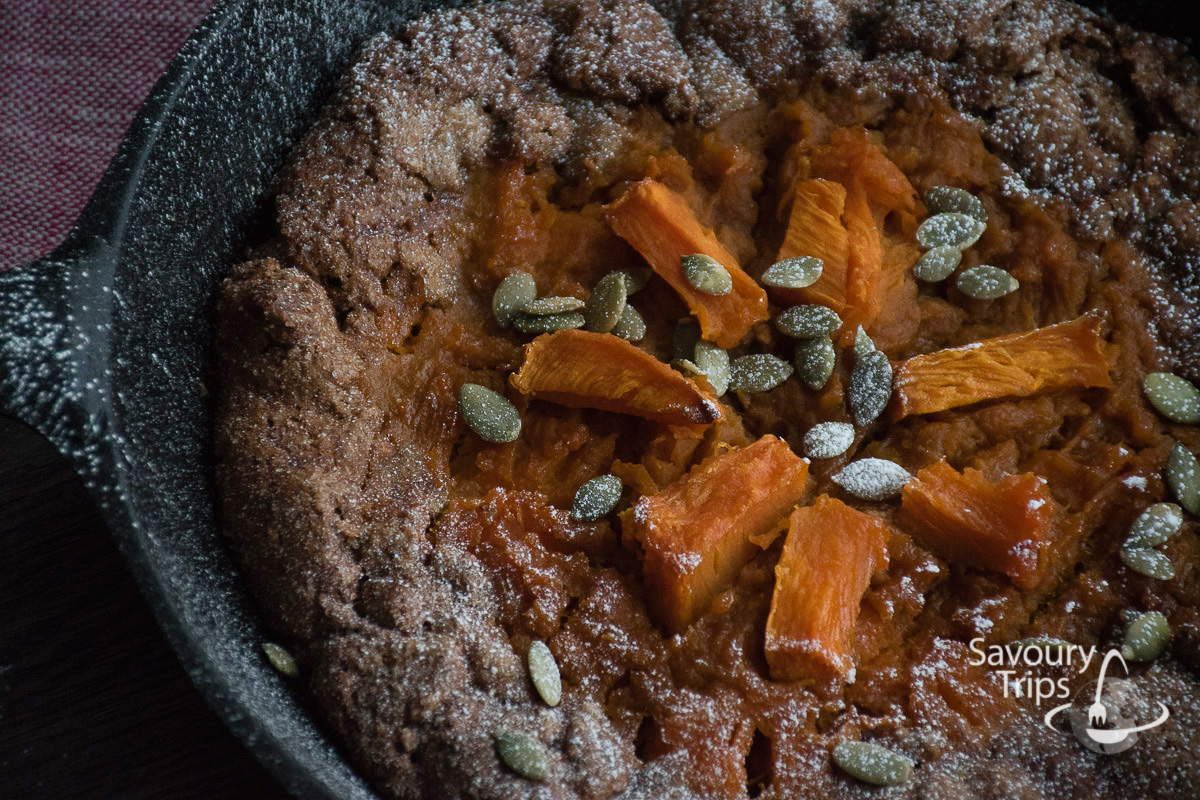 Pumpkin galettes and how I made them

You can find the exact measures of everything step by step in the recipe at the bottom of the page.

The rest depends on one’s taste 🙂

Right at the beginning

Don’t forget to turn on the oven to heat up at 170°C while you are preparing the pumpkin galettes.

How did I knead the crust?

I mixed the spelt and buckwheat (you can use both white and blakwheat, or just white…), that’s why it turned out so dark and rustic. For the aroma, I used vanilla (vanilla flavour), cinnamon, brown sugar (you can also use honey) and a little bit of salt.

So I mixed together all the ingredients, added a bit of water and cold butter and kneaded with my hands.

I tried to knead with a mixer, but it’s better if you do it with your hands…and faster believe it or not…cause the butter mixes in better under the body temperature, that is, finger temperature than under inox or mixer beaters 🙂

I kneaded, kneaded and kneaded until I got a smooth dough. 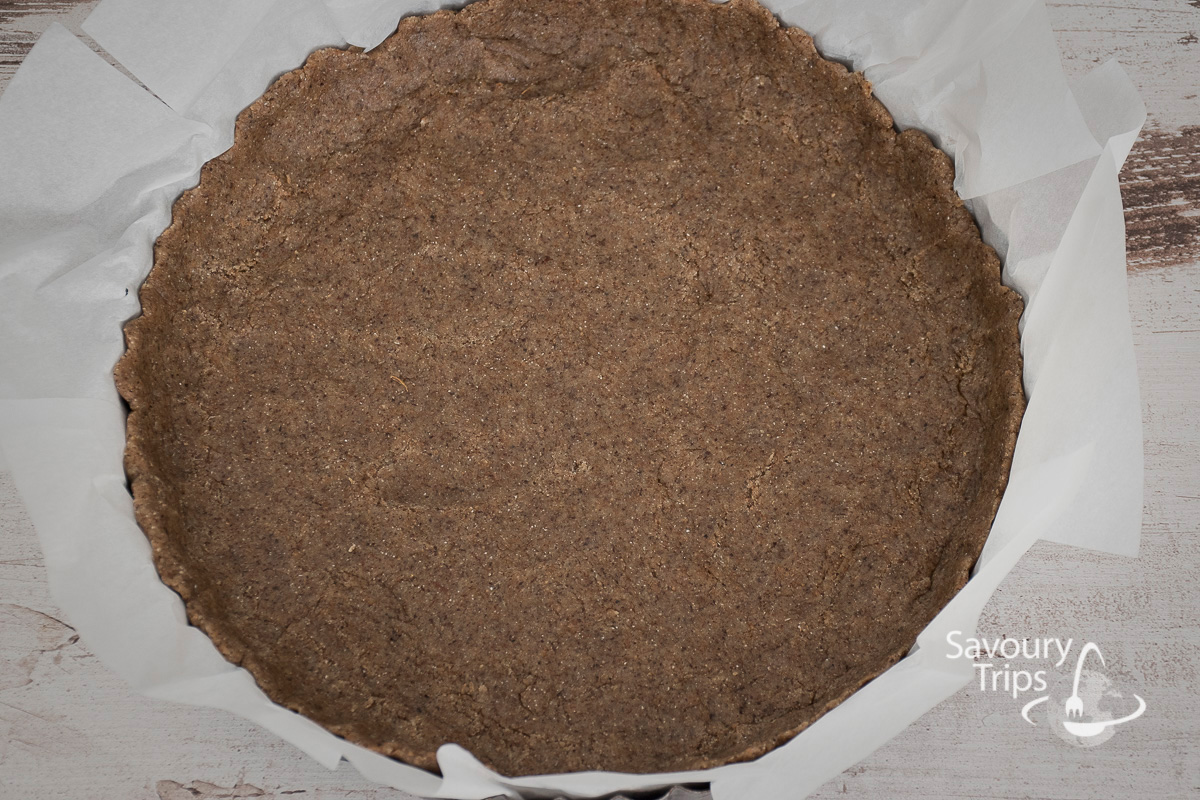 IMPORTANT STEP: Even though it seems as if the dough is falling apart, be persistent and knead…in the end you will get a smooth dough because the added water will do its job. If you think you need more water for some reason, add only a few drops…cause you will not be needing more for sure. Knead and be persistent about 10-13 minutes.

Then I wrapped the dough into a transparent foil and left it in the fridge for about 30-40 minutes.

In the meantime I went onto another important thing…

Making an ideal combination of flavours for the filling

My ideal combination was pumpkin puree, honey, and cinnamon.

First I cut the pumpkin in equal pieces and baked them in the oven at 150°C for about 30-40 minutes. Every oven is different, but when 25 minutes pass start checking on your pumpkin. It’s done when you can easily mash it with a fork.

I mixed honey and cinnamon in a separate bowl and added pumpkin, and then starch and mashed it all together with a fork.

Love rustic things, so I left a few pieces of pumpkin…I didn’t make the actual puree.

How to put it all together in a cast-iron skillet? 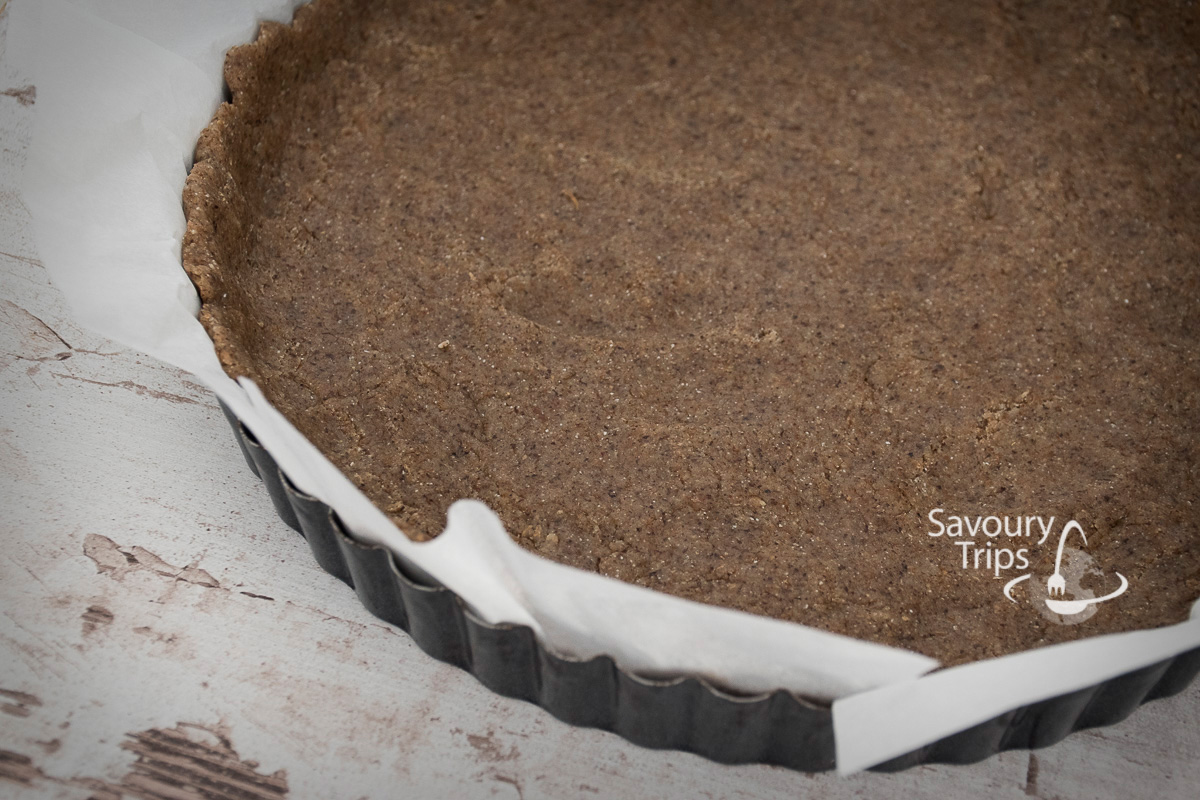 But I concluded that you can stretch it a little bit with a rolling pin and then finish it using your hands in the baking pan.

I baked the galette in the cast-iron skillet.

Then move the dough for galettes – crust – into the cast-iron skillet (or any other baking pan).

In the central part put the honey, cinnamon and pumpkin puree mixture, then put the rest of the crust over the mixture, so that it sticks out a bit as well.  That’s how you get pumpkin galettes, unbaked though. 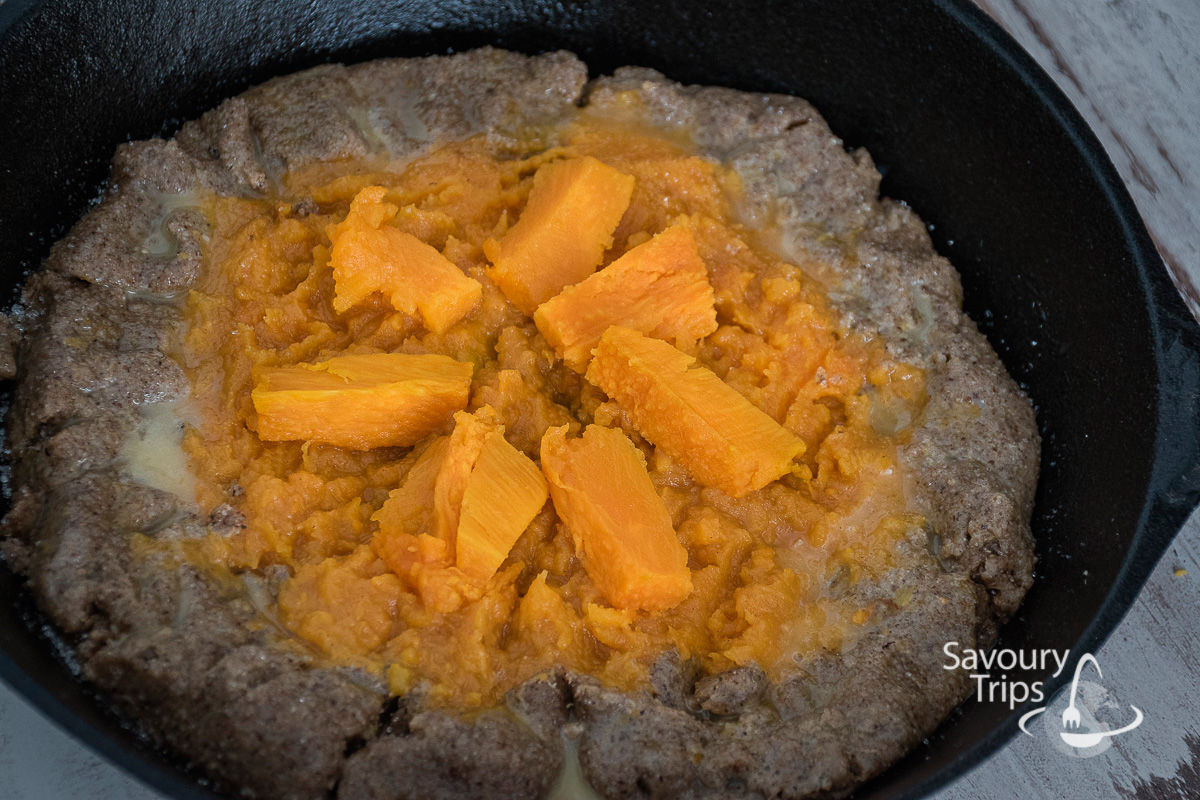 Then, I whisked the egg with a fork and added a bit of water and put the mixture over the edges of the galette…and then I sprinkled them with sugar…you can either use white or brown…it doesn’t matter.

I put it in the oven and baked for about 40-45 minutes. Start checking on it after 30 minutes. 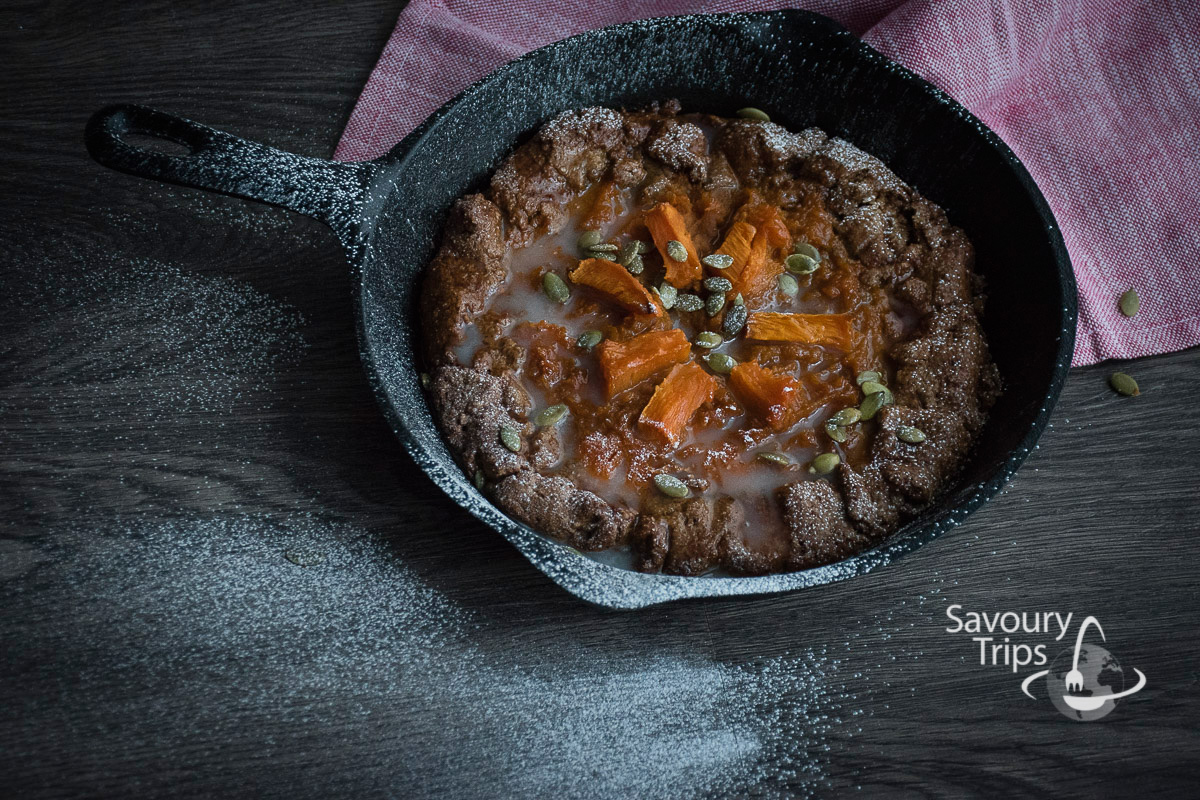 But while the pumpkin galette is baking…don’t forget…

To prepare the glaze

I made the glaze out of powdered sugar, almond milk (you can also use regular milk) and vanilla once again.

I mixed it all together with a fork.

Once the pumpkin galette was baked, I took it out of the oven and left it to cool down.

Pour the glaze over it

So, leave the pumpkin galette to cool down a bit, but not to cool entirely…and while still lukewarm pour the glaze over it…You should have enough glaze to cover the entire pumpkin galette so that the crust absorbs everything. That’s how it becomes juicy…while the crispiness you get by baking and the combination of flours:) 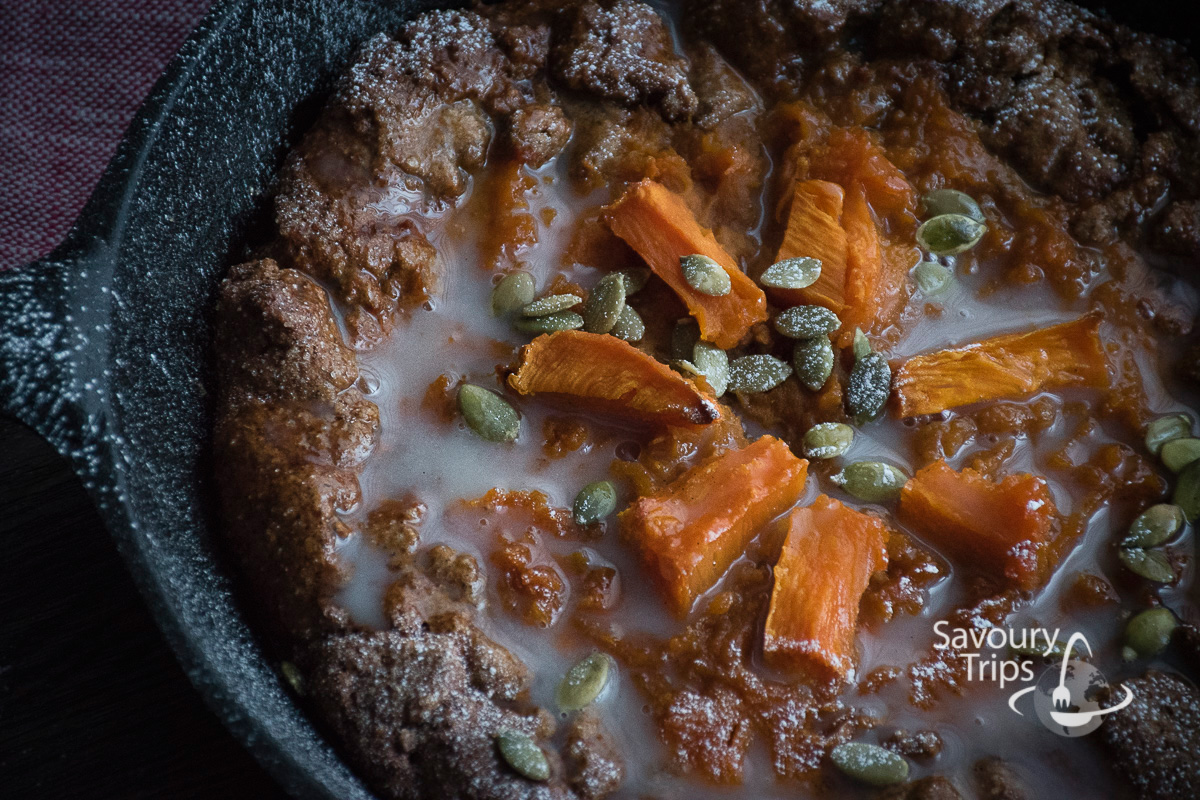 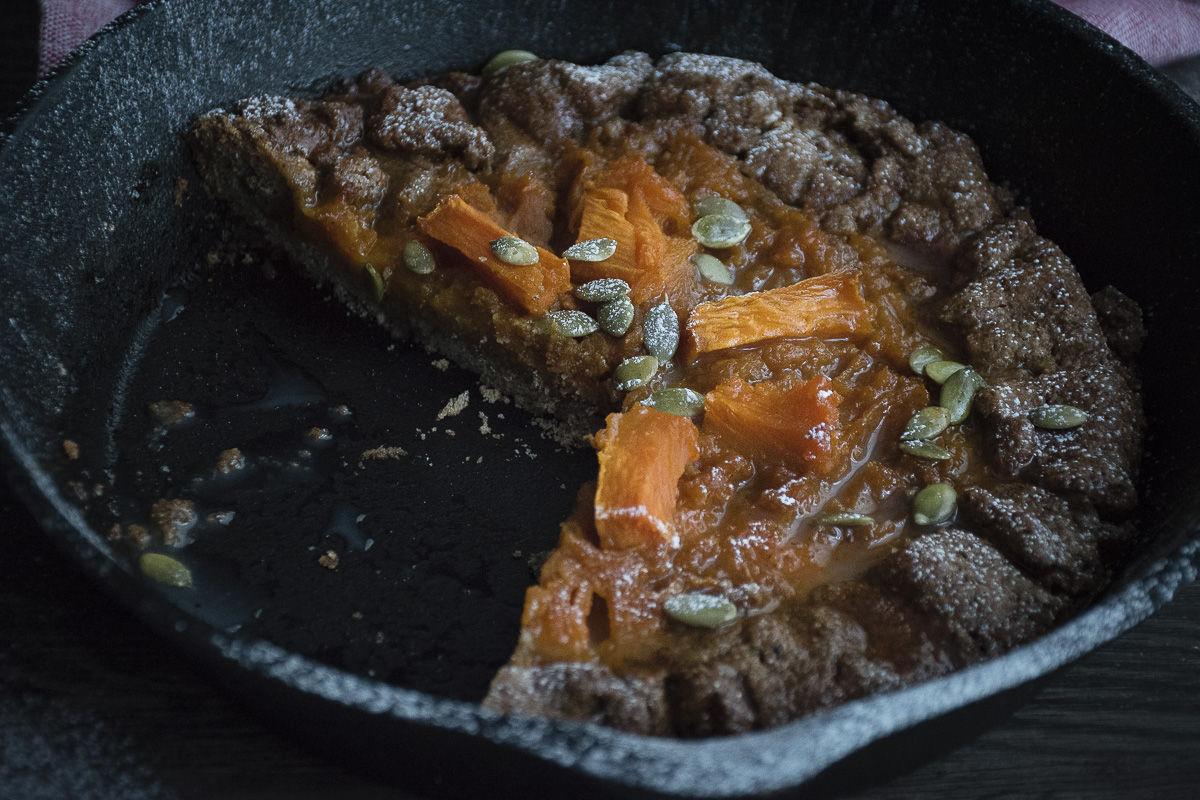 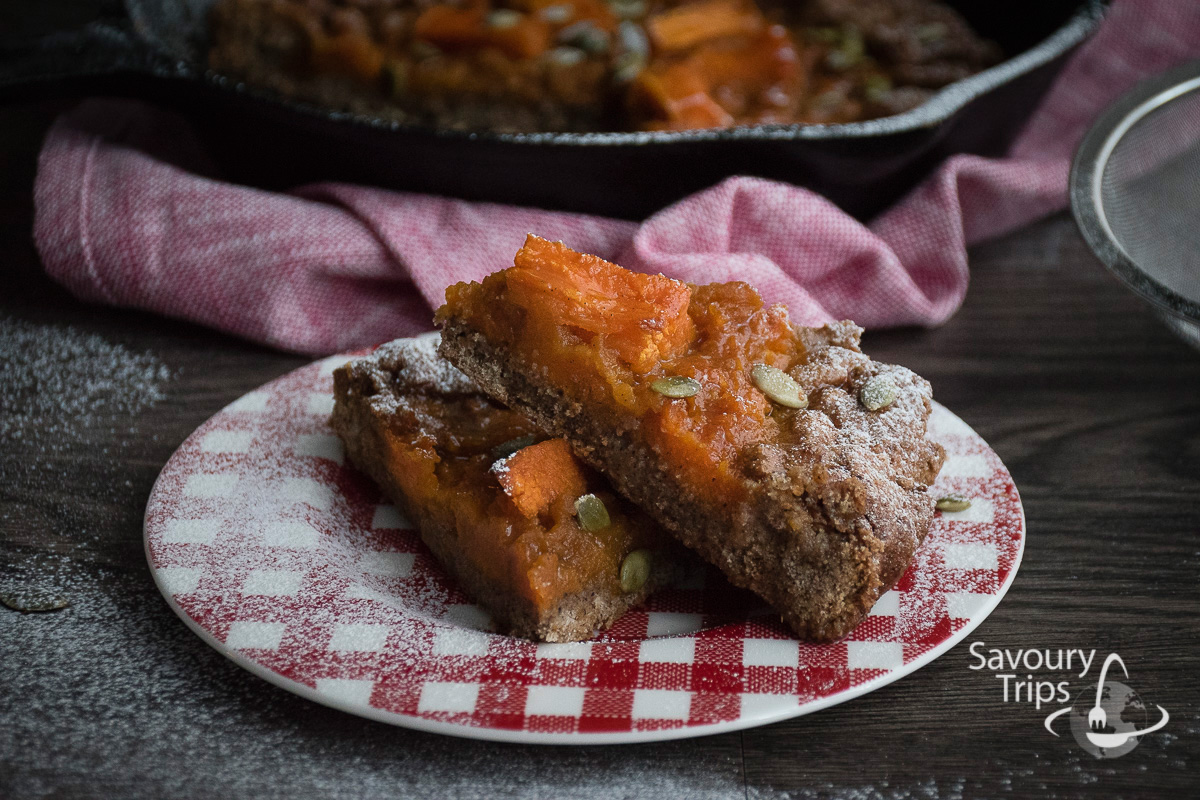 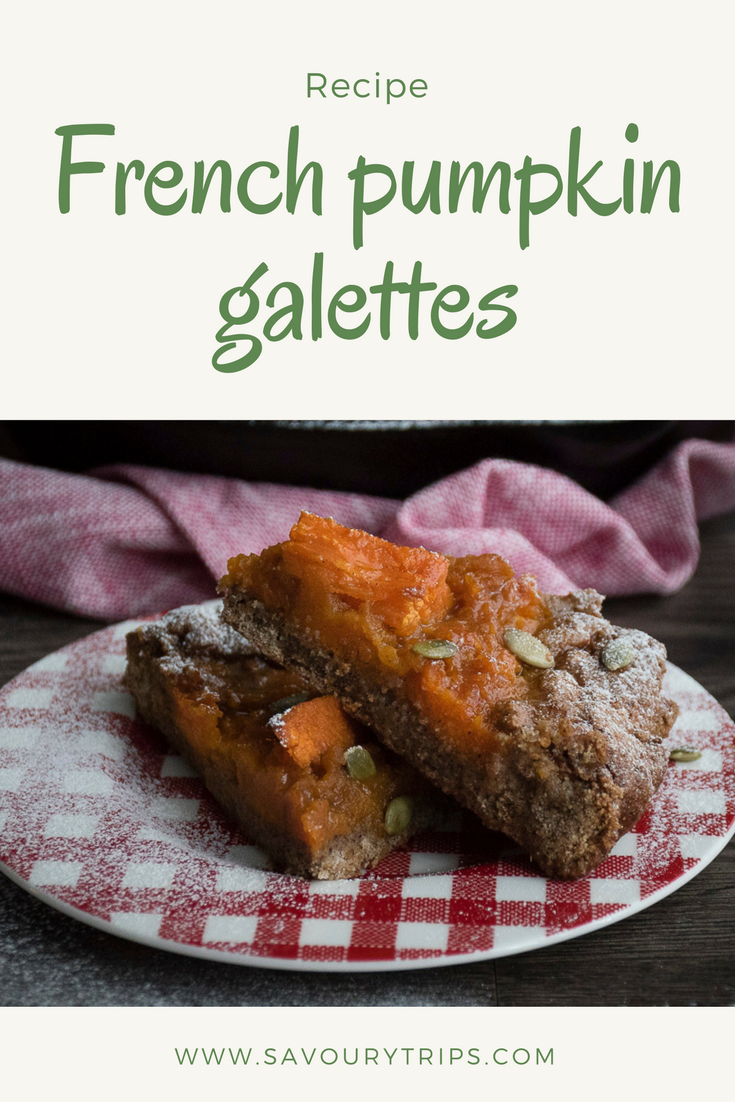 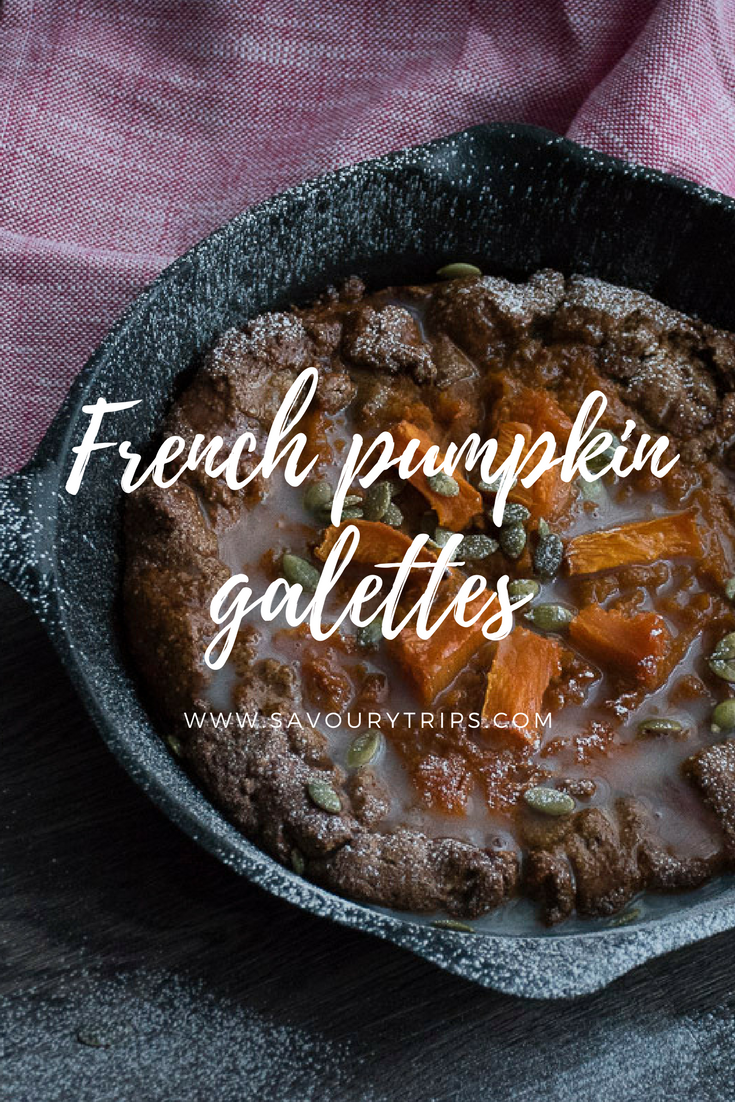