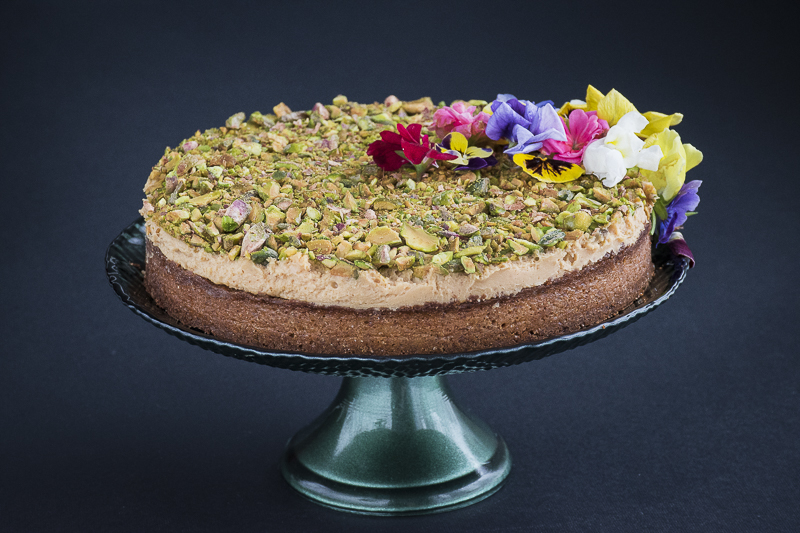 This is one quick and easy creme caramel cake with pistachios from Brittany in France. Brittany is a region in the northwestern part of France facing the Atlantic ocean, and the main city is Nantes.

That would be it 🙂

As for the recipe, it’s a slightly modified version of the original by Christophe Adam.

I will try to present you with all the amazing people whose work captivated me during all of my French travels. They became my role models. 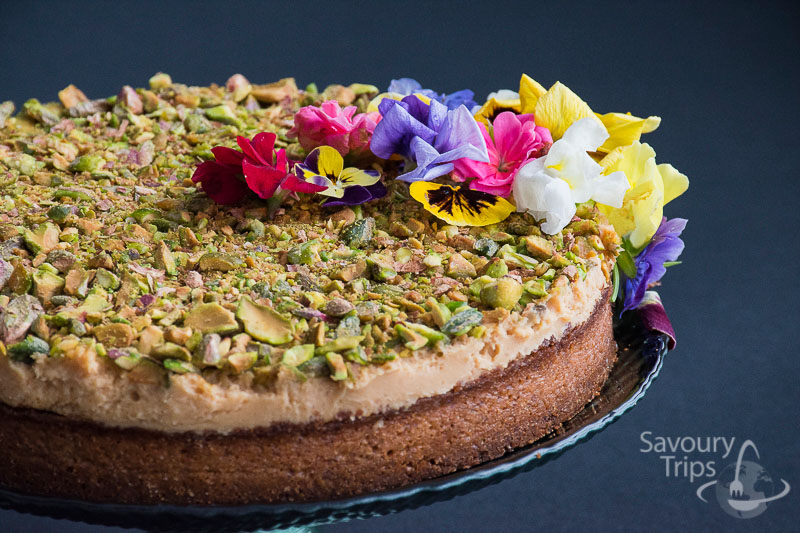 Biscuit-type crust. The French name for this crust is Pâte Sablée. In a free translation, it is a sandy crust. You get the “sand” when mixing butter at room temperature (very soft) by hand into eggs, sugar, and then all of it into flour and yeast. Pâte Sablée is actually a typical French tart crust.

Then, I used creme caramel with a salty touch as a filling.

And the icing on the cake are crushed pistachios.

You can certainly combine some seasonal fruit with the pistachios.

How to make Pâte Sablée?

You don’t need a blender for Pâte Sablée – only a silicone spatula. First, I mixed eggs and sugar with a little bit of salt and blended them all well with a spatula.  Then I added butter, which was at room temperature for quite some time, to the mixture. So, it’s very soft, but not liquid.

I mixed two types of flour in a special bowl. White wheat flour and integral wheat flour – this is what’s special about this quick Brittany cake. I added dry yeast to the flour mixture as well. Then, I united it with the previous egg, sugar and butter mixture with a spatula. I homogenized the new mixture, again only with a spatula, and added grated orange zest.

I covered it with a transparent foil and left it in the fridge for 1 hour to rest.

After an hour, I took it out of the fridge and stretched the dough out with a rolling pin between two baking papers.

I put the crust into a round inox mould of a 20 cm diameter. The thickness of the crust was 3-4 cm.

I did not stretch the crust like I would do for a tart, on the edges of the mould, but if you prefer it like that – go for it. I opted for a quick layered cake.

How to make creme caramel?

Ugh 🙂 My favourite part. By the way, the first time I tried caramel cream was in France. Before that, I somehow did not consider it a ‘must try.’ Over there, they eat it like crazy. They make it very often and even pour it over crêpes.

So, you can use this caramel cream recipe for crêpes, too. Even the crêpes are not the same with it 🙂 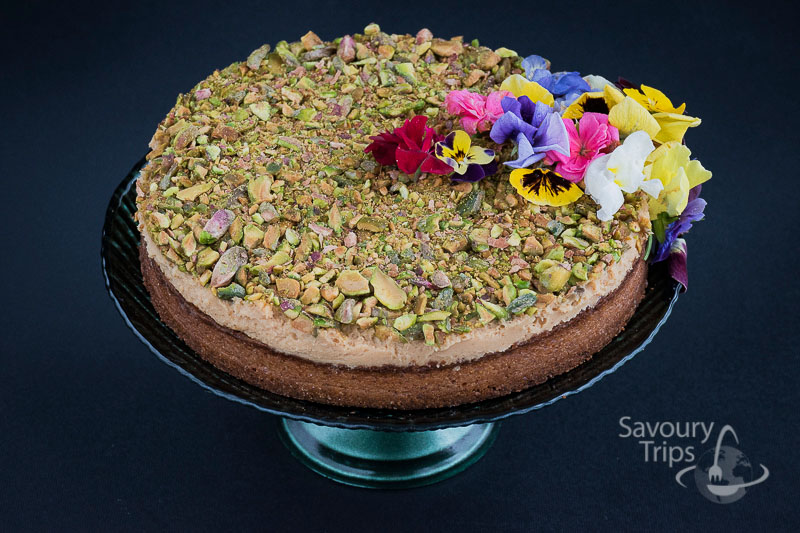 For caramel cream, I needed sugar, butter (what would the French do without butter 🙂 ), cooking cream, or even better, condensed milk (but unsweetened) – it would be best if you can find it with 35% of fat. Then, you need a little bit of powdered gelatin and mascarpone cheese.

First, I made caramel out of sugar. So, I poured sugar into a pot and gradually warmed it up at medium temperature. Be careful not to let it burn because you will not be able to get rid of the bitter taste later.

Then, I took it off the burner and mixed in butter and coarse sea salt.

I mixed condensed milk and powdered gelatin in a separate bowl and left it aside for 5 minutes. After that, I put that pot on the burner to warm it up as well, and then gradually united caramel and warm condensed milk.

Once I got a homogeneous mixture, I left it aside for a bit at room temperature.

How did I mix mascarpone with creme caramel?

Pay attention to this part, so that the caramel cream is cold enough to mix in with mascarpone cheese.

I poured mascarpone cheese into a separate bowl and added a bit of caramel cream to make the initial mixture. Then, I gradually added, one by one, a spoon of creme caramel to it.

At the end, I united this now slightly warmer mixture with the rest of the creme caramel. I mixed it all well so that there were no lumps.

Crust baking in the oven

I baked this quick cake Brittany crust at  160°C,  for about 20-30 minutes. It’s important to constantly check the crust in the oven because everyone’s oven is different.

Once the crust is baked, take it out of the oven and cover it with acetate foil (for those who are making a quick layered cake). For those who made the crust like the one for a tart, you don’t need anything.

On the crust (or in the crust), pour the salty caramel cream and sprinkle with pistachios or some seasonal fruit. 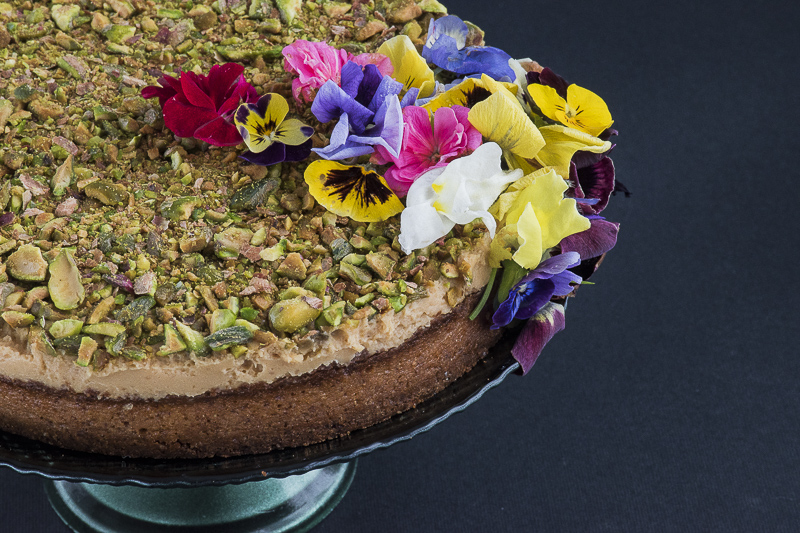 With the tart crust, you can cover the edges with crushed pistachios, and put fruit in the middle for a perfect combination 🙂

Let it breathe a little and then go for it 🙂 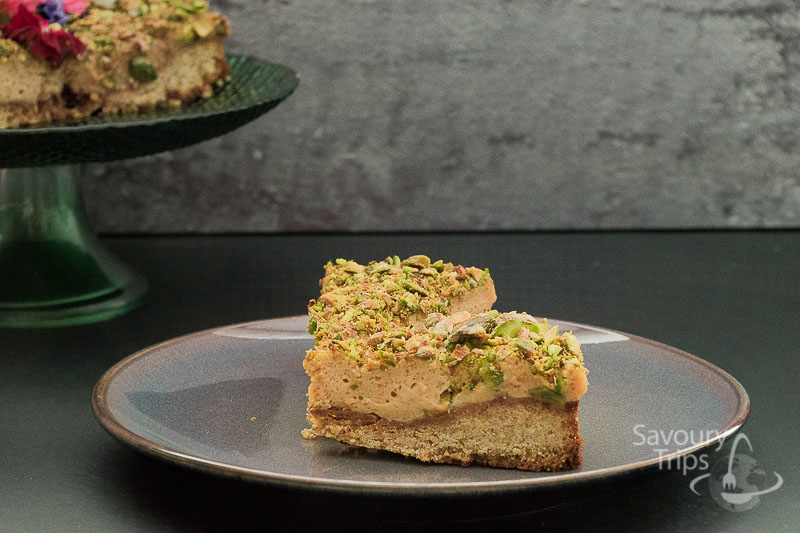 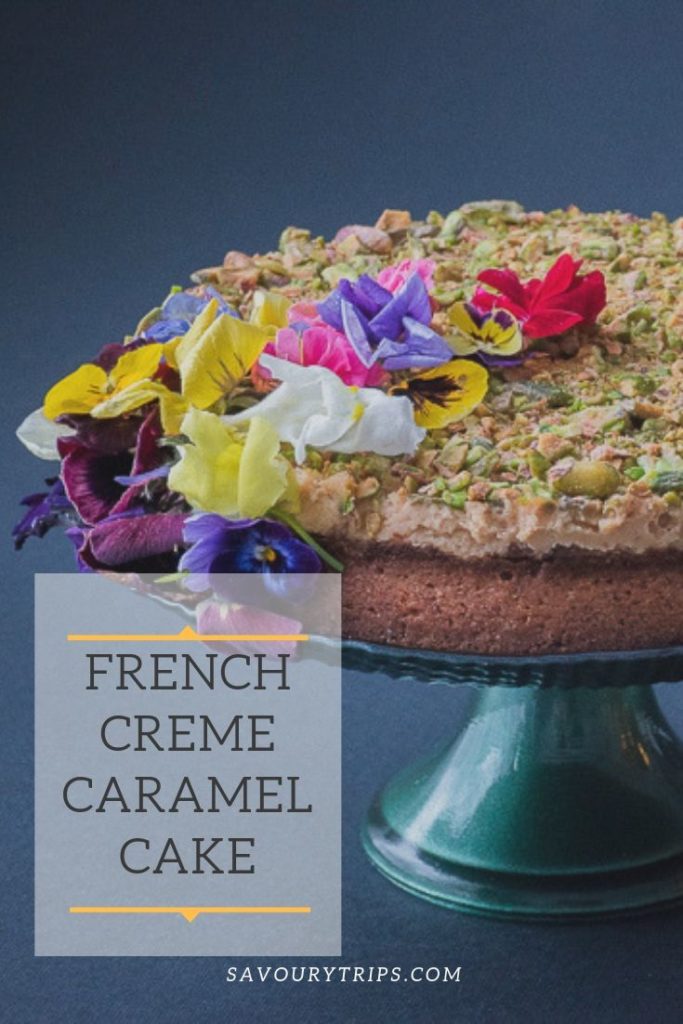 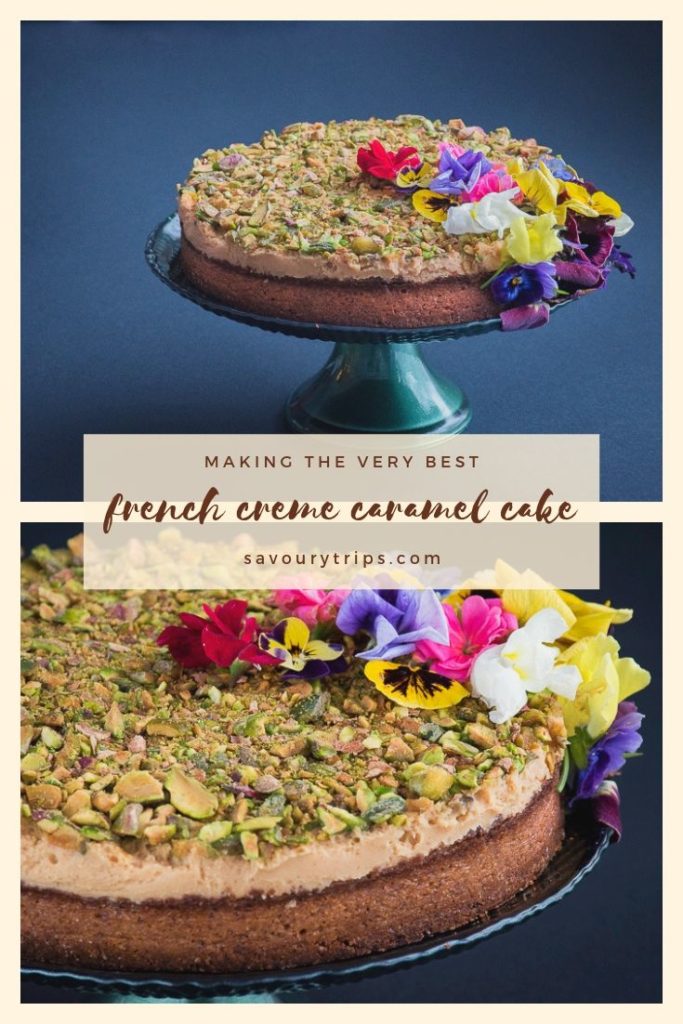