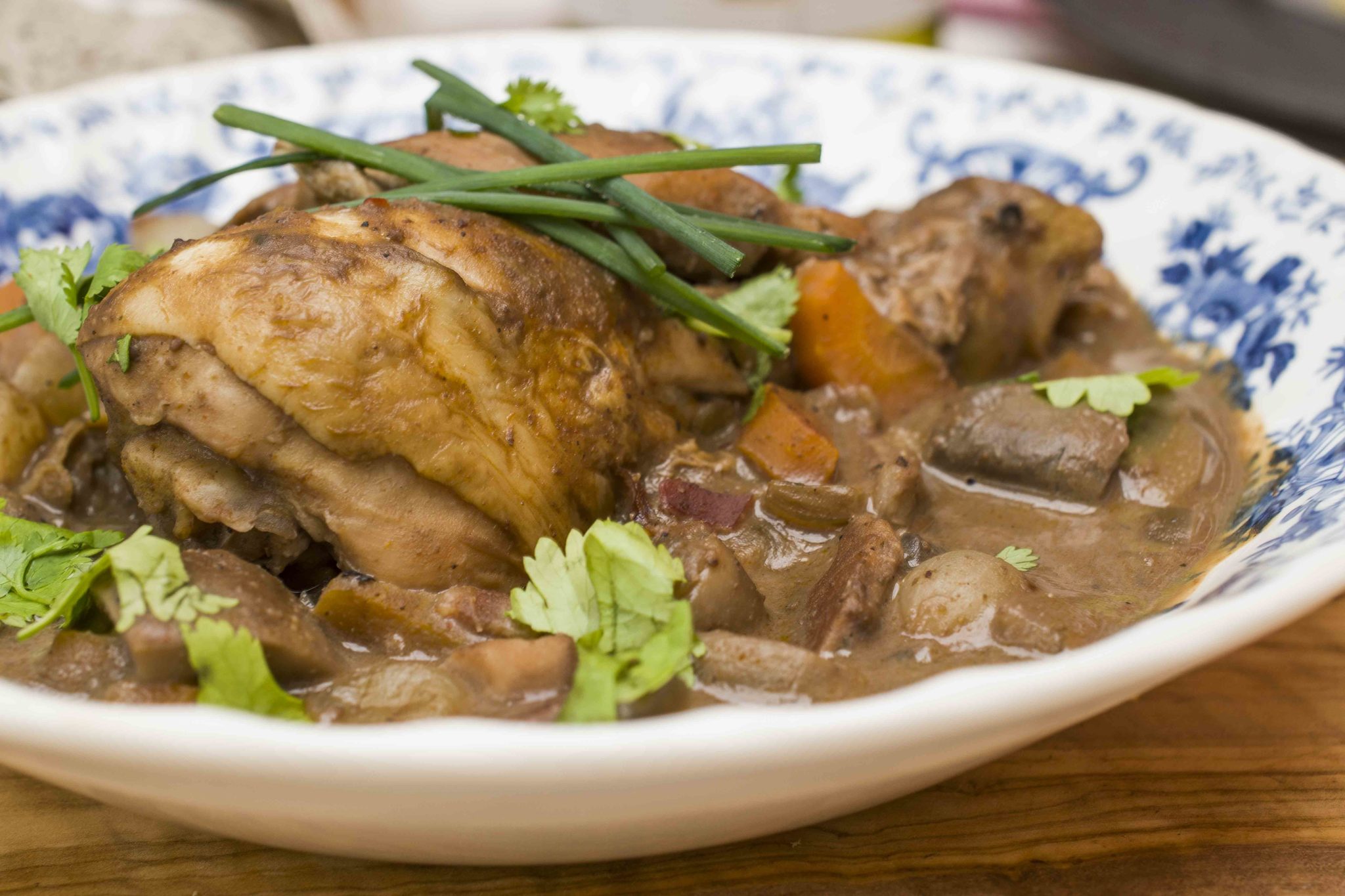 Two most famous French dishes are boef bourgignon and coq du vin, which means ‘chicken in wine’, and is otherwise classified as some sort of stew.

Both dishes start with sorting garlic and onion on butter. Afterwards, the meat fries, just enough to get the golden color, and then, everything finishes with slow cooking in wine. 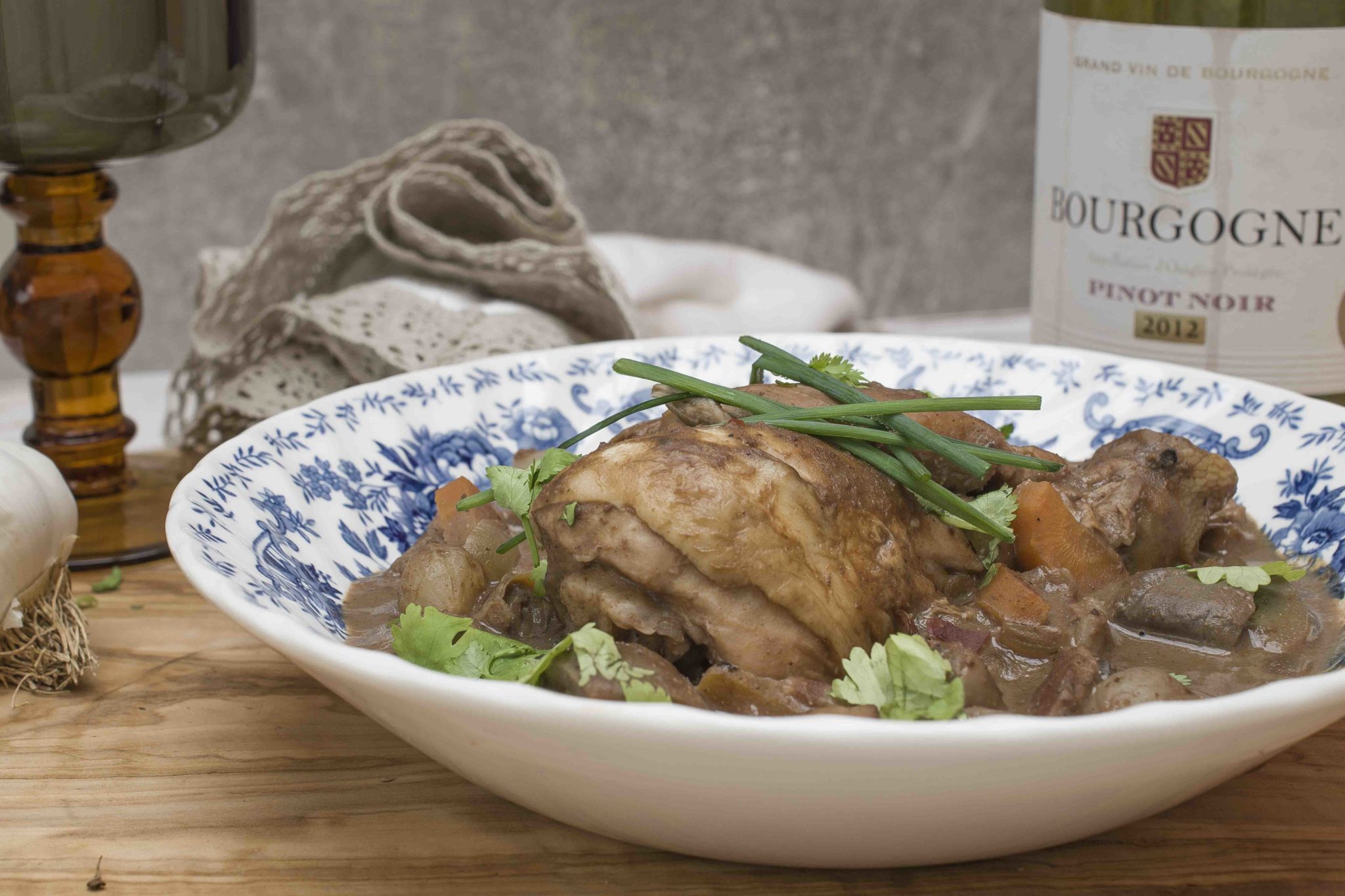 What is actually coq du vin?

History of this dish’s origin is based on legends. What is sure is that the first recipe of a similar dish appeared in the books for the first time some 150 years ago, and that the dish is first mentioned in the time of Gaius Julius Caesar. Of course, Napoleon was part of one of the legends.

According to that legend, Napoleon suddenly stopped in an inn while he was on his conquests. The host had nothing better to serve his at that moment, apart from the cooked rooster in wine, with onion, spices and vegetables. To his surprise, Napoleon loved the dish which was very tasty. After that, its recipe became a part of the traditional French cuisine.

Of course, the dish has evolved over the years, it changed, but the basis and the cooking technique remained the same. 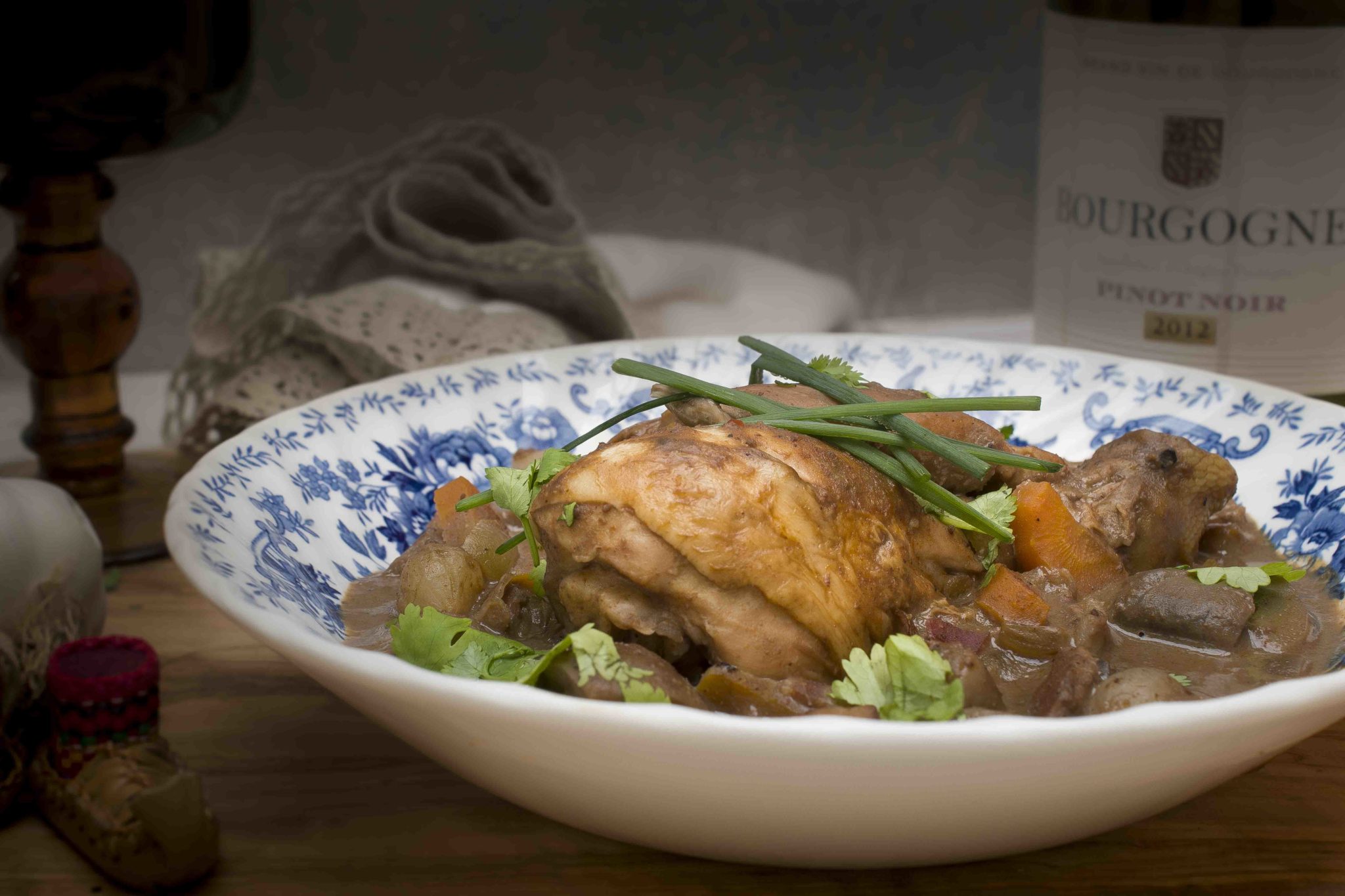 Coq– French word representing the rooster, not a young chicken but an adult rooster.

How was the dish created?

Just like the other traditional national meals, this one comes from the peasants who used to live in the rural parts of the country. Due to their poverty and fighting for survival, they came up with various dishes, and that is how coq du vin was created as well. 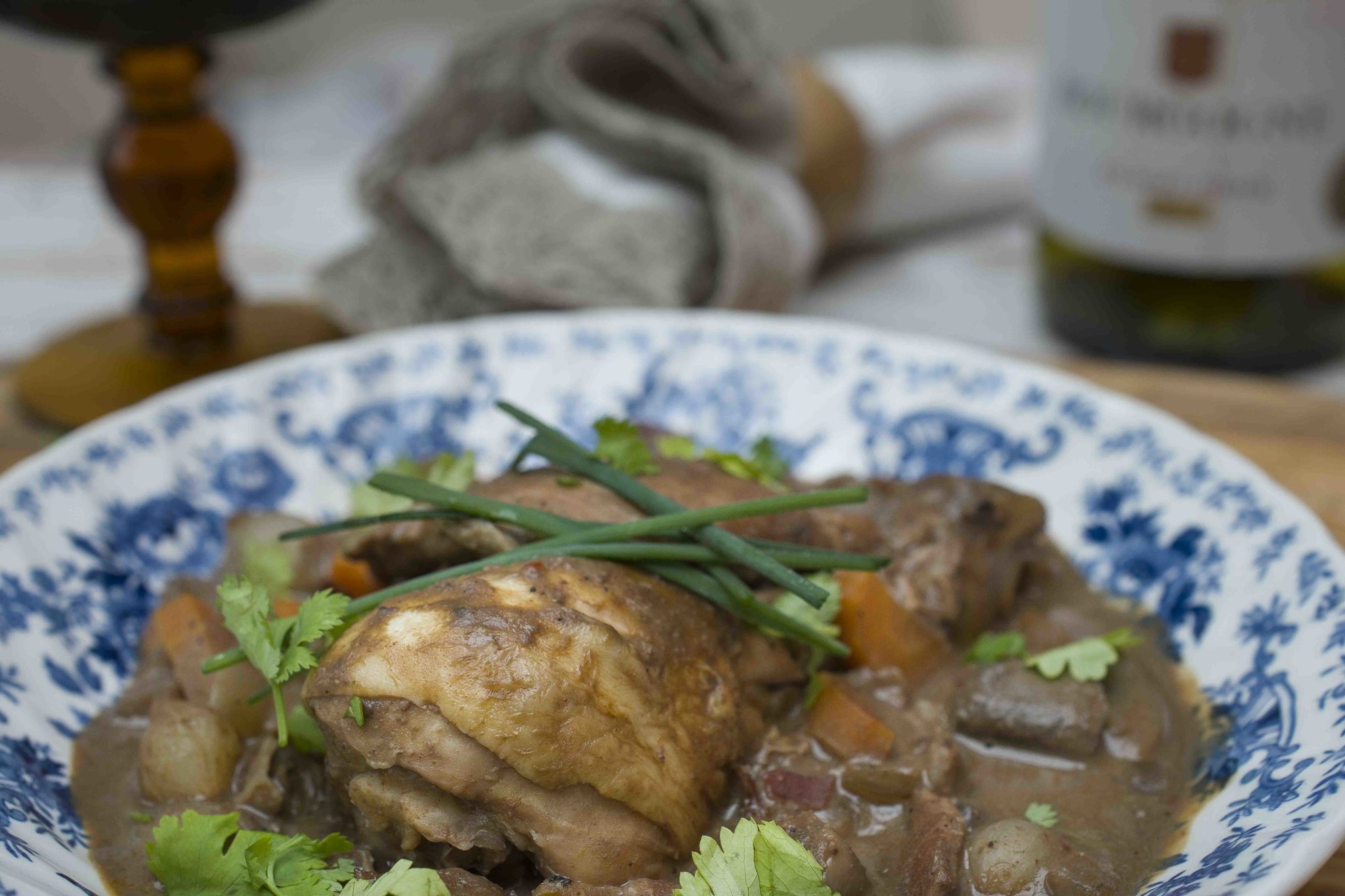 Those peasants (but not the ones coming from the Balkans) had to keep chicken because of their meat and eggs, and kept the roosters because of chicken. When roosters became too old to perform their duty, they would end up in coq du vin.

As their meat was old and chewy, it demanded some additional preparation. First, staying over the night, and then slow cooking. Here is another usage of our dear Crock Pot-a.

Traditional way of preparation used to last for 3 days, and is considered one of the complicated French dishes to prepare.

Versions of cooked rooster in wine

Everyone has their version for which they sat is the best. And the rooster too…

From traditional, to modern and postmodern approach to preparation of such a dish. 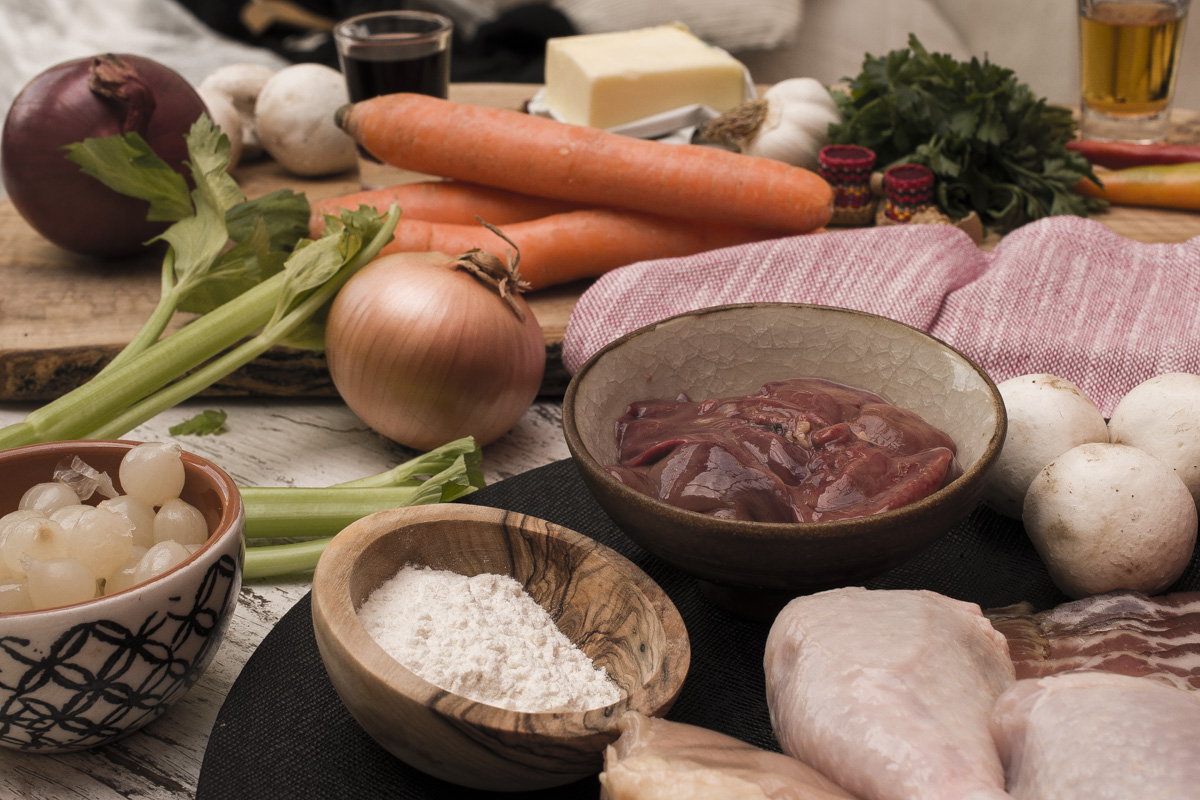 In those various approaches, various meat was used, but, no matter the meat choice, the name of the dish remained unchanged. It doesn’t matter if you use chicken, or an old rooster, the dish is still called cooked rooster in wine.

According to history and tradition, it was an old rooster that was used first.

‘When the hair turns grey,

I guess it’s the same with the poultry…

Then, in time, the recipe came over to hen, and then to chicken.

Afterwards, those more avant-garde and richer came over to the Capon rooster.

Capon rooster is a young and castrated rooster with significantly tastier meat. This is the most expensive version of a cooked rooster in wine.

Each of these versions of meat has its own wine types.

A simplified recipe is mostly used nowadays, where, instead of a rooster, chicken is mostly used. That means that instead of red wine which contains more aromas and a richer taste, white wine is used for cooking.

Today, red wine is believed to be too strong and that its flavor would be dominant in the dish over meat. In Alsace, famous Riesling is used. By the way, Alsace is set near the German border, so that explains the Riesling influence. 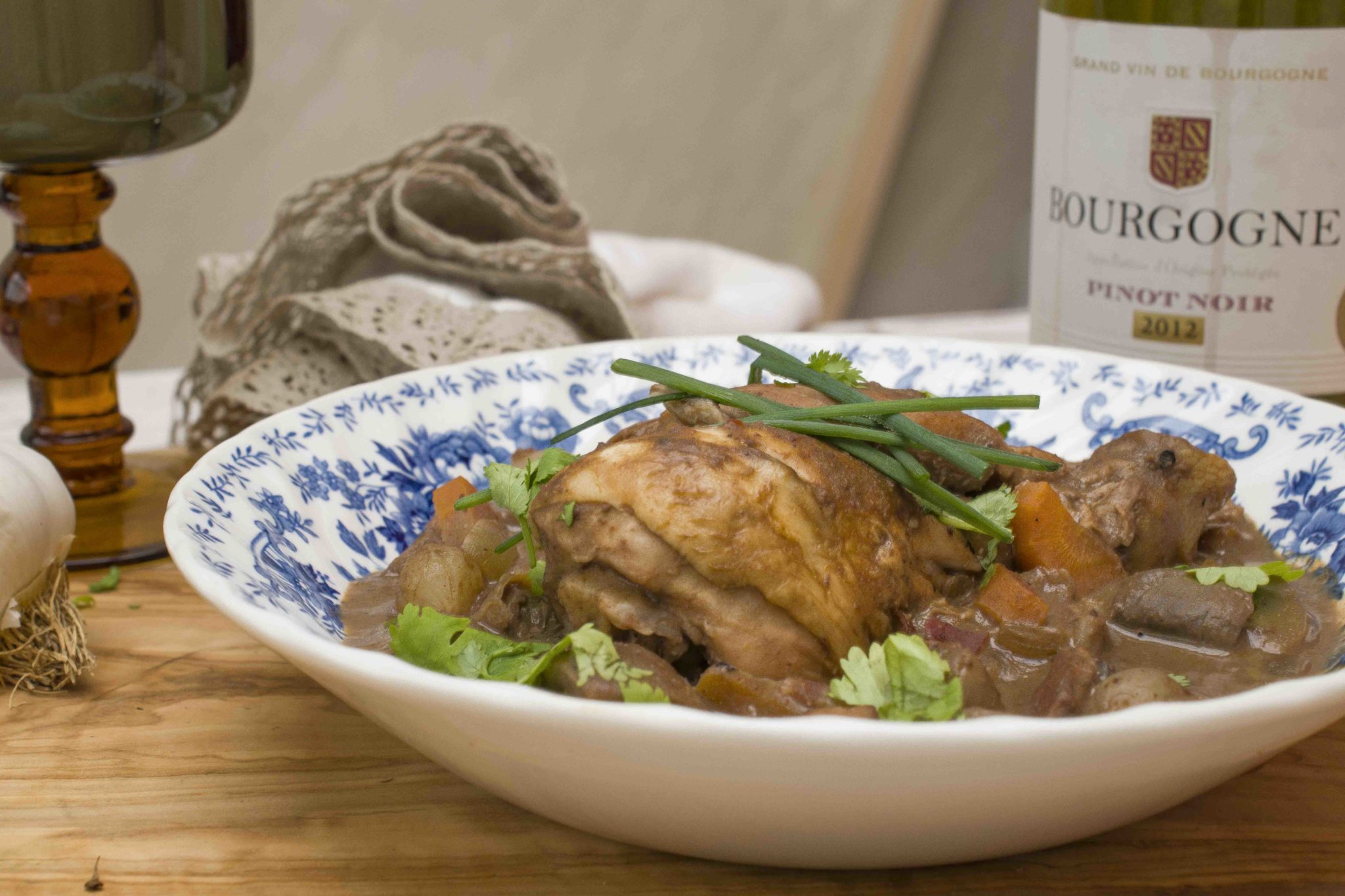 What is important to know when preparing the original recipe?

Coq du vin from out table

I have to admit I mixed the traditional and the modern approach a bit. Although I sometimes feel like I live in a big village, I couldn’t exactly enjoy its products.

And here is why…

I tried everything I could remember for ten days in order to get a rooster, and nothing happened…. So I lowered my criterion to a young rooster… and was left empty-handed as well… just to finally be satisfied with chicken.

I guess chicken is the most numerous on the market 🙂 everyone is looking for chicken, so it must be why there is so much of it.

Is it possible that everyone keeps their roosters to make their own coq du vin???

The main ingredients of the chicken in wine recipe look like this… there is so much of it… I don’t get how it could be the dish made by the poor peasants. 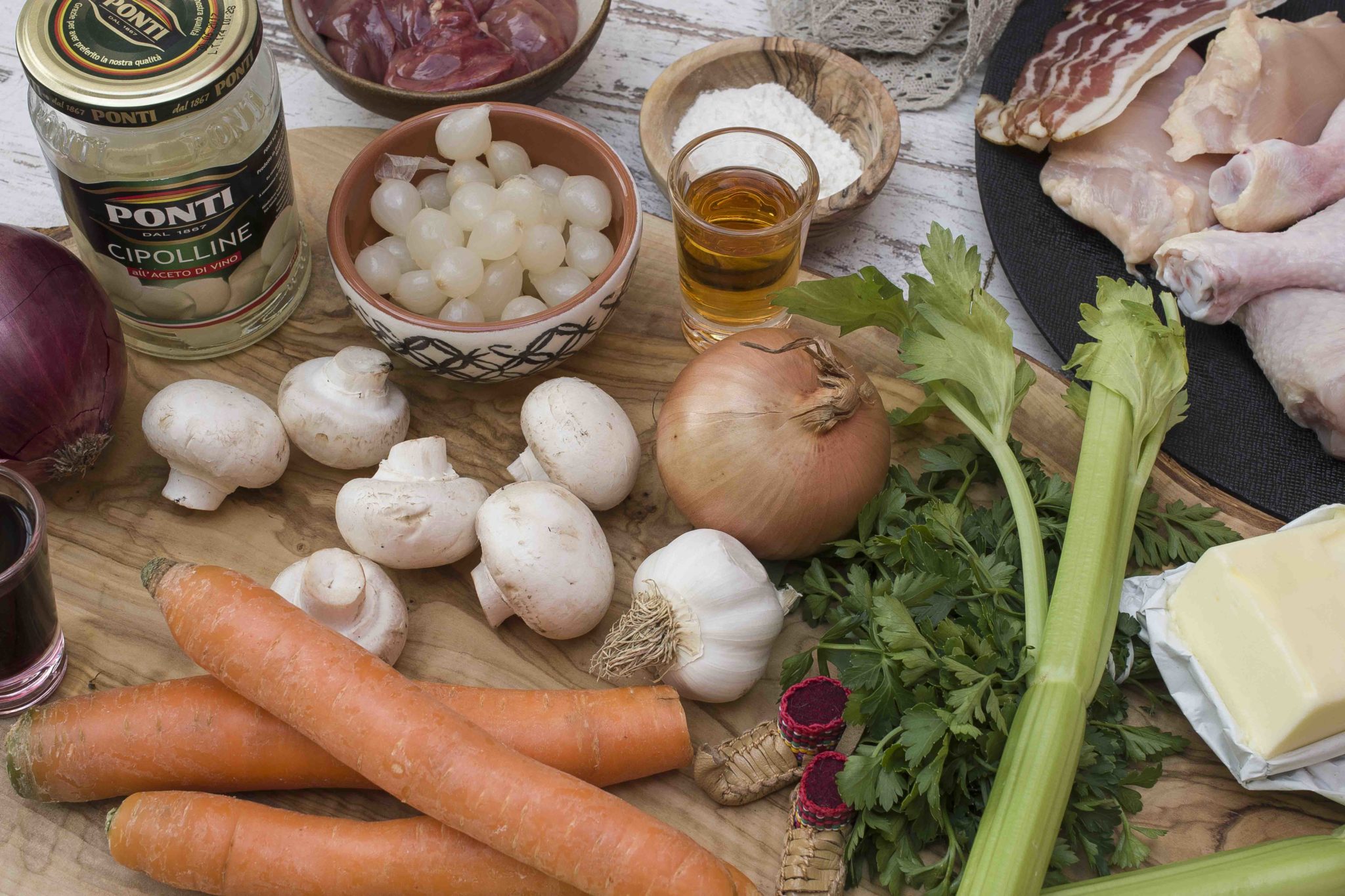 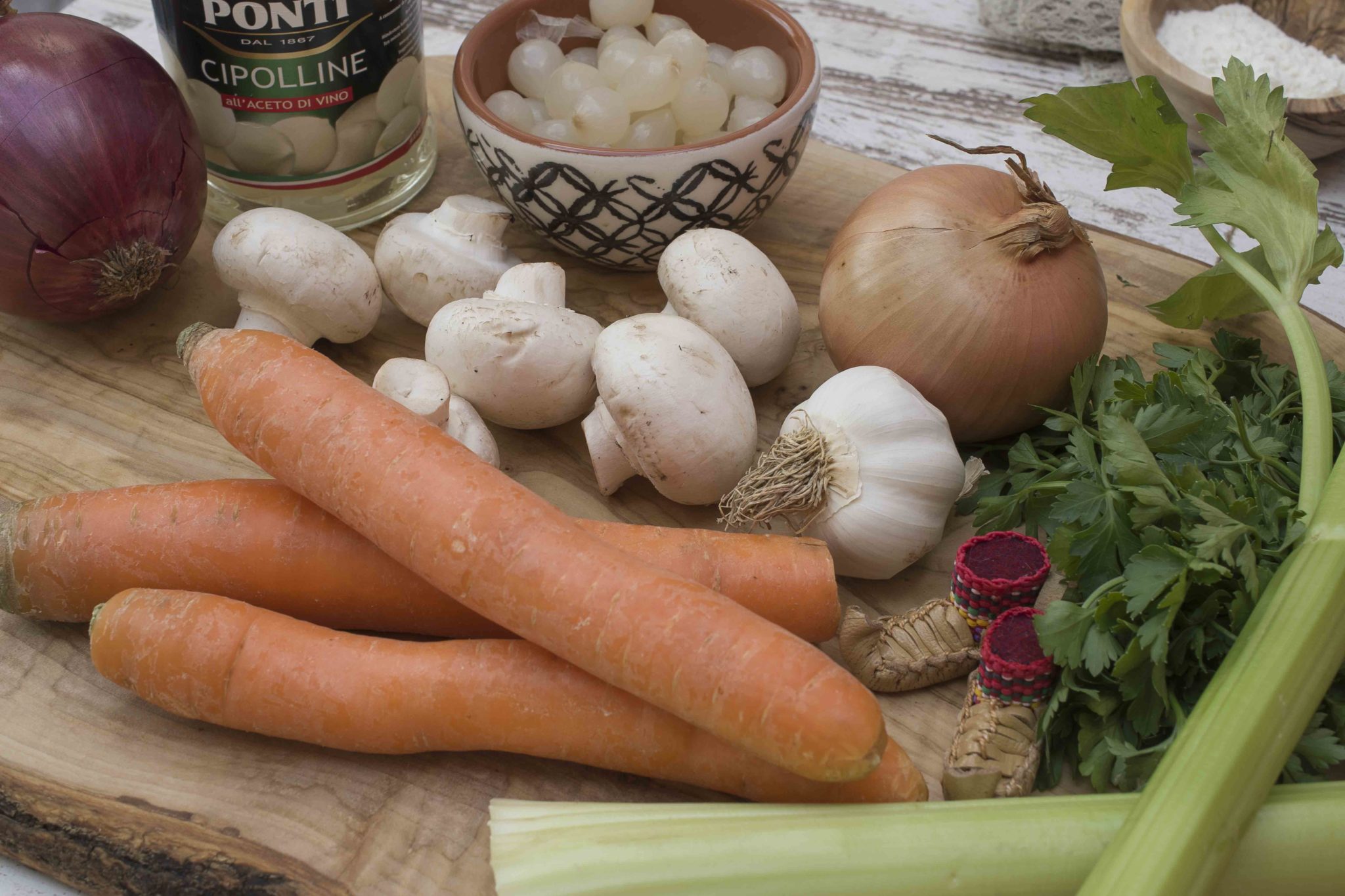 And the best selected meat. 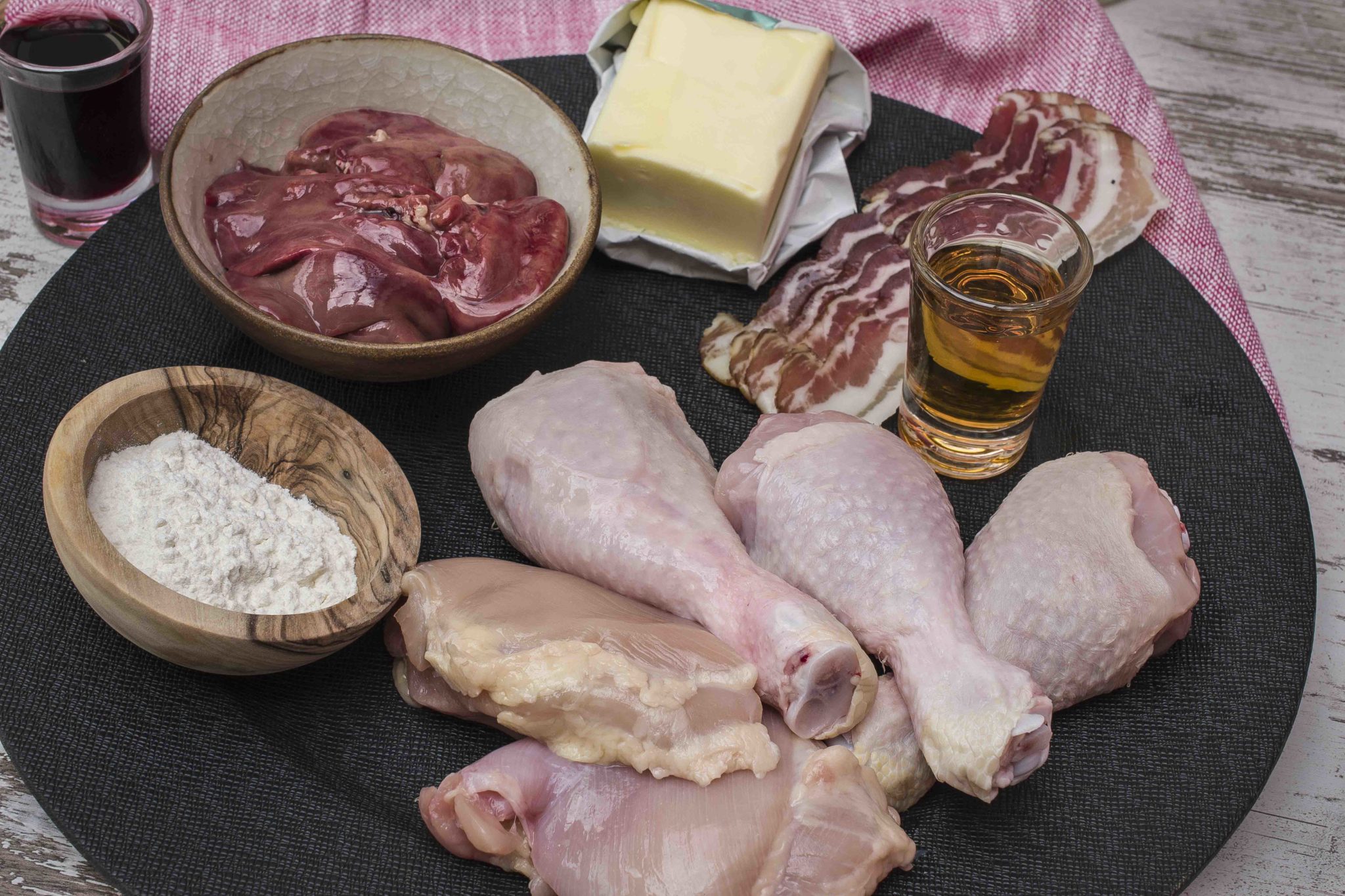 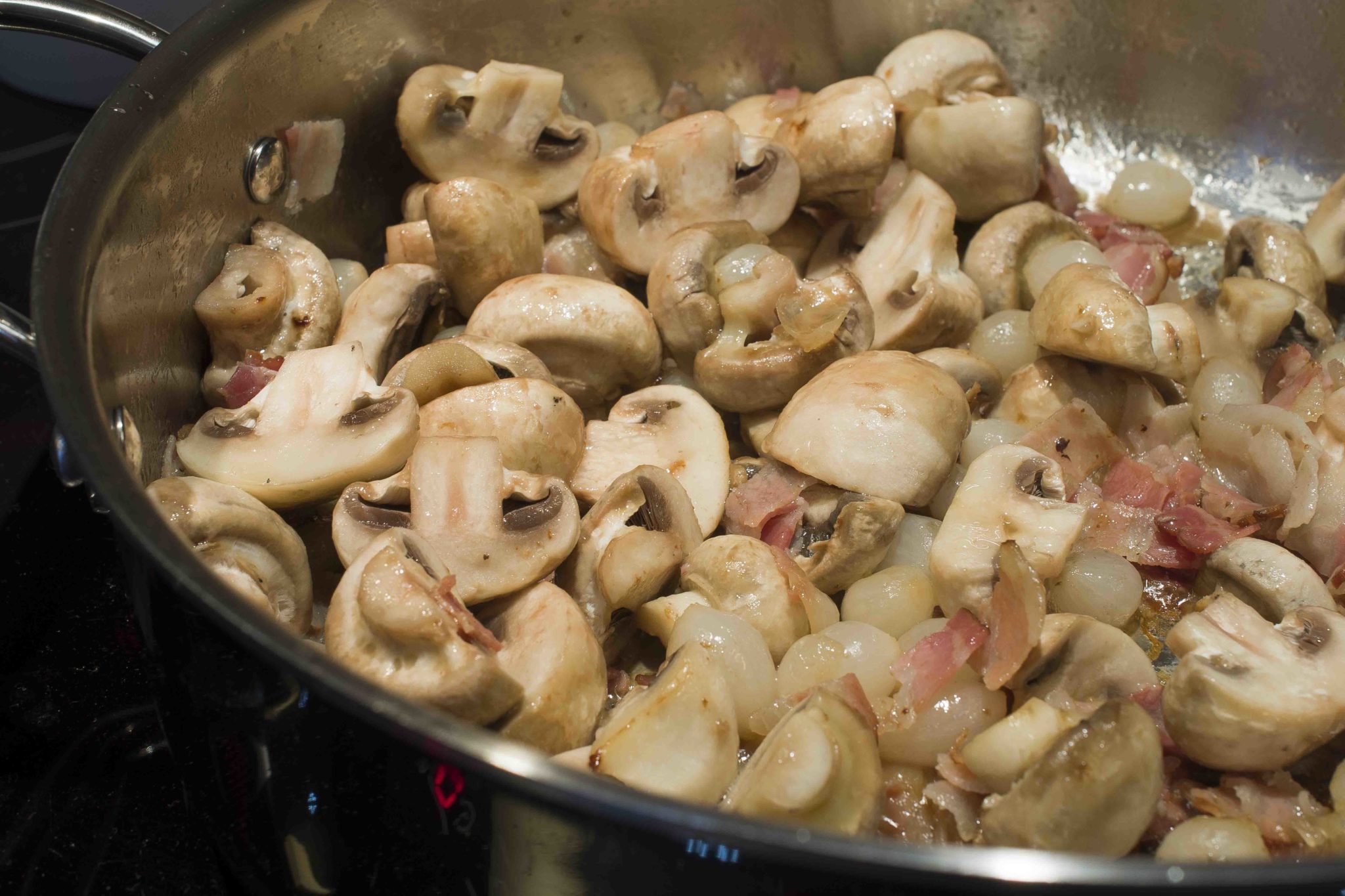 I left it on the side until I fry the meat in the same pan. 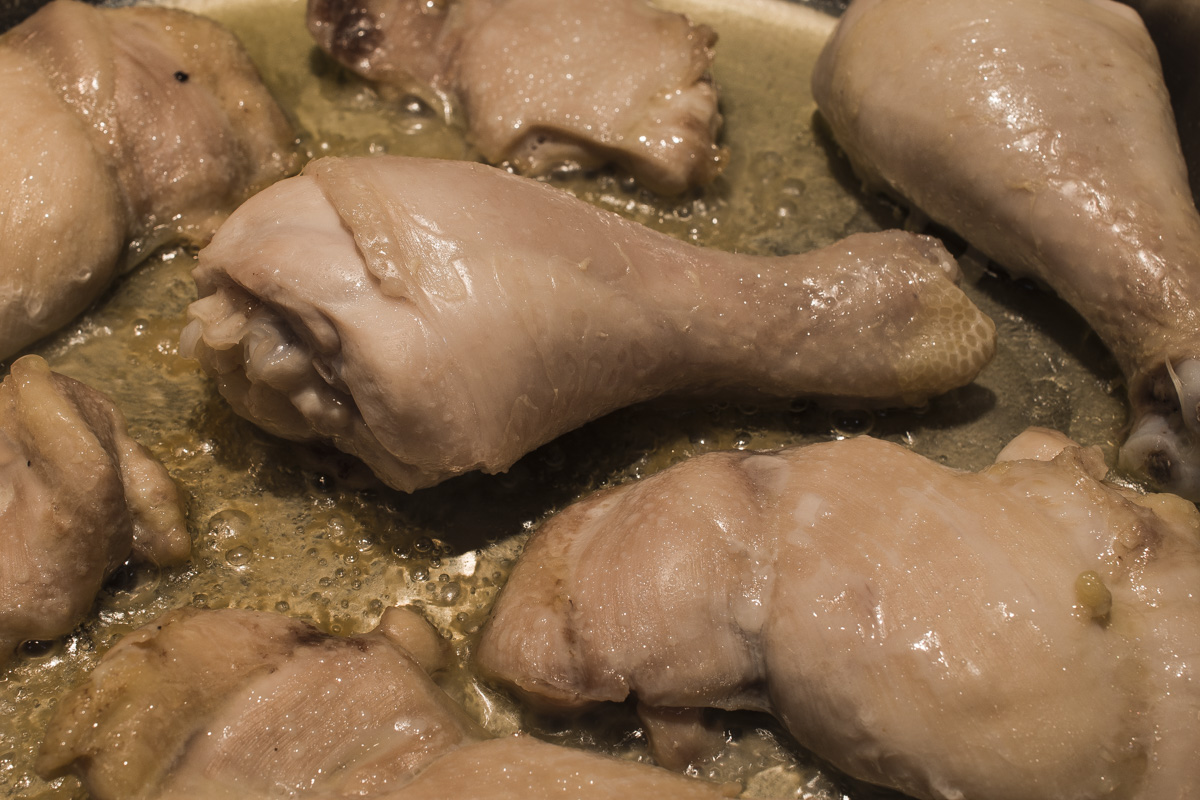 Look at the colors… 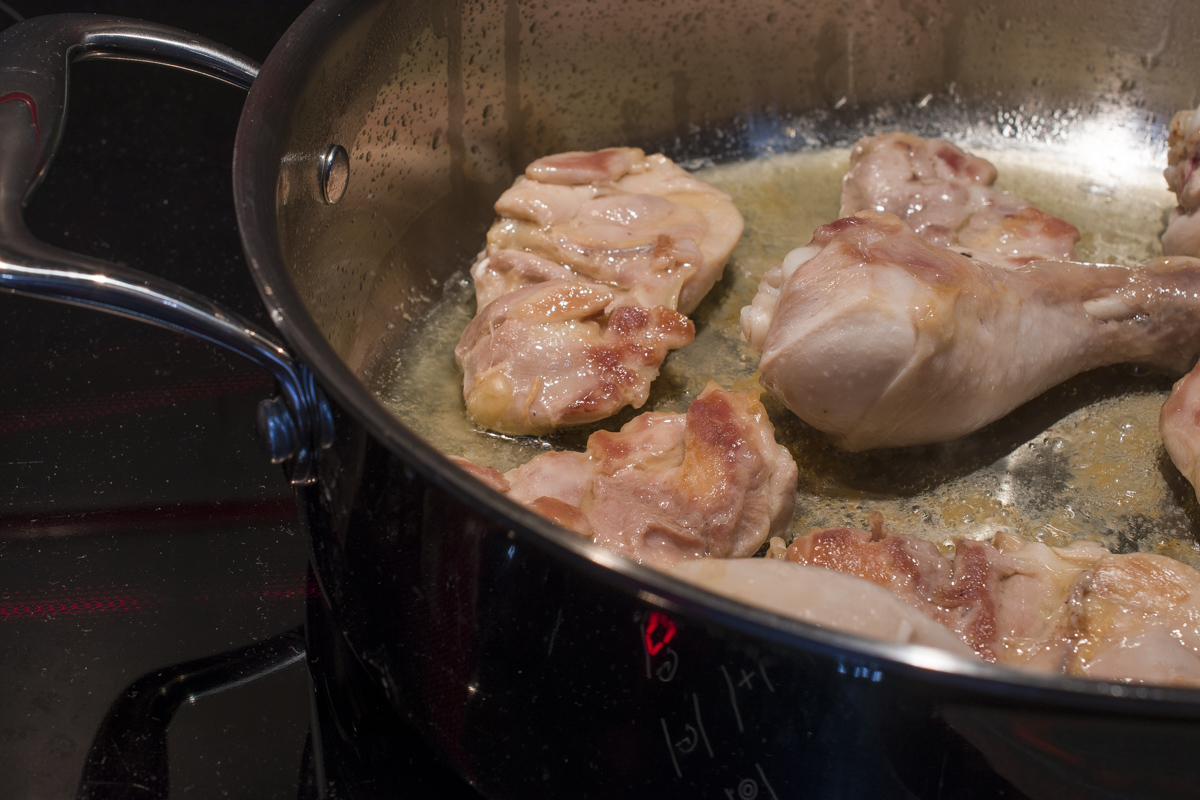 I added cognac and flambéed it.

This was the first flambéing in my cookery life. I was terrified.

When meat was done and got its color I returned the mushrooms and dusted it with flour. 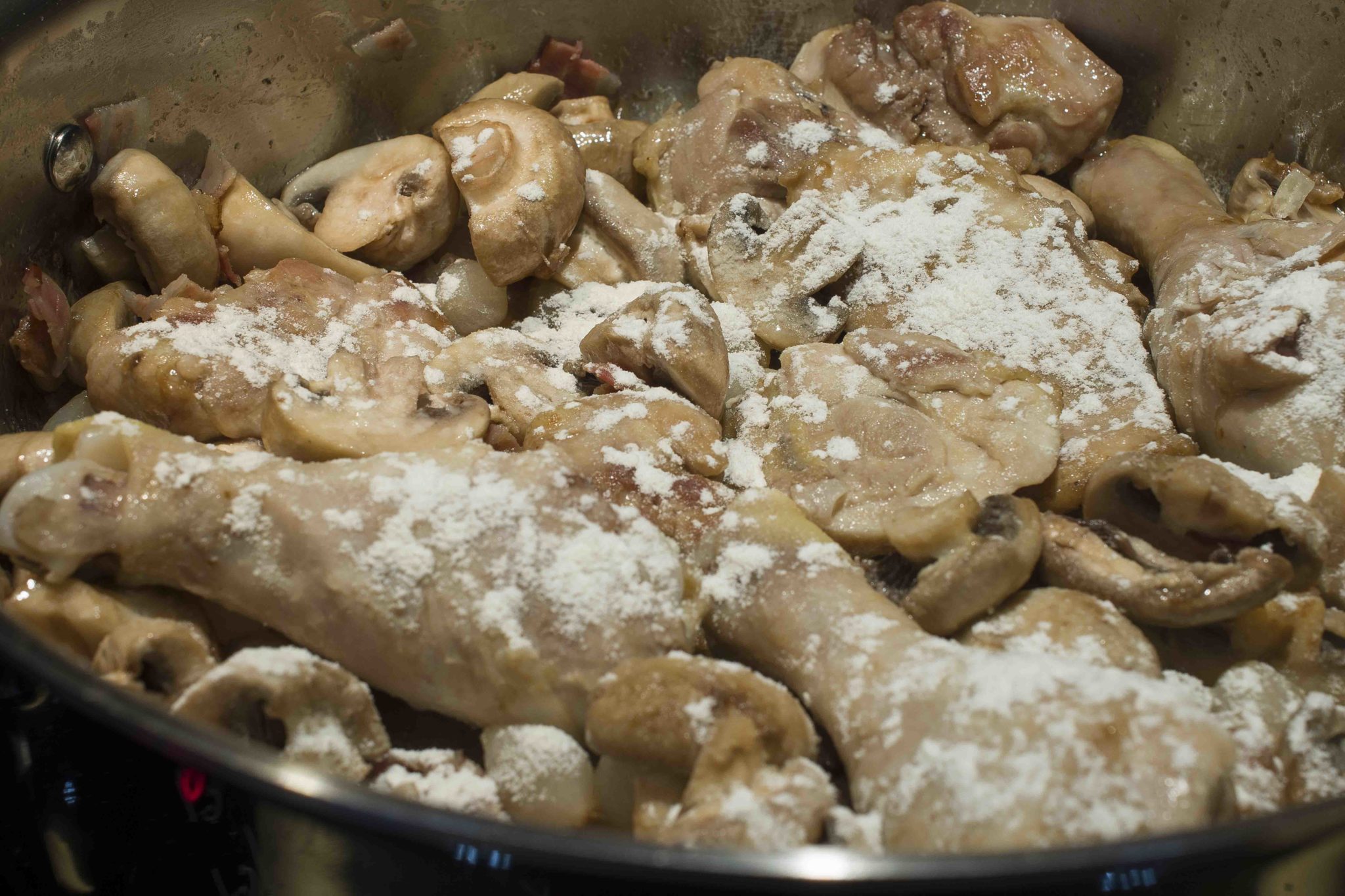 I added the rest of the vegetables. 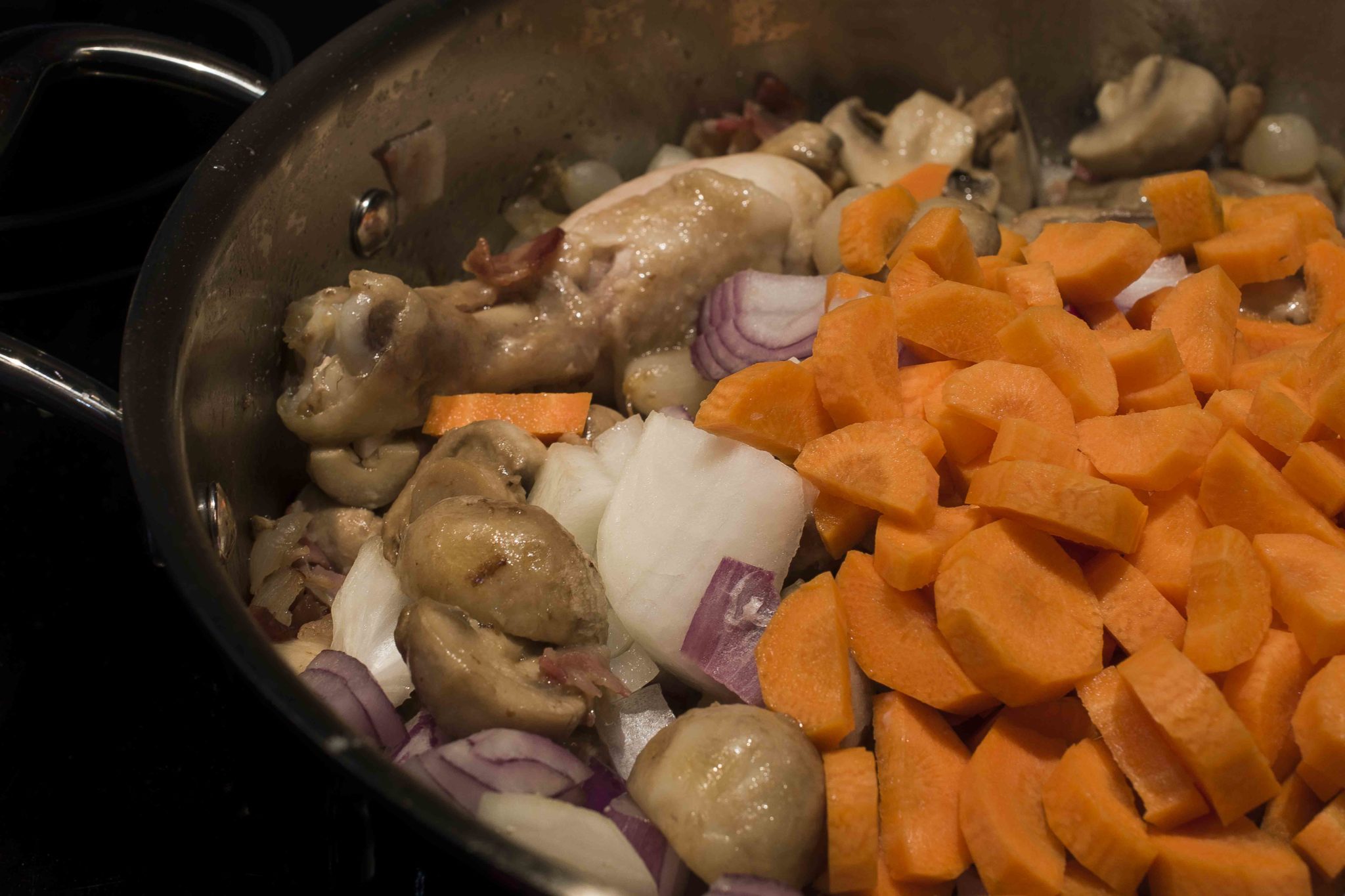 And of course, adding some traditional seasons, and then, I stewing them. 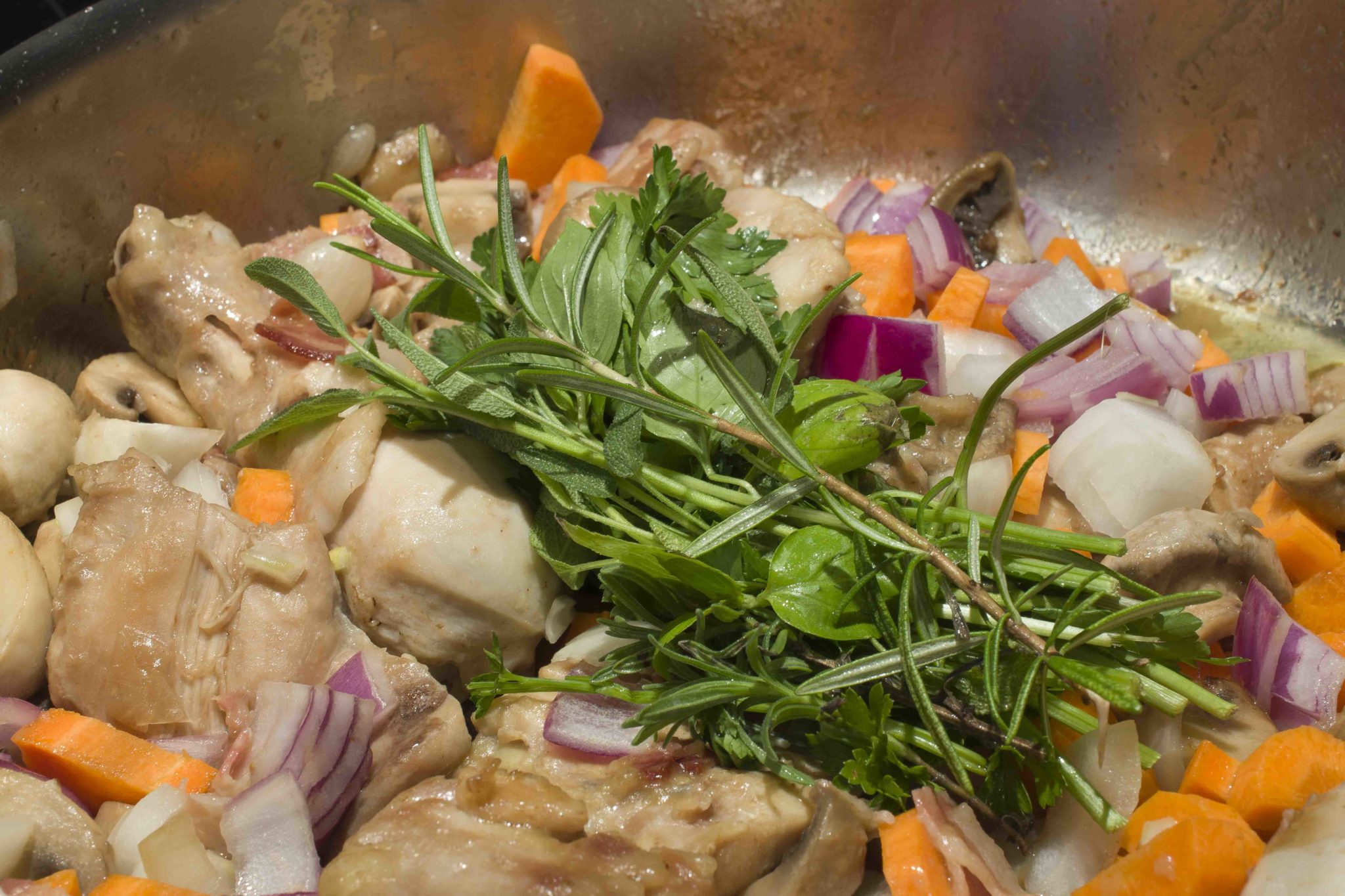 On the other side, in a separate dish, I fried liver with some onion. 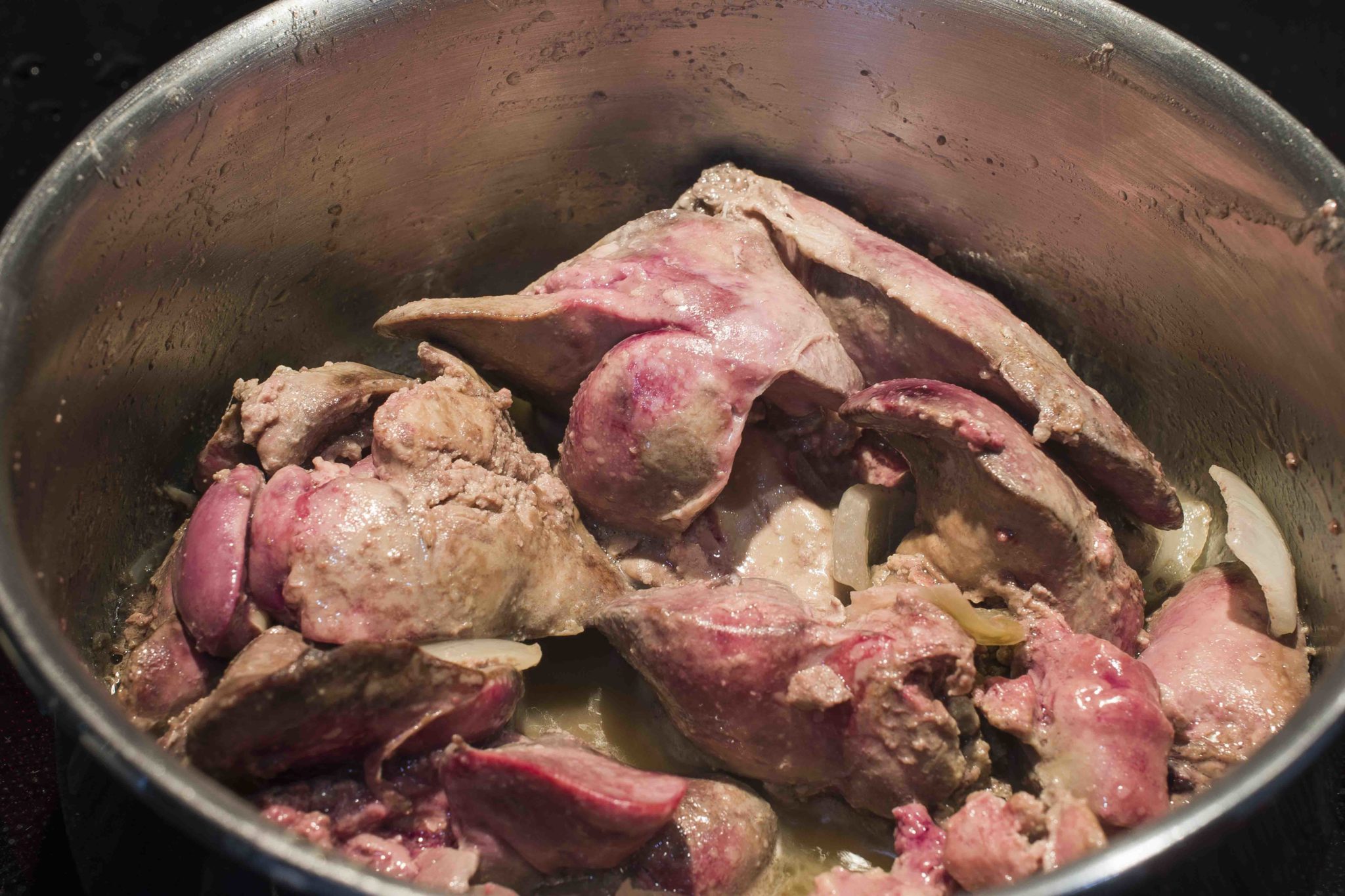 Add celery and chicken broth. Stew it until the broth reduces. 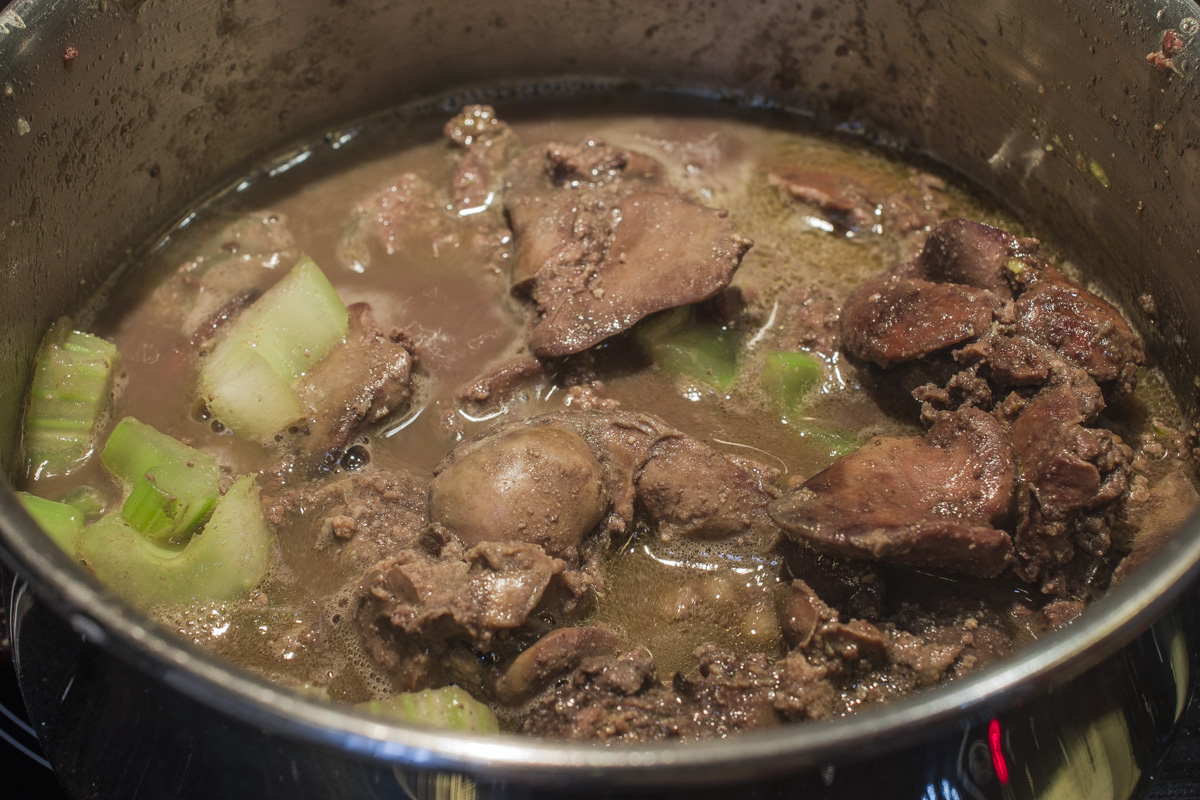 After it reduces, put everything in blender to make a homogenous mixture.

I returned everything to the neglected pan.

I added a liter of wine (no other liquids are added apart from wine) and the liver and celery paste I made. 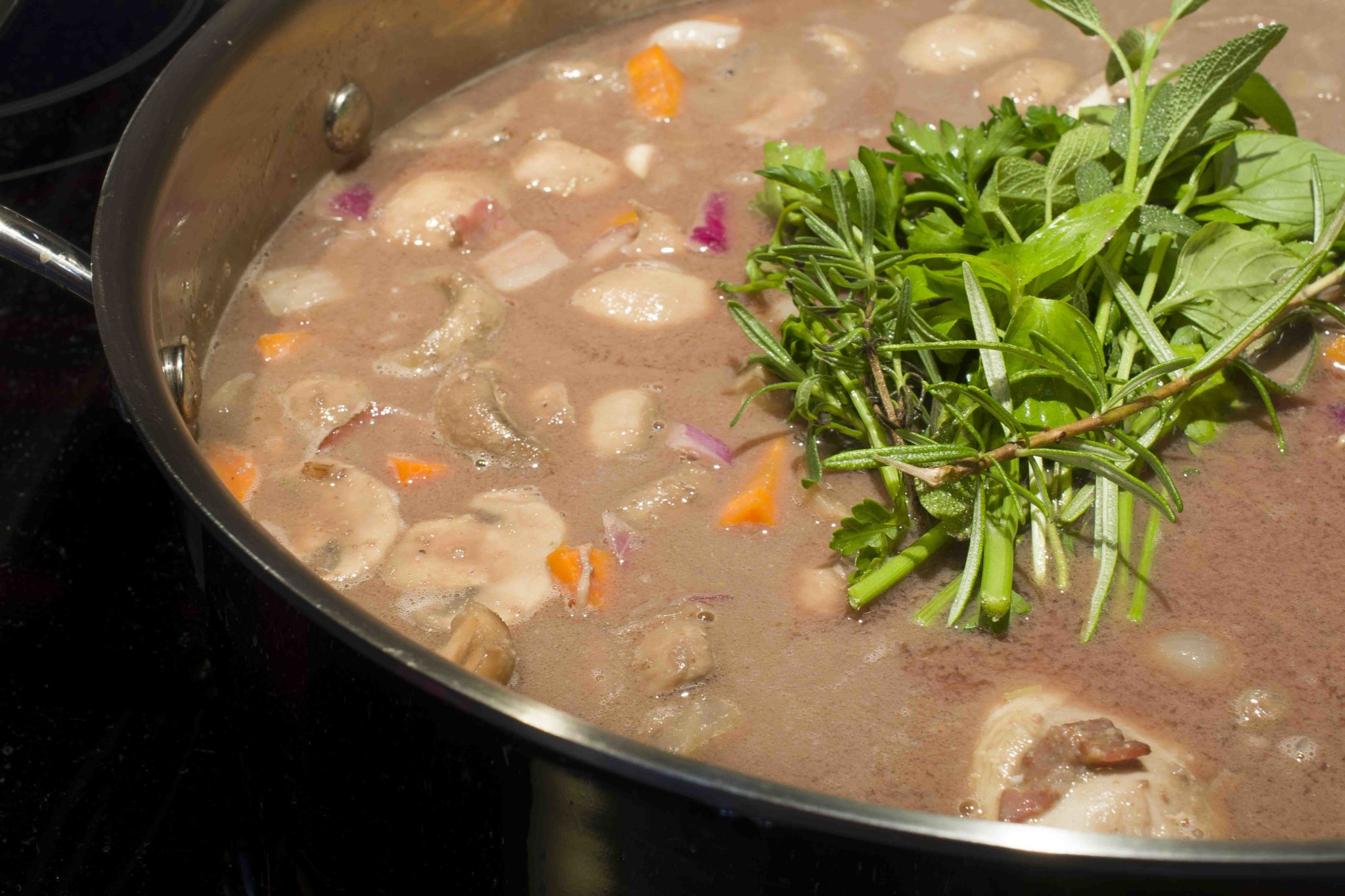 Mix it all, cover and leave our chicken in wine on the side to slowly cook. But not for long… because we said… it’s chicken, not a rooster. 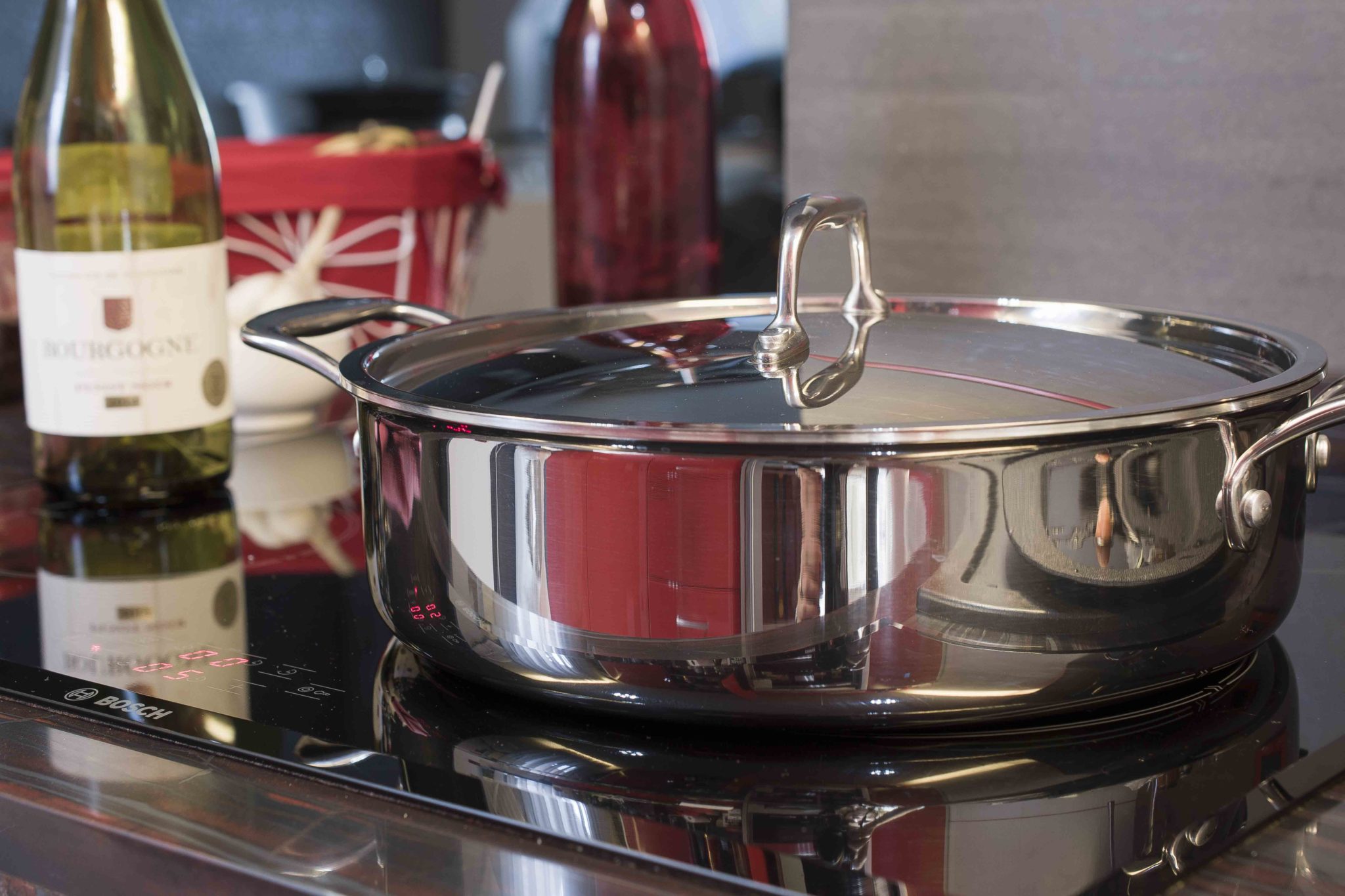 When chicken in wine is done, serve it and decorate with chives and coriander and serve while it’s warm with a glass of Burgundy wine.

Chicken in wine is a dish with a completely different flavor than you would expect at the beginning of its preparation. It is all about the wine, so don’t hesitate to spend a lot and buy some more quality wine which will enrich this dish.

You can eat it with burned to crisp croutons. 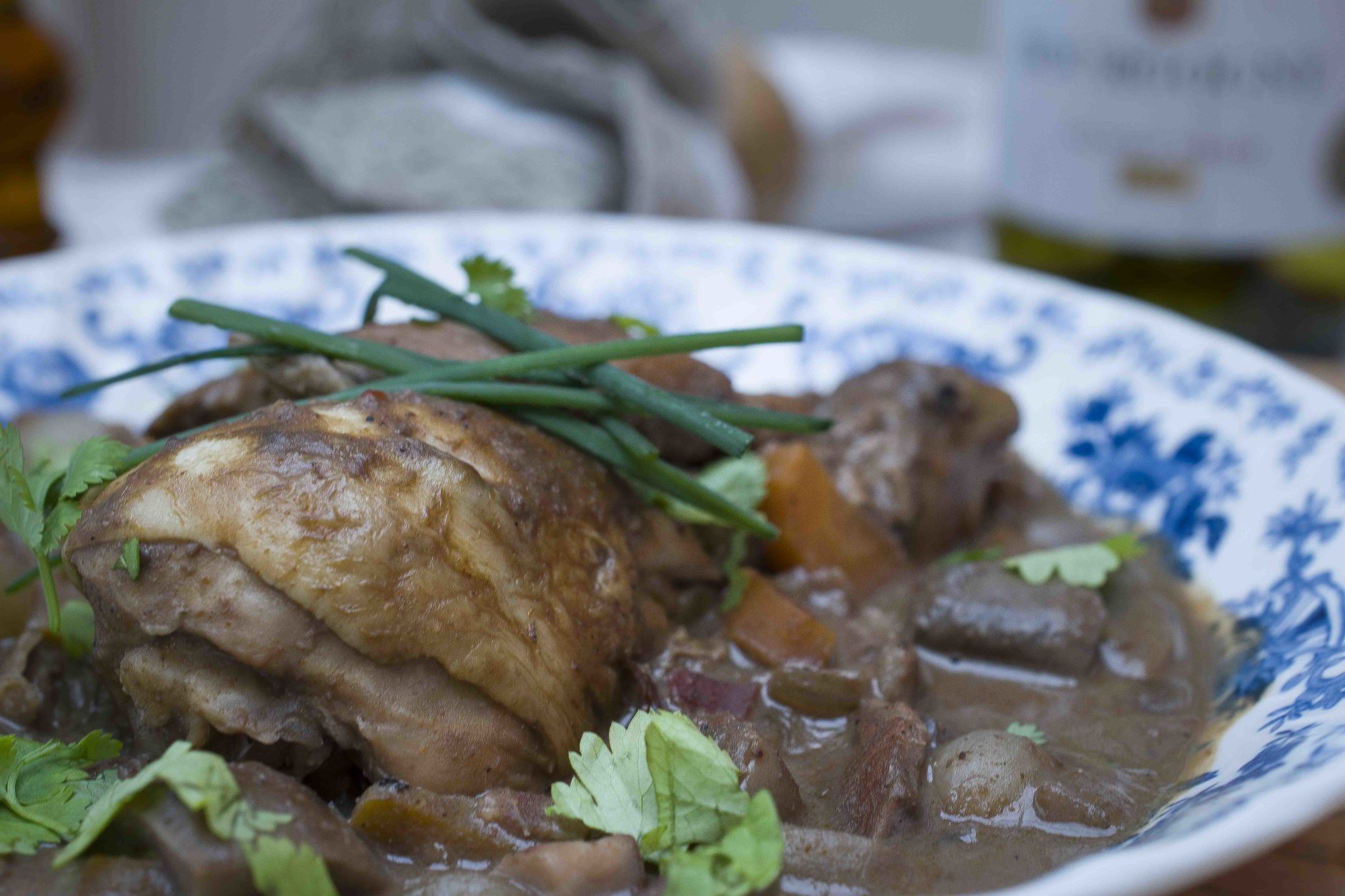