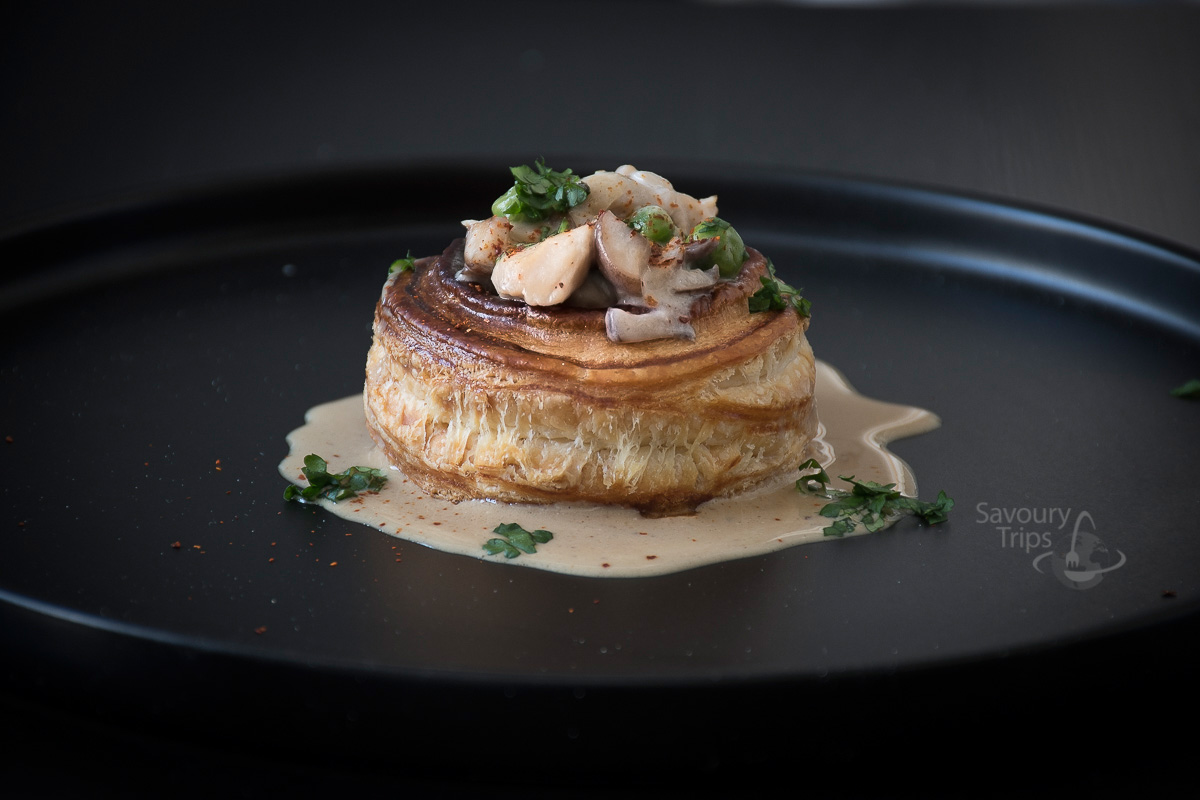 Chicken tartlets with coconut milk how it is made?

Tartlet is actually a smaller tart, which is most often filled with sweet stuffing. We will upgrade it here and fill it with salty stuffing.

Depending on how it’s served, and its size, it can be a great version of comfort food, if you make it in a bigger baking tray. If it’s a bit smaller, that is, if it’s a tartlet, then it falls into a bistro category, which is most commonly seen in restaurants. At the end, we come to the most elegant version of a mini tartlet, which the French call “gastronomique”, and we know it as “fine dining”. 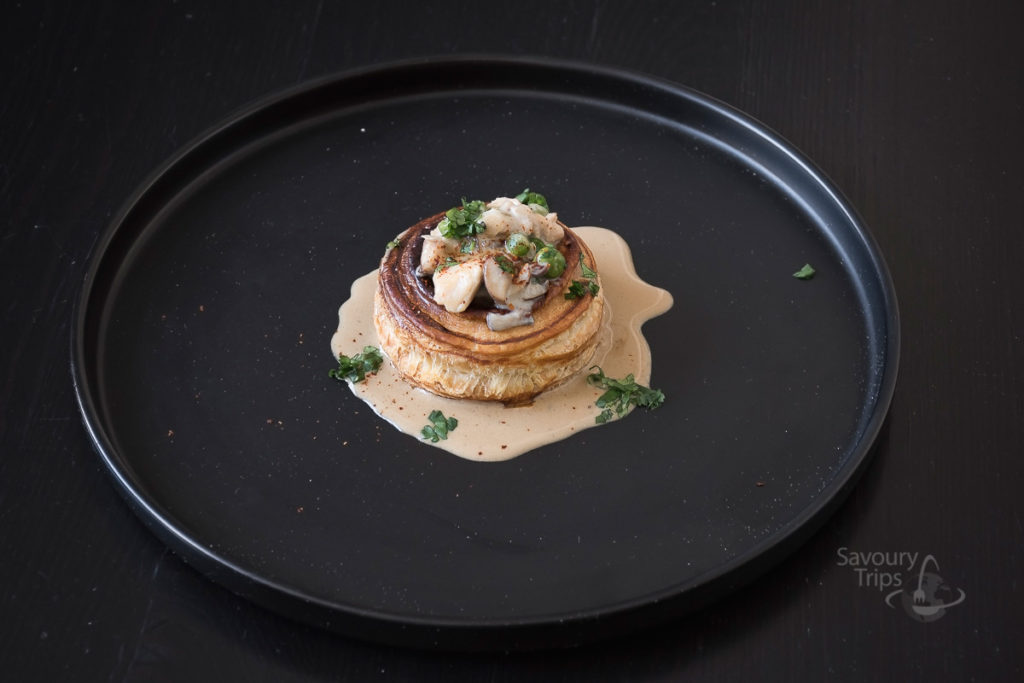 That means that tart can be made in all options and all occasions… from the simple ones, to the most formal ones 🙂

My version is something between bistro and gastronomique version, and it belongs to a mini tartlet.

The most important ingredients for chicken tartlets

The ones I made had a bit of an Asian flavour. You can certainly substitute these exotic elements with something else, and I will give you some suggestions.

All the measures are for two persons. Half of a chicken breast (or turkey, duck, guineafowl, pork),             1 shallot, 4-5 medium-sized mushrooms, 100 gr of peas (frozen or fresh; or you can use broccoli, that is, any other green vegetable), 1 egg (separate egg white and yolk), 150 ml coconut milk (or regular milk to your taste, sour cream, cooking cream etc.), 2 teaspoons of coconut butter (or regular butter), half a cup of chicken stock (you can substitute it with stock cube). Salt and pepper are, of course, necessary. I added ginger, ground hot pepper (piment d’espelette) in one of the phases of cooking… 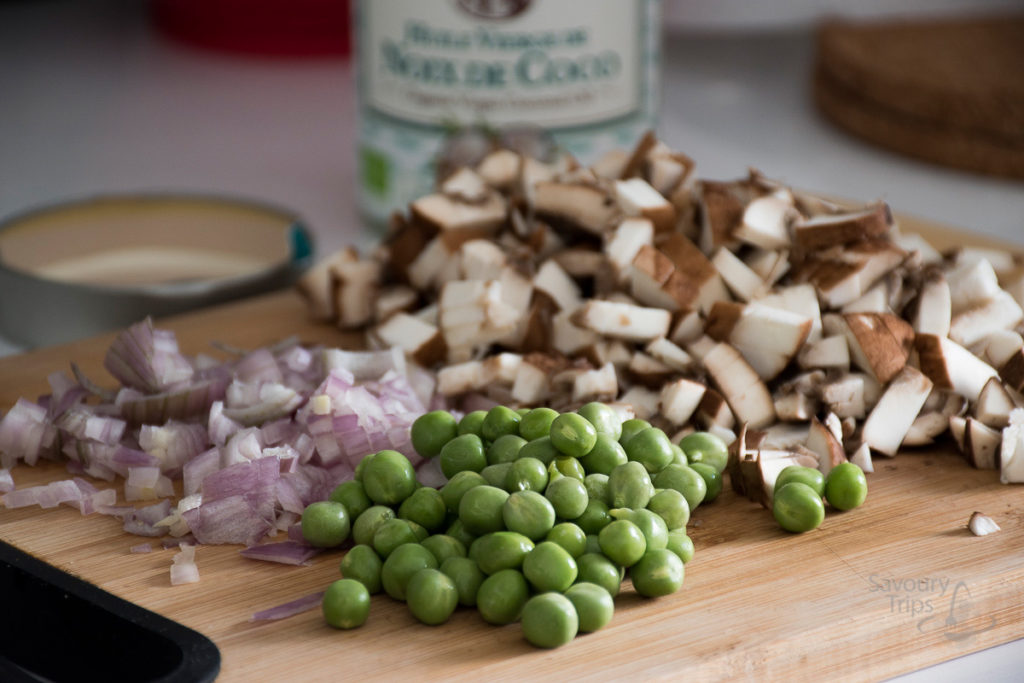 I had chicken gravy as well, which I made in this way.

This is store-bought puff pastry. I stretched it out and cut it with a cookie cutter in sizes that worked best for me. That means diameter 8-10 cm. I made 4 chicken tartlets and cut 16-20 circles. Cut puff pastry for tart and tartlets with cookie cutters

I saved 4 full circles cut this way, and then I additionally cut the other circles with a smaller cutter of 4-6 cm diameter (the smaller the circles, the smaller the tartlets), so I got this ring. 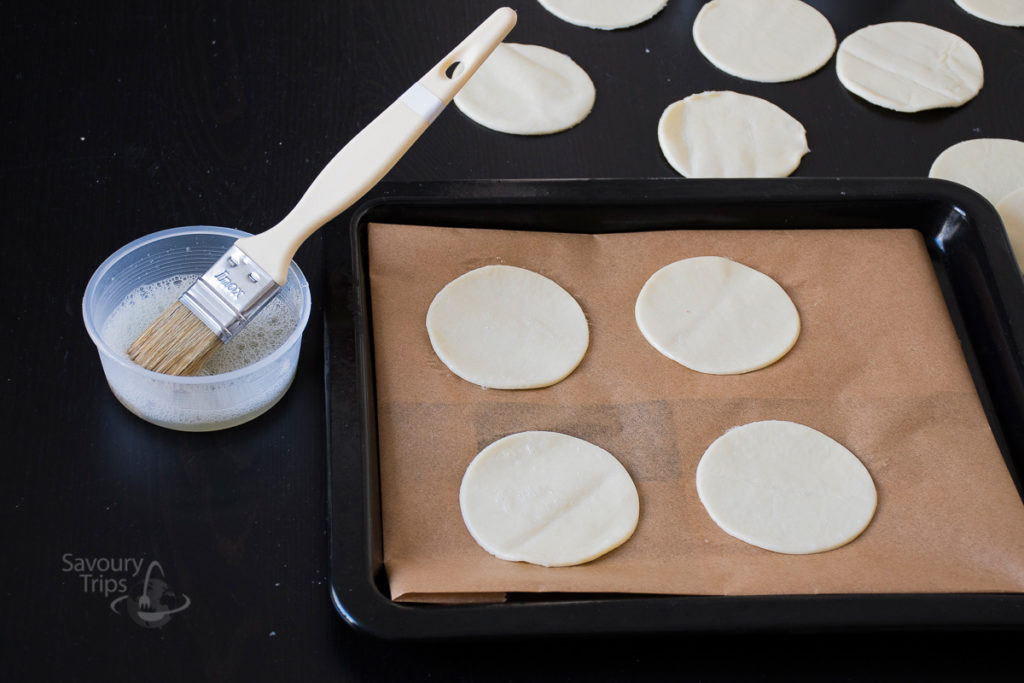 Connect the dough with egg whites

You can certainly cut with cutters of larger diameters. Use whisked egg whites to glue the rings together for the base, which was a full circle cut in the way described at the beginning of this chapter. I put 3 rings on that full circle. In this way, I got an open roller on one side.

What did I want to achieve with the sticking?

Well, by putting it in the oven and turning on the fan, the puff pastry will nicely grow in height. And, I will also gain on the design of the tartlet. 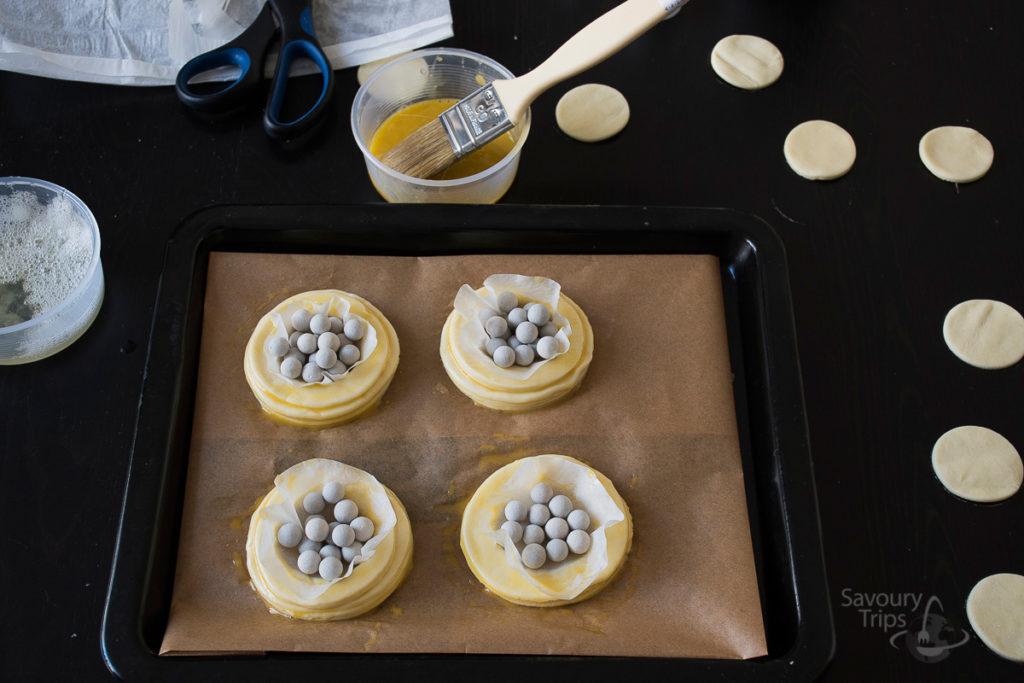 I covered the inside of the ring with baking paper and put the balls that served as a load so as not to have the dough grow on all sides in the oven.

I removed the baking paper and the balls from the tartlet after 15 minutes of baking, and then I put the tartlets back into the oven until they became golden brown.

I coated the tartlets with whipped egg yolk before putting them in the oven.

In my option, I baked at 180°C, for 20 minutes. You can adjust the time according to your oven, so that you get the golden brown colour of the tart. 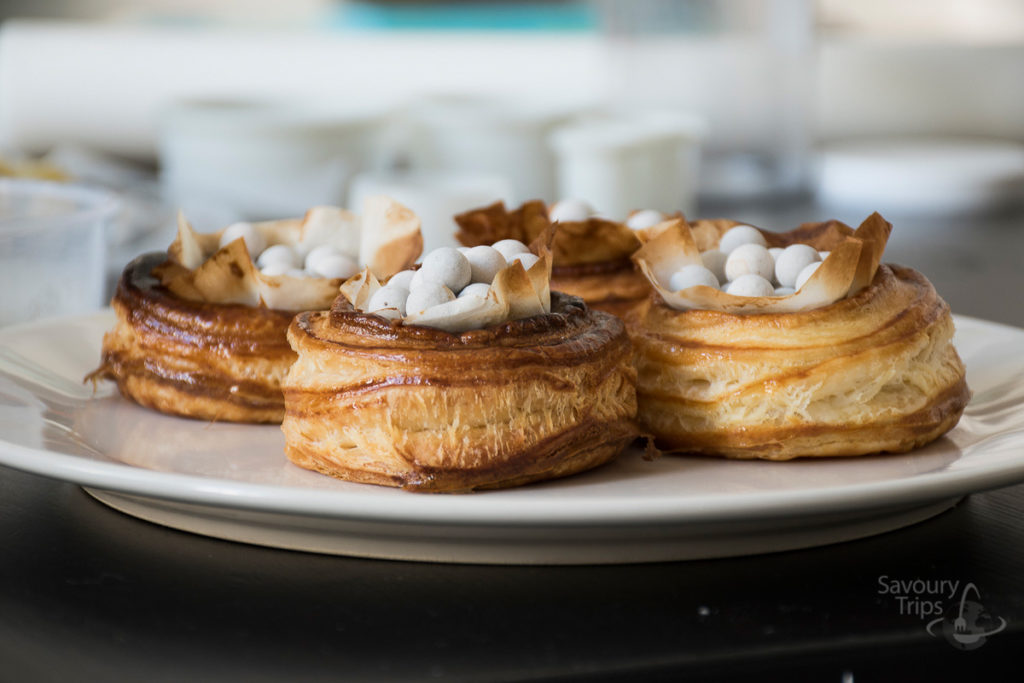 Since these are the chicken tartlets, I cut the chicken into very small cubes. The hole of my tartlets was very small, and I needed to stuff them, which was a challenge.

I fried the chicken separately on coconut oil, added ginger, salt, white pepper. When the chicken was roasted on every side, I put it aside to wait for the next step.

I used shallot because it is not as strong as a regular onion. You can substitute it with some other type, even leek if you have it. Just keep in mind that with leek you have to stew the white part separately, because it takes more time than the green part. You can add the green part of the leek near the end of stewing. 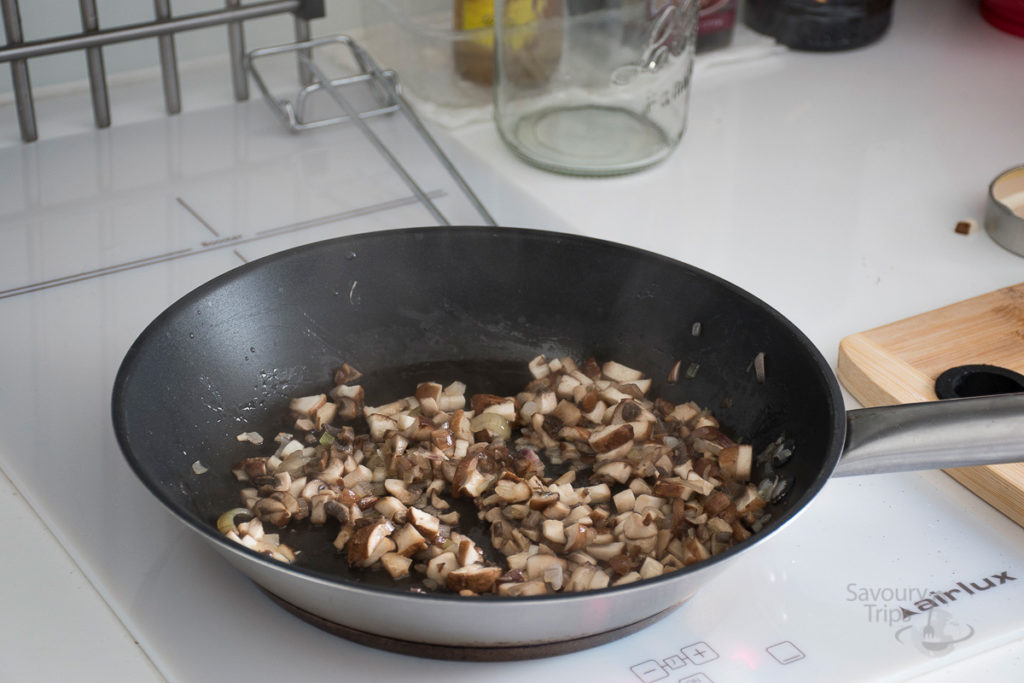 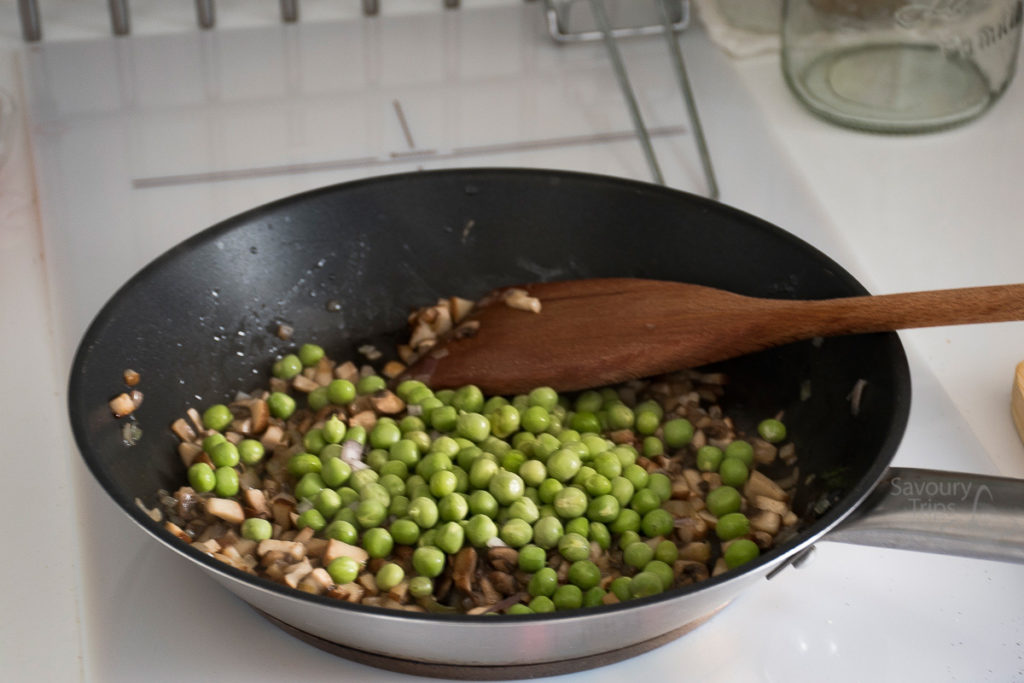 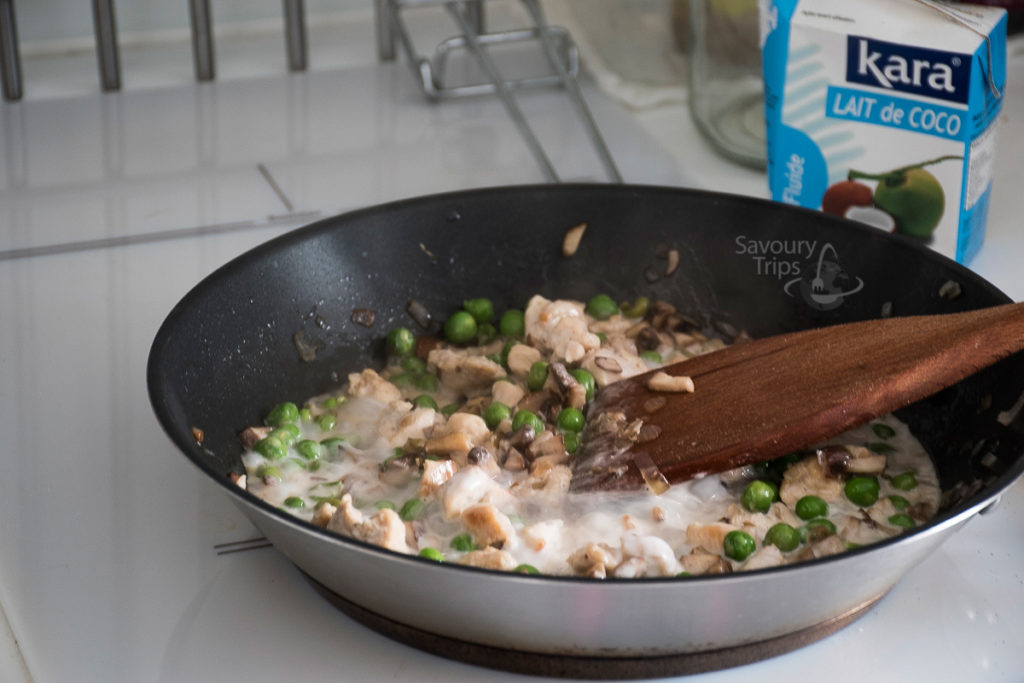 I cut the shallot in brunoise way, into tiny cubes. I stewed it on coconut butter, added mushrooms, and then peas. I stewed everything together for 5 minutes until the mushrooms released water and that water evaporated in the end. If you put frozen peas, you will have additional liquid you need to get rid of by additional stewing or reducing the next amount of liquid that is to be added to the dish.

Once everything is stewed, you need to add a little bit of clear chicken soup (100 ml) and coconut milk, ginger, salt, pepper, put the chicken back and wait for the liquid to evaporate some more, but not entirely.

Nothing without dressing, as the French would say. I made the dressing from gravy, coconut milk and ginger. I mixed everything together and cooked for 5 minutes.

Stuffing the tartlets with chicken

The puff pastry baskets have cooled down, which is what we needed. Put the tartlet on a plate and fill every basket with previously stewed meat and vegetables with a teaspoon (depending on the size of the tartlet). Decorate the surface with ground hot pepper and coriander and pour with sauce, that is, dressing on the basis of gravy. 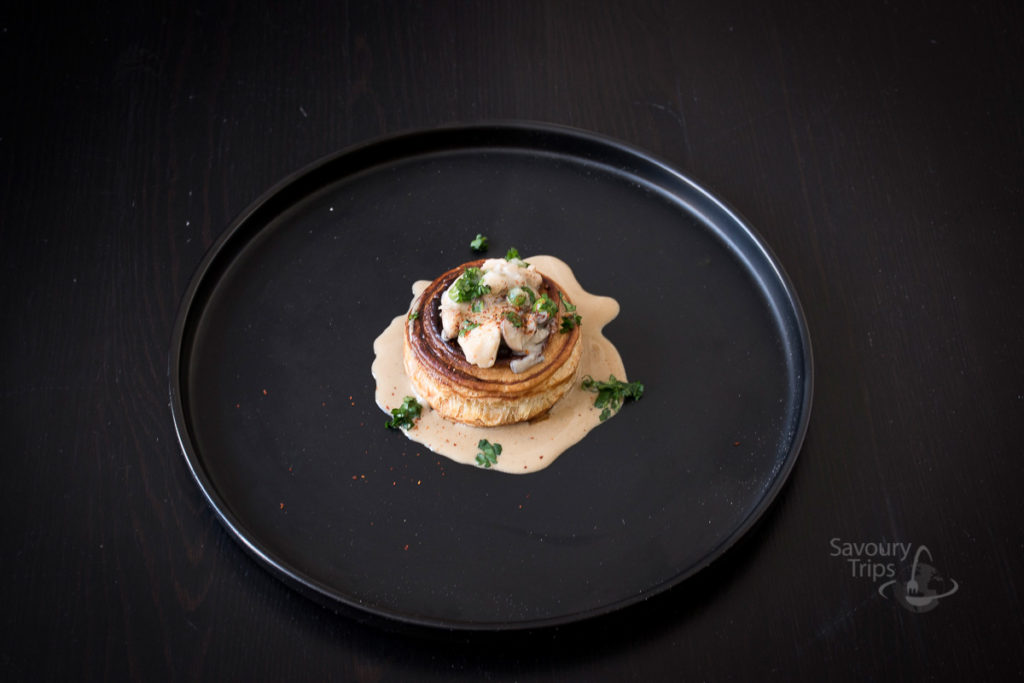 Believe me it’s delicious…Everything is so simple, and yet so different and for every occasion 🙂

Now…when preparing tartlets, you can make both salty (the one above) and sweet version. The sweet version that I highly recommend is with a combination of nutella, peanut butter and strawberries. I melted both peanut butter and nutella a bit and dilluted them with cooking cream, so as to get a mixture that is neither too thick, nor too thin. The one that will glide down your throat…

As a part of this heavenly aroma, I added fresh mint 🙂

It turned out this way: 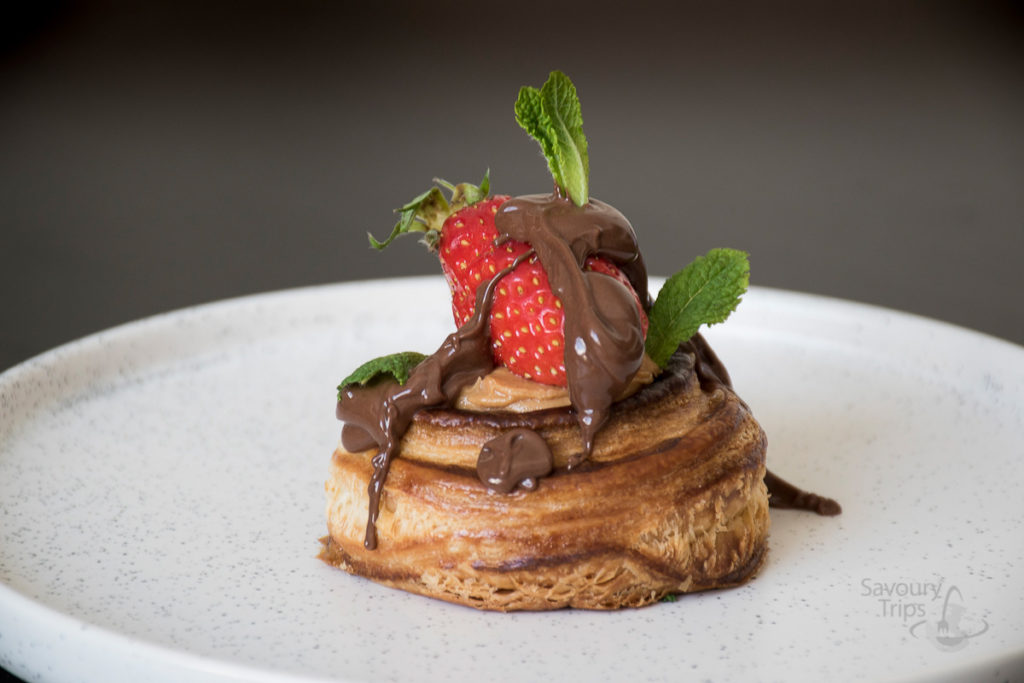