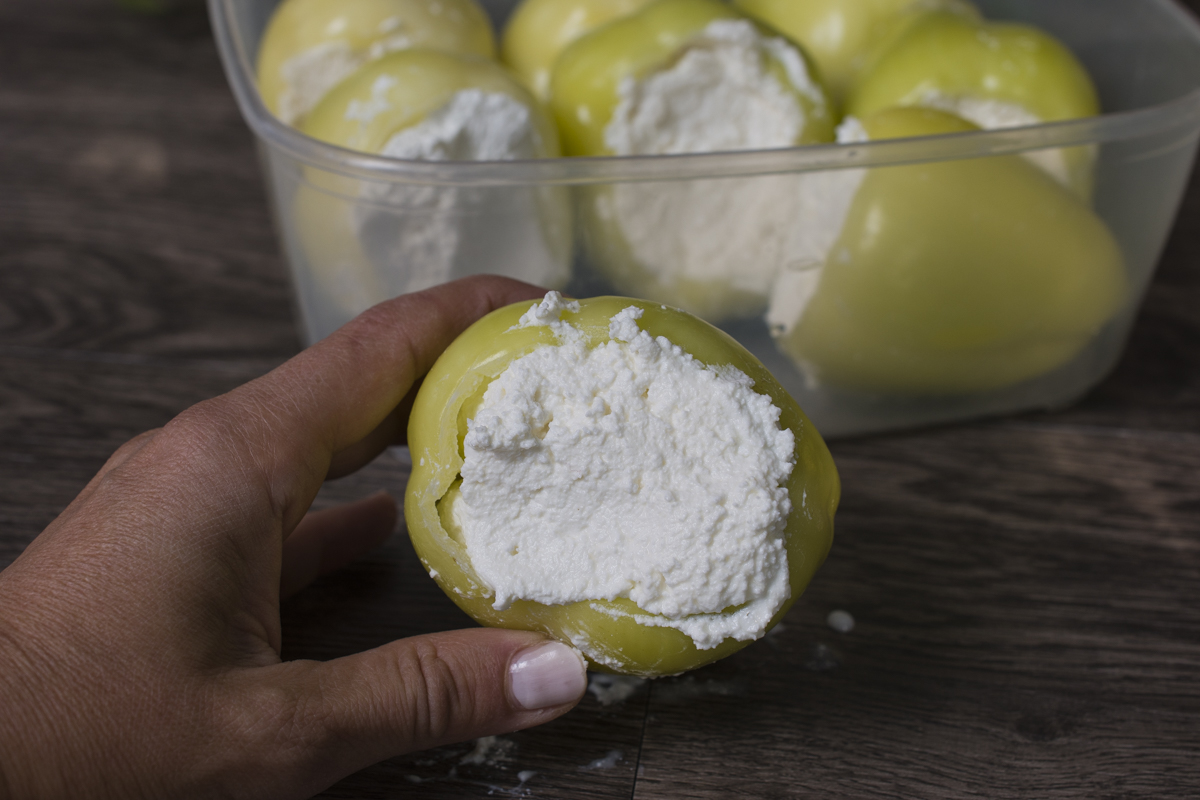 Honestly, I’ve decided to prepare peppers with cheese because I can’t find them anywhere in Belgrade… there can be either peppers in sour cream, or chopped peppers with cheese (so, not stuffed), or they would mix cheese and sour cream, and sell it like they are with cheese only. There are frauds everywhere. It seems like you can find and buy them everywhere, and yet the real cheese stuffed pepper are nowhere to be found.

Why? The recipe is as simple as it can be!

Cheese stuffed peppers remind me a lot of some older, long gone times.

An old recipe from grandma’s kitchen

The recipe for peppers stuffed with cheese is one of those recipes which are usually in some old notebooks with recipes written down by our grandmas. She kept most of the recipes in her head, and some of them she diligently wrote down to leave it as her heritage.

It is the season for home canning and preserving food. Most of the things are already canned. Juices, jams, ayvar, roasted pepper for salad (garlic pepper recipe here), etc. There is something left to cook, as she used to say, for her grandchildren, her pride, very simple, and yet so tasty, just the way they liked it.

A forgotten recipe. We used to adore them. Do you? 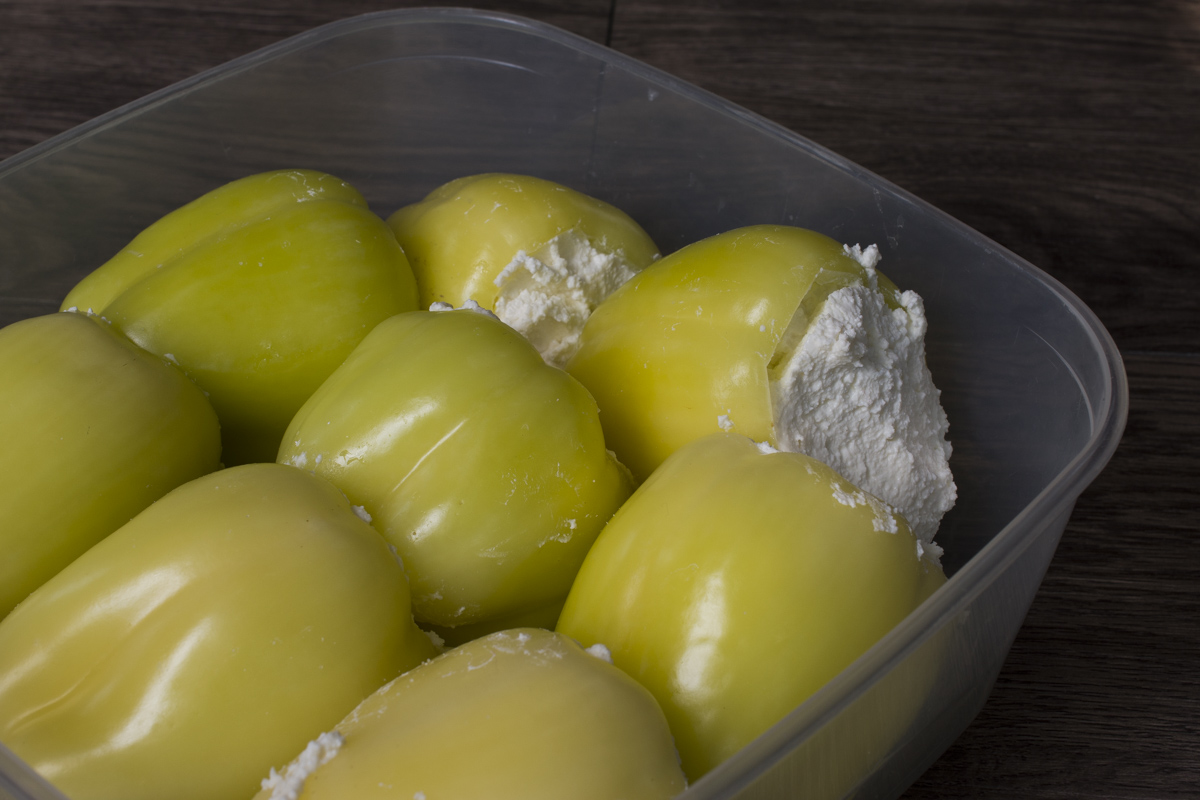 I get overwhelmed with my childhood memories whenever I remember her cheese peppers, as if I can already taste the whey and cheese.

I can see her tying her napkin and approaching the old and washed out sink, in order to first wash the peppers and prepare them for stuffing. Then, suddenly, she remembers she could invite the kids to help her with that and have some fun at the same time.

It was always the same ritual. We already knew how everything was going to happen.

We would all jump on her first sign, to mix our hands into all that cheese grandma has put aside.

There was first the inevitable washing of our hands up to the elbows. Twice, while she would monitor us.

Our excitement was great, it reminded us of playing in the mud and cooking lunch for our dolls, just this time the dolls were alive.

Great noise, laughter and a lot of cheese on the table. Everyone was happy.

That is where the entire picture disappears, shuts down.

My grandma is, unfortunately, deceased, but as a memory of her, I am going to make cheese peppers by her completely unique recipe with the taste of her kitchen. 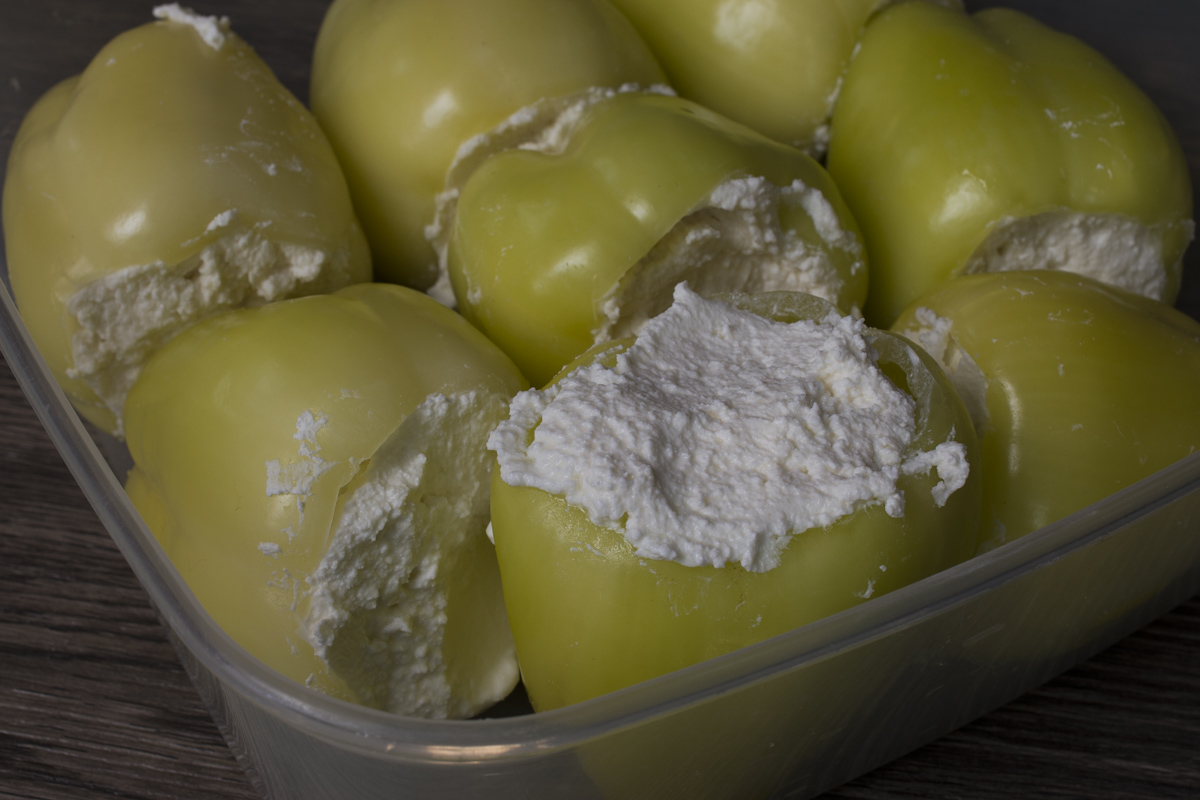 You will only need peppers, cheese, salt, whey and a plastic box or a wooden barrel for this recipe.

These were my peppers from the second round, just to see what my improvisation looked like: 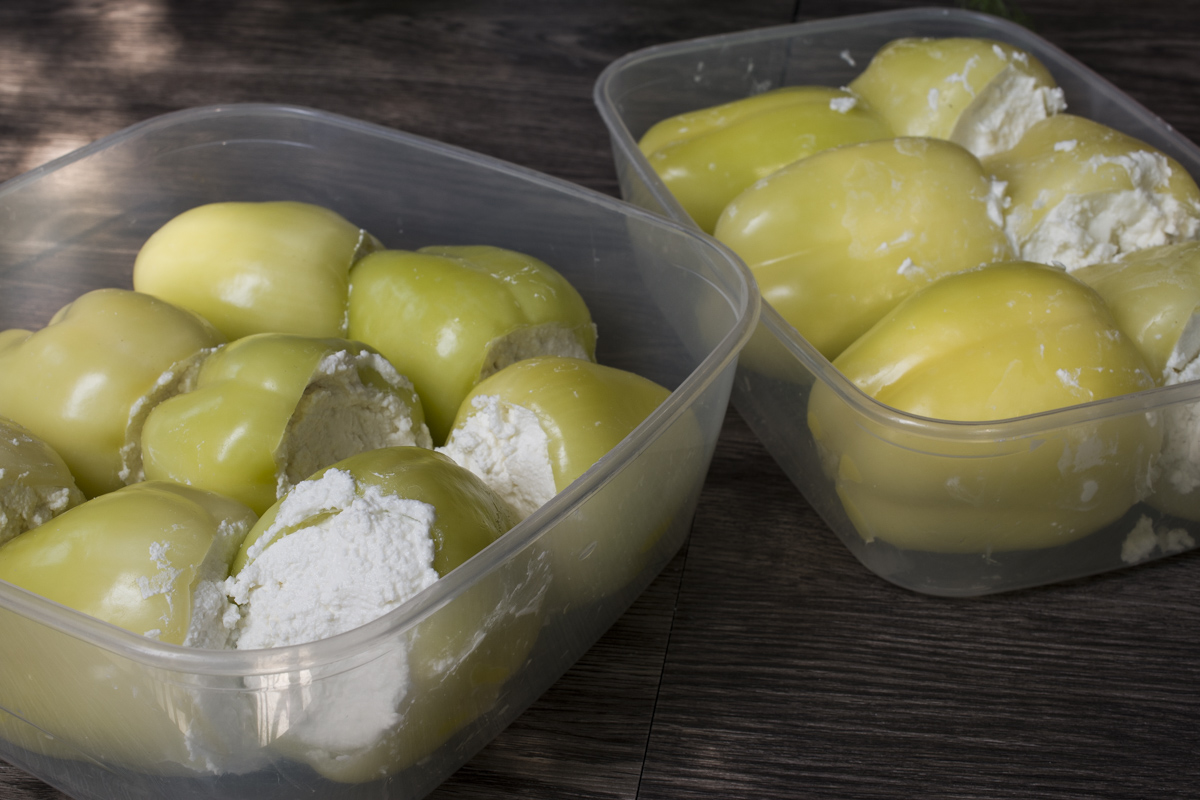 You can use any kind of cheese. It doesn’t matter if it’s crumbled or as a piece. You can even use the young cheese.

I used Urdă (whey cheese), just like she used to. Urdă is a kind of cheese made of whey by heating it. One of the recipes is here. I didn’t prepare it, because you can find it on the green market.

Peppers, small bell peppers (I didn’t use the Hungarian bell pepper, because my family doesn’t like hot, but you certainly can), of the same dimensions, I washed them, removed the petals, seeds and pierced their bottom (making a small hole), so that the whey could easily to pass when I stuff them and cover with liquid.

I made the fermentation liquid out of whey and salt. You can buy whey in supermarkets. When you make the mixture of whey and salt, you shouldn’t get a very salty combination. Pay attention to the amount of salt the cheese contains.

Use salt to your liking in this recipe.

These are peppers from the first round, and they survived the first seven days. My grandma would be proud. 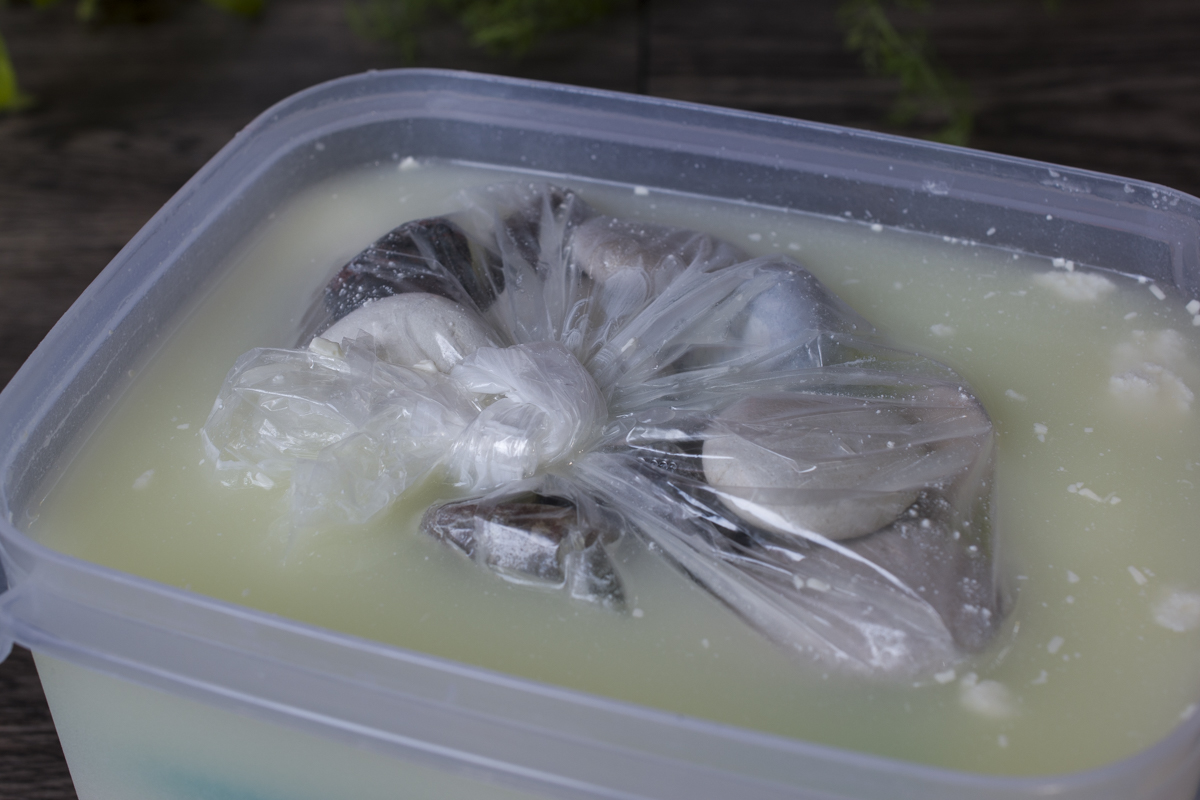 Peppers have to be under the liquid. So you need to find a way to press them hard enough.

I had to come up with a solution, so I used the lid of the other plastic box, a clean plastic freezer bag and some pebbles from the sea.

Put clean pebbles into a plastic bag. Tie the bag in a tight knot. That can work as an improvised weight, if you can’t find a better solution. Put the pebbles in the bag onto the other lid of the box which would be of such dimension that it can cover and press all of the peppers at the same time (like in the picture). 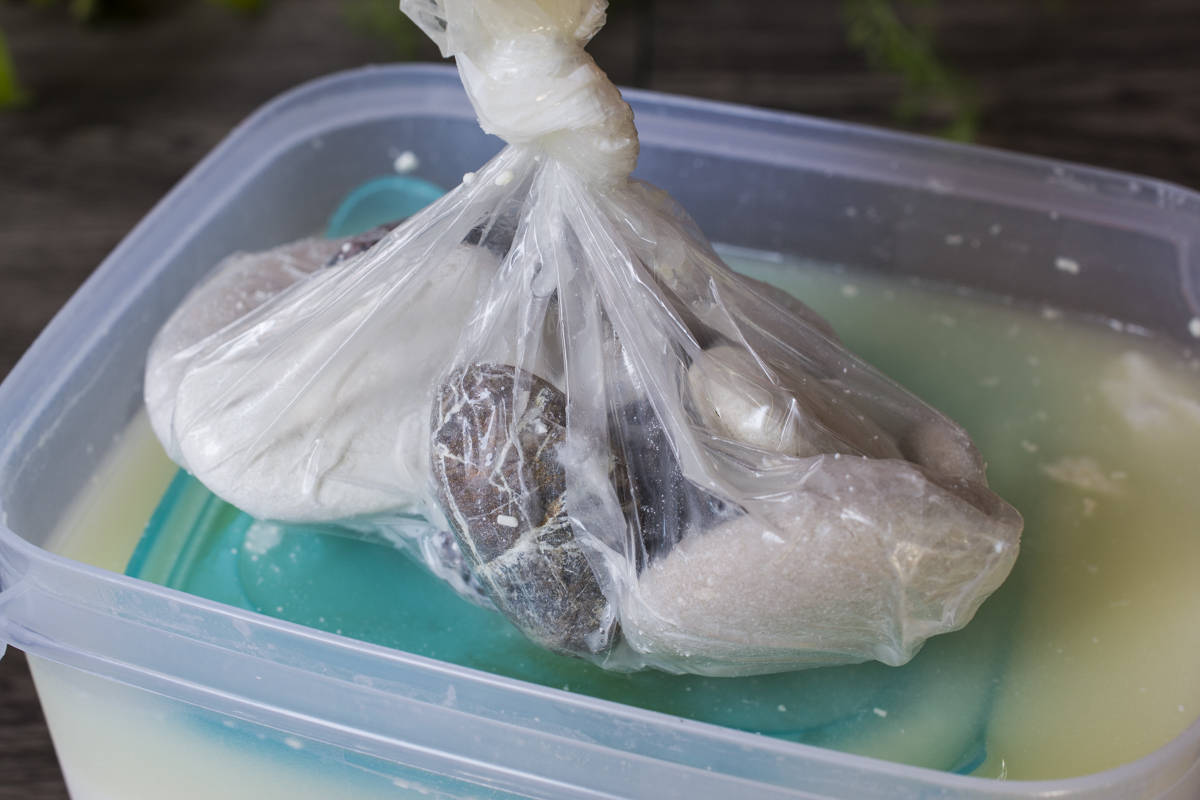 When are they ready?

Covered peppers should be in a cold and dark place for 3-4 weeks. 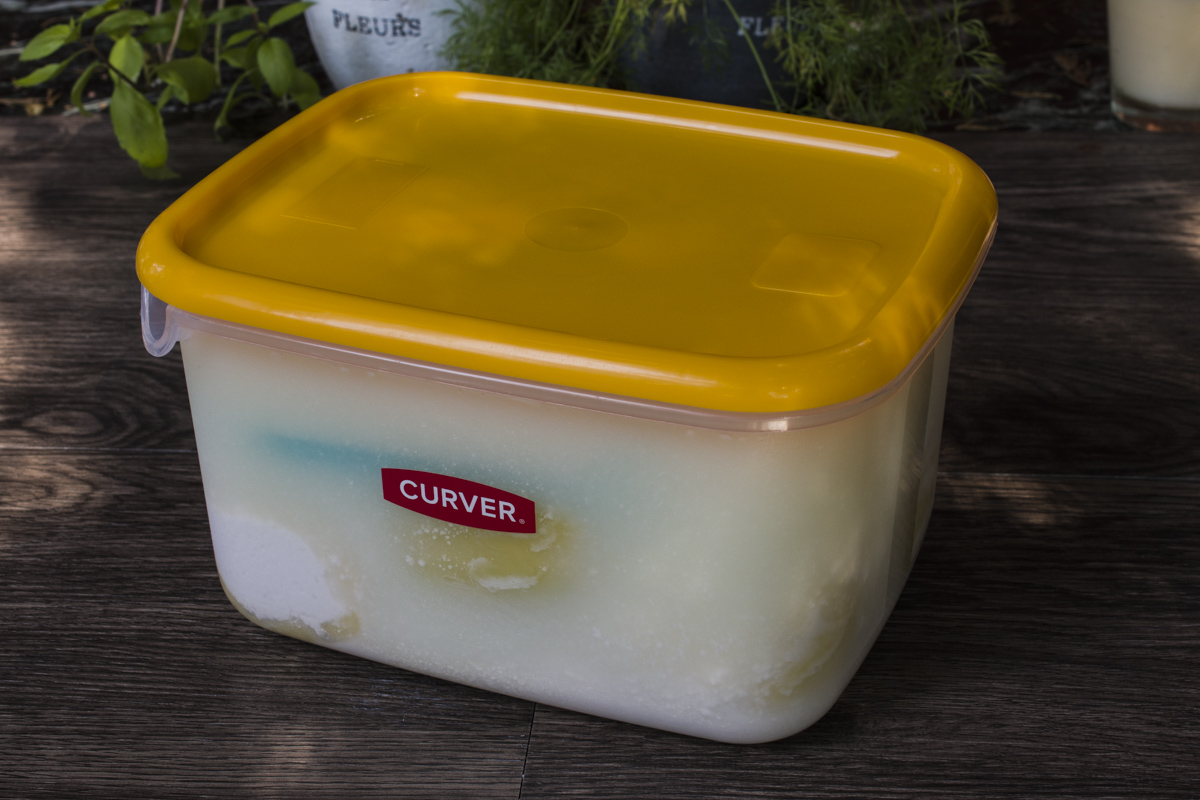 You don’t necessarily have to put them into the fridge, you can also put them in the basement if the temperature is low enough.

Be sure to check them often, so that nothing goes wrong. If whey seems suspicious after a couple of days, change it.

This is what they looked like after 7 days in fermentation liquid. 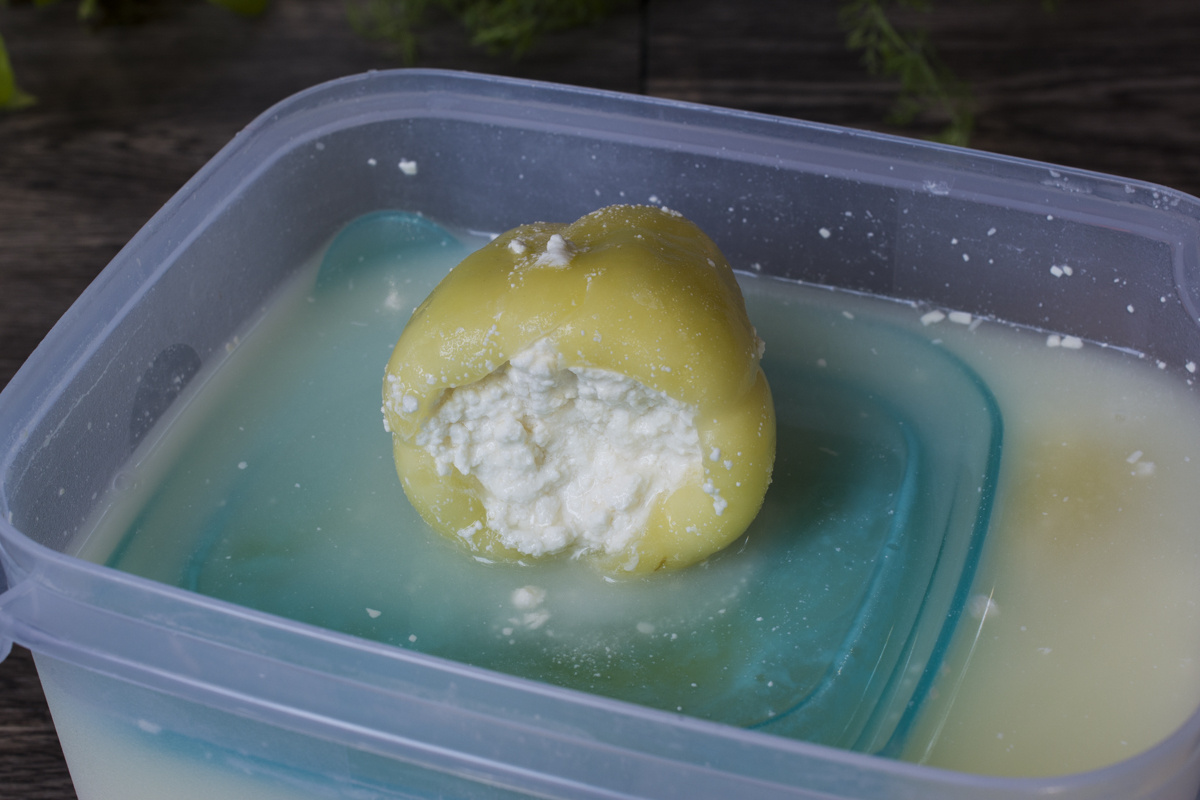 We tried one and they were delicious, but they had to spend some more time soaked.

How long do you keep them before eating?

If you have your recipe, you can send it and I would be glad to try it.